Five Insights at the Midpoint of the Miami Dolphins' Offseason 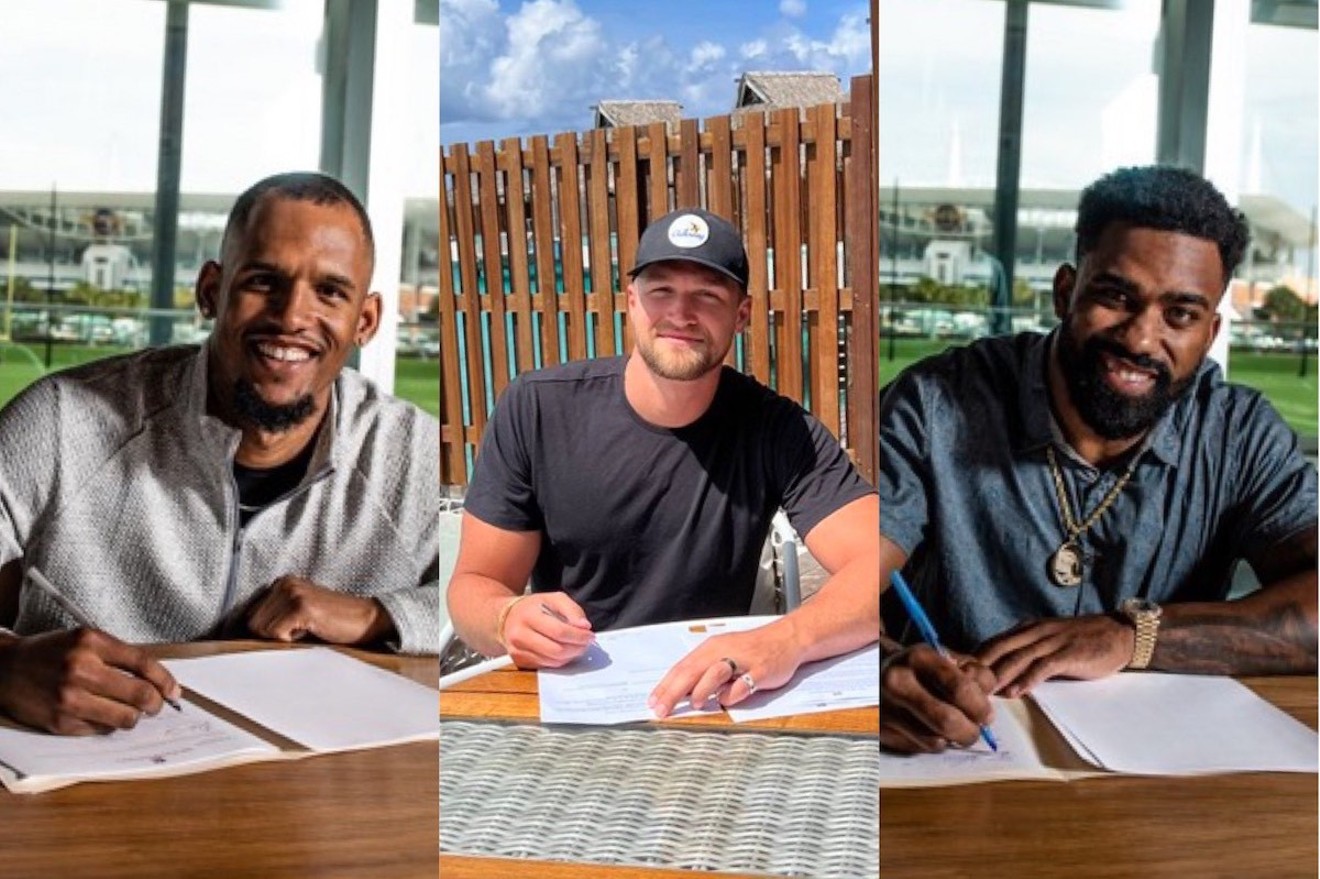 This offseason, Cedric Wilson, Mike Gesicki, and Raheem Mostert signed contracts with the Miami Dolphins. Screenshots via @MikeGesicki, @MiamiDolphins/Twitter
With the NFL draft a little over a month away and the Miami Dolphins free-agency signings trickling in, fans are beginning to get a clearer picture of what the 2022 team will look like. More important, it's becoming apparent what the team wants to look like next season and what areas they decided to address right away to take a step toward it.

Training camp is still months away, but as we near the midpoint of another important Dolphins offseason, it's time to take stock of what we've learned.


Signed and sent back from Bora Bora.
The Show Goes On In South Florida. . .
🤐 pic.twitter.com/RslfBeSo36

There were legitimate concerns that Dolphins tight end Mike Gesicki wouldn't return to Miami next season — or, at the very least, that he'd put up a stink about being labeled a tight end when it came time to receive the franchise tag. Instead, Gesicki decided not to fight the designation and will be returning on a one-year deal.

As you can tell by the emoji in the tweet above, he may have signed the contract, but that doesn't mean he's thrilled about it. His play on the field is much more aligned with wide receivers, who are paid a boatload more. You can bet this won't be the last of that conversation. But, for now, he's back.

Running Backs Are a Priority

If one thing is incredibly clear this offseason, it's that the Dolphins knew they absolutely had to revamp their stable of running backs. So far, mission accomplished.

New head coach Mike McDaniel now has Chase Edmonds and Raheem Mostert to get the ball to, which represents a massive upgrade over last year's options. The previous starter, Myles Gaskin, will likely still be involved, just in a lesser way. Mostert is a game-changer, and he comes from the 49ers, where McDaniel was offensive coordinator last season, so there's already a history there.

Wide Receivers Must Be Versatile

The Dolphins already have a pair of nice wideouts in Jaylen Waddle and DeVante Parker, but they bolstered their position with the addition of versatile, game-breaking ex-Cowboys wide receiver Cedric Wilson. Wilson is a stretch-the-field asset, and he's someone who's comfortable with Mike McDaniel's brand of trick plays and outside-of-the-box schemes.

When your organization hires an offensive savant as its new head coach, it must ensure he has all the right tools in his toolbox. Cedric Wilson seems like a sure bet to deliver everything Will Fuller failed to last year in Miami.


So Dolphins keep their entire front 7 together, for now. McCourty and Coleman the only FA defenders who haven't resigned. https://t.co/DlsEa8HFlb

The Dolphins obviously prioritized bringing back as much of their solid defense as possible next season, and so far, so good. The signing of multiple defenders — including Emmanuel Ogbah on a four-year, $65 million dollar deal — means fans know what to expect on the team's most promising side in 2022.

The caveat to this, of course, is the return of All-Pro cornerback Xavien Howard, who is requesting a new contract after another ridiculously good season. In addition, fellow high-priced cornerback Byron Jones is coming off an offseason surgery and could become a cap casualty this summer.


This Is Tua's Last Chance

The Dolphins have done everything to support their third-year quarterback this offseason, especially with the additional offensive-line help. However, with the signing of backup Tedd Bridgewater, the Dolphins have made it abundantly clear that Tua Tagovailoa is on a short leash. With a new head coach, new players, and a much more supportive environment, Tagovailoa should be able to succeed this season.

If he doesn't, this will likely be the last fans will see him in Dolphins garb. Bridgewater will be a very popular option if Tua fails. In fact, Bridgewater already is, and we're six months away from the start of the new season.
KEEP NEW TIMES BROWARD-PALM BEACH FREE... Since we started New Times Broward-Palm Beach, it has been defined as the free, independent voice of South Florida, and we'd like to keep it that way. With local media under siege, it's more important than ever for us to rally support behind funding our local journalism. You can help by participating in our "I Support" program, allowing us to keep offering readers access to our incisive coverage of local news, food and culture with no paywalls.
Make a one-time donation today for as little as $1.