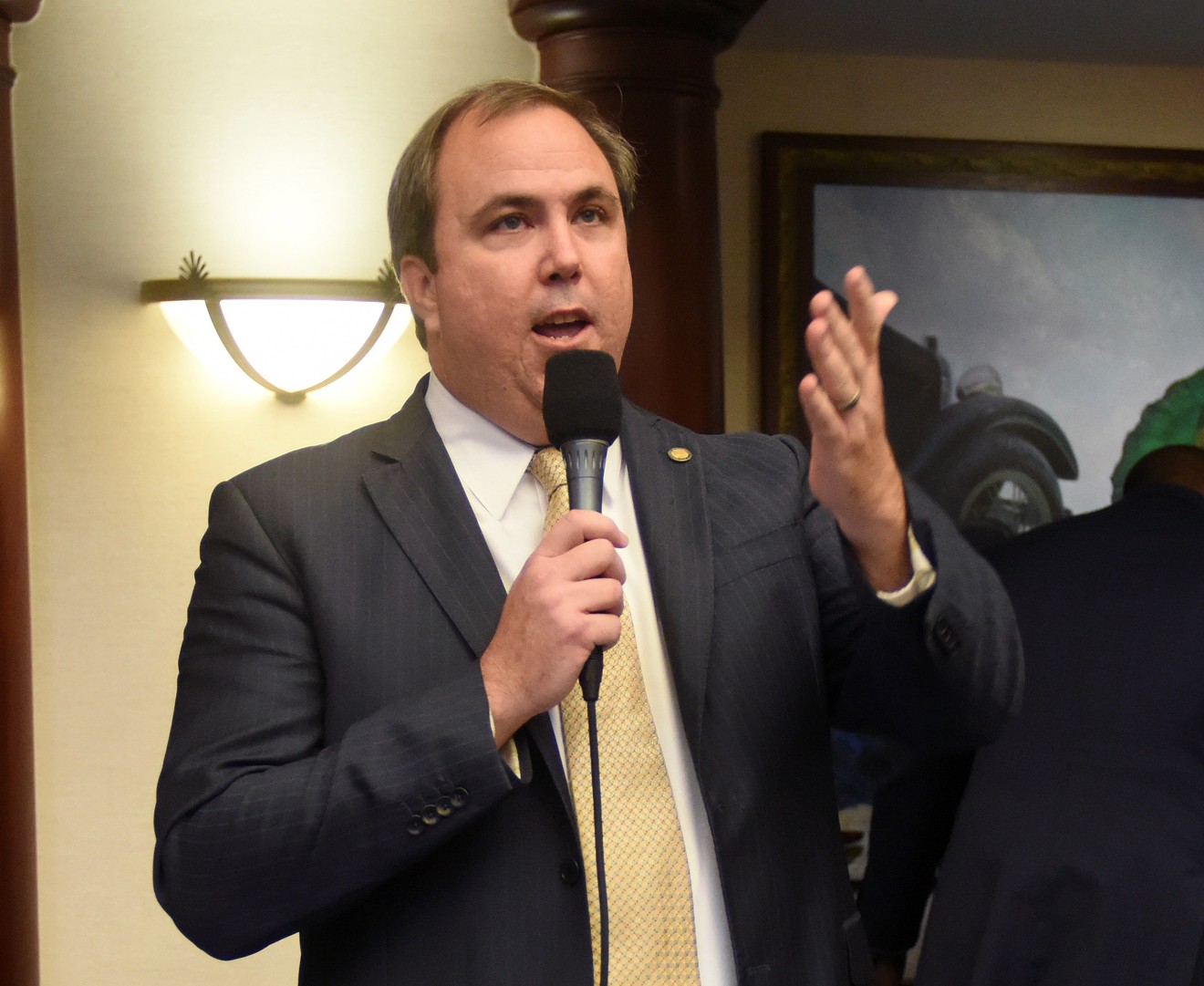 State Sen. Joe Gruters Florida House of Representatives
The modern anti-immigrant movement in America was largely created by white nationalists and eugenicists. Among the nation's loudest voices is the Federation for American Immigration Reform, or FAIR, a group founded in 1979 by John Tanton, a doctor who believed in eugenics. Tanton received funding from his friends at a group called the Pioneer Fund, which has propagated the idea blacks are genetically inferior to whites.

Fast forward roughly 40 years, and groups affiliated with FAIR are now advising Florida lawmakers on anti-immigrant proposals. According to emails obtained yesterday by the News Service of Florida, State Sen. Joe Gruters — who is also the chair of the Florida Republican Party — has been communicating behind the scenes with members of a FAIR-linked group, Floridians for Immigration Enforcement (FLIMEN), about SB 168, a Gruters proposal that would force towns to cooperate with Immigration and Customs Enforcement. Among other items, FLIMEN sent Gruters' office a list of 15 towns the group nonsensically calls "anarchy cities" because of allegedly lax immigration standards. (Miami is not among them, but West Palm Beach and Key West are.)

FLIMEN "suggests you consider not widely distributing the list, as that would just create problems,” the group reportedly emailed Gruters.

Amazingly, information from FAIR and another of FAIR's sister organizations, the Center for Immigration Studies, also appeared in a staff analysis of the bill, which is publicly available online. According to the document, Gruters' office used info from FAIR and the CIS to accuse multiple cities of still operating as "sanctuary" jurisdictions in Florida, even though none actually exist:

Florida Senate
FAIR-linked groups have been lobbying the state Legislature for years: This past February, the Southern Poverty Law Center obtained emails showing FLIMEN has been emailing state legislators since at least 2016. That year, the group corresponded repeatedly with Jacksonville State Sen. Aaron Bean, who is still in office. The SPLC obtained emails showing FLIMEN sent Bean's office copies of draft legislation for two bills. One proposed forcing employers to perform E-Verify citizenship checks on potential new hires — a proposal that has not worked in other states and has slowed the hiring process for many U.S.-born workers. FLIMEN also sent Bean's office a copy of an anti-sanctuary-city crackdown.

The SPLC noted the "draft legislation" sent to Bean's office closely matches what Gruters is currently proposing with SB 168. (In 2018, FLIMEN endorsed Gruters, who chaired Donald Trump's 2016 campaign in Florida.)

FAIR and the CIS' histories are long and ugly. Both groups spend a great deal of time and energy laundering hateful, anti-immigrant, and particularly anti-Latino ideas. But Tanton's initial goals were clear: He once said, "For European-American society and culture to persist requires a European-American majority and a clear one at that." The SPLC noted Tanton was quite interested in the (discredited) idea that one could "breed" the human race, and that "white, European" genes were superior to all others. According to the SPLC, Tanton in the 1960s even once inquired as to whether forced sterilization was legal in Michigan. In 1986, Tanton wrote that America was being subjected to a "Latin onslaught" and that Central and South Americans were of "low educability." Through the 1990s, Tanton regularly corresponded with white nationalists and questioned whether Latinos were "capable" of governing California.

According to the Anti-Defamation League, other people affiliated with FAIR and CIS have also endorsed eugenics and scientific racism. Donald Collins, who sits on FAIR's board of directors, has written for the white-nationalist website VDARE.com. While FAIR, the CIS, and other groups affiliated with Tanton's ideology deny they are racist, critics note the group's proposed policies would restrict black and brown immigration to the United States.

Members of FLIMEN even showed up in Tallahassee earlier this month to speak in favor of the bill. After it sailed through the House Infrastructure and Security Committee, immigrant-rights activists reportedly chanted "Shame on you!" as Gruters left the room.
KEEP NEW TIMES BROWARD-PALM BEACH FREE... Since we started New Times Broward-Palm Beach, it has been defined as the free, independent voice of South Florida, and we'd like to keep it that way. With local media under siege, it's more important than ever for us to rally support behind funding our local journalism. You can help by participating in our "I Support" program, allowing us to keep offering readers access to our incisive coverage of local news, food and culture with no paywalls.
Make a one-time donation today for as little as $1.