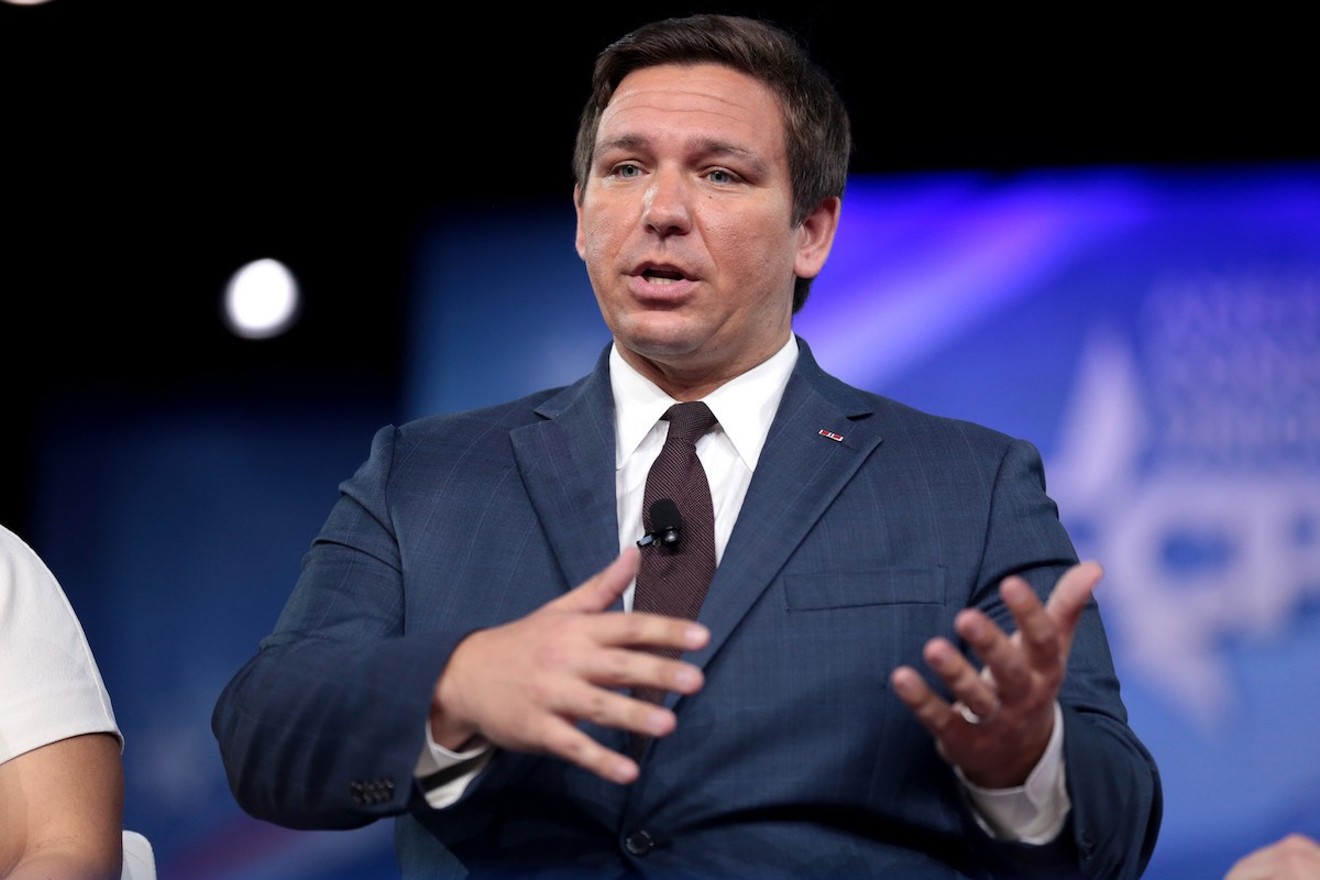 Florida Gov. Ron DeSantis photo by Gage Skidmore/Flickr
Floridians get a bad rap for being loud-mouthed and crazy, but some of them just like to speak their minds, politeness be damned. Like the guy who yelled obscenities at Gov. Ron DeSantis at a Publix yesterday. It doesn't get more Florida than that.

Yesterday morning, DeSantis held a COVID-19 press conference outside a Publix in Jupiter, but before he even got started, a man in the crowd yelled, "Asshole!" The remark was broadcast on the Florida Channel's live feed of the event.

Florida Politics publisher Peter Schorsch tells New Times the expletive came as DeSantis was walking from the gubernatorial SUV into the store prior to the press conference. The Florida Channel then cut the feed until the governor reached the podium and began speaking about the state's vaccination rollout.


.@FloridaChannel live mic picks up man yelling “asshole” near/at @GovRonDeSantis, who is about to speak at a @Publix in Jupiter.

.@GovRonDeSantis is in Jupiter for another covid 19 vaccine update. He appears to be late.

And someone just screamed “a——hole” at the podium.

What happened yesterday isn't the first instance of a Floridian airing a grievance with the governor the best way they know how: with a well-placed expletive.

In 2016, former Lake Worth commissioner and activist Cara Jennings was recorded confronting then-Gov. Rick Scott in a Gainesville Starbucks with her own litany of contempt, starting with the magic word.

"You're an asshole!" Jennings told Scott in her video tirade, which went viral. "You don't care about working people. You should be ashamed to show your face around here."

DeSantis himself is no stranger to public outbursts. In July, progressive activist Thomas Kennedy interrupted one of the governor's coronavirus press conferences, calling him "an embarrassment" because of his response to the COVID-19 pandemic.

Yes, calling the governor an asshole seems to be on its way to becoming a Florida tradition. If only there were a video replay we could watch while eating a Publix chicken tender sub.
KEEP NEW TIMES BROWARD-PALM BEACH FREE... Since we started New Times Broward-Palm Beach, it has been defined as the free, independent voice of South Florida, and we'd like to keep it that way. With local media under siege, it's more important than ever for us to rally support behind funding our local journalism. You can help by participating in our "I Support" program, allowing us to keep offering readers access to our incisive coverage of local news, food and culture with no paywalls.
Make a one-time donation today for as little as $1.