screencap via YouTube
Sometimes, bros will be bros. Pranks will be played, and shenanigans will take place. Sometimes, though, bros being bros can go horribly wrong, especially when alcohol is involved and those bros joke about ISIS on social media.

Two Delray Beach roommates recently learned this lesson the hard way when they found themselves under investigation by Venmo — the digital wallet that lets you make and share payments with friends — after writing something very anti-MAGA in the space where users are asked to include a reason for payment.

We could explain, but it's probably better you get the story straight from the horse's mouth via the Twitter thread of one "El Duderino," a 29-year-old construction manager who lives in Delray Beach:


Well apparently venmo didn't find that as funny as we did. They suspended his acct and mine and he's barred from sending me money again


They're gonna go through our history of payments and see the memos and well..out of context they sound bad 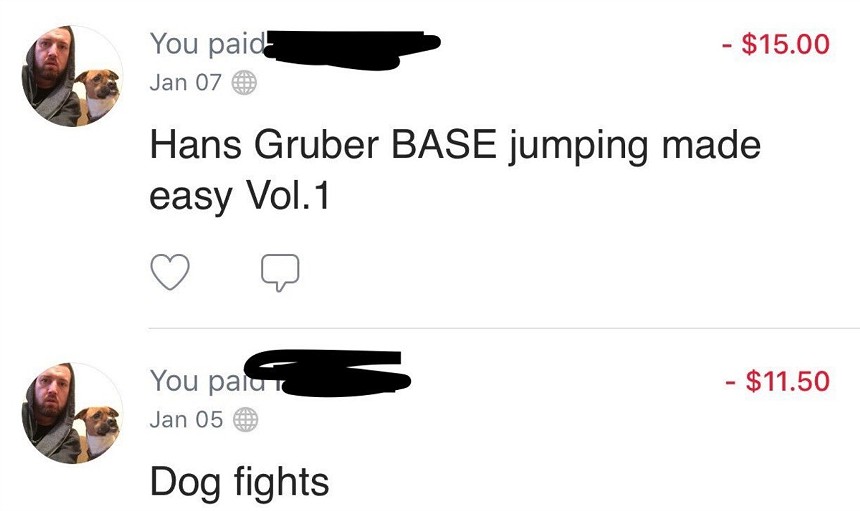 via Twitter
File these under "jokes that sound better after a night of drinking." According to the recipient of "ISIS support" money, he didn't believe Venmo had taken enough interest in their minuscule banking shenanigans to actually cause a problem.

"We were drinking at HJ O'Connor's Pub in Delray," says the Twitter user, who asked New Times not to publish his real name, but who provided screenshots of his emails with Venmo about the problem. "The bill was $30, so the next day my roommate sent me $15 through Venmo. The next day he got an email about our accounts being locked and under investigation because he was the one that sent the payment/wrote the memo. I thought he was lying, but he said he was serious and showed me the email. We both burst out laughing hysterically."

He adds that both of their accounts are still locked pending proof the two weren't actually sending ISIS enough money to see the new Spider-Man movie.

"Venmo had emailed my roommate asking for proof to verify the claim that the $15 payment was made as repayment for our bar tab. We recently heard back from Venmo, and after emailing back and forth with both of us, they cleared us and sent the payment through," he says. (Venmo's press office didn't immediately respond to questions from New Times.)

"El Duderino" says he and his roommate will definitely tone down their Venmo standup routines.

"We'll still use Venmo and write each other outrageous memos," he says, "but in the future, we are definitely going to pump the brakes on mentioning ISIS anywhere."

Update 11:16: Venmo sent the following statement about the suspended account:


PayPal and Venmo take regulatory and compliance obligations seriously, including U.S. economic and trade sanctions administered by the U.S. Department of the Treasury’s Office of Foreign Assets Control (OFAC). We’re always working to make it safe and easy for people to send and receive payments to and from those they trust. Our goal is to deliver as seamless of a payments experience as possible while we do our job to keep PayPal, the public, and our customers safe. We realize any delay in making or receiving a payment can be frustrating, and we appreciate our customers’ patience as we comply with our regulatory obligations.