Two QAnon-linked congressional candidates made it onto November ballots in Florida. Photo by Anthony Crider/Flickr
It's safe to say that QAnon conspiracy-aligned candidates haven't fared too well this election cycle.

Among the congressional candidates who have affiliated themselves with QAnon — a sprawling web of far-right conspiracy theories — the majority either lost their primary races or dropped out.

The trend has held true in Florida: While 14 of the 65 congressional candidates who previously endorsed, promoted, or lent credence to QAnon are from the Sunshine State, according to nonprofit watchdog Media Matters, most have failed in their election bids, including Miami's Lavern Spicer and Anthony Sabatini of Howey in the Hills.

Still, two candidates in Florida with links to the QAnon movement have made it onto the November ballot: Christine Scott and Carla Spalding.

Scott, who was born in California and is a self-described moderate, is running in Florida's newly redrawn 23rd Congressional District, which includes coastal areas stretching from Fort Lauderdale to Boca Raton, as well as Coral Springs and other communities in west Broward County. She has qualified for the general election as a no-party-affiliation candidate.

In 2020, she tried to run as a Republican in Florida's former 22nd Congressional District, but local election supervisors rejected her candidacy on the grounds that she didn't gather enough valid voter signatures to qualify. In a failed federal lawsuit against local election officials, she claimed there was a concerted plot to reject her petition signatures and exclude her from the race.

As evidenced by an image captured for posterity on the Internet Archive's Wayback Machine (see screenshot below), the homepage of her 2020 campaign website featured the QAnon slogan, "Where We Go One, We Go All."

In April 2021, an account on the far-right platform Gab that purportedly belonged to Scott posted about an alleged meeting with former national security adviser Michael Flynn in which she recalls telling Flynn about her candidacy: "I'm running. I'm a warrior. Thank you for being Q."

The Internet Archive's Wayback Machine captured this image of Christine Scott's campaign website in 2020.
Screenshot via Internet Archive
QAnon conspiracy theories stem from an elaborate mythology in which Donald Trump is at war with a global cabal of Satanic child molesters. A series of internet message board posts by "Q," a supposed high-level government source, fueled the mythology in its early stages in 2017. The movement has grown from a fringe group of believers into a mass social phenomenon: four percent of Americans said they support QAnon in a rolling poll posted by Civiqs.

While other candidates have walked back their affiliations or claimed not to know "what the fuck" QAnon is, Scott has doubled down on her support of the conspiracy theories, according to a July 28 report on the website Grid News.

"Q is right and I like the [poignant] phrase: Where We Go One, We Go All!" Scott reportedly told the outlet. "Yes, I absolutely stand by it, just like I stand by my love for family, my flag and my country...and Rocky Road Ice Cream!”

Scott describes herself as a small business owner. Her candidate profile says she is concerned that small businesses are "being ripped away from owners by rogue and unruly monopolies and tech tyrants."

In the race for the 23rd District seat, she's is facing off against Republican Joe Budd, Mark Napier (no party affiliation), and Democrat Jared Moskowitz, who was the head of Florida's Division of Emergency Management at the onset of the COVID pandemic.

Spalding is a Republican running in Florida's 25th Congressional District, which encompasses Hollywood, Dania Beach, and parts of western Broward County. She won her August 23 primary election and is slated to once again face U.S. Congresswoman Debbie Wasserman-Schultz in the general election, whom she unsuccessfully ran against in 2020.

Like Florida's 23rd District, the 25th lies in an area that leans heavily Democratic.

Spalding was born in Jamaica and immigrated to the U.S. at age 18, according to her campaign profile. She served in the U.S. Navy before working as a registered nurse between 2009 and 2015 at various hospitals in Palm Beach County, including the VA Medical Center in West Palm Beach, according to her profile says.

According to Media Matters, Spalding is one of 14 QAnon-linked candidates nationwide, including Colorado’s Lauren Boebert and Georgia’s Marjorie Taylor Greene, who secured a spot on the upcoming general election ballot by way of a primary election.

"As a Congresswoman, I promise to defend our Freedom, protect our children from predators, secure the border, and most importantly I WILL DRAIN THAT SWAMP!" reads a bio on Spalding's campaign site.

In a since-deleted tweet from 2018, Spalding reportedly shared the QAnon slogan "#WWG1WGA," and in 2020, she appeared in a since-deleted YouTube video hosted by QAnon conspiracy theorist Cirsten Weldon, who died in January of COVID after vocally opposing vaccination and calling for the execution of White House chief medical advisor Anthony Fauci.
KEEP NEW TIMES BROWARD-PALM BEACH FREE... Since we started New Times Broward-Palm Beach, it has been defined as the free, independent voice of South Florida, and we'd like to keep it that way. With local media under siege, it's more important than ever for us to rally support behind funding our local journalism. You can help by participating in our "I Support" program, allowing us to keep offering readers access to our incisive coverage of local news, food and culture with no paywalls.
Make a one-time donation today for as little as $1. 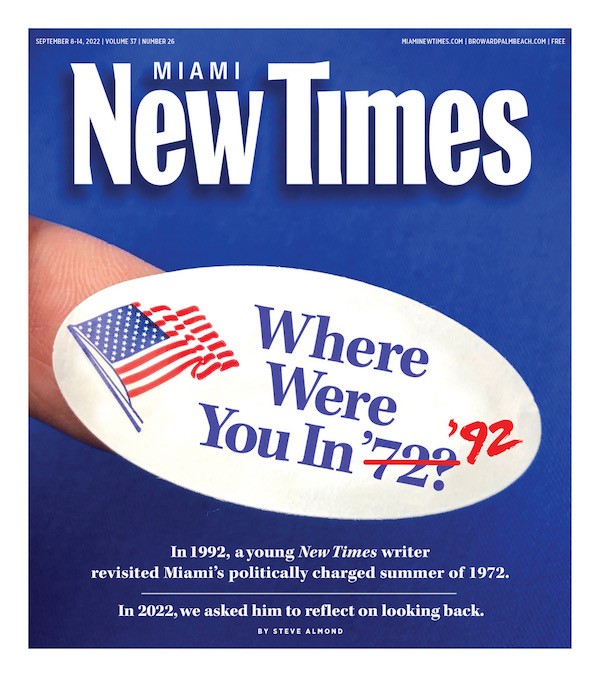