Floridians Can Buy Thousands of Guns Online With No Background Checks 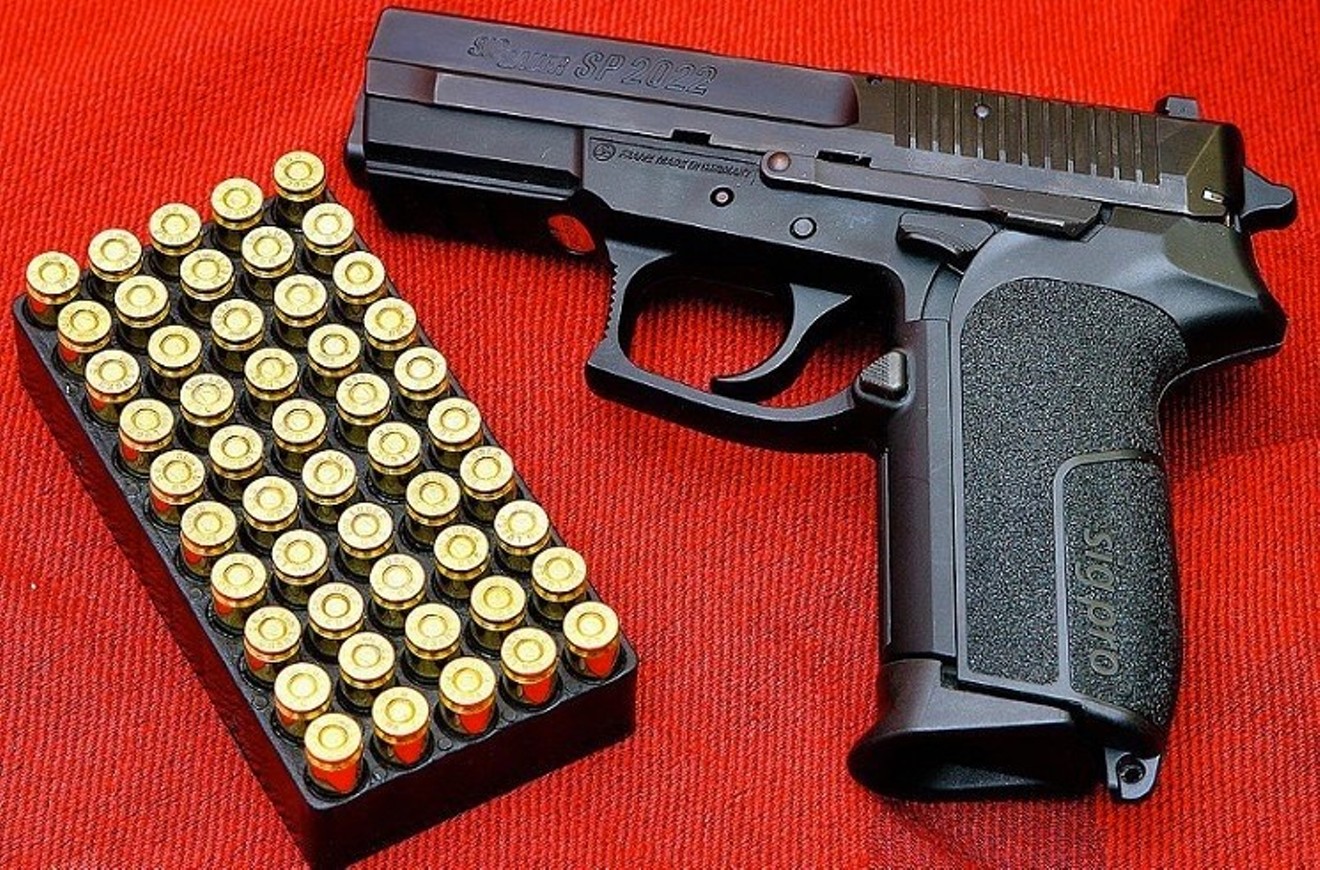 Photo by Augustas Didžgalvis / Wikimedia Commons
Just yesterday, alt-right hero and white-supremacist ally Florida congressman Matt Gaetz tried to kick two parents of Parkland shooting victims out of a federal gun-violence hearing. The video footage of the event, captured by CSPAN, is insane. Gaetz conducts himself like a petulant child. Moreover, the whole reason Manuel Oliver and Fred Guttenberg interrupted Gaetz was the lawmaker had made an absurd and utterly insulting claim: Donald Trump's "border wall" will curb gun violence in America.

Had Gaetz's brain not been damaged from time spent on alt-right Reddit threads and hanging out with gun lobbyists, he might have realized there's a much simpler reason for all the gun violence in America today: It's ridiculously easy to get a firearm. A study released yesterday found 93,497 ads online for guns in Florida in which online sellers didn't ask for background checks.

Everytown for Gun Safety, a national gun-safety group, cataloged a year's worth of posts on ArmsList.com, a sort of Craigslist for murder weapons. It seems people who've been banned from having guns for all sorts of reasons can easily buy them right now on ArmsList.

"In 2018 alone, nearly 1.2 million ads were posted on Armslist.com for firearm sales where no background check was legally required," the group wrote yesterday. "This vast volume of ads provided criminals and domestic abusers with ready opportunity to get armed without a background check." (Everytown also found 1.5 million ads from unlicensed sellers on ArmsList.)

Everytown says ArmsList is a hub for prohibited buyers: Nearly one in nine customers on ArmsList had histories that should have prevented them from buying guns in their state, the group says. That's a rate much higher than the general population.

Not every state demands that unlicensed sellers conduct background checks. Florida is, obviously, one that doesn't. Everytown found that one in seven Armsllst shoppers in Florida would otherwise be prohibited from buying firearms due to criminal histories, patterns of domestic abuse, threats to others, or mental-health issues. Of the eight states studied, Florida had the highest rate of prohibited purchasers on ArmsList. Everytown contends the Sunshine State could easily adopt laws that would force unlicensed sellers to check buyers' histories before handing them guns.

According to the study:


Critics of background check laws claim they will not make a difference in how guns are sold. But our investigation found that the laws matter. Unlicensed sellers in states that have passed background check laws show a high degree of compliance — 84% of the 55 sellers contacted expressly stated the sale would need to be completed at a dealer or with an appropriate permit to purchase. However, where there was no law on unlicensed sales, only 6% of the 95 sellers contacted by investigators indicated they would require a background check on their sales.

Everytown for Gun Safety
The investigation comes as Florida still debates how much it wants to crack down on gun violence after the February 2018 massacre at Marjory Stoneman Douglas High School, in which Nikolas Cruz murdered 17 students and teachers with an assault-style rifle. After the shooting, Florida's Republican Legislature raised the age limit to buy guns from 18 to 21. It also enacted a new "red-flag" program that lets courts temporarily take guns away from people who might be dangerous. A 2018 New Times investigation found the law allowed confiscation of weapons from people who'd threatened racist attacks, domestic violence, or school shootings.

But now, some of Florida's more right-leaning lawmakers are talking about repealing those laws. Panhandle Rep. Walter "Mike" Hill this year filed a bill that would, if enacted, reverse every single gun-safety law put in place after the Parkland killings. (Hill, a black man, also filed a bill this year to ban the removal of monuments to the white-supremacist Confederacy.) Given how close last year's vote was for the post-Parkland gun-safety restrictions, it's possible Hill's bill could passwnership groups have been crying foul about the new restrictions all year.

But Everytown and its sister organization, Moms Demand Action for Gun Sense, say it's still too easy for dangerous people to purchase weapons online in Florida.

"This investigation highlights the scary truth that Florida is an easy place for people with dangerous histories to get their hands on a gun online,” Gay Valimont, volunteer leader of the Florida chapter of Moms Demand Action, said yesterday in a media release. “That's why we urge our lawmakers to pass statewide background-check legislation. Background checks are the foundation of any comprehensive gun violence prevention strategy and will help to keep our children and families safe, whether at school, home or in the workplace."
KEEP NEW TIMES BROWARD-PALM BEACH FREE... Since we started New Times Broward-Palm Beach, it has been defined as the free, independent voice of South Florida, and we'd like to keep it that way. With local media under siege, it's more important than ever for us to rally support behind funding our local journalism. You can help by participating in our "I Support" program, allowing us to keep offering readers access to our incisive coverage of local news, food and culture with no paywalls.
Make a one-time donation today for as little as $1.