A campaign on the Christian crowdfunding platform GiveSendGo seeks to raise $50,000 to help cover the legal fees of January 6 rioter Mason Courson of Weston (AKA #Tweedledumb). Screenshot via GiveSendGo
To some, Mason Courson is Broward man #Tweedledumb, arrested in late December for his alleged role in the deadly attack to stop the certification of electoral votes at the U.S. Capitol on January 6, 2021.

But, to his mother, Angelica Rea, the 26-year-old is still her "Patriot Son" — at least according to a campaign created in her name on the Christian crowdfunding platform GiveSendGo that seeks to raise $50,000 to help cover Courson's legal fees and other financial obligations. The campaign states that Courson had "no ill intent" when he went to watch then-President Trump speak but wound up in a situation he "never imagined."

"He is a man with a strong Christian faith, an incredible father, son, and brother, and loves his country, believes in freedom," the campaign states, "a true patriot as we are all now called."

Courson's mother didn't respond to New Times' request for comment, and it's unclear when the campaign launched. As of Wednesday evening, no money had been raised.

In the immediate aftermath of the Capitol riot, the popular crowdfunding site GoFundMe announced that it had "removed several fundraisers attempting to challenge the legitimate results of the 2020 election" and would continue to remove any fundraisers that "spread misinformation about the election, promote conspiracy theories and contribute to or participate in attacks on U.S. democracy."

As their loved ones were arrested in connection with the Capitol riot, families and friends turned to GiveSendGo — which bills itself as the "#1 free Christian crowdfunding site" and "a place to fund hope" — to help cover their mounting legal fees. For example, friends and family of Miami-born Proud Boys leader Enrique Tarrio raised more than $113,000 on GiveSendGo after he was arrested for burning a Black Lives Matter banner owned by a historic Black church and possessing high-capacity firearm magazines.

A Washington Post investigation found that 24 people raised at least $247,000 on GiveSendGo to participate in and in connection with various "Stop the Steal" events, including the January 6 rally in Washington, D.C.

GiveSendGo founder Jacob Wells tells New Times the company hosts fundraising campaigns for all people, "including the ideological right and left," and that its mission to "share the hope of Jesus" applies to everyone.

"There are many campaigns on GiveSendGo that we do not agree with, but we allow them because they are legal endeavors," Wells writes in an emailed statement. "We have an opportunity to share the hope we have with them."
click to enlarge 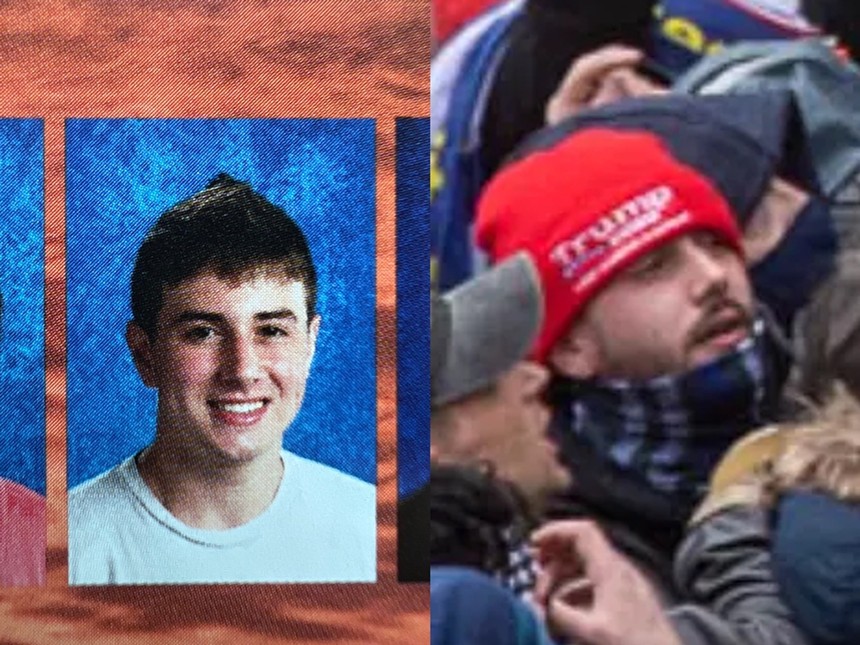 Mason Courson's Cypress Bay High yearbook photo beside the image shared by the FBI.
Photo by Alex DeLuca/Courtesy of FBI
Courson, who grew up in Weston and moved to Tamarac in the past year, was arrested by U.S. Marshals in late December. According to a November 17 federal indictment, he faces eight federal charges, including assaulting, resisting, or impeding officers and inflicting bodily injury, civil disorder, and entering and remaining in a restricted building or grounds with a deadly or dangerous weapon.

He is also accused of joining the mob of rioters chanting, "Heave, ho!" as they bashed their way into the Capitol, leaving D.C. Metropolitan police officer Daniel Hodges crushed and bleeding between two doors.

Last month, the Baptist Joint Committee for Religious Liberty and the Freedom From Religion Foundation released a report titled "Christian Nationalism and the January 6, 2021 Insurrection," which examined how Christian nationalism — the belief that America should be a Christian nation — fueled the deadly attack "in a horrific and previously unthinkable way to threaten American democracy," and notes the heavy use of Christian imagery and symbolism at the Capitol that day.

Sister Robin Haines Merrill, an artist and Christian missionary based in Fort Lauderdale, condemns the violent attack on the U.S. Capitol. She believes that as America grows more diverse, some Christians are lashing out — as they did at the Capitol on January 6.

"It's because they [Christians] are becoming a minority," Merrill tells New Times, "People feel that might is right, and the notion of manifest destiny, that God gave Christians this country, and therefore, they need to do whatever they can to keep it by force."

Last month, Courson's attorney filed a motion requesting a transfer from the Northern Neck Regional Jail in Warsaw, Virginia, to the D.C. Department of Corrections. Courson has a status conference scheduled for April 7.

According to the campaign page, once Courson's case is settled and he returns home, any "blessings"  that are received will be used to assist other families in "similar situations."
KEEP NEW TIMES BROWARD-PALM BEACH FREE... Since we started New Times Broward-Palm Beach, it has been defined as the free, independent voice of South Florida, and we'd like to keep it that way. With local media under siege, it's more important than ever for us to rally support behind funding our local journalism. You can help by participating in our "I Support" program, allowing us to keep offering readers access to our incisive coverage of local news, food and culture with no paywalls.
Make a one-time donation today for as little as $1.