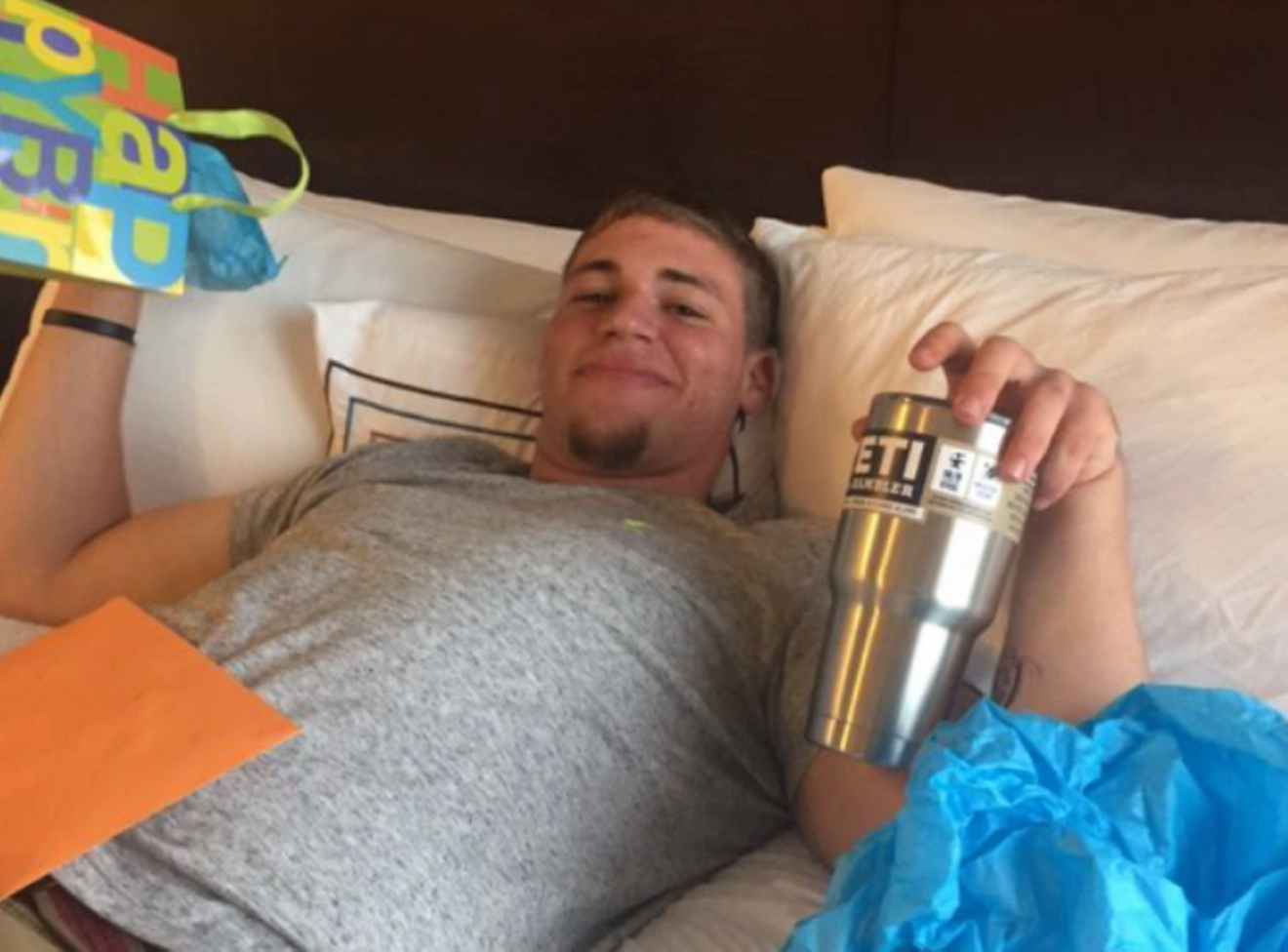 Barbara Dziedzic says her son, Joshua Dziedzic, died of a venous air embolism caused by improper removal of his catheter at Palms West Hospital. Courtesy of the Dziedzic family
Barbara Dziedzic struggles to hold back tears as she recounts the moment her 25-year-old son, Josh, collapsed in a chair at Palms West Hospital after a seemingly routine IV line removal. She propped up his trembling body as best she could until the medical staff arrived and tried to prevent him from slipping into a coma.

But it didn't work. Almost immediately after the line was pulled out, Josh began gripping his chest and complaining of trouble breathing. His oxygen levels plummeted, and he started convulsing. One of the first questions the doctor asked the nurse upon rushing in was whether she had just removed the central catheter, Barbara recalls today. Josh never regained consciousness. He was taken off life support August 22, 2016, after a long procession of friends and family filled his hospital room to pay their last respects.

According to a lawsuit filed recently by the Dziedzic family, Palms West perpetrated a coverup to conceal the medical mistake that triggered Josh's sudden deterioration. The hospital staff allegedly came up with a false narrative that Josh was dying of "broken heart syndrome" because he felt bad about relapsing into his addiction to opioids, which was the cause for his admission to the sprawling 94-acre medical center. The bogus explanation took a toll on the family, the lawsuit says: It led his loved ones to believe they had not done enough to reassure Josh that they supported him.

"They brought us down a path that was just a lie," Josh's father, Paul Dziedzic, says.

It was not until the county medical examiner corrected the hospital-listed cause of death that the Dziedzics discovered their son had died from a preventable medical error: a burst of air that had entered his vein due to improper removal of a central catheter line.

An investigation by the Florida Agency for Healthcare Administration in 2017 found that Palms West failed to report the death as a medical accident, even after receiving the autopsy findings. During an agency interview, Palms West's ICU director "stated that she did not discuss this incident with the 'higher-ups such as the Vice President of Quality,'" according to the investigation documents.

Palms West Hospital LP, along with managing partner Columbia Palm Beach GP, is named as a defendant in the lawsuit.

A media representative for HCA, Palms West's owner, denied the allegations in the lawsuit. "It’s always difficult to lose a loved one, and our hearts go out to the Dziedzic family," she said. "While we have sympathy for the family, we dispute the facts as set forth in the complaint and intend to defend these allegations vigorously." An attorney at the law firm of Billing Cochran referred inquiries to the West Palm Beach firm Wicker Smith, which has not responded to New Times' requests for comment by phone and email.

Barbara, who describes herself as a full-time mom, says Josh was the anchor of a tight-knit family hailing from Lansdale, Pennsylvania. They moved to Cape Coral on Florida's west coast when he was in first grade. Growing up, he was a good-humored, "cuddly kid" whose buoyant charm held the family together. "No matter what you did... he would just come back and love you more," Barbara adds.

In his youth, Josh enjoyed go-carting and target-shooting with his father. Working as a bagger at a local grocery store when he was 14 years old, he saved money so he could buy a car, work on it, and have it ready to drive when he earned his license.

When he was nearing the end of his time at Ida Baker High School, Josh was in a car accident. Like countless patients in South Florida, he became hooked on the painkillers prescribed to him after surgery to treat his injuries, the Dziedzics say. It was a struggle that plagued him for years.

He looked to be on solid ground after he moved to the east coast of Florida as an adult. He began working as a trainer at a local gym and was excelling at classes at Palm Beach State College. He remained close with family members, spending time with them at Rapids Water Park and taking them to the beach. His nieces loved hanging out with him. He'd lift them up together, one in each muscle-bound arm.

"He started getting into fitness a lot. He was really passionate about it, passionate about helping people," his sister, Stacey Wilson, says while remembering how Josh was in a good place and considering a career in physical therapy.

The family was caught off-guard when he was admitted to Palms West for treatment of an opioid overdose in August 2016. They stayed at his side in the Loxahatchee-area hospital and did what they could to reassure him they weren't angry with him over the stumble.

"I made sure to tell him that I didn't care [about the relapse], that we were excited that we made it through this, and that everything was gonna be better," says his brother Tony, calling Josh his best friend.

Josh stayed in the hospital for more than a week, but by August 18, the darling of the Dziedzic family was on the mend. He was walking around, eating, exercising, and nearing discharge from the intensive care unit. He was doing so well that Tony cleared out his weekend schedule in the hopes of spending time with his brother once he arrived home. "It was like a new beginning," Tony says.

Then, while Josh was sitting next to his mother in his hospital room watching Willy Wonka and the Chocolate Factory, a veteran nurse came in to remove a central venous catheter from his jugular vein, Barbara recalls.

It wasn't a typical, temporary IV line. Central venous catheters extend deep into a patient's body and are inserted for long-term medication administration, among other medical uses. To prevent a potentially deadly pocket of air from entering the vein when a central line is removed, patients are supposed to be in a supine (lying face-up) position. Special breathing techniques can be used to control circulatory pressure to prevent the rare but dreaded medical complication known as a venous air embolism.

Not one of these precautions was taken by Palms West, the Dziedzics contend. When his central line was removed, Joshua was sitting upright. And the gaping catheter wound was not promptly covered by a dressing, the family says.

He quickly stopped breathing and died soon after. The lawsuit filed last week in West Palm Beach charges  conspiracy, infliction of emotional distress, and medical malpractice. The Dziedzics allege Palms West made a concerted effort to hide that Josh died of the venous air embolism caused by removal of the catheter.

The hospital's death summary passed off his collapse as a result of complications from the overdose, the lawsuit claims. His cause of death was listed as "natural" until the Palm Beach County medical examiner changed it to "accident."

The Florida Agency for Health Care Administration (AHCA) issued a review in June 2017 that concluded Palms West failed to report the air embolus to the state, failed to document the death as a medical error, and omitted the incident from the hospital's annual report. The agency found that a doctor's note made mention of the venous air embolism the day it happened. The medical staff admitted to the agency that the safety protocols for removing the patient's central catheter were not followed, according to the AHCA documents.

The Dziedzics' lawsuit says that a hospital-acquired venous air embolism is an avoidable medical mistake that, when fatal, is required to be reported to health officials in every case. Health-care providers have a financial incentive to under-report venous air emboli because the mistake is egregious enough that it can prompt health insurers to deny payment for treatment, the lawsuit says.

Barbara recalls that in the moments after Josh was taken off life support, she couldn't shake the feeling that the hospital was concealing something. "[A hospital employee] wanted to wash him up. And I said, 'No, I want to. I don't want anybody touching him anymore now.' I can't believe this happened this way. There's something that's not right," Barbara says.

She said Josh's death and the hospital's coverup left her emotionally paralyzed, unable to sleep many nights. "I don't have him anymore. He was my baby and my family. He was the glue that put our family together. And there's a big hole now, a big hole because he's not around."

She might have been able to find forgiveness if the hospital had been honest with her. "It's OK to make a mistake. Just admit that you were wrong," she says. "And for God's sake, say you're sorry instead of making me feel guilty."
KEEP NEW TIMES BROWARD-PALM BEACH FREE... Since we started New Times Broward-Palm Beach, it has been defined as the free, independent voice of South Florida, and we'd like to keep it that way. With local media under siege, it's more important than ever for us to rally support behind funding our local journalism. You can help by participating in our "I Support" program, allowing us to keep offering readers access to our incisive coverage of local news, food and culture with no paywalls.
Make a one-time donation today for as little as $1.