Political stunt activist Chaz Stevens returns by sending mortar-size butt plugs to Florida politicians. Photos courtesy of Mount Jab Church
Deerfield Beach resident Chaz Stevens — a self-proclaimed internet stunt activist who ran the now-defunct blog MyActsofSedition.com — has been described as "an arrogant, highly intelligent, profane, misanthropic, resourceful, and nihilistic fellow with a twisted sense of humor."  Regardless of what anyone thinks of his crass brand of political activism, Stevens produces results, which include the arrests of three elected Broward officials in 2009.

Stevens, a militant atheist, is responsible for installing Festivus poles (y'know, the yuletide holiday invented in the '90s sitcom Seinfeld) at nativity scenes on government-owned property across the state of Florida, all in the name of religious freedom and the separation of church and state.

But ever since Stevens announced his retirement in 2016, holiday seasons haven't been the same.

New Times has confirmed that the Chaplain of His Holy Boner (as he calls himself) has returned from a five-year hiatus to launch a new organization: Mount Jab Church, Holy Church of the Vaccinated. This year, Stevens is celebrating the holiday season by sending a special gift to local public officials on his naughty list. In lieu of coal, he has sent butt plugs — no, make that big butt plugs — er, big-ass butt plugs that weigh nine pounds and are eleven inches long and five inches wide.

"Their heads are so far up their goddamn asses, so I figured when they take their heads out, they'll need something else to put up there," Stevens tells New Times.

The butt plugs weigh nine pounds and measure eleven inches long and five inches wide.
Photo Courtesy of Mount Jab Church
Having taken a break to focus on his remote mental healthcare business, Stevens says he was coaxed out of retirement by a series of political slights, injustices, and questionable pandemic choices that have outraged him enough to put his sex toys where public officials' heads are.

Mayor Trantalis earned a spot on Stevens' naughty list when the city rejected the activist's requests to erect a "Fauci Claus" cardboard cutout in a public area, informing him that the city did not put up displays by private individuals on public land.

"He ignored me at his own peril," Stevens says.

The matching plugs for the mayor and police chief of Hollywood are linked to the city's backing of a controversial plan to build a condo on public land overlooking the beachfront. When resident Catherine Uden announced that she planned to attend a block party dressed as a high-rise condo in an act of protest, the Hollywood Police Department told her she'd be arrested if she followed through and told anyone why she was wearing the getup. (After the national news media covered the skirmish, Uden wore the costume to the block party without incident.)

Viewing the prior restraint as an assault on the First Amendment, Stevens put Levy and O'Brien on his list of Florida officials who #GotDonged. 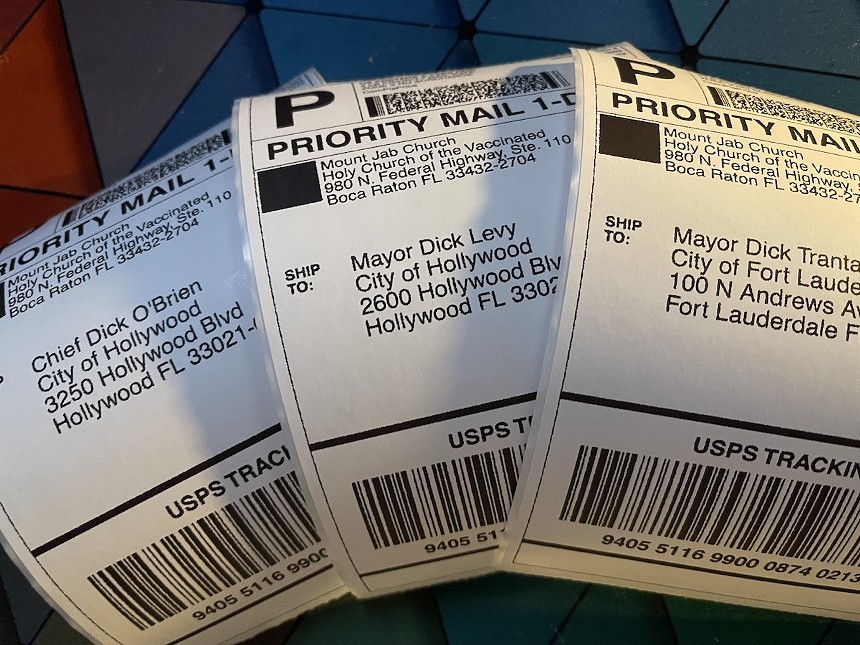 DeSantis earns Stevens' special trophy for hiring Surgeon General Joseph A. Ladapo in September. Ladapo, who has ties to fringe groups that promote bogus COVID-19 treatments, is now in charge of the Florida Department of Health and the state's COVID-19 response, which is a step too absurd even for Stevens.

"There's no other person who deserves a butt plug up their ass than Ron DeSantis — with love and tenderness and lots of Anal-Ese," Stevens imparts.
click to enlarge Mount Jab has launched a TikTok account wherein Stevens says he'll post videos of artists drawing political figures with penises for noses. He says his "elves" have manufactured "Fauci Claus" cardboard cutouts of the president's chief medical advisor, Dr. Anthony Fauci, in a Santa suit and mailed them to the halls of Congress today.

Stevens says he has received death threats over the years and understands the perils of reinserting himself into the activism arena. But he welcomes the thrill.

"This shit gives me a boner," he confesses.
KEEP NEW TIMES BROWARD-PALM BEACH FREE... Since we started New Times Broward-Palm Beach, it has been defined as the free, independent voice of South Florida, and we'd like to keep it that way. With local media under siege, it's more important than ever for us to rally support behind funding our local journalism. You can help by participating in our "I Support" program, allowing us to keep offering readers access to our incisive coverage of local news, food and culture with no paywalls.
Make a one-time donation today for as little as $1.