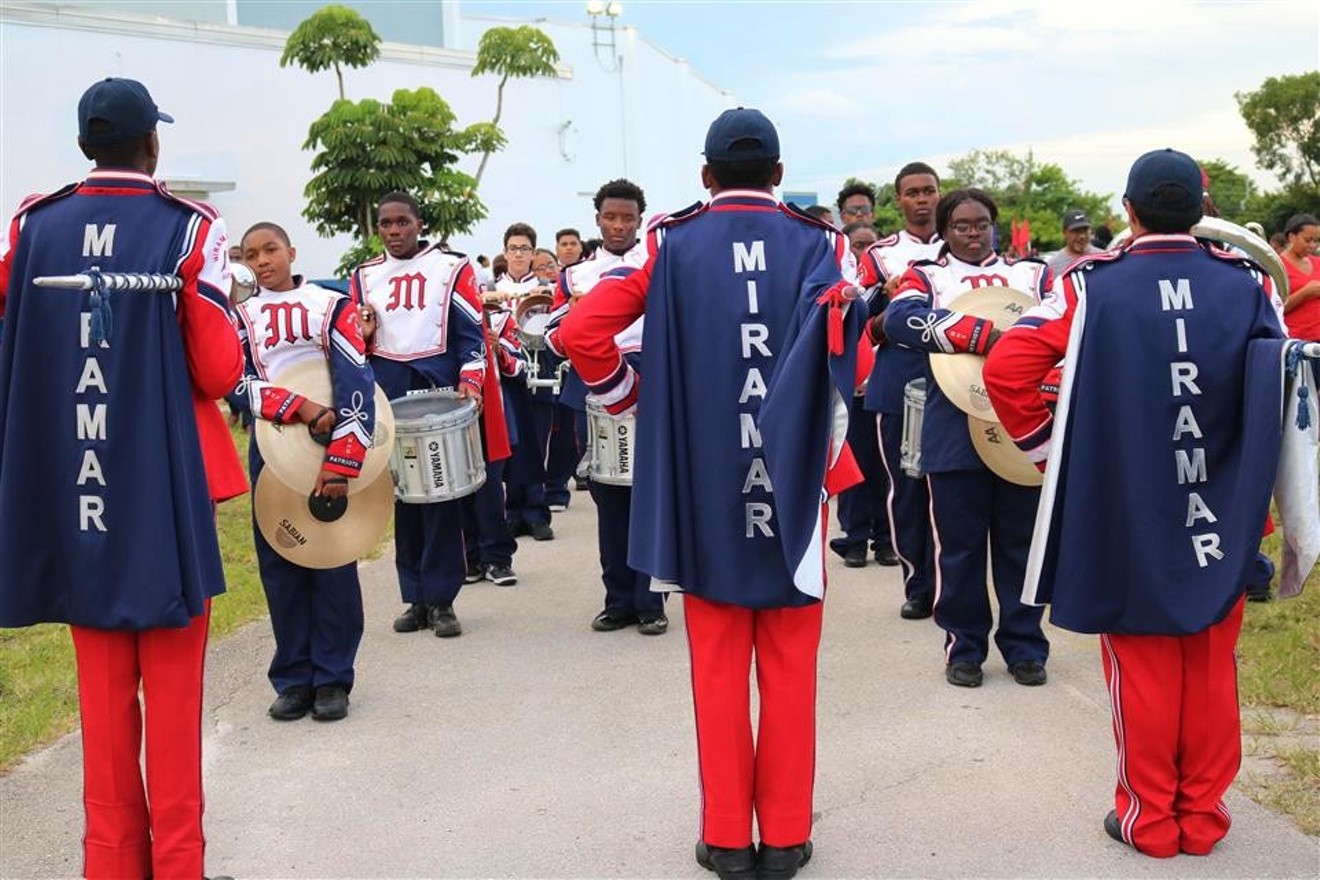 Miramar High School Broward County Public Schools
More than 10,000 people of Haitian ancestry live in Miramar, a city with the fifth-highest Haitian population in Florida. Naturally, the local public schools have a large number of Haitian students — after the devastating 2010 earthquake on the island, Miramar High School took in 46 Haitian refugees, more than any other school in South Florida.

So when Miramar High math teacher Dagoberto Magana Velasquez was overheard making a racist comment about Haiti during the 2015-16 school year, he was quickly suspended without pay. According to a state complaint, Magana referred to Haiti's capital, Port-au-Prince, as "the hood." At least one student told district administrators he transferred out of Magana's class "because he was racist and unhelpful."

In addition to the insult about Haiti, Magana also made derogatory comments toward low-income students, according to state disciplinary records. In one instance, he allegedly said certain students smell bad because they are "from the hood where there is no hot water." On another occasion, Magana remarked that his students "drink from sewers because their food stamps do not get in on time."

The state's complaint concludes that Magana repeatedly "made racially, ethnically, and/or socioeconomically driven disparaging comments toward students on school grounds and during school hours." Following an investigation, the Florida Department of Education has now placed Magana on one year of probation and fined him $750, according to a new disciplinary order.

Magana did not respond to a request for comment sent to his school email; a man who answered a phone number previously listed under Magana's name said New Times had reached the wrong number.

The comment was reminiscent of Donald Trump's widely criticized reference to immigrants from "shithole countries" in January 2018.

District records show Magana came to the Broward school system from Miami-Dade in 2007. As of 2015, he made an annual salary of $75,200. According to the school's staff directory, he remains employed by Miramar High School.

Unfortunately, Magana is far from the only Broward educator to make racist remarks to students. In 2013, a teacher at Blanche Ely High School was suspended after calling a black student a "little chocolate boy" and "the dark chocolate nobody likes to eat." Another teacher from Cypress Bay High School was similarly disciplined after calling a 14-year-old student a "rag-head Taliban."

Students at Miramar High have also accused school staff of racial insensitivity. In 2016, one student claimed a school secretary called the Haitian culture "," while another said she was asked to take down a Haitian flag on the district's Haitian Flag Day.
KEEP NEW TIMES BROWARD-PALM BEACH FREE... Since we started New Times Broward-Palm Beach, it has been defined as the free, independent voice of South Florida, and we'd like to keep it that way. With local media under siege, it's more important than ever for us to rally support behind funding our local journalism. You can help by participating in our "I Support" program, allowing us to keep offering readers access to our incisive coverage of local news, food and culture with no paywalls.
Make a one-time donation today for as little as $1.

Jessica Lipscomb is news editor of Miami New Times and an enthusiastic Florida Woman. Born and raised in Orlando, she has been a finalist for the Livingston Award for Young Journalists.
Contact: Jessica Lipscomb
Follow:
Twitter: @jessicalipscomb