Rommel Lassiter (left), reunited with his daughter, 5-year-old Leah-Ranee Rose Lassiter, who went missing six months ago. Photo courtesy of Rommel Lassiter
Rommel Lassiter has spent the past six months hardly able to sleep and eat, wondering whether his little girl would ever come home.

After being awarded shared custody of his 5-year-old daughter Leah-Ranee Rose Lassiter in Miami-Dade family court, Lassiter was supposed to pick her up from the Fienberg Fisher K-8 Center in Miami Beach on November 22, but the school said she never arrived, and the girl's mother, Chantelle Iman Dortch, was nowhere to be found.

Despite Lassiter's repeated attempts, Miami Beach police refused to release an Amber Alert for the missing Black girl — because, Lassiter says, they determined the issue was a civil/family matter between him and Dortch (i.e., not police business) and declined to look at the court order documenting Lassiter's legal custody. When Lassiter said he wanted police to perform a welfare check on Leah-Ranee, Lassiter says, the officer told him, "And I want to win the lottery."

Six months later, police in Georgia located Leah-Ranee outside Atlanta. She has been reunited with her father and returned home to Miami Beach.

"I'm super-excited, I'm crying," Lassiter tells New Times. "Nobody knew for sure if she was all right, and I needed to see that for myself that she was okay. Now I'm happy."

As Lassiter's attorney, Malik Leigh, tells it, last week an unidentified tipster in South Fulton, Georgia, half an hour outside of Atlanta, crossed paths with Dortch and her daughter and sensed that something was amiss. After looking up Dortch online, the tipster found a missing poster for Leah-Ranee and read New Times' coverage of her case, prompting the tipster to call Dortch's attorney.
click to enlarge 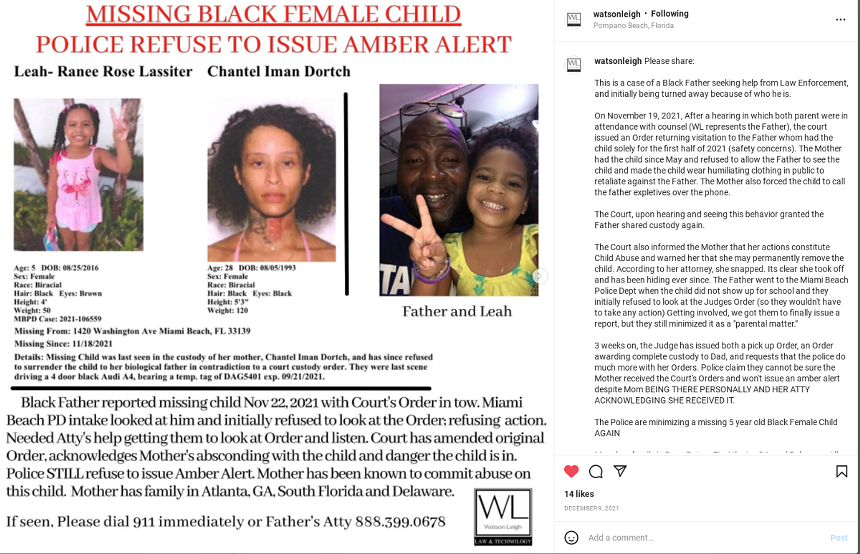 Leah-Ranne Rose Lassiter's missing poster created by Malik Leigh's law firm after Miami Beach police declined to issue an Amber Alert.
Screenshot from Watson Leigh via Instagram
Leigh says he had told police his client's daughter was likely in the Atlanta area, where Dortch has family but that the tipster's call was the first sighting of Leah-Ranee since she went missing. When he received the tip, Leigh contacted MBPD, which forwarded the information to the South Fulton Police Department (SFPD), which immediately began surveilling Dortch and quickly located the girl.

"Once SFPD got on it, they got on it. They wasted no time," Leigh reports. "It was a night-and-day difference in the attention paid to us by Georgia police and Miami Beach police," he adds.

Last year, MBPD spokesperson Ernesto Rodriguez explained to New Times that "investigators advised the missing child does not meet FDLE’s criteria for an Amber Alert and therefore one could not be finalized. We have entered the child into the database as missing. As for an arrest warrant, the child’s father would first have to file an emergency injunction prior to an arrest warrant being issued."

Leigh's response at the time: "That's what happens when Black kids go missing. We're never alerted. That's par for the course. [Lassiter] received that treatment because of who he is and what he looked like. That's something to be expected in South Florida, and especially in Miami Beach."

Leigh says South Fulton police retrieved Leah-Ranee and arrested Dortch as a "fugitive from justice" on May 19, only hours after he explained the situation. Lassiter took a flight to Georgia and by midnight on May 20 he and his daughter were reunited at an SFPD police station.

Leah-Ranee is now back in Miami Beach, where Lassiter is homeschooling her to make up for the six months she fell behind in her classes. He says the 5-year-old was happy to see all of her old toys, stuffed animals, and paintings still in her room exactly where she left them.

"At first it was almost like she didn’t know me because she was in a traumatizing situation. The only person she’d been around was her mom," Lassiter tells New Times. "I know it's going to be a process for her, but I’m going be there day by day with her."
KEEP NEW TIMES BROWARD-PALM BEACH FREE... Since we started New Times Broward-Palm Beach, it has been defined as the free, independent voice of South Florida, and we'd like to keep it that way. With local media under siege, it's more important than ever for us to rally support behind funding our local journalism. You can help by participating in our "I Support" program, allowing us to keep offering readers access to our incisive coverage of local news, food and culture with no paywalls.
Make a one-time donation today for as little as $1.