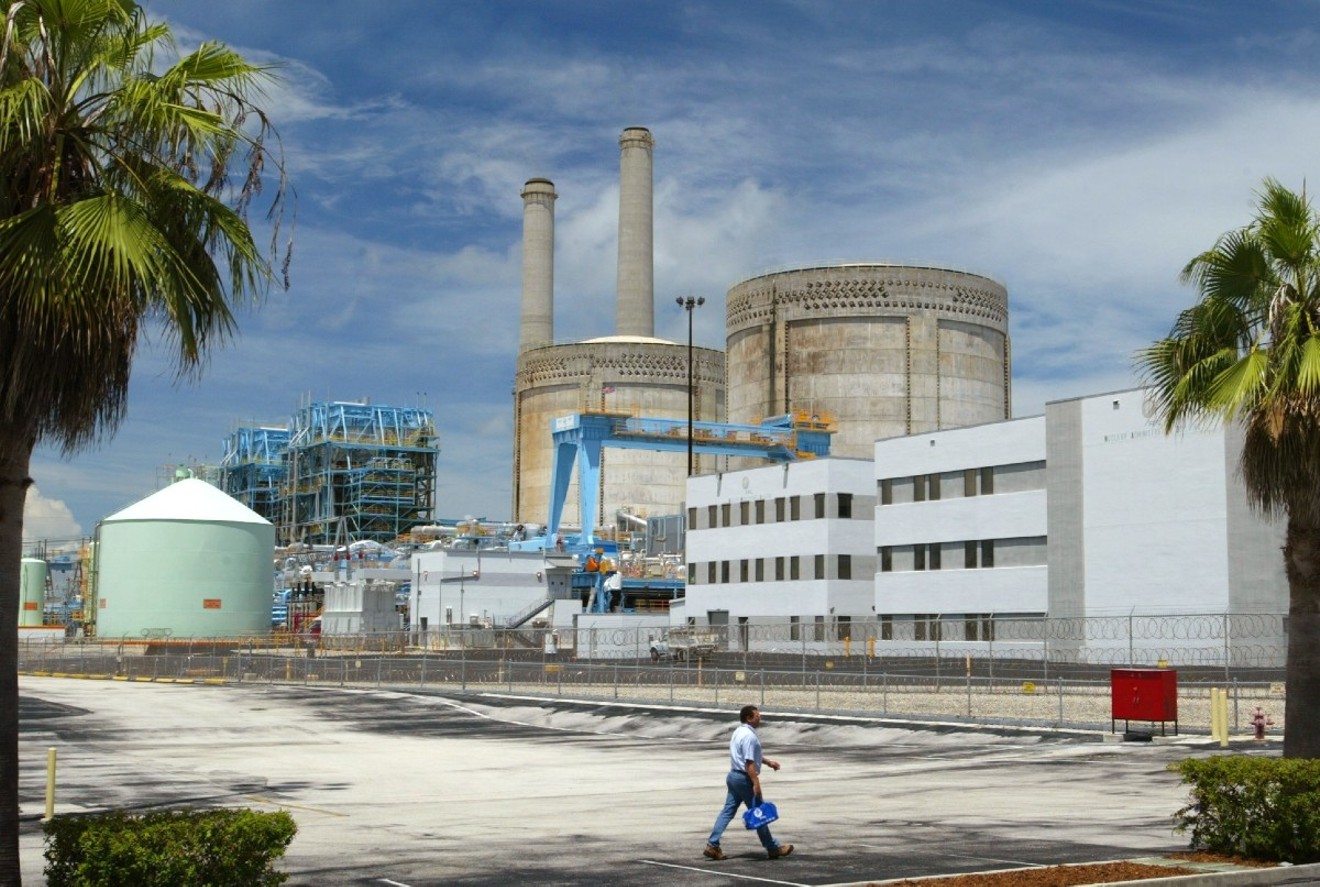 A worker walks past the Turkey Point Nuclear Power Plant. Photo by Joe Raedle/Getty
Florida Power & Light's (FPL) Turkey Point nuclear plant near Homestead will be subject to elevated scrutiny from federal regulators in the coming months after a series of unplanned reactor shutdowns.

In March, Turkey Point's Unit 3 reactor experienced its fourth unplanned shutdown in seven months. Detailed in an inspection report released this past Friday, the event caused the plant to be downgraded from a "green" to "white" performance rating. The white rating "represents performance outside an expected range of nominal utility performance but related cornerstone objectives are still being met."

Turkey Point is one of only three U.S. plants to have been hit with a downgrade; the other two are the Callaway nuclear plant in central Missouri and the Grand Gulf facility in southeastern Mississippi.

Federal rules dictate that if a nuclear reactor has more than three unplanned shutdowns in 7,000 operating hours — typically just under a year of operation — the reactor's performance grade is lowered and the plant operator comes under a special evaluation by the U.S. Nuclear Regulatory Commission (NRC).

"That kicks in additional monitoring and additional inspection. And so we go back and verify that the licensees, in this case Florida Power & Light...are aware of the situation, that they are determining how to improve their performance. Then we verify that their corrective actions will likely improve their performance," NRC Branch Chief David Dumbacher tells New Times.

Federal regulators say they expect to complete the inspection by August.

The newly released report shows that the March 1 shutdown occurred during a routine test of Turkey Point's reactor protection system. FPL linked the shutdown to a malfunction in a reactor trip breaker switch. The company said in a report filed in late April that "all equipment...functioned normally" in response to the malfunction.

Federal regulators did not issue any safety violations over the March shutdown.

Globally, a typical nuclear power plant experiences an unplanned reactor shutdown — known as a "scram" — every two to three years on average per reactor unit, according to the International Atomic Energy Agency.

But last year, Turkey Point Unit 3 underwent three unplanned shutdowns in a short span of four days. The scrams were blamed on a cascade of equipment breakdowns and plant operator errors.

The first scram, which took place August 17, was triggered by a water-damaged switch in the reactor's steam-generator system. Two days later, while trying to start up the reactor, plant staff pulled out its control rods in a haphazard manner, causing the plant's power level to barrel out of control. An automatic safety system then kicked in and shut down the process. A third scram occurred August 20.

Though federal regulators determined that the August shutdowns were of low concern, nuclear watchdogs sounded off, warning that the close succession of scrams warranted greater scrutiny. Edwin Lyman, a director of nuclear safety at the Union of Concerned Scientists, told New Times that "there were multiple failures in all different areas, across the board" last August.

Lyman told New Times that the rating system for events such as the August scrams has been subjected to "great inflation," making it rare for the NRC to issue safety violations above the lowest grade.

During a May 12 annual meeting about Turkey Point's performance, branch chief Dumbacher maintained that FPL in 2020 operated the plant "safely and in a manner that preserved public health and safety and protected the environment."

When New Times cited nuclear watchdogs' concerns that the NRC rating system for safety violations has been watered down, the branch chief stood firm. He said the agency's plant-monitoring process "sets thresholds that through the years we've proven are appropriate."

"The process still is the same. And it still works," Dumbacher said.

May 2021 inspection report re: Turkey Point from the U.S. Nuclear Regulatory Commission.
KEEP NEW TIMES BROWARD-PALM BEACH FREE... Since we started New Times Broward-Palm Beach, it has been defined as the free, independent voice of South Florida, and we'd like to keep it that way. With local media under siege, it's more important than ever for us to rally support behind funding our local journalism. You can help by participating in our "I Support" program, allowing us to keep offering readers access to our incisive coverage of local news, food and culture with no paywalls.
Make a one-time donation today for as little as $1.