Corey Jones. See photos from the crime scene here. Courtesy of Clinton Jones
A jury this morning found Nouman Raja — the former Palm Beach Gardens cop who killed local drummer Corey Jones in October 2015 as Jones was waiting for his car to be towed off the highway — guilty of manslaughter and attempted first-degree murder. The verdict was read around 9:15 a.m.

Raja is the first Florida cop convicted for an on-duty killing since 1989.

Raja never denied killing Jones. The officer instead tried to argue the killing was lawful. But the jury was not convinced, seemingly for good reason. The night Raja killed Jones, the drummer's car, a silver Hyundai Santa Fe, had broken down on I-95 near the PGA Boulevard exit. Jones was sitting waiting for a tow. The 31-year-old was seemingly minding his own business when Raja showed up in an unmarked car and wearing plain clothes. The officer instigated the encounter.

But Raja did not identify himself as a cop. The officer did tell Jones to put his "fucking hands" in the air. Confused, Jones ran for his life. Raja shot him six times as he ran away. While Jones initially had a pistol he was licensed to carry, he had dropped the gun before Raja killed him.

Jones' brother had previously offered to give the drummer a ride home after his car broke down. But Jones refused, stating he did not want to leave his drum set behind on the highway. Plus, he had to play in church in a few hours.

New Times previously reviewed the audio from Jones' call to AT&T Roadside Assistance. After Jones spoke to his brother, he checked back in with AT&T. That call captured Jones' exchange with Raja. Raja walked up to Jones and began speaking to him:

Jones had been legally carrying a .380-caliber pistol. As Jones ran, Raja fired three shots at him, hitting Jones' arms. Jones then dropped his pistol.

But Raja then fired three more shots — those hit Jones right in the chest. One pierced his heart.

Jones almost certainly died without knowing that the man who shot him was a cop.

Raja had previously tried to claim he was protecting himself under the state's "Stand Your Ground" law, but a court rejected that argument. Raja now potentially faces life in prison. 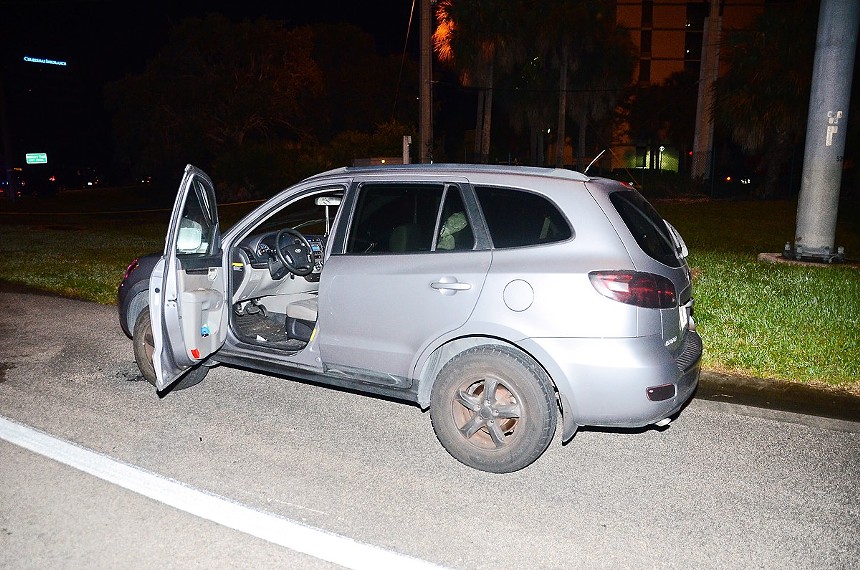 Jones' car as he left it the night of the shooting.
Palm Beach County State Attorney's Office

Raja is the first Florida officer convicted of an on-duty killing since William Lozano, a City of Miami officer, shot and killed a black motorcyclist named William Lloyd. The homicide sparked an infamous 1989 riot in Miami. Lozano was initially convicted, but his case was ultimately overturned.

The fallout from that case scared many Florida prosecutors away from charging cops for on-duty deaths: No officer was arrested for an on-duty killing until when former Broward Sheriff's Office Deputy Peter Peraza was charged with manslaughter for killing 33-year-old Jermaine McBean. McBean had been carrying an unloaded air rifle and reportedly was wearing headphones when Peraza killed him. But Peraza was ultimately acquitted after the cop argued he was "standing his ground." That case set a precedent for Florida officers in stand-your-ground cases, as the Florida Supreme Court ultimately ruled cops can indeed invoke the law for on-duty conduct.

Another Florida cop, ex-North Miami SWAT Officer Jonathan Aledda, is in the midst of a criminal trial for attempted manslaughter after shooting black behavioral health worker Charles Kinsey in the leg in June 2016. Kinsey was trying to help an autistic man out of a street intersection. Bystanders filmed Kinsey as he lay down on the ground, raised his hands in the air, and begged cops not to shoot him. Aledda shot anyway, thankfully only hitting Kinsey in the leg. New Times later obtained evidence showing Aledda was told at the crime scene not to open fire. Days after New Times published that evidence, Aledda was arrested.

This is a breaking story. This post will be updated.
KEEP NEW TIMES BROWARD-PALM BEACH FREE... Since we started New Times Broward-Palm Beach, it has been defined as the free, independent voice of South Florida, and we'd like to keep it that way. With local media under siege, it's more important than ever for us to rally support behind funding our local journalism. You can help by participating in our "I Support" program, allowing us to keep offering readers access to our incisive coverage of local news, food and culture with no paywalls.
Make a one-time donation today for as little as $1.