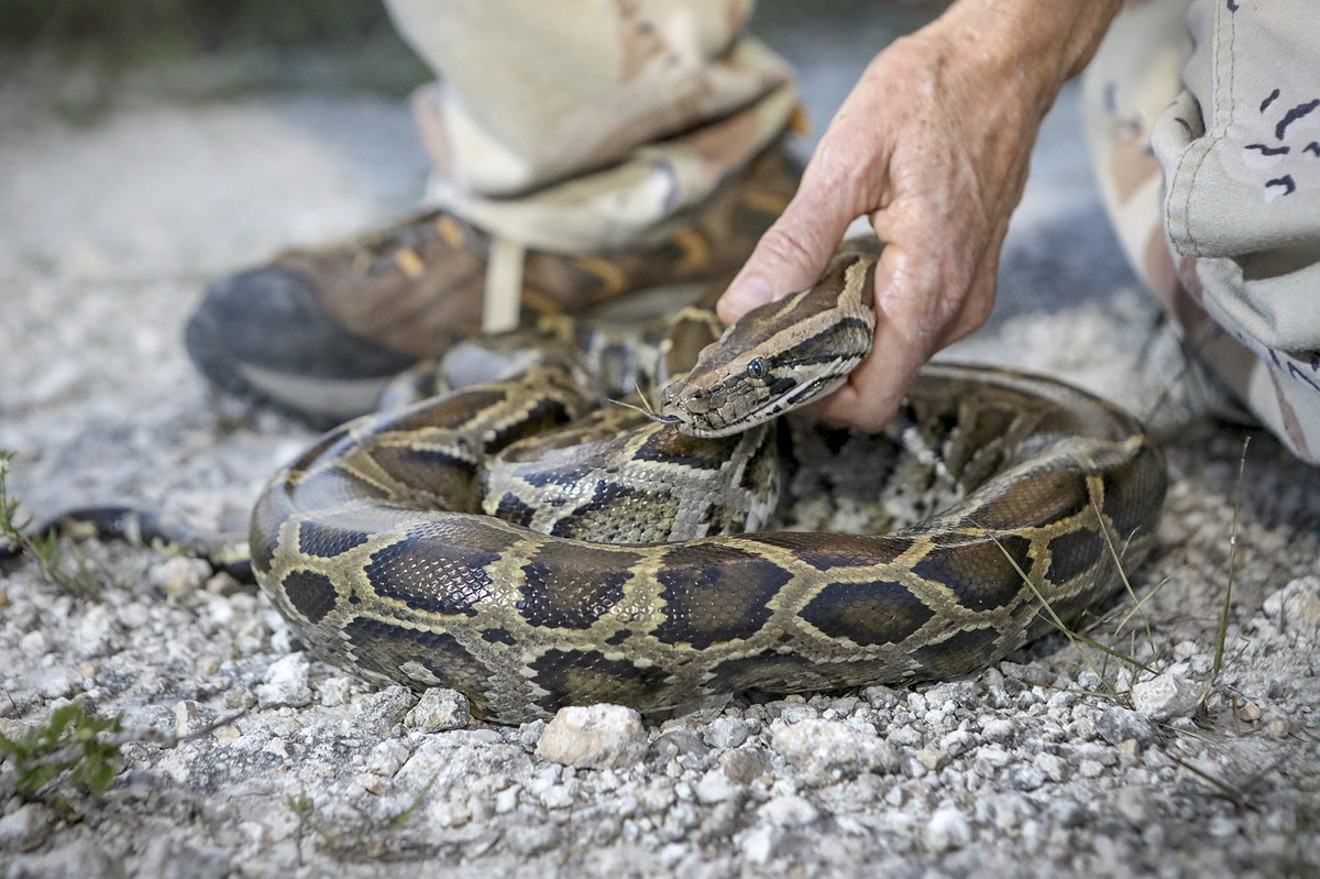 Pythons, which are native to Southeast Asia, are an invasive species in Florida. Photo by CandaceWest.com
In its latest fight to equalize the value of humans and animals, People for the Ethical Treatment of Animals (PETA) has called the 2020 Python Bowl a "grotesque contest."

In a letter sent Monday to the Miami Super Bowl Host Committee, PETA president Ingrid Newkirk condemned the state's python hunt and the use of snakeskin for themed footballs.

"There is simply nothing here to cheer about. Using their skin as part of the entertainment trivializes the animals' deaths, and killing them should not be seen as something fun," Newkirk wrote.

Newkirk asked the committee to cut ties with the Python Bowl and said PETA members would "escalate actions" to protect the animals if necessary.

The Python Bowl is the latest iteration of Florida's recurring python challenge. This year, the Super Bowl Host Committee, the South Florida Water Management District, and the Florida Fish and Wildlife Conservation Commission have partnered to draw media attention from the upcoming game to the state's invasive species crisis. Professionals and amateurs are competing to hunt and kill the most pythons in the Everglades.

Pythons, which are native to Southeast Asia, are an invasive species in Florida. The exotic snakes were released either by irresponsible pet owners or by the chaos of Hurricane Andrew, according to the most prominent theories. With no natural predators, the pythons have been left to roam the Everglades, where they have ravaged local animal species. The python challenge was conceived as a way to fight the surging populations of the invasive snake.

In a media release sent yesterday, PETA says the snakes can't be blamed for their departure from their native home or for their subsequent release. And the group says initiatives such as the Python Bowl subject them to abuse by the public.

"Their unique physiology puts them at risk of experiencing prolonged, agonizing deaths at the hands of people unequipped to euthanize them humanely," the nonprofit says in the release.

According to a petition on PETA's website, pythons are difficult to kill quickly and humanely, so sending untrained hunters to take them out is unethical.

The Python Bowl is underway and is set to end Sunday. The awards ceremony for hunters who catch the longest, heaviest, or most snakes will be held January 25 in Bayfront Park.
KEEP NEW TIMES BROWARD-PALM BEACH FREE... Since we started New Times Broward-Palm Beach, it has been defined as the free, independent voice of South Florida, and we'd like to keep it that way. With local media under siege, it's more important than ever for us to rally support behind funding our local journalism. You can help by participating in our "I Support" program, allowing us to keep offering readers access to our incisive coverage of local news, food and culture with no paywalls.
Make a one-time donation today for as little as $1.