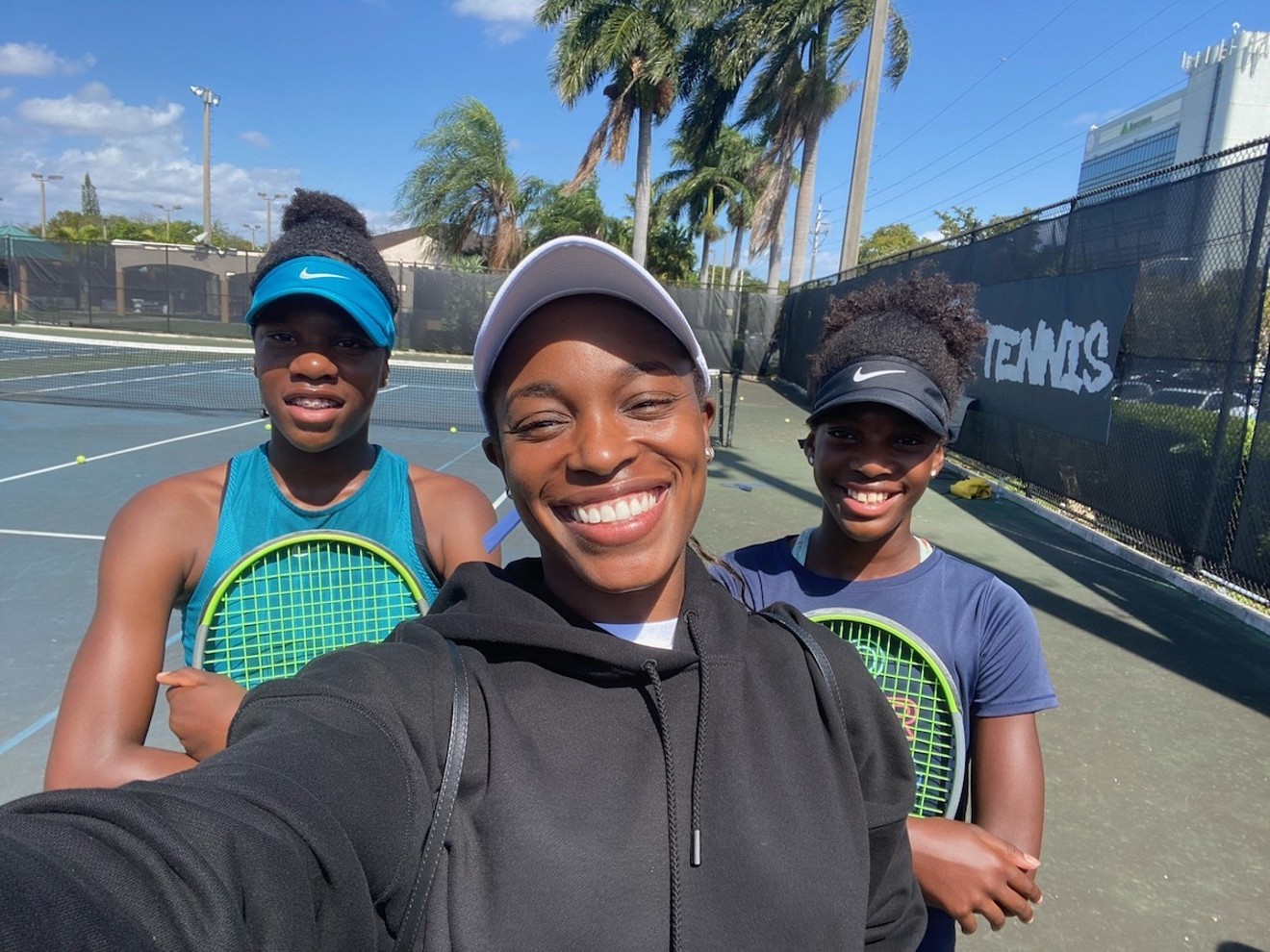 Sloane Stephens with the Samabaly twins, two of the students her foundation is supporting in South Florida. Photo courtesy of the Sloane Stephens Foundation
After 2020 destroyed all of its momentum, the Miami Open is serving up shots once again.

In 2019, the event attracted a record number of fans — well over 300,000 — as it was held at Hard Rock Stadium grounds for the first time. For more than 30 years prior, the Tennis Center at Crandon Park in Key Biscayne played host. But tournament organizers canceled less than two weeks before the event, as the COVID-19 pandemic was growing in force.

And now it’s back. The main-draw action of the 2021 Miami Open kicked off Monday and runs through April 4.

Fans who attended the Open at Hard Rock in 2019 should expect things to be a little different this time around. The stadium itself will not be used; instead, the Grandstand Court will be the center of the action. And, whereas most major tennis events offer some general-admission seating, at this year's Open, all seating will be assigned and numerous safety protocols are in place.


Some notable names have withdrawn — Serena Williams, Novak Djokovic, and Rafael Nadal among them — but the remaining field includes the number-one-ranked women's tennis player in the world, Ashleigh Barty, as well as 2021 Australian Open champion Naomi Osaka and Russian star Daniil Medvedev.

There are also several players with local roots.

Stephens, now 28, came into the tournament looking to turn things around after a difficult 2019 and a pandemic-annihilated 2020. After peaking as the world's number 3 player in 2018, she's now ranked at 49. Her game plan entering the tournament was simple, she told New Times in advance of her first match, which played out yesterday.

“I’d like to win a match. That would be good,” she laughed. “And then after that, play my game and just have fun. Obviously, with the pandemic, it’s been really stressful and not always the most fun. So getting out there and having a good time is a priority for me in Miami.”

Beyond the court, she says she's looking forward to spending some time at home.

“Growing up here, having everything that reminds me of my childhood has been really nice,” Stephens elaborates. “[My fiancé Jozy Altidore and I] spent five months of quarantine last year at our house here in Florida. I ordered from all of my favorite restaurants and it was so comforting. It was nice to be home and just chill and eat Beverly Hills Café all the time, which is my favorite restaurant.”

(For the record, Stephens also speaks highly of the Jerk Machine, the Crafty Crab, Stallone’s, Padrino’s, and Chima. And as for the Fort Lauderdale versus Miami debate, it’s a no-brainer. “Fort Lauderdale is so much better, are you kidding me?” she says emphatically. “That’s not even a question.”)

Stephens always finds time to spend with the kids who take part in the programs offered by the Sloane Stephens Foundation, which provides educational and fitness opportunities, including a tennis program, to underserved youth throughout Broward County and Compton, California. The organization recently partnered with SAP for support to help take its tennis program to the next level.

“It’s been really rewarding just to see people gather towards the game and actually like it,” she says. “Not just the tennis part, but the education part. We offer so much, and I think giving the kids the opportunity to have these extra things in their lives is super cool.”

Stephens dispensed with French qualifier Océane Dodin in three sets in yesterday's first-round match, 6-7, 6-4, 6-2. Having come into the tournament unseeded, she'll play 19-year-old Amanda Anisimova, who was born in Freehold, New Jersey, but grew up in Miami, in the round of 64 on Friday. Between that and a doubles match this morning (Thursday), family time might have to wait.

Miami Open. Through April 4 at Hard Rock Stadium, 347 Don Shula Drive, Miami Gardens; miamiopen.com. Single session tickets start at $75 via ticketmaster.com.
KEEP NEW TIMES BROWARD-PALM BEACH FREE... Since we started New Times Broward-Palm Beach, it has been defined as the free, independent voice of South Florida, and we'd like to keep it that way. With local media under siege, it's more important than ever for us to rally support behind funding our local journalism. You can help by participating in our "I Support" program, allowing us to keep offering readers access to our incisive coverage of local news, food and culture with no paywalls.
Make a one-time donation today for as little as $1.