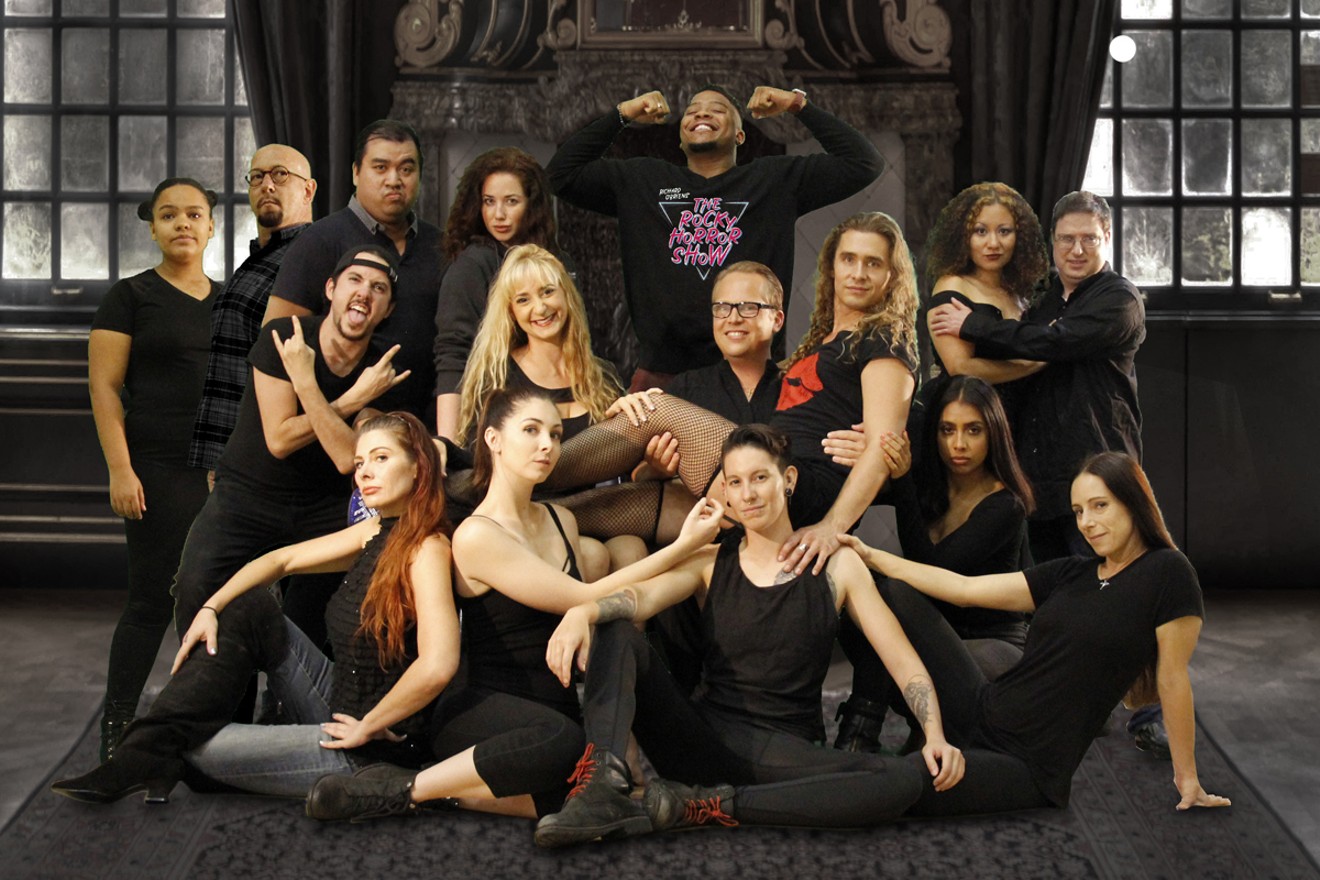 The cast of Entr’Acte Theatrix’ The Rocky Horror Show. Photo courtesy of Entr'Acte Theatrix
Believe it or not, Halloween is just around the corner. And what better way to begin celebrating the scariest, most goose-bump-raising season of the year than with the friendly folks from Dr. Frank N. Furter’s home-sweet-castle in Richard O’Brien’s cult favorite, The Rocky Horror Show. The outrageous performers who make up Entr’Acte Theatrix will kick off a two-week production of the wet, whimsical, wild musical beginning — appropriately enough — on Friday, September 13. The play — which begat the 1975 film starring Tim Curry, Susan Sarandon, Barry Bostwick, and Meatloaf, among others, and featured O'Brien as Riff Raff — grew from an experimental performance in a small London theater in June 1973 into a cult phenomenon with a worldwide following. Rocky Horror is often performed at special midnight showings and involves audience participation using water, toast, and toilet paper. Be on guard — and wear clean underwear. A portion of proceeds will benefit Bahamas hurricane relief. 7 and 10:30 p.m. Friday, September 13, at the Field House at Old School Square, 51 N. Swinton Ave., Delray Beach; 561-243-7922; oldschoolsquare.org. Tickets and showtimes through September 29 at entracttheatrix.com.

The cast of MNM Theatre Company's Man of La Mancha.
Photo courtesy MNM Theatre Company
The MNM Theatre Company opens its two-play, 2019 season Friday, September 13, with Man of La Mancha, the musical inspired by Miguel de Cervantes’ 17th-century masterwork Don Quixote and set during the Spanish Inquisition. Man of La Mancha is one of the most successful musicals in Broadway history. Powerful, brutal, hilarious, and heartbreaking, the production celebrates the perseverance of a dying old man who refuses to relinquish his ideals or his passion. The celebrated score includes such notable songs as “The Impossible Dream,” “I, Don Quixote,” “Dulcinea,” “I Really Like Him,” and “Little Bird.” 7:30 p.m. Friday, September 13, through September 29, at the Marshall E. Rinker Sr. Playhouse at the Kravis Center for the Performing Arts, 701 Okeechobee Blvd., West Palm Beach; 561-832-7469; kravis.org. Tickets cost $65.

The Norton Museum highlights its Chinese collection on Friday.
Photo courtesy of Norton Museum of Art
The Norton Museum in West Palm Beach celebrates the Chinese Moon Festival on Friday, September 13. Revelers say the best time to honor the Earth’s lunar orb is when it’s fullest and brightest. Visitors can enjoy traditional Chinese music, calligraphy lessons, and mooncakes and tea under the full moon. The evening opens with a meditation session with internationally certified meditation teacher Wenji and also includes a Curator Conversation with Laurie Barnes, the Elizabeth B. McGraw Curator of Chinese Art, exploring the imagery of the moon in East Asian art. From 6-9 p.m., guests can create artwork inspired by the Asian folklore Rabbit in the Moon in an open-studio session.  Also, Zheng Master Haiqiong Deng and Dr. Nan Liu will create traditional Chinese art and play traditional Chinese music in the Goergen Garden in an "Echos of Nature" presentation. 5 to 10 p.m. Friday, September 13, at the Norton Museum, 1450 S. Dixie Hwy., West Palm Beach; norton.org; 561-832-5196. Admission is free. 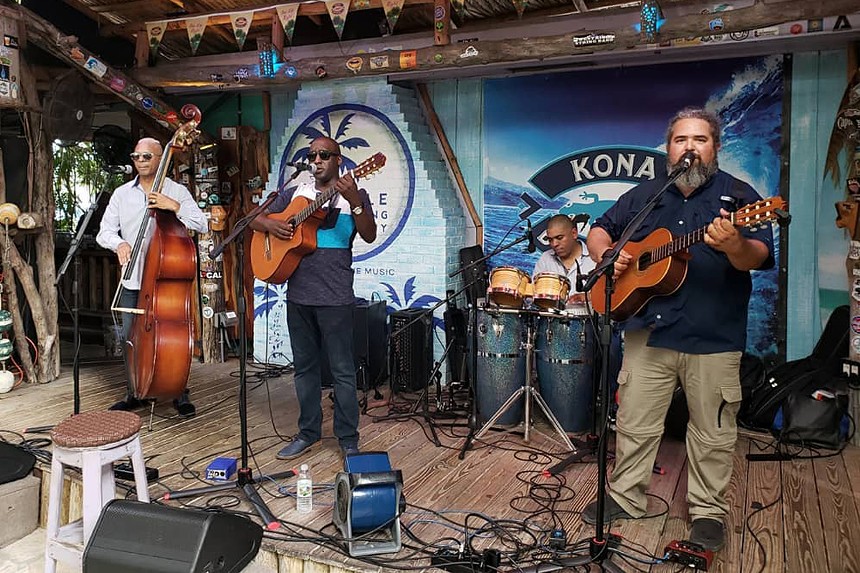 The trio Cortadito plays Friday at the Arts Garage.
Photo courtesy of Cortadito
The Arts Garage in Delray Beach focuses on traditional Cuban music of the early 20th century when it presents the group Cortadita in concert Saturday, September 14. From Son Montuno, Guaracha, Boleros, Nengon, and Bolero Son, this energetic ensemble brings the listener back to a time when Trio Matamoros or Ignacio Piniero ruled the Cuban music world. This was the era when popular music was Cuban music and son montuno was influencing melodies throughout the globe.  From time to time, Cortadito — the New Times' best Latin act of 2019 — is backed by a variety of guest musicians, which gives the group a sound reminiscent of the Buena Vista Social Club. 8 p.m. Saturday, September 14, Arts Garage, 94 NE Second Ave., Delray Beach; 561-450-6357; artsgarage.org. Admission costs $35 to $45 via artsgarage.org. 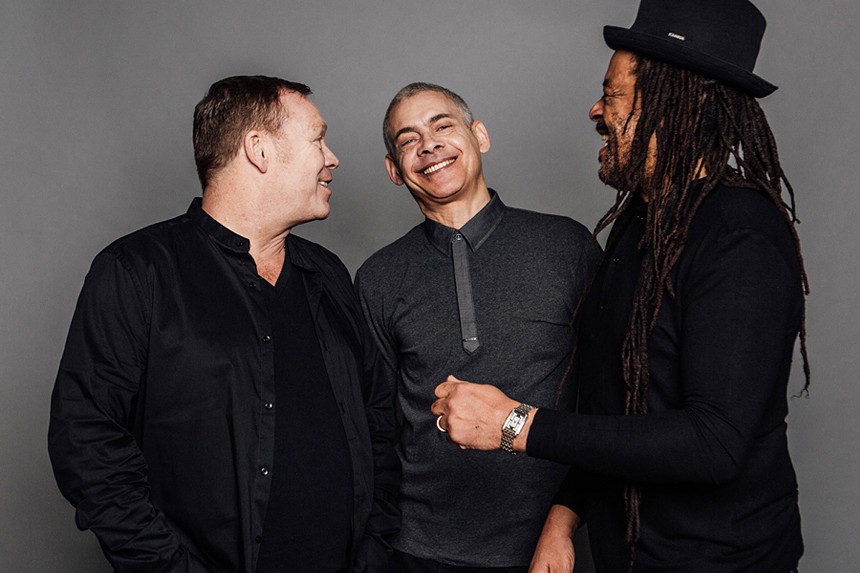 UB40 stops in Boca Raton's Mizner Park as part of the band's 40th-anniversary tour.
Photo courtesy of UB40
If songs like “Red Red Wine” and “Can’t Helping Falling in Love” have a special meaning in your heart and memory, you probably know the famed British reggae group UB40, featuring Ali Campbell and Astro, is currently making its way around the continent on its 40th-anniversary tour. The band makes a stop in Boca Raton on Sunday afternoon, performing faves at the Mizner Park Amphitheater. One of the most successful reggae acts of all time, UB40 has dubbed its the tour as “A Real Labour of Love.” UB40 has sold more than 70 million albums in a successful career dating back to the late 1970s. Those attending the Boca show will see and hear both founding members of the group along with Grammy Award-winning artist Shaggy. 6:30 p.m. Sunday, September 15, Mizner Park Amphitheater, 590 Plaza Real, Boca Raton. Tickets cost $29 and $42 via livenation.com.
KEEP NEW TIMES BROWARD-PALM BEACH FREE... Since we started New Times Broward-Palm Beach, it has been defined as the free, independent voice of South Florida, and we'd like to keep it that way. With local media under siege, it's more important than ever for us to rally support behind funding our local journalism. You can help by participating in our "I Support" program, allowing us to keep offering readers access to our incisive coverage of local news, food and culture with no paywalls.
Make a one-time donation today for as little as $1.