The Best Things to Do in South Florida This Week

The longest-running Pride festival in the sunshine state is back for another whirl. This year’s Pride Fort Lauderdale features five days of rainbow-dyed activities. Can't-miss events Sunday’s beach festival with more than 100 exhibitors, a massive food court, and special performances by American Idol alum Ada Vox and RuPaul’s Drag Race guest judge Todrick Hall. If you’re more of a traditional parade fan, that’s happening on Saturday at 5:30 p.m. and more than 80,000 people are expected to attend. Thursday, February 21, through Sunday, February 24, at various locations throughout Fort Lauderdale; pridefortlauderdale.org. Event pricing ranges from free to $125.

Let’s get artsy, shall we? The Fourth-Annual Arts and Culture Spring Social is Thursday evening at CityPlace. The satellite pop-up shop (three doors down from Anthropologie) will host to exhibit Reimagine as well as live tunes, beverages, light bites and a hands-on craft activity. How you pay to get into this one is up to you: 20 bucks or 20 bucks worth of books to the local Boys & Girls Club. 5:30 to 7:30 p.m. Thursday, February 21, at CityPlace, 700 S. Rosemary Ave., West Palm Beach; cityplace.com. Cost is $20 or $20 in books donation to Boys & Girls Club of PBC.
click to enlarge

Thursday is playing this Friday. It would have been a lot easier to remember if the New Jersey-bred band was playing on a Thursday, but we’ll take it. The band is celebrating its 20th anniversary, taking some of its biggest (and earliest!) hardcore-emo hits on the road. Count on a hearty set with nuggets from its earliest LPs, including War All the Time from 2003. The band is in Fort Lauderdale for two nostalgic nights. 7:30 p.m. Friday, February 22, and Saturday, February 23, at Culture Room, 3045 N. Federal Hwy., Fort Lauderdale; cultureroom.net. Tickets cost $35.

In 2018, community activists Doug Eaton, Manny Mair, Amy Kenny, and Debra Hixon created the MSD Heroes Challenge, designed to bring together communities throughout South Florida in the aftermath of last year's tragic shooting at Marjory Stoneman Douglas Senior High School. The family-friendly event features a two-mile race and all kinds of fun obstacles before you reach the finish line. Funds raised from the event will benefit a number of nonprofits including Stand with Parkland and the National Association of Families for Safe Schools. 6:30 a.m. Saturday, February 23, at Parkland Equestrian Center, 8350 Ranch Rd., Parkland; active.com. Registration costs for events range from $15 to $25.

You’ve seen her on TLC and now you can see her at the Hard Rock Event Center. Theresa Caputo, the star of Long Island Medium and a New York Times bestselling author, is bringing her psychic abilities to Hollywood on Saturday. In addition to being entertained, perhaps you’ll be the one connecting with a loved one or two? You never know. 8 p.m. Saturday, February 23, at Hard Rock Event Center, 1 Seminole Way, Hollywood; ticketmaster.com. Tickets cost $60 to $105.

If you’re wanting to experience the best in established and emerging designers stemming from the African diaspora, Ankara Miami is back for another week. This year’s African Fashion Week includes four days of fun, including a diaspora fashion talk in Hollywood on Friday, an “Africa Meets the Runway” showcase on Saturday in North Miami, and an Ankara Delights pop-up shop in Fort Lauderdale on Sunday. Thursday, February 21, through Sunday, February 24, at various locations throughout South Florida; ankaramiamiweek.com. Cost for events and/or passes ranges from free to $90.

Christopher Cross has been rockin’ for nearly 40 years. That’s right, it’s been nearly four decades since his 1980 self-titled album wowed the world and led him to win five Grammy Awards. In addition to the classics, count on some goodness from his latest LP, Take Me As I Am. The album is loaded with the pristine songwriting Cross is known for, including an ode to his mentor, Joni Mitchell, titled “Roberta”. 7:30 p.m. Monday, February 25, at Broward Center for the Performing Arts, 201 SW Fifth Ave., Fort Lauderdale; browardcenter.org. Tickets cost $49.50 to $89.50. 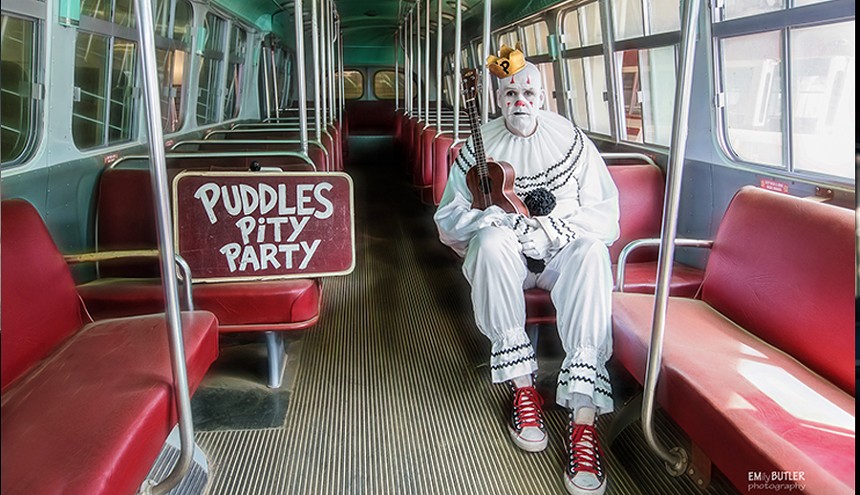 Puddles Pity Party is throwing down on Wednesday at Parker Playhouse.
Courtesy of the Venue
Wednesday

Okay, so clowns are generally terrifying. But, this clown has a beautiful voice and won't scare you. Puddles Pity Party, known as the “sad clown with the golden voice,” features singer Mike Geier all clowned-out and singing tunes like Sia’s “Chandelier” and “Royals” by Lorde. Any clown you see after this will be totally underwhelming. 8 p.m. Wednesday, February 27, at Parker Playhouse, 707 NE Eighth St., Fort Lauderdale; ticketmaster.com. Tickets cost to $32.50 to $47.50.

Talk about an incredible guy. As a police officer protecting the Golden Gate Bridge in San Francisco, Kevin Briggs has single-handedly saved more than 200 people from committing suicide. Known as the “Guardian of the Golden Gate,” Briggs will share his unique perspective on mental health through his lens on Wednesday evening in Boca Raton. 7:30 p.m. Wednesday, February 27, at Chabad of Boca Raton, 17950 Military Trail, Boca Raton; chabadboca.com. Tickets cost $5 in advance, $10 at the door, and is free for high school students.
KEEP NEW TIMES BROWARD-PALM BEACH FREE... Since we started New Times Broward-Palm Beach, it has been defined as the free, independent voice of South Florida, and we'd like to keep it that way. With local media under siege, it's more important than ever for us to rally support behind funding our local journalism. You can help by participating in our "I Support" program, allowing us to keep offering readers access to our incisive coverage of local news, food and culture with no paywalls.
Make a one-time donation today for as little as $1.