We can't quit this team. None of us can. Many of us know that for a fact because we've tried. Yet we all show up again this time of year, hoping things turn out differently but fully expecting they won't.

Everyone deals with disappointment in their own way, and members of the Dolphins fan community are no different. Every Sunday, Miami fans of all shapes and sizes pull up their big-girl pants and get right back on the horse, ready for another dose of football at 1 p.m.

Anyway, there are five types of Miami Dolphins fans we all see on game day. Each is special in their own way.

"Anything can happen!"
Photo by George Martinez


We all need the Always Optimistic Dolphins Fan in our lives, not just for Dolphins football, but in general. The positive energy and obliviousness to their surroundings in the name of love and hope is truly admirable. We're jealous. We wish we could live like them, but we've seen enough Dolphins seasons to know our souls are far too dark to come back at this point. 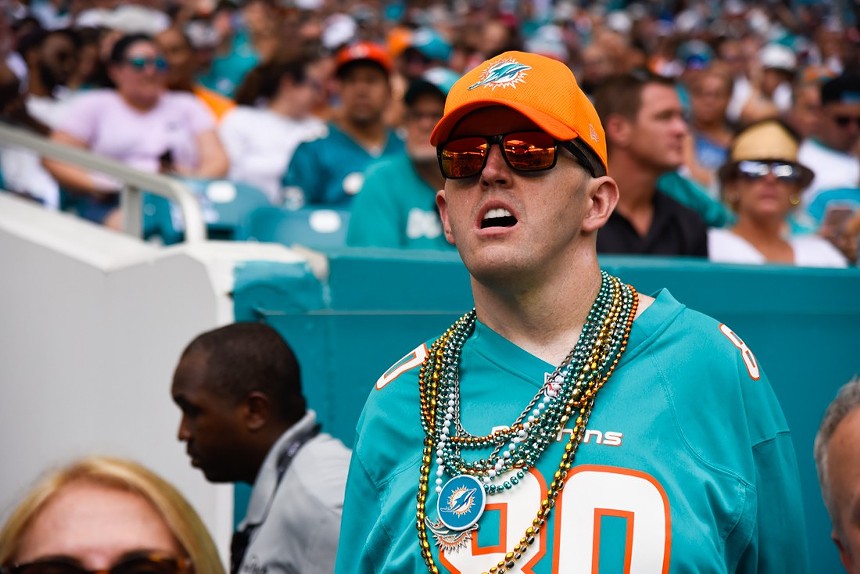 The first person to text you about how stupid the Dolphins are.
Photo by Michele Eve Sandberg

The Pessimistic Dolphins Fan has already checked out for the season. This person has already seen enough this preseason to know that booking a vacation in January will be just fine because the Dolphins won't be playing football anyway.

In Pessimistic Dolphins Fan's eye, the team can do nothing correctly. Honestly, the evidence supports this person's point of view. 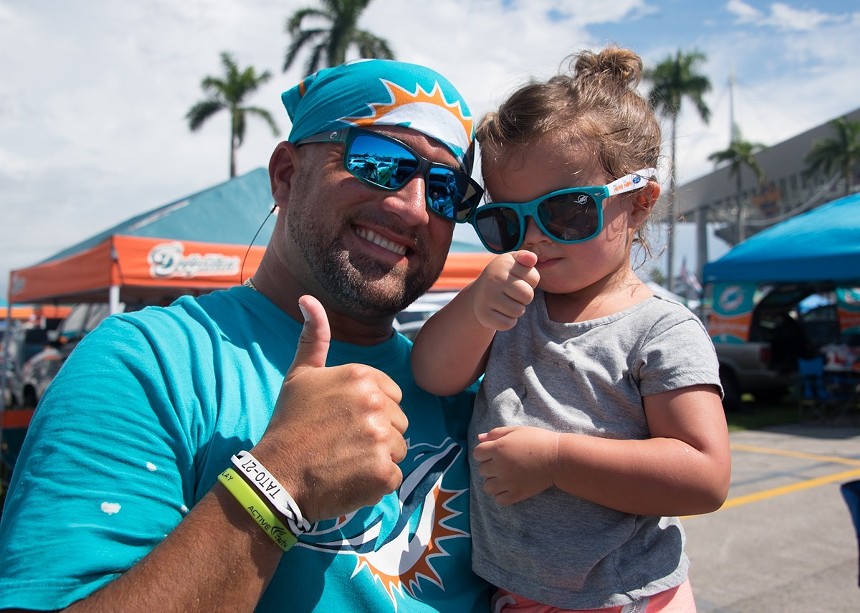 Knowing the beach will still be there in February, some Dolphins fans just want a place to spend their Sundays. Judging by their Facebook posts, you would never be able to tell if the team was 4-12 or 12-4. The grill is hot, the beer is cold, and their friends are sitting in lawn chairs around the back of the car all the same. These people are the Jimmy Buffetts of Miami Dolphins fans.

The #SundayFunday Dolphins Fan doesn't understand that whole "there is so much to do in Miami, so nobody goes to the games" excuse we've all heard when faced with empty stadiums on game day. To them, the stadium is the place to go. The beach and everything else are there all year. Dolphins tailgates are available only eight times a season.

The "I'm Here for the Beer" Dolphins Fan

The flip side of the #SundayFunday Dolphins Fan is the guy or gal using the game as an excuse to get unreasonably drunk on a Sunday morning. If not for the Dolphins game in the background, the binge-drinking would be a concern, but because they're a Miami Dolphins fan and there is a game happening in their general vicinity, it's approved behavior.

This is the Dolphins fan you do not want to be tied to, especially if you're with your family. This is the person you meet at the tailgate, converse with, and then say, "Go Dolphins!" before disappearing to avoid the inevitable bombs associated with drinking tequila at 11 a.m. while eating only hotdogs.

We have to admit, though: This fan is fun. This person also makes double the noise during the game, which allows us to slack off and check Twitter while the stadium announcer implores us to "Get loud!"

The "This Is Unhealthy" Dolphins Fan

A Miami Dolphins loss on a Sunday can and should ruin your next day of middle school. But there are some adults who still take the hurt of a Dolphins loss into work Monday, to the point they're just going through the motions and life itself doesn't fully recover till Tuesday. This Dolphins fan likely hates losing at board games and is the person you want on your team when playing trivia. This Dolphins fan definitely has a "Parking for Dolphins Fans Only" sign hanging in the garage.

We all know this person, the one who is fun to be around when the Dolphins win but takes every minuscule play so seriously during the game that watching it with this fan is emotionally draining and unhealthy for us. There's no rehab for Dolphins addicts, but if there were, this person would be a couple of 7-9 seasons away from staying at a place in Boca called "Oasis" to learn how to cope with this unhealthy relationship with the team.
KEEP NEW TIMES BROWARD-PALM BEACH FREE... Since we started New Times Broward-Palm Beach, it has been defined as the free, independent voice of South Florida, and we'd like to keep it that way. With local media under siege, it's more important than ever for us to rally support behind funding our local journalism. You can help by participating in our "I Support" program, allowing us to keep offering readers access to our incisive coverage of local news, food and culture with no paywalls.
Make a one-time donation today for as little as $1.