The moon will be full and there will be yoga: Friday in WPB. Hilton West Palm Beach
Friday

Black Friday shopping or a full moon yoga session? One sounds much more peaceful than the other. Full Moon Yoga at Hilton West Palm Beach will bring some calm to what will likely be a wild day, with Black Friday and a damn full moon and all. So, if you’re looking for something on the opposite end of the loony spectrum, there will be a calm, relaxing and reflective session on Friday evening with Shelly Saunier at the Hilton in WPB. 8 p.m. on Friday at Hilton West Palm Beach, 600 Okeechobee Blvd., West Palm Beach; facebook.com. $10 suggested donation.

This is one of those moments that you could really look back and regret: “I had a chance to see Elton John’s final tour and I missed it.” Don’t let that happen. Sir Elton’s Farewell Yellow Brick Road tour hits the BB&T Center on Friday evening. He’ll be back on March 16, 2019 as well. Both shows are technically sold out but, dammit, you’ll find a way to hear “Tiny Dancer” and “Bennie and the Jets” live one more time, right? 8 p.m. on Friday at BB&T Center, 1 Panther Pkwy., Sunrise; thebbtcenter.com. Tickets start at $132.

Queen Naija’s rise to R&B royalty continues. In 2014, she was cut ahead of the top 30 on American Idol. In 2016, she began her YouTube career, attracting millions of subscribers. In July of this year, she released her self-titled EP, featuring five songs including the sultry smash, “Medicine.” And now, the Detroit native is touring the country, including a stop at Culture Room in Fort Lauderdale on Saturday evening. 7 p.m. on Saturday at Culture Room, 3045 N. Federal Hwy., Fort Lauderdale; ticketmaster.com. Tickets are sold out.

Do your part in setting a sake-related world record. See Saturday.
Kapow Noodle Bar
Calling all shot takers! Last year, Kapow Noodle Bar in Boca set the Guinness World Record for having 221 folks down sake bombs. A group in Texas has since broken that record. Well, now it’s time for Kapow (and you!) to reclaim the title, with a goal of 300 folks partaking in the feat. Show up, down a sake bomb and (hopefully) celebrate at the largest Group Sake Bomb World Record Attempt in Boca Raton. It’s all part of a bigger Movember event, with a performance by Uproot Hootenanny and a street festival, too. 2 to 5 p.m. on Saturday at Kapow Noodle Bar, 431 Plaza Real, Boca Raton; facebook.com. Admission is free.

Fido and Mittens want something to be thankful for this weekend. So, help them purr and lovingly bark, please. Join fellow volunteers on Sunday for the Shelter Shindig at Broward County Animal Care and Adoption Center, featuring 2.5-hour sessions of bathing and walking shelter dogs, playing with kittens, eating pizza and helping dogs with their photos for online listings. Prepare for cuteness overload! 11 a.m. to 1:30 p.m. and 1:30 to 4 p.m. on Sunday at Broward County Animal Care and Adoption Center, 2400 SW 42nd Street, Fort Lauderdale; facebook.com. Free with RSVP.

It won the 2014 Tony Award for "Best Musical Revival'" and Rolling Stone once called it the "Best Rock Musical Ever." Hedwig and the Angry Inch wraps up its stint at The Broward Center on Sunday, directed and choreographed by Patrick Fitzwater. The story tracks rocker Hedwig, who experiences a botched sex-change operation and finds herself along a mesmerizing, rock 'n roll-filled journey. 1 and 6 p.m. on Sunday at Abdo New River Room at the Broward Center for the Performing Arts, 201 SW 5th Ave., Fort Lauderdale; browardcenter.org. Tickets cost $50 to $60. 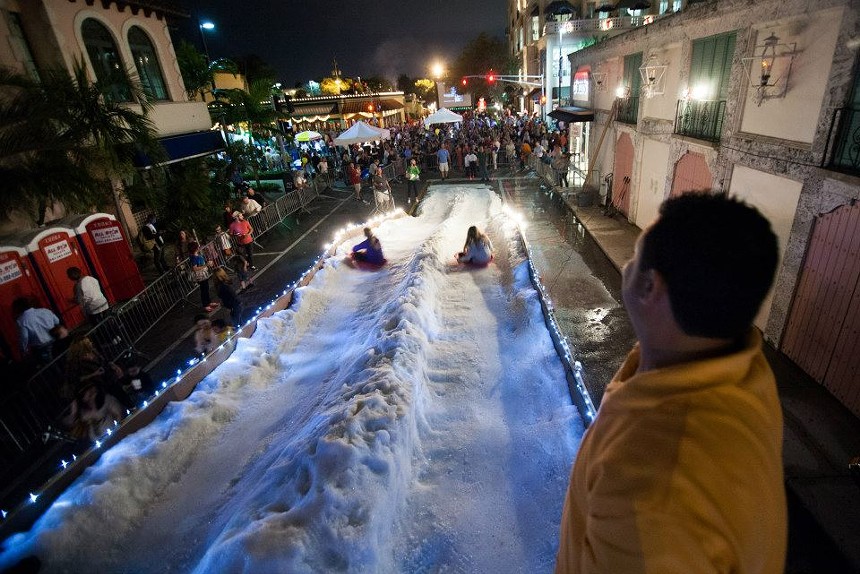 You may not see snow anywhere near our state on Tuesday, but there will be some snow on Las Olas, people! The 55th Annual Christmas on Las Olas is taking over Fort Lauderdale’s main drag with a two-story ice-covered snow slope mountain, a fireworks display, performances by local school choirs, a kid’s zone, photos with Santa and more than 60 vendors. You’re a real Grinch if you’re not in the holiday spirit after this one. 5 to 10 p.m. on Tuesday on East Las Olas Blvd., Fort Lauderdale; lasolasboulevard.com. Admission is free.

Ya know what happens when you leave home to take a photo with Santa? Your pet sits there and cries. So, now it’s your pets’ turn to get a pic with Santa. A Pet Photos with Santa event is going down at Palm Beach Outlets and photos are only 10 bucks, with proceeds benefiting Peggy Adams Animal Rescue. Make sure your pet is on a leash or in a carrier in case they hate Saint Nick. 6 p.m. on Tuesday at Palm Beach Outlets, 1751 Palm Beach Lakes Blvd., West Palm Beach; facebook.com. $10 suggested donation.

Fort Lauderdale’s Rooftop is a great spot for a lot of things: Nice vistas, tasty bites, and carefully-crafted cocktails. Well, now it’s a great spot to watch a movie, too. For its latest movie night, enjoy Home Alone. Ladies can also enjoy free Maison Belle Claire Rosé and everyone can grub on some complimentary popcorn. 8 p.m. on Wednesday at Rooftop, 1 W. Las Olas Blvd., Fort Lauderdale; rooftop1wlo.com. Tickets are $25.

Happy b-day, Saltwater Brewery! The Delray Beach institution is turning five-years-old and isn’t settling for some one-day affair. Saltwater Brewery’s Five-Year Anniversary kicks off on Wednesday with a unique trivia night, where customers will square off against the brewery’s founders, tasting room staff and brewery staff for trivia glory. Throughout the weekend, there will be a BBQ brunch, Wood Aged Beer Tap Takeover and Movember charity fundraiser, among other fun happenings too. Wednesday through Sunday at Saltwater Brewery, 1701 W. Atlantic Ave., Delray Beach; saltwaterbrewery.com. Admission is free.
KEEP NEW TIMES BROWARD-PALM BEACH FREE... Since we started New Times Broward-Palm Beach, it has been defined as the free, independent voice of South Florida, and we'd like to keep it that way. With local media under siege, it's more important than ever for us to rally support behind funding our local journalism. You can help by participating in our "I Support" program, allowing us to keep offering readers access to our incisive coverage of local news, food and culture with no paywalls.
Make a one-time donation today for as little as $1.