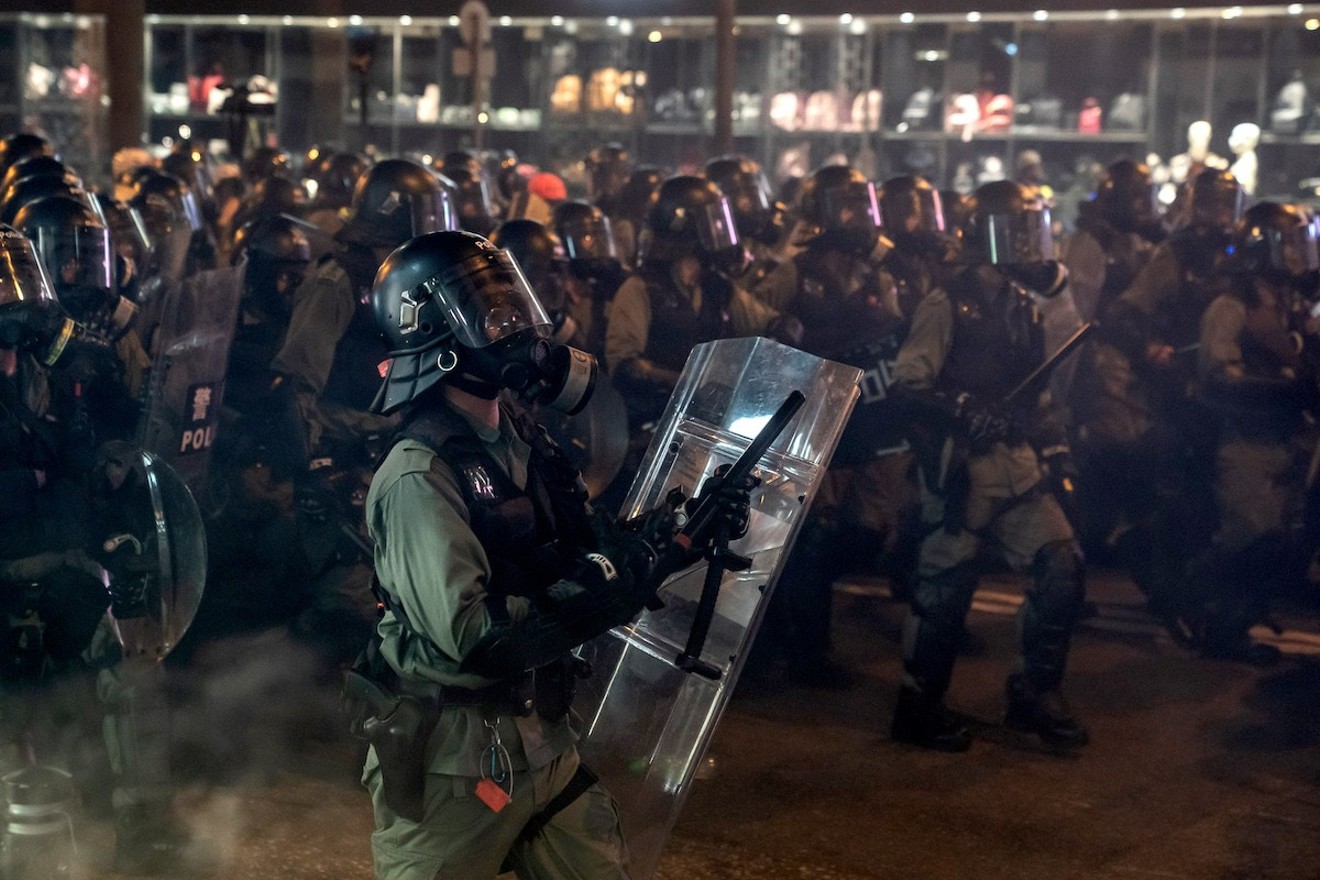 Riot police in Hong Kong on August 4. Anthony Kwan / Getty
Violent clashes between protesters and police in Hong Kong continue weeks after mass demonstrations in the city first turned ugly in June. The unrest, which began in response to a now-shelved bill that would have allowed for the extradition of people to China, has expanded to a wider struggle over Hong Kong's sovereignty and the use of excessive force by law enforcement.

Harrowing scenes of police bloodying protesters by using batons and rubber bullets have become commonplace in the local press and across social media, causing nations such as the United Kingdom to temporarily suspend sales of munitions and crowd-control equipment to Hong Kong police until human-rights concerns are addressed. The United States, another major supplier of nonlethal weapons to Hong Kong, has yet to announce whether it will enact its own export ban.

But for two Florida companies selling riot gear and nonlethal weapons, no ban means more business. Defense Technology, owned by the Jacksonville-based company Safariland, sells nonlethal weapons and riot gear; AMTEC Less-Lethal (ALS), which is part of Pacem Defense Corporation, is run out of Perry, a city about an hour southeast of Tallahassee, and offers similar products. Both have manufactured munitions being used by Hong Kong police to brutalize protesters. Neither company responded to requests for comment from New Times yesterday.

Photos circulated online in recent weeks by journalists and protesters in Hong Kong show sponge-tipped rounds and rubber-bullet casings with branding from the Florida companies. Riot police are reportedly using ALS's 1202 rubber rocket, a projectile made of rubber and plastic to produce "blunt trauma and pain compliance," according to the manufacturer. It is fired from a riot gun and has a range of about 120 feet.


ALS equipment was reportedly used on U.S. protesters during the 2014 riots in Ferguson, Missouri. Pacem Defense purchased ALS last October with the intent of expanding into "emerging markets" in the Middle East, Africa, East Europe, and Asia.


Something we found on Lung Wo Road, not sure #ExtraditionBill pic.twitter.com/j8L0mapxJs

Safariland's sponge-tipped munitions, which might sound tame, are not as dangerous as rubber bullets but can still cause serious damage. Designed for situations in which "maximum deliverable energy is desired for the incapacitation of an aggressive, non-compliant subject," Safariland cautions that the rounds should be shot at only the "buttocks, thigh, and even the knees of the subject." The optimal range for the munition is five to 40 meters (about 16 to 131 feet), according to the manufacturer.

In addition to being used in the Ferguson protests, Safariland equipment was used last year on protesters against the Dakota Access Pipeline in North Dakota. And last November, Safariland's tear-gas canisters were thrown by U.S. Customs and Border Protection agents at immigrants seeking asylum at the southern border.

Though rubber bullets and sponge-tipped rounds are considered nonlethal, they can easily kill or maim a person if used improperly. Photos from the Hong Kong protest show police, at dangerously close distances, firing indiscriminately at protesters. But even when used as intended, rubber bullets and other anti-riot munitions have an incredibly poor track record due to their inaccuracy. A meta-analysis of 26 studies published from 1990 to 2017 shows the use of such projectiles caused significant morbidity and mortality. Of the close to 2,000 injured people identified in the analysis, more than 50 died as a result of their injuries and 300 suffered permanent disability. The majority of injuries resulting from anti-riot projectiles were considered severe.


Riot Police fired bullet to protestor in railway station within 1 meter. Can anyone tell me Riot Police are trying to murder or not? They are just protestors leaving the protest zone peacefully. #HKPoliceState pic.twitter.com/5l2tMIz2oJ

"These steps are a necessary response to credible reports of excessive force being used by the Hong Kong police targeting individuals engaged in peaceful demonstrations against the Hong Kong Government’s proposed extradition bill and the fast-eroding space for political participation," they wrote in their letter, making clear U.S. officials should not label the protests "riots."

In Hong Kong, demonstrations against the controversial extradition proposal began as early as March and continued to grow in size into June as the bill moved closer to passage. Critics feared the legislation would allow China's government to extradite political dissidents and infringe on the human rights of Hong Kong's residents. Massive protests June 9 and 12 drew hundreds of thousands of people to the streets of Hong Kong. The June 12 protests quickly grew violent as police used tear gas, pepper balls, and rubber bullets on crowds of people. Thereafter, protesters began to include an independent investigation into police brutality as part of their demands.

The bill was suspended June 15 by embattled Hong Kong Chief Executive Carrie Lam but has yet to be fully withdrawn. Nearly one month later, protesters are still on the streets demanding the government stop describing their demonstrations as riots and free all protesters arrested by police.

“The Hong Kong police have once again demonstrated how not to police a protest," Amnesty stated. "Violence directed at police does not give officers a green light to operate outside of international policing standards."
KEEP NEW TIMES BROWARD-PALM BEACH FREE... Since we started New Times Broward-Palm Beach, it has been defined as the free, independent voice of South Florida, and we'd like to keep it that way. With local media under siege, it's more important than ever for us to rally support behind funding our local journalism. You can help by participating in our "I Support" program, allowing us to keep offering readers access to our incisive coverage of local news, food and culture with no paywalls.
Make a one-time donation today for as little as $1.