Aldi offers affordable groceries thanks to its in-store brand that covers a number of products. Photo courtesy of Aldi
Aldi landed in Sunrise with its newest Florida store. The recently opened outpost is one of a growing list of South Florida locations since the grocer first arrived in the state in 2008.

In the past decade, Aldi — which is based in Germany but has an interesting shared past with Trader Joe's, believe it or not — has expanded its footprint to more than 150 stores statewide. At present, there are 39 Aldi stores in Palm Beach, Broward, and Miami-Dade counties.

Nationwide, Aldi is on pace to become the nation's third-largest "value" retail grocer, operating more than 2,000 stores in 36 states. Recently, Aldi has invested more than $5 billion in a multiyear initiative to open hundreds of new locations.

Of the 70 new stores opening across the U.S. this year, a number are in South Florida, including locations slated to open by the end of the year in Princeton, Kendall, Fort Lauderdale, and Loxahatchee Groves. (Those interested in applying for a position should visit Aldi's career website.)

"As we continue to expand, we promise to do everything in our power to offer the lowest prices, every day, without exception," Jason Hart, CEO of Aldi U.S., said in a press release. "In fact, as food costs continue to rise across the country, we're lowering prices on hundreds of items to meet our customers' increased need for savings."

The grocer's no-frills approach to shopping keeps overhead low — meaning they can afford to sell items like its fresh white bread for about 89 cents, a huge savings from the average retail price of $2.46 for white bread in the U.S., according to numbeo.com.

That also means Aldi doesn’t offer bags at checkout, so make sure to bring your totes. And bring change to "rent" a cart for a quarter. (You get your quarter back when you return the cart to its dock.) 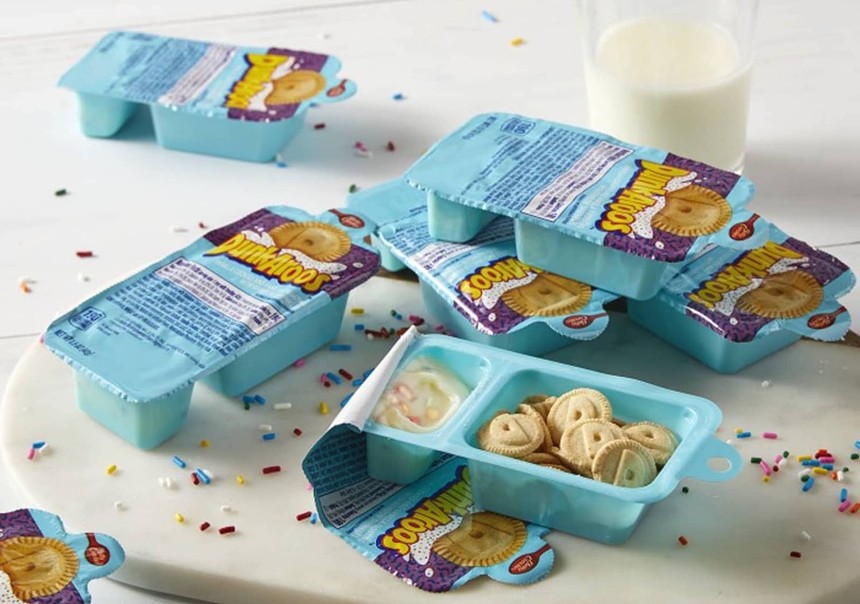 Aldi features 90 percent in-store brands but also offers special items like August's release of the 90's treat Dunkaroos.
Photo courtesy of Aldi
According to Chris Hewitt, vice president of Aldi's Royal Palm Beach division, the Florida expansion goes hand in hand with the company's push to increase its fresh-food selection by 40 percent over the past few years.

"Healthy indulgences are trending, so we moved quickly to become one of the first grocery stores to offer our own lines," Hewitt tells New Times. "We are very proud of our brands. The lines are continually growing and we’re adding more items every month."

If you're not familiar with German-owned Aldi, get excited for random items that make seasonal or once-yearly appearances, like the Dunkaroos that debuted earlier this month.

Dunkaroos and other exclusive brands like Fit & Active and LiveGFree make up more than 90 percent of Aldi's product selection. The grocer even has its own brand of protein-rich, oat-based ice creams.

Some of the more popular lines have even won awards, such as SimplyNature, whose pantry items include cereal, milk, and plenty in between — many of which are organic and non-GMO, and all of which are free from artificial colors, flavors, or unnecessary enhancers. There's even a line of baby products named Little Journey — affordably priced baby essentials that range from newborn diapers, training pants, cleansing wipes, and baby wash to formula and snacks.

The real hidden gem might be Deutsche Kuche, Aldi's German line of German-made products, which offers beer, chocolate, and uncured Bavarian bratwurst for less than you'll find anywhere else.

"Offering the best products at affordable prices is something that never goes out of style," says Hewitt. "We look forward to offering Florida customers more as we grow the Aldi footprint over the coming years."

Aldi. 8075 W. Oakland Park Blvd., Sunrise; 855-955-2534; aldi.us.
KEEP NEW TIMES BROWARD-PALM BEACH FREE... Since we started New Times Broward-Palm Beach, it has been defined as the free, independent voice of South Florida, and we'd like to keep it that way. With local media under siege, it's more important than ever for us to rally support behind funding our local journalism. You can help by participating in our "I Support" program, allowing us to keep offering readers access to our incisive coverage of local news, food and culture with no paywalls.
Make a one-time donation today for as little as $1.