It was the mid-90's, and she was helming the kitchen at Norma's on the Beach. The then-new restaurant was the brainchild of Delius Shirley, son to the famous Jamaican chef Norma Shirley — a woman whom Food & Wine magazine had recently dubbed "the Julia Child of the Caribbean." At the time, she recalls feeling as though she had big shoes to fill.

Hutson had met Delius earlier that year through work. She was importing coffee and other items from Jamaica; he was traveling to Miami sourcing hard-to-find ingredients for his mother's Montego Bay restaurant. At the time, the single mother of two had no idea he would become both her life and business partner.

In those days, Delius had his eye on Miami's burgeoning South Beach scene, Hutson tells New Times. When he asked her to assist with finding a location for his dream endeavor, she helped, finding an affordable space off Lincoln Road. When it came time to build the menu, Delius asked Hutson for her help once again — this time to be the chef at the eatery he named after his mother.

With an inherited passion for cooking but no formal training, Hutson was reticent to take the role at her friend's new venture. After some prodding — and plenty of unwavering support for her home-cooked meals — she acquiesced, taking the helm of the meager 100-square-foot kitchen to offer Jamaican-inspired fare in the heart of Miami Beach.

"It was all his fault," Hutson says of her introduction into life as a professional chef. "I cried every day for three months straight in the beginning. It was such hard work, and I didn't really know that I was doing anything right."

Things changed after USA Today did a story on up-and-coming Lincoln Road, calling Norma's the "jewel of the Caribbean." Hutson recalls the writer raving about the food, unaware it wasn't actually Norma in the kitchen. And just like that, the novice chef had her answer: "I stopped crying that day. Then I knew I was doing it right," she laughs.

In the early days, Hutson's dishes were simple, inspired by her travels and time spent in Jamaica. Her most-lauded dishes included Red Stripe beer-steamed Mediterranean mussels; a bowl of clams in a spicy broth flavored with shallots, scotch bonnet peppers, and Jamaican thyme; a West Indian bouillabaisse rife with local shrimp, mahi, and grouper prepared in a piquant coconut curry broth and served over an aromatic Jasmine rice; and jerked double pork chops with a guava rum sauce. 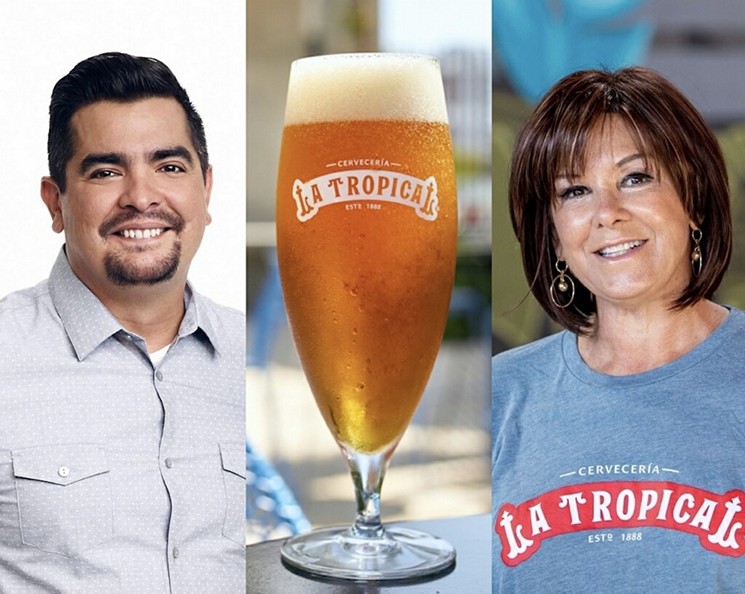 This month Johnny Sánchez chef/owner Aarón Sánchez will join Miami Chef Cindy Hutson for the first beer dinner event hosted by the South Beach Wine & Food Festival.
Photo courtesy of Brustman Carrino Public Relations
Hutson truly hit her stride in 1999 when she and Shirley closed Norma's to make way for Ortanique on the Mile, their new venture in Coral Gables. With a larger kitchen and several years' experience under her belt, the young chef expanded her repertoire to offer internationally inspired dishes given a quintessentially nouveau-Caribbean twist.

Another round of rave reviews touted Hutson’s cuisine as some of the best Caribbean food in South Florida. The praise helped to propel her into culinary stardom for her culturally diverse, seasonally inspired menu that focused on "everything under the sun" — a style she later deemed the "Cuisine of the Sun," because there wasn't a single culture she could name to describe her cooking.

In early July, four months into the pandemic, the couple bid a final farewell to Ortanique. But Miamians can still enjoy the culinary fruits of the chef's unique cultural fusion at two-month-old Cerveceria La Tropical in Wynwood. (Hutson still owns a restaurant in Jamaica, Zest.)

Here, as executive chef, Hutson has imbued the brewery's menu to reflect her unique, Caribbean-centric style. Many of the recipes are former Ortanique specials, with the menu reading like her own "best-of." Favorites include her "Frita Cubano" burger slathered in a house tomato marmalade, Cuban sandwich empanadas, a roasted jerk half-chicken that features her signature tamarind-infused jerk sauce; and a reboot of Hutson's famed mussels, here prepared with the cerveceria's "Nativo Key" IPA.

"To do this type of food in a high-volume atmosphere is a welcome change from the white tablecloth dining I was used to for the past twenty-something years," she says. "People are loving it, and happy they can still get a taste of Ortanique."

This month, Hutson will celebrate her "Cuisine of the Sun" with a wider audience when she hosts the South Beach Wine & Food Festival's Cerveceria La Tropical Beer Dinner alongside Aarón Sánchez, the author and TV personality behind the New Orleans- and Baltimore-based taqueria, Johnny Sánchez. The festival's first-ever beer pairing dinner takes place on Friday, May 21, as part of the American Airlines Dinner Series.

"I'm looking forward to it. Everyone who attends will get a five-course beer dinner featuring our best dishes, along with beers from Cerverceria La Tropical," Hutson tells New Times. "It's going to be a lot of fun."

Beer Dinner at Cerveceria La Tropical. 42 NE 25th St., Miami; Friday, May 21, from 7 to 10 p.m. Tickets cost $200 via sobewff.org/cerveceria.
KEEP NEW TIMES BROWARD-PALM BEACH FREE... Since we started New Times Broward-Palm Beach, it has been defined as the free, independent voice of South Florida, and we'd like to keep it that way. With local media under siege, it's more important than ever for us to rally support behind funding our local journalism. You can help by participating in our "I Support" program, allowing us to keep offering readers access to our incisive coverage of local news, food and culture with no paywalls.
Make a one-time donation today for as little as $1.