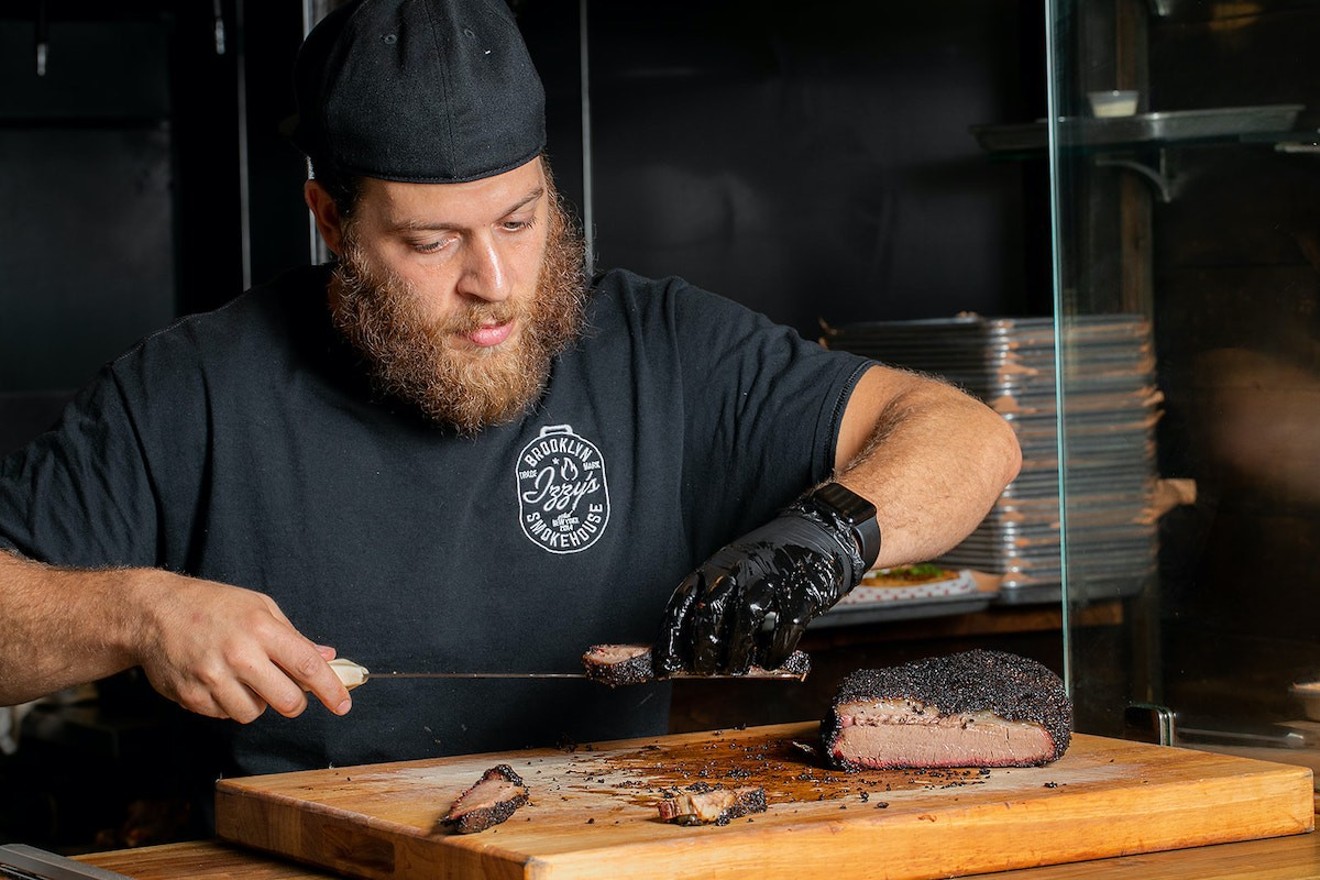 Starting this month, he's bringing his kosher-friendly menu to Miami.


"With all the restrictions and constraints in New York City, coming to Miami felt like the right fit at the right time," says Eidelman, who has plans to relocate to the area with his wife part-time. "We happen to be kosher barbecue, but we have plenty of people who come in who aren’t kosher and say, ‘This is one of the best barbecues I’ve ever had.’ My goal is to share this barbecue with the community — not just the Jewish community."

This month, Izzy's will open its third location — and the first in Florida — in Aventura. The kosher barbecue joint is set to officially open the last week of October in the Waterways Shoppes. The newly renovated space will serve top-quality kosher meats smoked on the premises in an all-wood smoker and finished on a live-fire wood-oven pit.

Described as Texas-style with a Brooklyn-Jewish twist, the menu is 100 percent kosher. Izzy himself keeps kosher and wanted to offer a sublime barbecue experience to others.

Izzy's smoked beef ribs
Photo courtesy of Izzy's Brooklyn Smokehouse
It matters not whether you keep kosher. Nearly any meat lover can appreciate Eidelman's star menu item, an 18-hour smoked brisket seasoned with salt, pepper, and a touch of paprika.

"Brisket is king, and brisket is kosher. It's what I can relate to the most, and — for me — is the best form of barbecue out there," Eidelman tells New Times.

When the judges for the 2017 Brisket King of NYC competition tasted Izzy's Brooklyn Smokehouse — among them Jake Dell of Katz’s Deli — their decision was unanimous. According to Eater food writer and Meat Show host Nick Solares, it was easy to crown it the best in New York City. Izzy's did it again two years later, taking home the top prize at Rib King NYC 2019 for massive beef ribs that bested the pork competition.

How does a kid from Brooklyn who keeps kosher create award-winning barbecue? Through sheer force of will.

Eidelman says he was introduced to good barbecue by the Wandering Que, a kosher barbecue pop-up led by Texas-born pit boss Ari White. After hours of taste-testing — and close to $300 worth of food — he was smitten.

"My life changed at that moment, and I was obsessed with smoking, wood-fire cooking, and barbecue," says Eidelman, who visited most of the nation's top barbecue destinations to learn what he could before attempting to replicate their cooking at home. "Even if I couldn't taste it, I still wanted to try great barbecue, and today that's what drives me to deliver the best I can. Five years later, I'm still constantly learning to improve my craft."

Completely self-taught, Eidelman, 34, started cooking in his backyard in 2013, beginning with a gas grill before graduating to a wood-burning smoker. Two years later, he opened his first restaurant in Brooklyn's Crown Heights neighborhood, followed by a second location on Manhattan's Upper West Side. 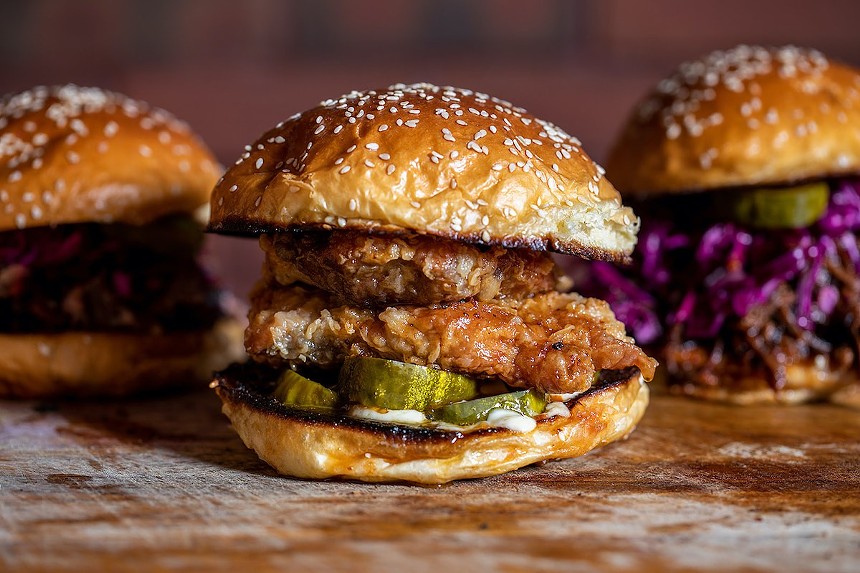 Izzy's Brooklyn Smokehouse sandwiches include a popular fried smoked chicken sandwich and a pulled beef topped with coleslaw, pickles, and the house barbecue sauce.
Photo courtesy of Izzy's Brooklyn Smokehouse
Izzy's menu focuses on a variety of kosher meats sold by the half-pound, from brisket to smoked chicken to pulled beef. Many are also featured in rice-based bowls, as tacos, or atop nachos, while others are part of super-sized sandwiches like the popular fried smoked chicken and a Polish sausage topped with house-made chili and coleslaw. Still more are featured as specialities, like the house "dino" beef short ribs, a two-week brined and smoked pastrami, and smoked lamb ribs.

"A lot of people think you can take any food and give it a blessing and it becomes kosher, but that's not how it works," says Eidelman, noting that the Miami menu will launch with a limited meat selection as operations ramp up over the coming months.

Sourcing from strictly kosher vendors can become a pricey endeavor, he adds, but it also yields high-end cuts that deliver in texture and flavor alike. The kosher process requires a number of checks, from inspecting the animal to ensure it's humanely raised and disease-free to using select cuts (front- and hind-quarter cuts, for example are not sold as kosher).

At Izzy's, of course, you'll find no pork. But Izzy's pulled beef offers a comparable twist to the traditional barbecue favorite. And Eidelman is excited to welcome Miamians to his new Izzy's space in Aventura.

"The most exciting part about coming to South Florida is being able to have an open kitchen and the ability to cook over a live fire," he says. "I'm really looking forward to being able to share that with Miami."

Izzy's Brooklyn Smokehouse. 3585 NE 207th St., Aventura; 305-690-7103; izzyssmokehouse.com. Opening late October 2021.
KEEP NEW TIMES BROWARD-PALM BEACH FREE... Since we started New Times Broward-Palm Beach, it has been defined as the free, independent voice of South Florida, and we'd like to keep it that way. With local media under siege, it's more important than ever for us to rally support behind funding our local journalism. You can help by participating in our "I Support" program, allowing us to keep offering readers access to our incisive coverage of local news, food and culture with no paywalls.
Make a one-time donation today for as little as $1.