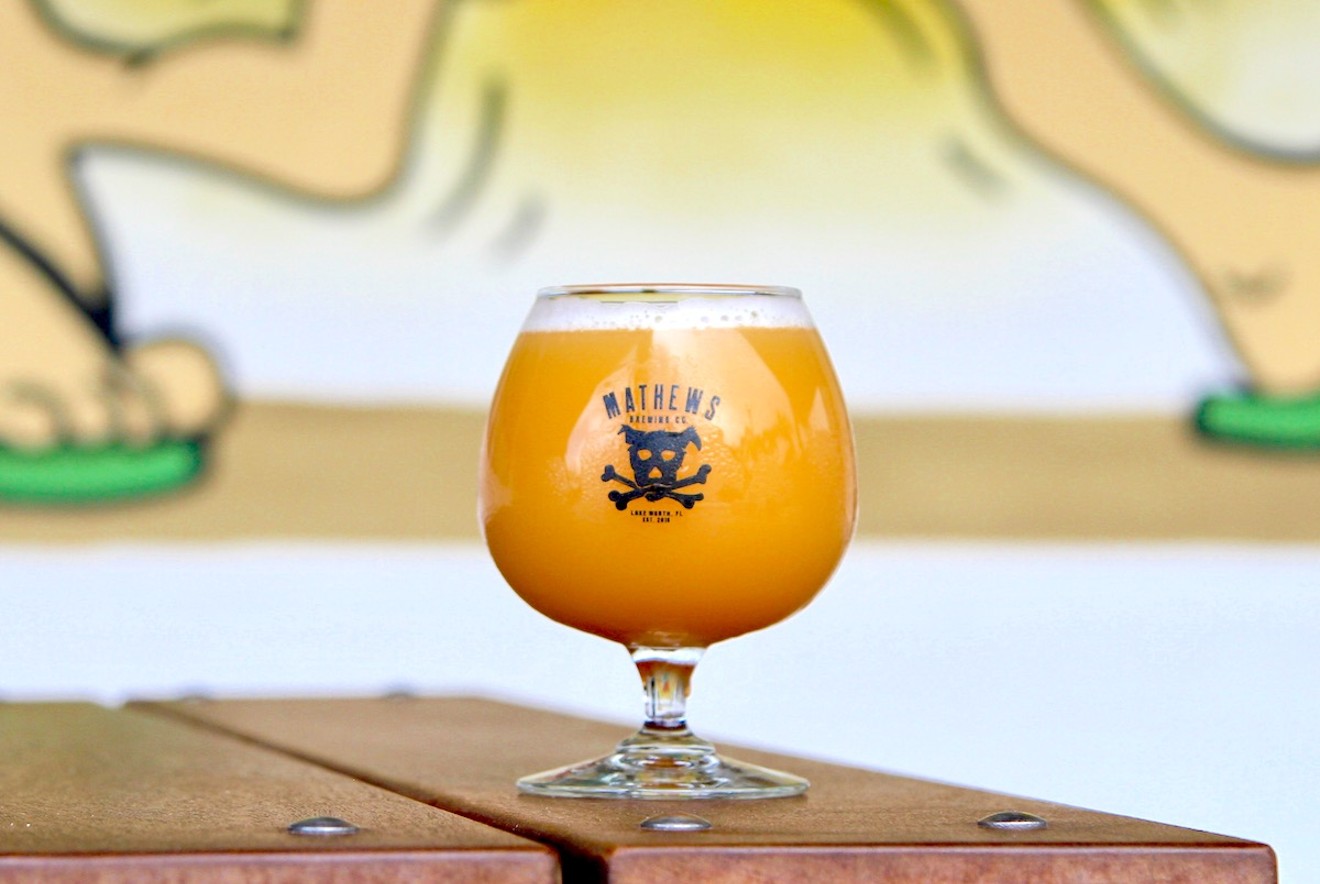 Florida Haze IPA from Mathew's Brewing Co. in Lake Worth. Photo by Nicole Danna
This week, beer lovers across the nation will celebrate National IPA Day, an official cheers to one of craft beer's most iconic — and popular — styles. Founded in 2011, IPA Day is a global celebration of hoppy beer made famous for its resiliency during long sea voyages by ship from England to India, hence the term IPA, short for "India pale ale." Today the holiday has expanded into a worldwide celebration boasting thousands of international IPA-themed events. From hazy, New England beers to traditional American, double and even sour styles, hoppy brews continue to be the primary growth driver of craft beer.

But what makes a good IPA? The Brewers Association recognizes only two types of IPA, the flagship style of the American craft beer movement: American IPA and imperial IPA (or double IPA, abbreviated DIPA), each brewed with American-grown hops known for their citrusy, bitter, piney aromas. In South Florida, a number of breweries offer their own takes on the craft creations. From sour and hazy, to brut- and milkshake-inspired, here are the ten best IPAs from Palm Beach to Broward County. 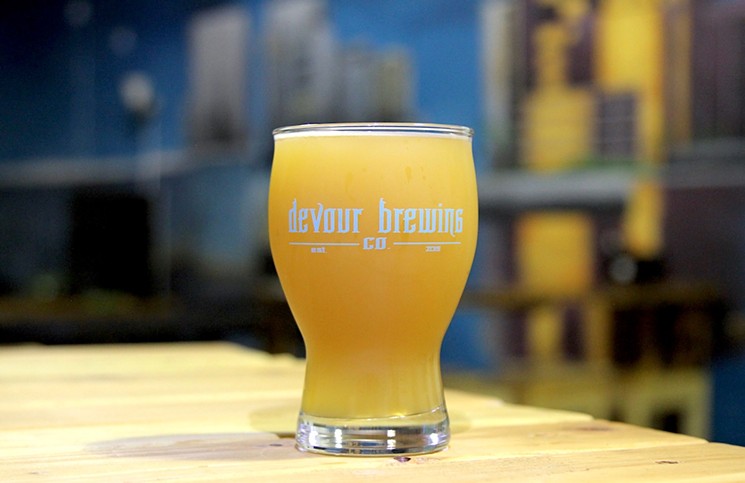 Photo by Nicole Danna
1. Visual Chaos New England-style IPA, Devour Brewing Company. In Palm Beach County, Devour Brewing Company head brewer and owner Chip Breighner is producing a number of IPAs that stand as some of the best in the tri-county area. Among the hop heads, Devour is especially well-known for its Northeast-style IPAs with a lineup that includes hazy offerings such as his Woolbright Pale Ale, Visual Chaos IPA, and Shadow Walker double IPA. What sets Devour IPAs apart from others: a full-bodied mouthfeel, fragrant hop aroma, well-balanced flavor, little hop bitterness, and a beautiful opaque milky-golden haze that just won't quit. Of course, fans love his mango IPA and new Lu's Brew Session New England IPA, too (the second brewed especially for Papa's Raw Bar in Lighthouse Point). It's the Visual Chaos IPA, however, that's most popular: brewed with hops in the whirlpool, then dry-hopped with a combination of Citrus, Mosaic, and Belma hops. 1500 SW 30th Ave., #4, Boynton Beach; 561-806-6011; devourbrewing.com. 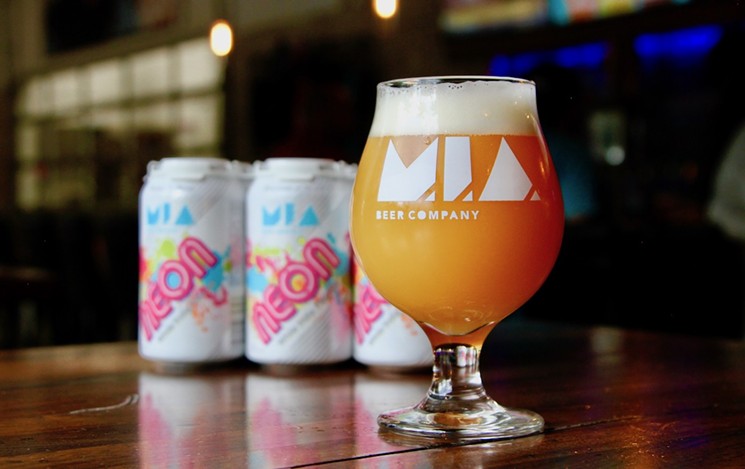 Photo by Nicole Danna
2. Neon White IPA, MIA Beer Company. Neon was first brewed in September 2016 by MIA's former head brewer Mike (now with Gulfstream Brewing in Fort Lauderdale). The recipe was inspired by another MIA beer, El Cuco; what began as a lighter version of today's stronger Neon, clocks in at 7.5 percent ABV. This cloudy and citrusy wheat beer is brewed with Pilsner malt and white wheat, officially classifying it as a white IPA, and the addition of the wheat gives the beer its cloudy haze. MIA founder Eddie Leon describes this specialty-style beer, which he recently began canning, as "juicy, but without any actual juice." It's thanks to the use of only Citra hops, employed for both bittering and aroma, which develops into a smooth, floral, and citrusy flavor. 10400 NW 33rd St., Doral; 305-567-5550; mia.beer.

Photo by Nicole Danna
3. Juice Imperial IPA, Civil Society Brewing Company. Any self-respecting South Florida hop-head knows where to find the region's best IPAs: Civil Society Brewing Company in Jupiter. Though the brewery is best known for its flagship IPA, Fresh, fans most covet its one-offs, such as the brewery's experimental Subject Series and its frequent collaborations with both local and nationally recognized brewers. For those who want something a little more accessible, however, try Juice. Head brewer Karl Volstad says he's been making Juice since his early homebrew days, and not much has changed since then. Brewing its IPA with flaked oats for a hazy body and a combination of Colombus, Amarillo, and Mosaic hops, the Civil team has changed the recipe only once by adding lupulin powder — a purified concentration of the resin compounds and aromatic oils in whole hop flowers — to create a more complex flavor profile. 1200 Town Center Dr., #101, Jupiter; 561-855-6680; civilsocietybrewing.com. 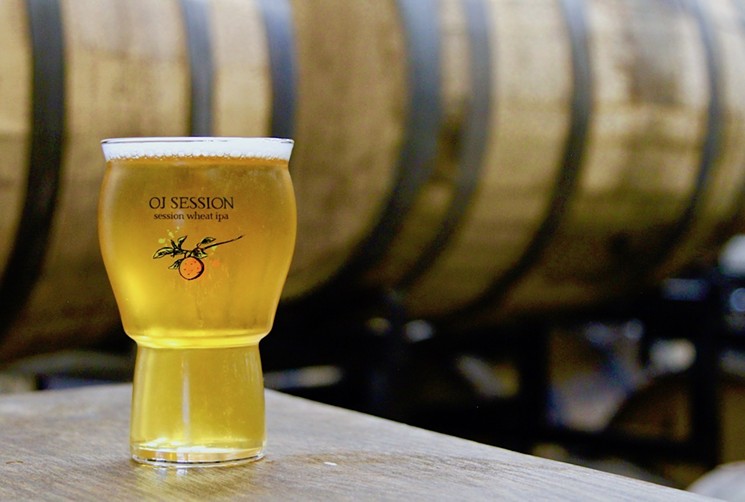 Photo by Nicole Danna
4. OJ Session IPA, Bangin' Banjo Brewing Company. Sometimes you just want an easy-drinking beer, that's also an IPA, and if you drink an entire six-pack by yourself, won't put you into a hop-induced coma. That's what you'll get with Bangin' Banjo's OJ Session IPA. Although it's a little lower in ABV and IBUs than the typical American IPA, that's also what makes it a true session beer: it's much easier to drink than most IPAs. The secret ingredient here is the sweet orange peel owner and brewer Adam Feingold adds to the beer during the boil to enhance the citrusy flavor while adding a touch of sweet. A supporting cast of orange, pine, and citrus notes pair perfectly with a medium-light mouthfeel, and finishes dry, making this beer super smooth and easy-drinking. 3200 NW 23rd Ave., Pompano Beach; 954-978-3113; banginbanjobrewing.com. 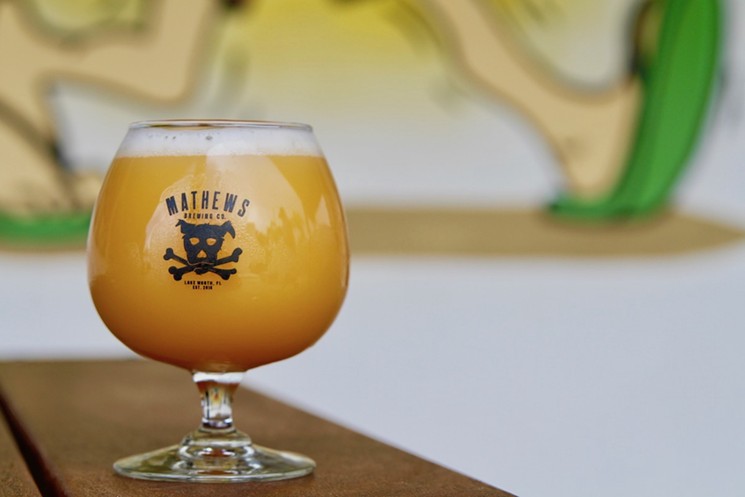 Photo by Nicole Danna
5. Florida Haze New England IPA, Mathew's Brewing Company. Lake Worth's first brewery, Mathew's Brewing Co. offers up a large selection of core beers from a cream ale to Irish dry stout on nitro — even a full lineup of traditional British-style cask ales. But those close to and brewer Dave Mathews know his true passion is brewing IPAs. Specifically, a passion for brewing some seriously hazy New England-style IPAs. Although his one-off New England-style DIPA known as Radius is set to become a flagship brew, you can always find his standard NEIPA, dubbed Florida Haze, on draft in the taproom. Brewed with a combination of Warrior, Galaxy, , and Amarillo hops, it pours a deep orange hue and offers a nose full of citrus. 130 S. H St., Lake Worth; 561-812-3738; mathewsbrewingcompany.com.