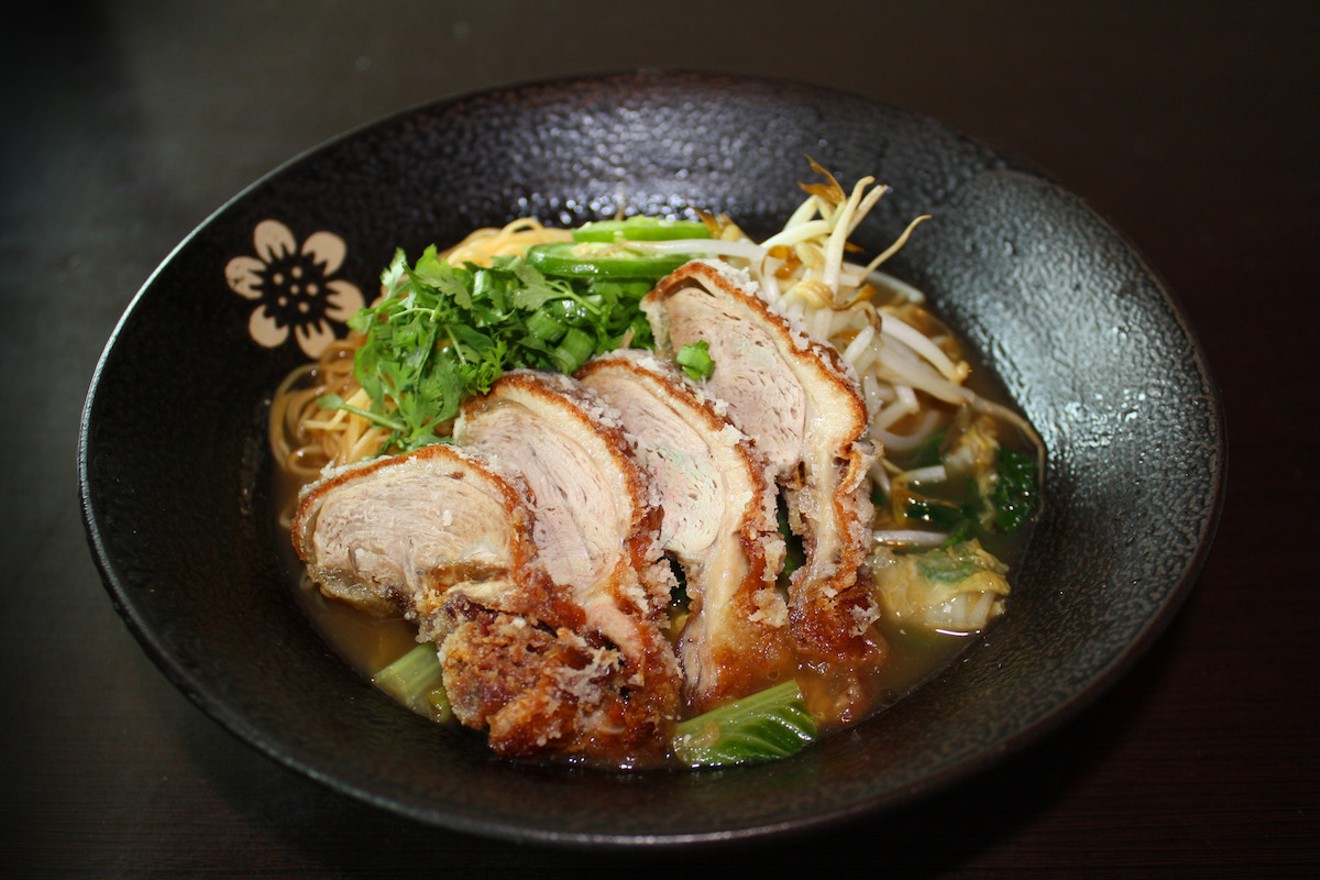 Crispy duck noodle soup from Casa Sensei. Courtesy of Casa Sensei
When Casa Sensei opens in downtown Fort Lauderdale next month, it won't be your average Asian-inspired dining experience. Expect to be greeted with a complimentary bowl of chili-spiked popcorn upon seating before ordering specialties like Peking duck; then take a gondola ride and finish your meal with a bright blue cotton candy cone.

Slated to open this November off Las Olas Boulevard overlooking the Himmarshee Canal, Casa Sensei bills itself as a culturally immersive eatery that combines Pan-Asian flavors with the dynamic flare of Latin American dining.

"Casa Sensei’s menu puts a unique twist on authentic Asian dishes thanks to modern influences inspired from Latin America; an idea to make dining here more stimulating," said Casa Sensei owner Victor Diaz, who traveled extensively across Asia to draw inspiration for the menu and the restaurant’s unique interior design. “The innovative menu is complimented by an equally impressive presentation." Casa Sensi will offer freestyle sushi.
Photo courtesy of Casa Sensei
While there are other options for Asian fare or sushi on Las Olas, Casa Sensei will be the only eatery offering Asian cuisine that represents multiple countries and cultures, including Diaz's own take on "freestyle" or contemporary sushi rolls alongside dishes from Thailand, Vietnam, Korea, China, and Japan.

Taking over the space previously occupied by Bao Bar + Asian Kitchen, the space pays homage to the previous menu by keeping some of the former longtime eatery's most popular dishes including its traditional Peking duck, dim sum, beef red curry, duck fried rice — and, of course — bao buns.

Casa Sensei's 33-square-foot bar is one of the longest on Las Olas, boasting an eclectic cocktail menu with a rare selection of sakes and Japanese whiskies such as Kavalan Bourbon Cask and Hibiki Suntory Whisky, in addition to specialty cocktails.

Casa Sensei is nestled along the picturesque Himmarshee Canal, allowing guests a unique opportunity to break from dinner for a gondola ride in partnership with Riverfront Gondola Tours. Patrons can reserve a private dinner cruise on one of the three eco-friendly and electric-powered boats that seat up to six people. The 90-minute gondola ride offers views of stunning waterfront homes, tropical foliage and South Florida wildlife, including manatees, peacocks, iguanas, and exotic birds. Priced at $37 per person (plus a dish off the Casa Sensei menu), tours will run nightly at 7, 7:15 p.m., and 7:30 p.m. Private options are also available.

Casa Sensei. 1200 E. Las Olas Blvd., Fort Lauderdale; 954-530-4176.
KEEP NEW TIMES BROWARD-PALM BEACH FREE... Since we started New Times Broward-Palm Beach, it has been defined as the free, independent voice of South Florida, and we'd like to keep it that way. With local media under siege, it's more important than ever for us to rally support behind funding our local journalism. You can help by participating in our "I Support" program, allowing us to keep offering readers access to our incisive coverage of local news, food and culture with no paywalls.
Make a one-time donation today for as little as $1.