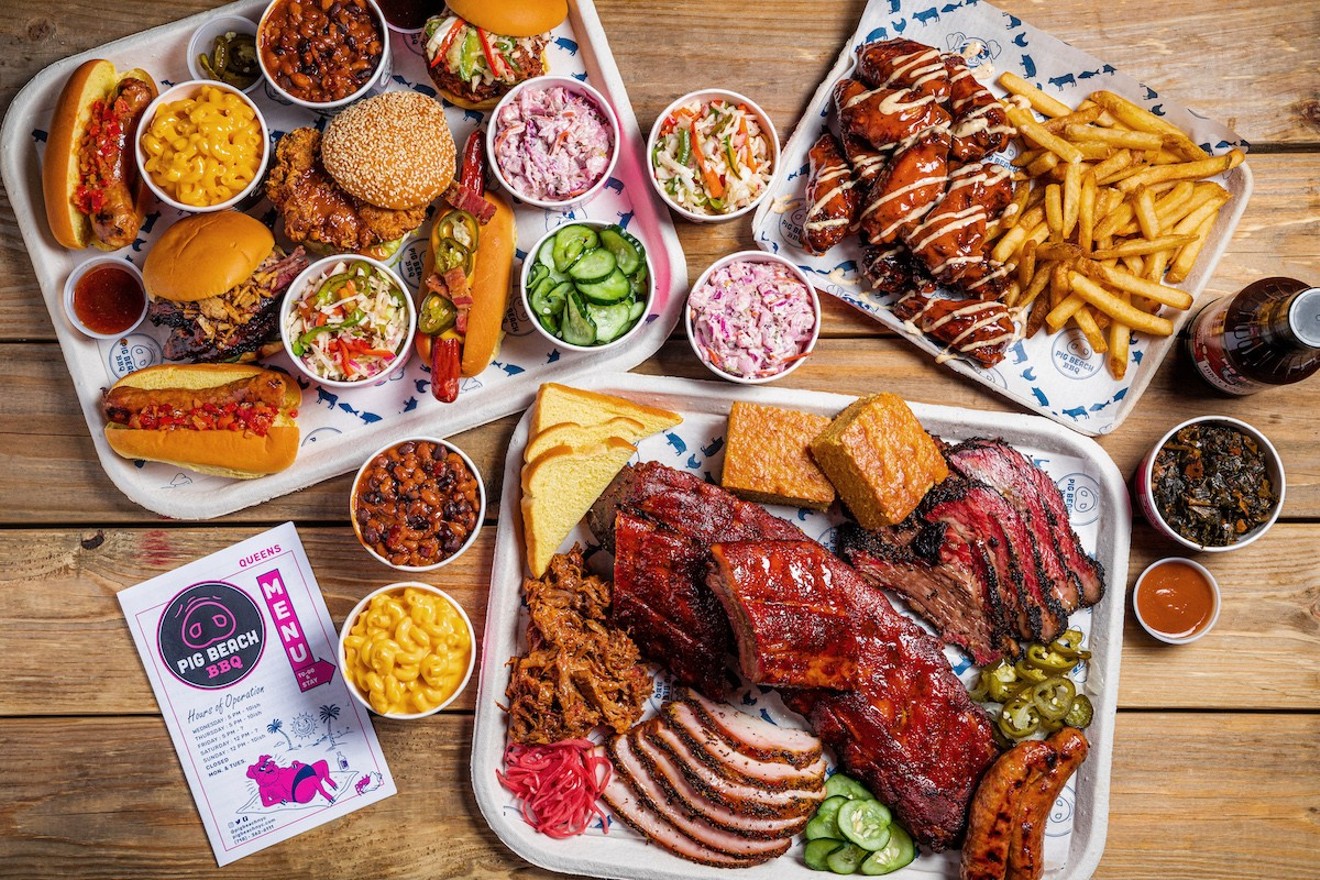 The full spread at Pig Beach BBQ in West Palm Beach Photo courtesy of Pig Beach BBQ
When Pig Beach cofounder Rob Shawger was brainstorming names for his barbecue restaurant located along the banks of the Gowanus Canal in Brooklyn, he couldn’t help but conjure images of the notorious swine known to bask in the crystal blue waters of the Exumas.

“We had found this location along one of the world’s dirtiest waterways — basically a parking lot full of junk and abandoned cars — and I remember standing there trying to envision a more beautiful view,” Shawger tells New Times.

Several months later, the longtime investor at some of New York’s most lauded fine-dining restaurants — Carbone among them — saw his vision come to life. That summer, Pig Beach BBQ drew crowds from across the five boroughs, foodies eager for a taste of two well-known New York City chefs’ take on traditional barbecue.

What began as a 2015 popup quickly became a seasonal establishment and bar that transformed that neglected parking lot into one of the city’s most popular outdoor eateries. It’s since grown into a critically acclaimed permanent fixture beloved by the area's barbecue enthusiasts, best known for the brisket, pulled pork, beef ribs and — unlike most barbecue joints — its strong drinks.

After just one season, Shawger and his pitmaster partners — chefs Matt Abdoo and Shane McBride — took the leap of faith. Despite posts at the helm of some of Manhattan’s most prestigious kitchens, the two-chef team risked it all to pursue smoked-meat mastery.

“I remember thinking, ‘I’m leaving a $14 million kitchen to do this.’ But it was just something I had to do,” says McBride, who held long tenures as executive chef at Tom Colicchio's Craftsteak and Keith McNally’s famed Soho brasserie Balthazar.

For Abdoo, who left Del Posto as chef de cuisine, a competitive barbecue team win alongside Shawger was enough to stoke the fires of inspiration. After their 2015 Memphis in May World Championship first place poultry and second place whole hog titles, he was hooked.

Luckily, it wasn’t a bad move. These days, Pig Beach is in expansion mode following a second location in Queens, a third in South Florida, and the fourth set for Louisville, Kentucky by the end of the year.

Both Shawger and Abdoo are Palm Beach County residents, making their expansion south an easy choice. For Miamians, the Florida outpost is easily accessible — less than ten minutes from the heart of downtown West Palm Beach and the city’s Brightline station — delivering the same wildly popular meat-centric Pig signatures served up with a beach twist.

The three say they chose West Palm Beach’s up-and-coming restaurant row over Miami, converting a mechanics shop at the edge of the city’s NoRa District into a custom-designed 4,000 square foot space that boasts an open concept kitchen offering guests a glimpse at the meat-smokin’ action.

Two full bars — one outside and one inside — supply a steady flow of good beer, decent wine, and quickly made cocktails served in plastic cups. Strollers, parents, and toddlers are everywhere.

The location is also home to two massive Ole Hickory Pits outdoor smokers that smoke the chefs’ signature meats — up to 120 racks of ribs — over cherry, hickory, oak, and pecan woods.

On a recent dine, New Times experienced Pig Beach's barbecue spread that, for Abdoo, is more about the nuance of technique, and less about being regionally true to style.

“Texas has brisket. Memphis has ribs. In Kansas City it’s burnt ends. And in Carolina it's all about the mop sauce and pulled pork,” says Abdoo. “But, no matter where you go, it all tastes unique. That’s what is fascinating to me about barbecue. There are so many ways of doing the same thing within the parameters of salt, pepper, heat, and smoke."

Take the pork shoulder, smoked over hickory and cherry after a salt pepper dry brine. From there, it's generously seasoned with Pig Beach BBQ seasoning, garlic, and onion before utilizing a technique the chef calls "redneck sous vide" — the whole ordeal is shrink-wrapped in plastic and aluminum foil to lock in moisture. The process produces the most tender and flavorful pulled pork you'll find this far south, served in heaping fat-riddled clumps. The Carolina mustard could be said to detract from the experience. 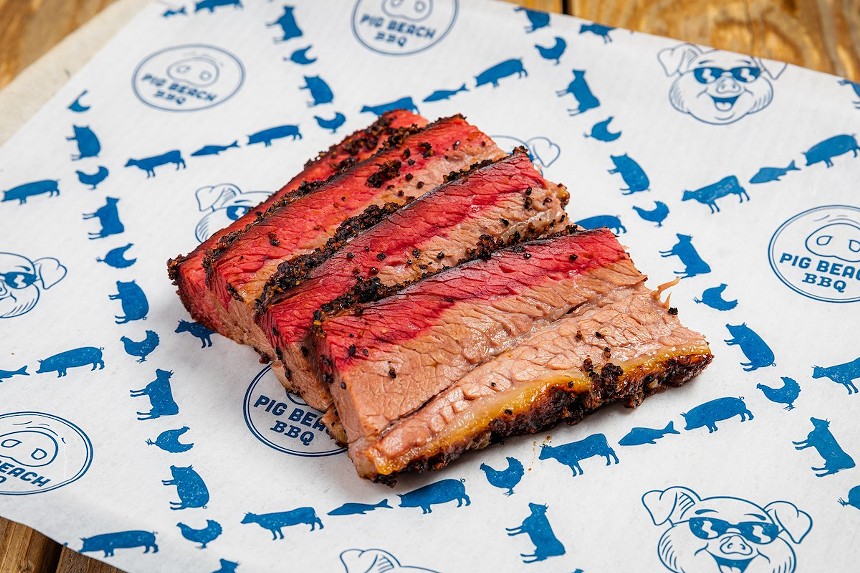 The 15-hour brisket from Pig Beach BBQ in West Palm Beach
Photo courtesy of Pig Beach BBQ
The ribs go in the same way but are smoked exclusively on cherrywood. Halfway through, a glaze is slapped across both sides for a two-hour cook, while an apple cider vinegar and water spritz is misted onto each slab every 15 minutes, infusing smoky flavor along the way.

A platter of brisket begins as a marbled cut that's lightly trimmed to remove the wedge of fat between the point and the flap. The top fat cap remains, basting as it cooks low and slow for 15 hours. A smear of yellow mustard acts as the glue for the salt and pepper, producing that crisp cake that locks in moisture.

It emerges only to be wrapped in butcher paper before it goes back to the smoker, where it rests for up to two hours. It's the most important step, shares Abdoo, rendering a red-rimmed brisket that is equal parts crust, fat, juice, and meat for the perfect bite.

For Shawger, it's all these dishes and more that make Pig Beach the perfect way to spend your day. Indulge in some really good grub; day drink with a potent cocktail or two; or watch a game with a cold beer and a burger, he says. In this space, you can easily do one — or all three — almost any day of the week.

“This area really lacked what our concept is all about — a barbecue restaurant-meets-sports-bar-meets-hang-out spot,” sums up Shawger. "We're excited to finally be here."

Pig Beach BBQ. 2400 S. Dixie Hwy., West Palm Beach; 561-803-0333; pigbeachnyc.com.
KEEP NEW TIMES BROWARD-PALM BEACH FREE... Since we started New Times Broward-Palm Beach, it has been defined as the free, independent voice of South Florida, and we'd like to keep it that way. With local media under siege, it's more important than ever for us to rally support behind funding our local journalism. You can help by participating in our "I Support" program, allowing us to keep offering readers access to our incisive coverage of local news, food and culture with no paywalls.
Make a one-time donation today for as little as $1.