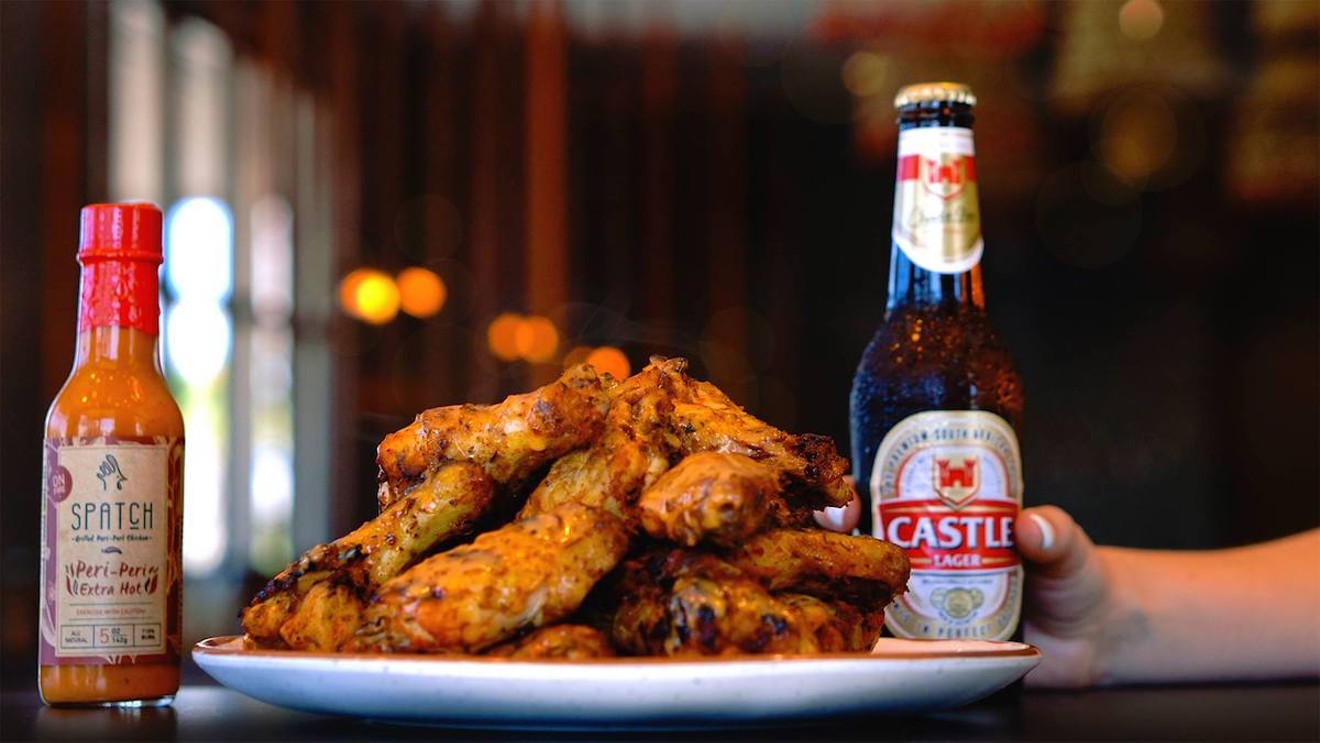 Courtesy of Spatch
Football season is upon us once again,  and nothing screams "sports" quite like chicken wings. (OK, and beer.) Like any food with a cult following of diehard fans, there are many different ideas about where the chicken wing might have originated.

Some say they are the creation of Anchor Bar in Buffalo, New York, where owners Frank and Teressa Bellissimo were the first to deep fry frozen chicken wings, then toss them in a cayenne hot sauce before serving. Another claim suggests a man named John Young served breaded chicken wings in his special "mambo sauce" at his Buffalo restaurant, John Young's Wings n' Things, in the mid-'60s.

Whether they're breaded and fried, tossed in fat-laden sauce, or fired in a coal oven, eating chicken wings is the best way to watch the game. Here are our picks for the best wings in South Florida.

Courtesy of Wings Plus
1. Wings Plus. Many go by this name, but there's only one original. If you've been doing something for 30 years, chances are you're pretty good at it by now. Wings Plus in Fort Lauderdale has been since 1984, and it remains one of the best restaurants in Broward County for good chicken wings to this day. The family-owned spot only purchases the best fresh wings (fresh, never frozen) and fries them in a health-conscious blend of corn and canola oil. It's about as healthy as deep-frying can get. Although the staff here already prides itself on the base, the icing on the cake is the sauce. They offer standard variations of mild, medium, and hot, as well as special flavors like Thai chili, habanero hot, and hibachi. 87 W. Prospect Rd., Fort Lauderdale; 954-771-9877; wingsplusfortlauderdale.com. 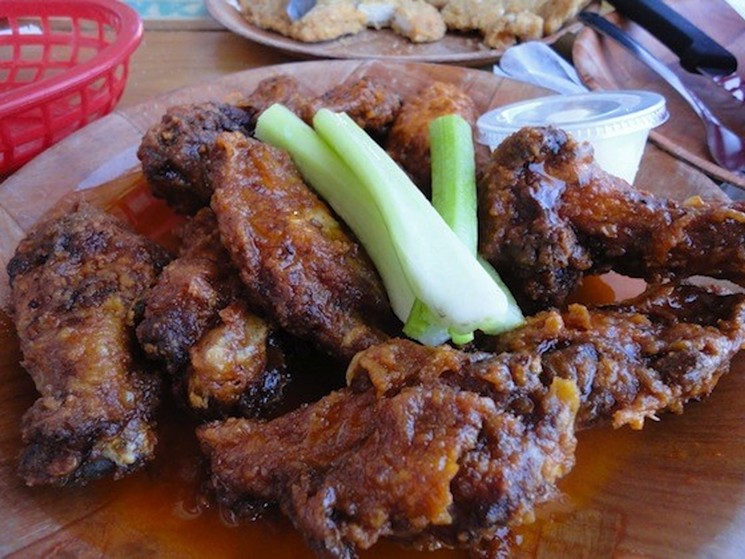 Courtesy of Tarks of Dania Beach
2. Tarks of Dania Beach. When it comes to serving the best of the best, longevity is key. This Dania Beach institution has been shucking seafood and frying wings for close to half a century. Meaty drums and flats can be ordered to whatever level of spice you can handle; "Terminator" will have you breaking into sweats. While you can't go wrong with the classic sauces, the garlic is where it's at. These crisp little morsels come coated in little specs of pungent cloves and a glistening glaze of sauce. No, you won't be sweating with these by the time you leave — but you'll probably smell kind of fresh. 1317 S. Federal Hwy., Dania Beach; 954-925-8275. 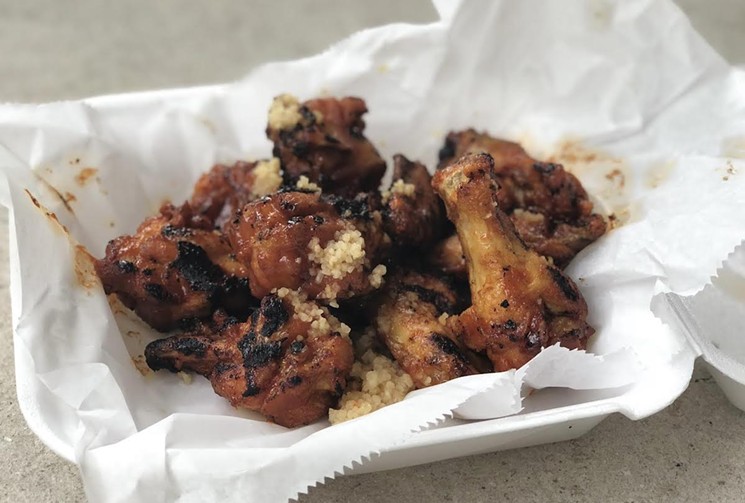 Courtesy of Bru's Room
3. Bru's Room. Despite multiple locations and a "chain" restaurant status, there's no denying: Bru's Room wings are pretty much as close to chicken wing nirvana as you're going to get in South Florida. Offered in a variety of flavors, these award-winning chicken legs get the accolades for a reason, they're impeccably fried and sauced to perfection. You can't go wrong with any selection, but we suggest simply grilled wings topped with fresh minced garlic for those who like to keep it simple. Of course, the hard-core wing eaters only say "yes" to the "triple threat," a heavenly combination of their three most popular sauces — barbecue, sweet 'n' tangy, and standard hot sauce — smothered over wings that are fried, grilled, then finished with a garnishing of that fresh-minced garlic. Multiple locations; brusroom.com.
click to enlarge 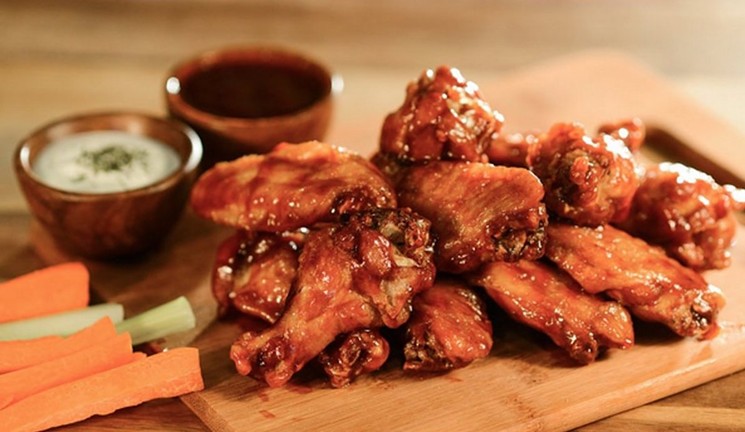 Courtesy of Wings N Things
4. Wings n' Things. One of South Florida's most beloved wing joints, this Pompano Beach establishment has the ultimate local following. A true dive, it's not garnering fans for its outward appearance; it just makes a damned good chicken wing, and that's what it's all about. Owner Eddie Hauck is a Buffalo native, and he's serious about his sauce. He doesn't use the same old hot sauce and butter blend you'll find at most South Florida spots. His is a unique blend of ingredients about as close as you can get to the real deal from the city of Buffalo itself — and you don't have to experience a polar vortex to try it out. Multiple locations. wingsnthingspompano.com. 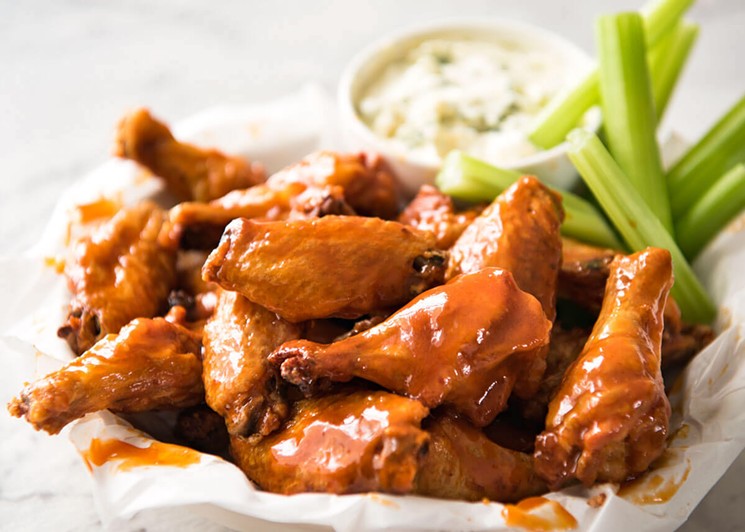 Courtesy of Thirsty Turtle
5. Thirsty Turtle Seagrill. After a long day at the beach, there's no better place to stop than this casual, neighborhood-type spot in a strip mall just steps from the sand and surf. Known for their seafood and sports bar-like atmosphere, the wings just so happen to be some of the best in the county. Here, you get them one way: well done. And there's only one type of sauce — a delectable house blend of honey, butter, garlic, and spices — but you can order them in hot, medium, and mild, depending on personal preference. So grab a seat indoors or out, shoot a few rounds of pool, pound back a few beers, and have some finger-licking good wings while you're at it. 13981 U.S. Hwy. 1, Juno Beach; 561-627-8991; thirstyturtlefl.com. 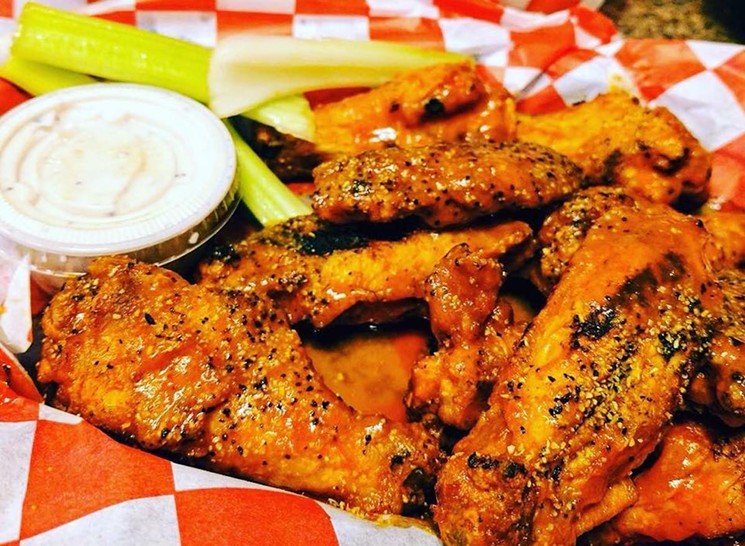 Courtesy of Wilton Wings
6. Wilton Wings. With two locations — the original Fort Lauderdale and a second Wicked Wings in Plantation — Wilton Wings has been doing chicken wings right since 2007. The restaurant specializes in offering some pretty amazing sauces and dry rubs — the perfect start to perfect wings. Flavors include Old Bay, Jamaican jerk, raspberry, and Suicide. You can also get good, old-fashioned butter-based medium or hot Buffalo-style wings. Or go for the Alex Passakos-style: lemon pepper wings prepared, grilled, and served extra wet with minced garlic. Orders range from six to 100 pieces, and each one comes with the traditional side of celery and a homemade blue cheese dressing (they even sell it in jars to take home) for your dunking needs. The restaurant also offers craft beer on tap alongside a fully-stocked bar. 1428 NE Fourth Ave., Fort Lauderdale; 954-462-9696; wiltonwings.co. 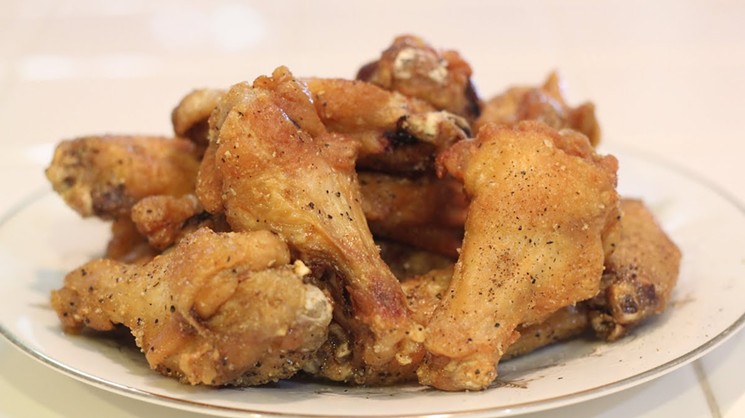 Courtesy of Uncle Al's
7. Uncle Al's. Great food. Good times. That's the slogan at this Davie sports bar, where families have been ordering up some of the best bar-style barbecue, seafood, hamburgers, and, of course, chicken wings for over 30 years. Since 1979, the restaurant has been offering its famous breaded chicken wings (they do non-breaded, too) available in 10 or 20 pieces and smothered in house sauces including chipotle garlic, lemon-pepper, and teriyaki. Pair a platter with a 60-ounce bucket of beer and follow it up with a game of pool, and this will be your new Monday night football spot. 8200 Griffin Rd., Davie; 954-434-1630; unclealsdavie.com.
click to enlarge 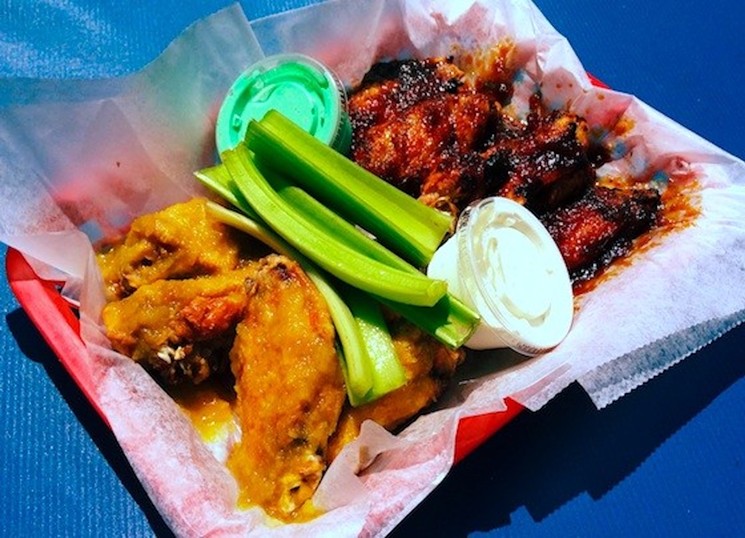 Photo by Nicole Danna
8. Tree's Wings & Ribs. How much do you like Buffalo wings? Like, could you ever see yourself ordering 5,000 at one time? If you can, Tree's Wings and Ribs can do that for about $4,399. With locations in Lake Worth and Royal Palm Beach, Tree's is the place you call when you're craving chicken wings and don't want to move from your couch. Fried up fresh to order, be sure to get them extra wet and extra well-done, with sauces like garlic, cajun, teriyaki, barbecue, honey dip, and traditional Buffalo sauce. We love the lemon pepper, a specialty for which they are well known. Aside from the wings, their special house dressing for dipping is a must-have. It's a spice-flecked, light green-tinged blue cheese dressing that can't be beaten. Of course, you probably won't be ordering them in the thousands, but that's your call. 603 Royal Palm Beach Blvd., Royal Palm Beach; 561-791-1535; treeswingsandribs.com.
click to enlarge 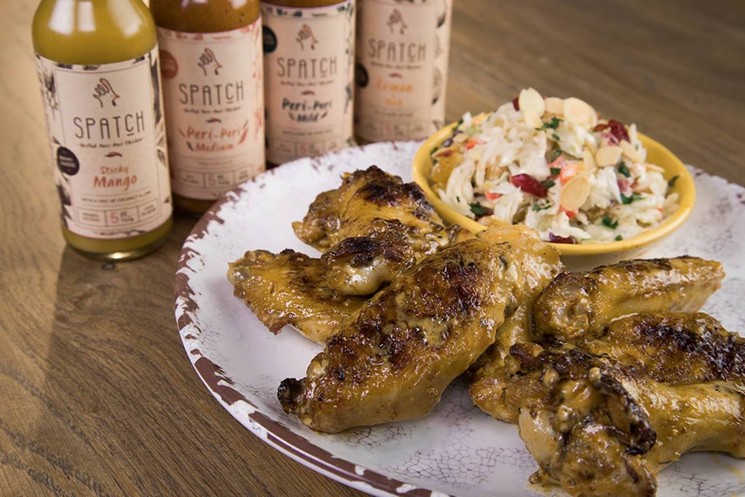 Courtesy of Spatch
9. Spatch Peri-Peri Chicken. At Spatch Peri-Peri Chicken in Fort Lauderdale, the chicken wings are some of the best around. It starts with meat that's guaranteed hormone-, steroid-, and antibiotic-free and never frozen. From there, each wing is marinated in the restaurant's own "secret" peri peri sauce before being grilled (not fried). Customers can then choose to top their wings with a choice of Spatch's five house sauces: Peri Peri mild, Peri Peri medium, Peri Peri hot, Lemon & Herb, or Sticky Mango. The Spatch menu also includes a wide variety of salads, sandwiches, and bowls, in addition to vegetarian and family-style side options, so there's something here for everyone, even the peckiest of all tastes. 3848 N Federal Hwy., Fort Lauderdale; 954-607-1703; spatchperiperi.com. 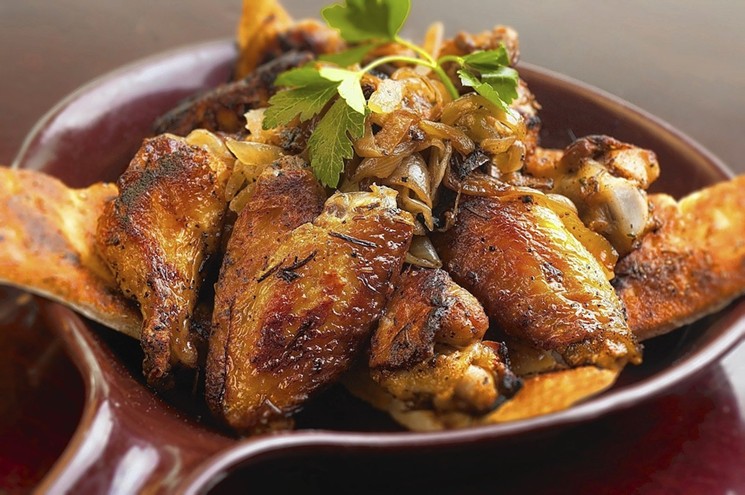 Courtesy of Anthony's Coal Fired Pizza
10. Anthony's Coal Fired Pizza. Not all wings are created, cooked, or served in an equal manner. Sometimes, departing from the traditional frying method is all it takes to make your wings stand out from the flock. Which brings us to Anthony's Coal Fired Pizza, because what's better than coal-fired pizza? Well, coal-oven-roasted chicken wings, of course. The conventional wisdom is that wings are supposed to be deep fried and soaked in grease. Fortunately, for the health-conscious, Anthony's has shown the South Florida wing world what's up. They're a signature menu item at each of the chain's South Florida locations, where every order is served with a heaping topping of caramelized onions and a side of fresh-baked focaccia bread for a dish that's as flavorful as it is salubrious. Multiple locations; acfp.com.
KEEP NEW TIMES BROWARD-PALM BEACH FREE... Since we started New Times Broward-Palm Beach, it has been defined as the free, independent voice of South Florida, and we'd like to keep it that way. With local media under siege, it's more important than ever for us to rally support behind funding our local journalism. You can help by participating in our "I Support" program, allowing us to keep offering readers access to our incisive coverage of local news, food and culture with no paywalls.
Make a one-time donation today for as little as $1.