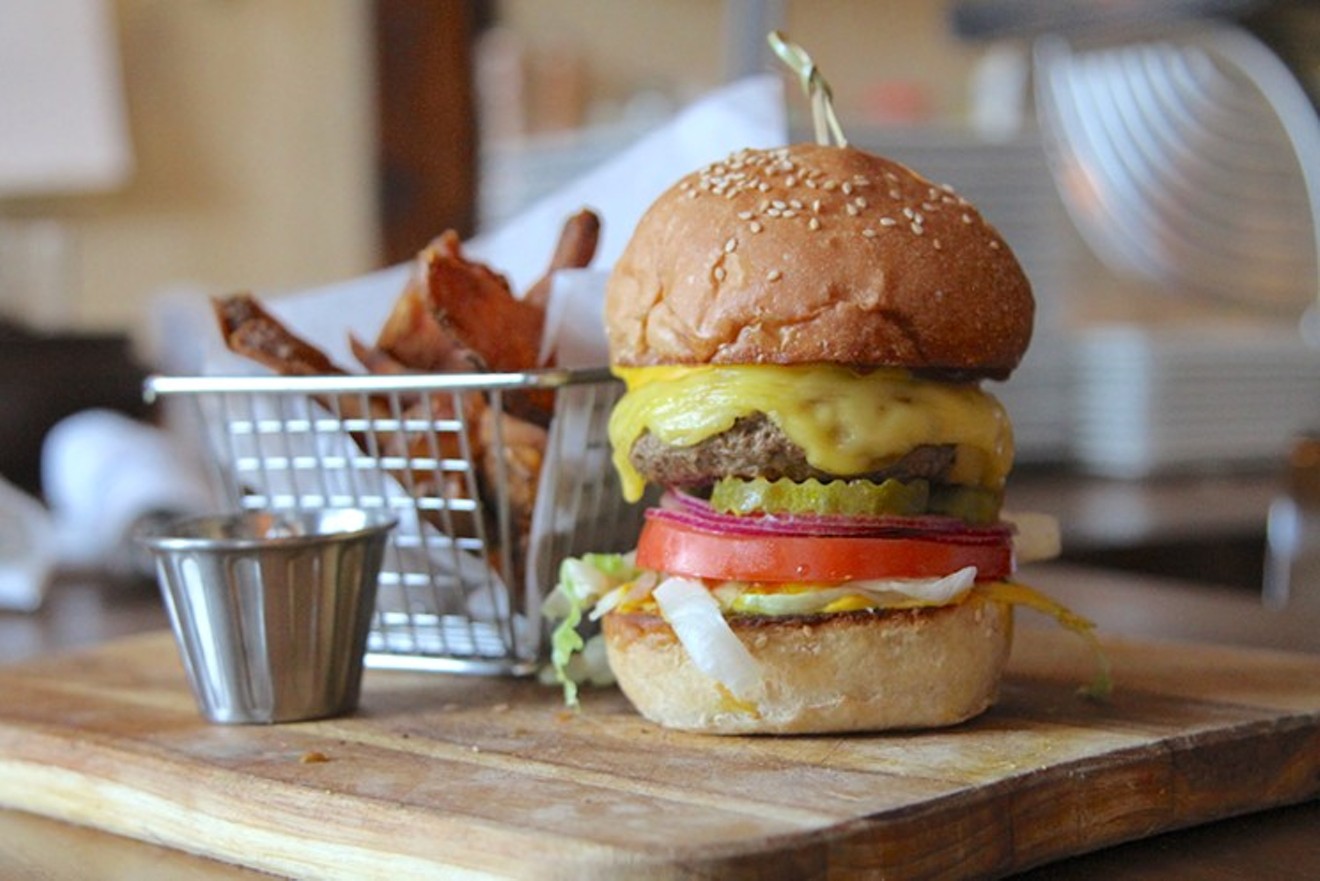 Sweetwater's Impossible Burger Photo by Nicole Danna
The burger: It's so American it's practically the most patriotic food.

What was once an amalgamation of the most undesirable cuts of beef slopped into a cheap, easy-to-eat package is now one of the most popular menu items in the United States. Burgers take center stage at backyard barbecues, they've become a centerpiece of the fast-food industry, and can be customized in so many ways they often occupy a category of their own on any restaurant menu.

In South Florida, burger aficionados have plenty of choices, from fancy foie-gras-infused takes to a seafood version made with an octopus patty. 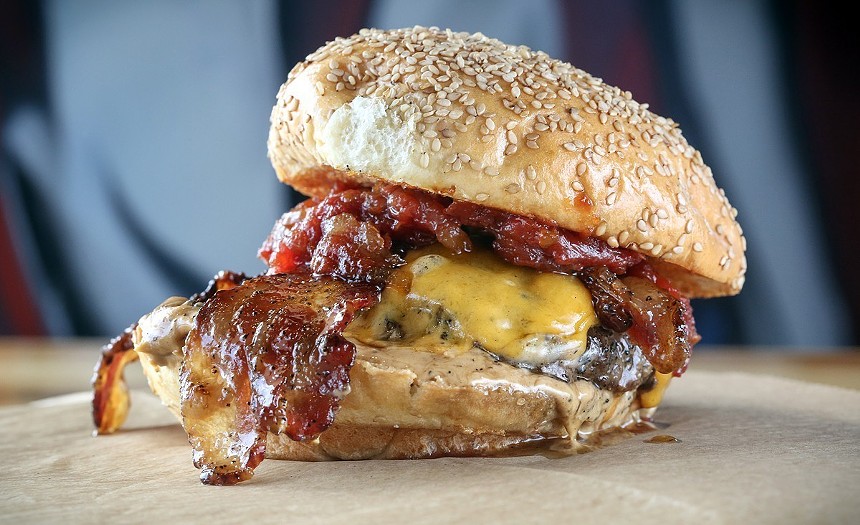 1930 E. Sunrise Blvd., Fort Lauderdale
954-533-8621
brgrstop.com
Almost everything on the Brgr Stop menu is like a challenge straight out of Man vs. Food. Some are options you'd find at the fair; others are foods you'd eat on a dare or maybe when you have a bad case of the munchies. In a world of food trends driven by healthy eating, special meal plans, and dietary restrictions, Brgr Stop goes the opposite direction. Here, everything is "extra." The 18 burgers on the menu are enough to satisfy nearly any craving. And the Mac Daddy is no exception ($14.95). It's crafted with a heaping portion of jalapeño-cheddar-sausage-flecked mac 'n' cheese, long strips of house-made candied bacon, and a barbecue sauce made with root beer and sriracha. 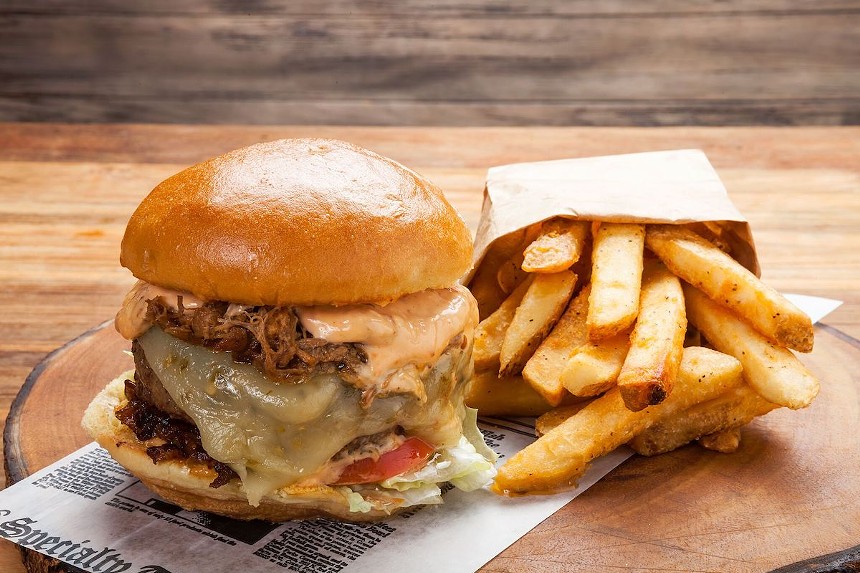 1 N. Fort Lauderdale Beach Blvd., Fort Lauderdale
954-302-6460
ritzcarlton.com
Burlock Coast, the chic seaside eatery inside the Ritz-Carlton Fort Lauderdale, has an unbeatable burger deal each week. Every Monday from 5 to 10 p.m., get a burger paired with a draft beer for $10. Of course, this isn't just any burger; it's the restaurant's Bootleg Burger — ground brisket topped with pulled pork, chipotle aioli, and jack cheese. 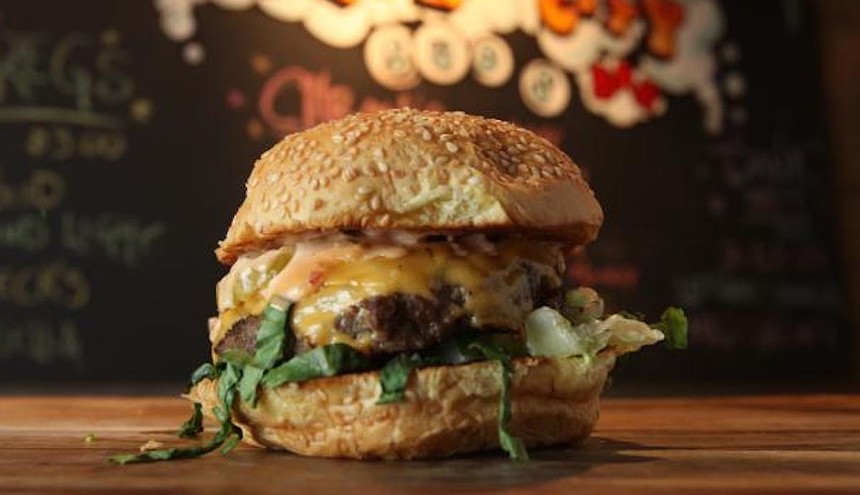 1136 E. Hillsboro Blvd., Deerfield Beach
954-531-0300
charmcityburgers.com
Not many people know the original Charm City was conceived as a sandwich shop — a takeout type of place where you could grab a beer and some quick-go grub at a good price. But when the line began backing up with burger orders, the owner-and-chef team of Evan David and Mike Saperstein gave the menu a quick overhaul and turned the place into one of South Florida’s favorite burger havens. The two even launched their own meat purveyor, Sunshine Provisions, allowing them to develop a custom patty blend. They crank out a daily grind of brisket, chuck, short rib, and — a recent addition — hanger steak and use an old-fashioned burger-cutting machine for a juicier patty. Sure, these sometimes-six-inch-tall burgers can be a little hard to handle, but as messy as they get, they're worth the extra napkins. That goes for the restaurant's cowboy burger too ($6.95). The signature steak patty is topped with thick-cut bacon, aged cheddar, sautéed mushrooms, and grilled onions. 1821 Cordova Rd., Fort Lauderdale
954-768-8990
gilberts17thstgrill.com
Gilbert's, which sits on the corner of the Harbor Shops in Fort Lauderdale, is all about burgers. More than a dozen options are listed, and over a decade's worth of satisfied patrons' reviews extolling these burgers' virtues means they're consistently delicious. The inch-thick Angus-certified beef patties are chargrilled to order and served with crisp, grease-free fries. Try the house favorite, the Brie, topped with Brie cheese, crisp fried onions, and bacon ($14.95).

319 Belvedere Rd., West Palm Beach
561-249-2281
kitchenpb.com
Chef/owner Matthew Byrne's eponymous Kitchen burger doesn’t mess around ($20). Just as he does with the rest of the menu at this cozy American bistro, Byrne is able to elevate a classic with his luxe take on a traditional favorite using his blend of grass-fed chuck, brisket, short rib, and — for the finishing touch — foie gras. To keep the meat center stage, the burger is topped with the perfect flavor accompaniments: a thin veil of melted American cheese and sweet chargrilled onions.

321 N. Fort Lauderdale Beach Blvd., Fort Lauderdale
954-245-3069
lonarestaurant.com
If you're tired of basic burgers, switch things up with a Mexican-inspired seafood version at Lona, located in the Westin Fort Lauderdale Beach Resort. Executive chef Pablo Salas has created something truly unique: an octopus burger ($12). Slow-cooked octopus is shredded, shaped into a patty, and then topped with caramelized onions and chipotle aioli for a marine take on the all-American classic.

528 NE Second Ave., Delray Beach
561-404-5301
thenewvegan.com
The New Vegan in Delray Beach has long been a go-to spot for dairy-, and meat-free fare. Husband-and-wife team Rahein and Patricia Jones recently opened an outpost in West Palm Beach's Northwood enclave to satisfy hungry patrons farther north. Several of the burgers highlight ingredients such as beets, mushrooms, and kale, but the restaurant is best known for the couple's proprietary Super Burger mix, a chickpea-based falafel patty ($16). The recipe is simple: Dehydrated garbanzo and fava beans are flavored with fajita seasoning and garlic before the blend is shaped into a mouthwatering meatless patty. 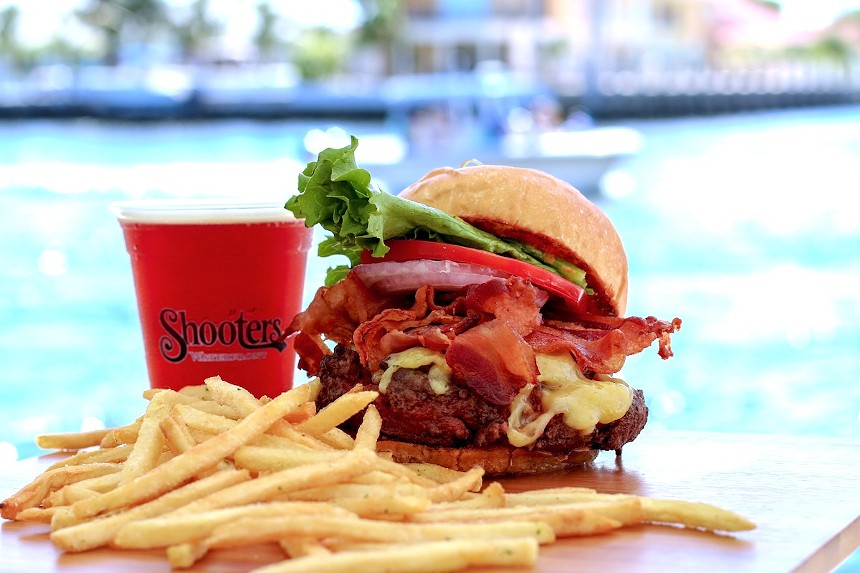 3033 NE 32nd Ave., Fort Lauderdale
954-566-2855
shooterswaterfront.com
For a burger with a view, head to Shooters Waterfront. This longtime South Florida spot estimates the kitchen uses about 7,000 pounds of ground beef — used just for burgers — every year. And the signature cheeseburger ($17), served with a side of shoestring fries, remains a favorite among guests. Served on a brioche bun, the patty is topped with cheddar cheese, lettuce, tomato, onion, the restaurant's signature sauce, which the chef says took 21 days to perfect. 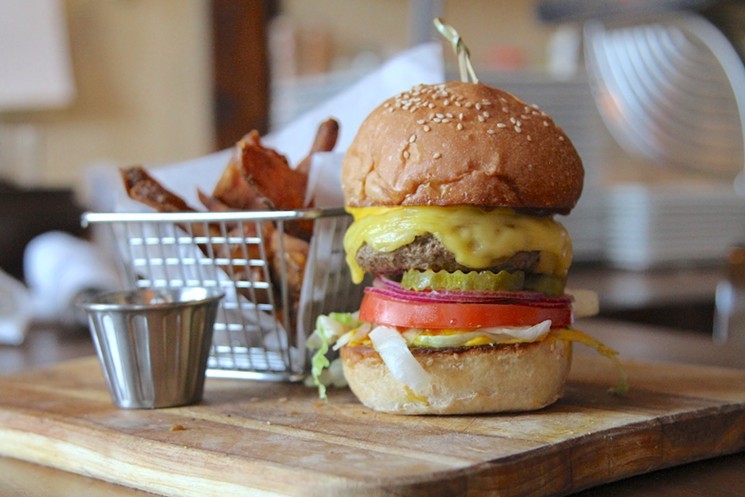 507 S. Federal Hwy., Boynton Beach
561-509-9277
sweetwater33.com
Most people head to Sweetwater for imbibing. But there's more to Palm Beach County's first craft cocktail bar than its stellar bar staff and booze. If you're a vegetarian or vegan hankering for something that conjures memories of the time you savored the flavor of flame-grilled meat, you'll want to check out the restaurant's Impossible Burger ($17). Executive chef Jeremy Carrier's take on this meatless masterpiece is prepared like a traditional cheeseburger. A medium-rare Impossible Burger patty is topped with lettuce, tomato, and onion. To keep it vegan-friendly, it's nestled in a custom-made egg-free bun from the Boynton Beach-based bakery Del Sol before it's smothered in Chao cheese. 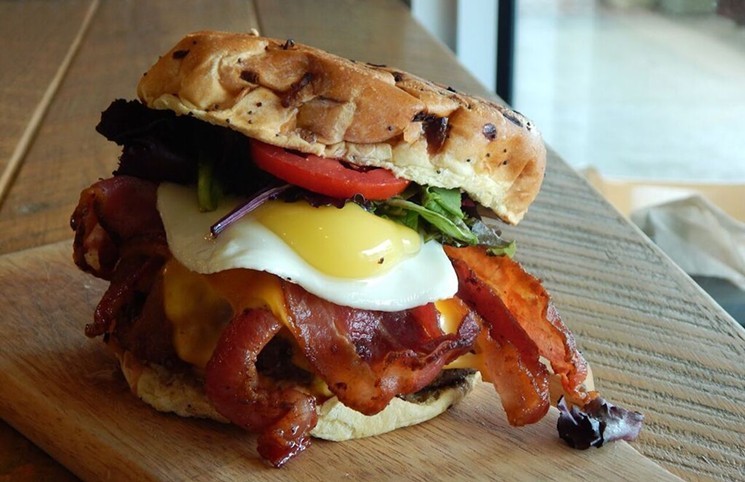 1101 S. Powerline Rd., Deerfield Beach
954-708-2035
tuckerdukes.com
Disgusted with the never-ending line at the McDonald's drive-thru near his original Niceville, Florida location, Tucker Duke's founder, Brian Cartenuto, decided to put a burger on his menu. Known simply as the Tucker Duke, it's his bigger and better interpretation of the Big Mac: a half-pound of custom-blended beef topped with fried onion rings, melted American cheese, mixed baby greens, celery-salted tomato, and Pink Tucker sauce — Cartenuto's version of Cajun rémoulade — on a toasted onion-encrusted bun ($13). While this is the crowd favorite, try the Mondragon for a feast-worthy feat: a burger patty topped with six slices of bacon, a fried egg, and two slices each of American and cheddar cheese ($15).
KEEP NEW TIMES BROWARD-PALM BEACH FREE... Since we started New Times Broward-Palm Beach, it has been defined as the free, independent voice of South Florida, and we'd like to keep it that way. With local media under siege, it's more important than ever for us to rally support behind funding our local journalism. You can help by participating in our "I Support" program, allowing us to keep offering readers access to our incisive coverage of local news, food and culture with no paywalls.
Make a one-time donation today for as little as $1.