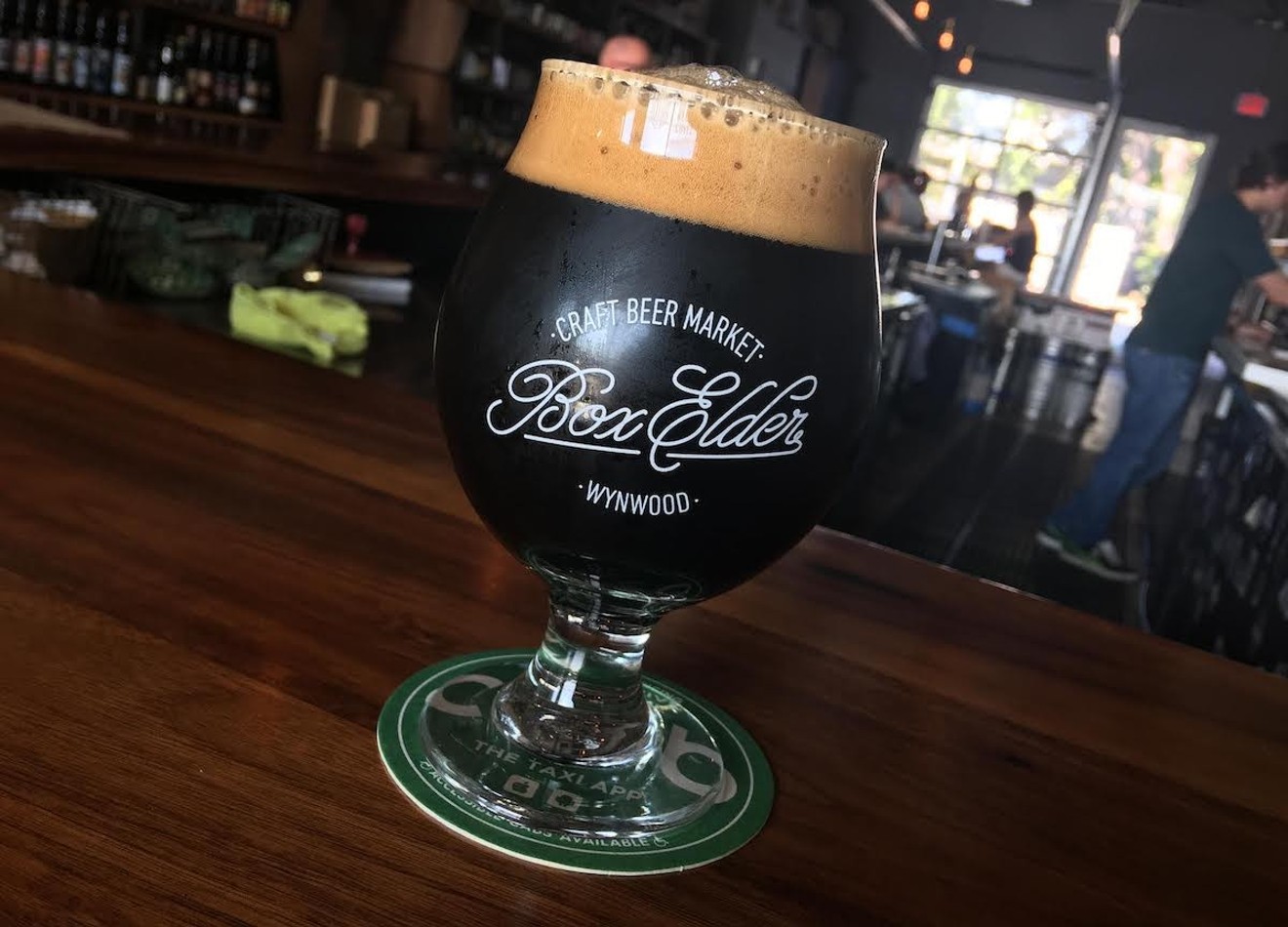 Tap 42
Courtesy of Tap 42
6. Tap 42
301 Giralda Ave., Coral Gables; 954-463-4900; tap42.com and other locations.
When Tap 42 opened in Fort Lauderdale a few years back, it quickly became a sensation for what gave the restaurant its name: a wall featuring 42 taps of rotating craft beers. The brewpub also offers 42 Truths, a special Funky Buddha pale ale prepared just for them. The beer menu is broken down into sections like sociable and easy ales; IPAs; nutty, malty, and ; Belgian-inspired ales; and wheats, sweets, and hefeweizens (most beers $7-$10). Still undecided? Order a flight of any three drafts for $15. Look for Tap 42 to open in Midtown Miami in the coming weeks. Photo courtesy of To Victory! Craft Beer Bar
7. To Victory! Craft Beer Bar
8652 Griffin Rd., Cooper City; 754-301-2121; tovictorycraftbeerbar.com.
Cheers to a good cause at this Cooper City craft beer bar, where U.S. Navy veterans and best friends Robert "Sid" and "Amp" Ampalayo made their mission to bring victory to their local friends and family a self-made success. Having witnessed the hardships of their fellow veteran brothers and sisters adjusting to civilian life following active deployment, the pair launched the To Victory! bar to support and advocate for veterans via charity events and fundraisers, while also serving to increase local veteran awareness. Of course, that's not all they do. The duo also just happens to serve some really good craft food and beer here, too. Order the Recruit's Plate and get a sampler of their most popular appetizers including the house avocado hummus, meatballs, and waffle-pressed tater tots topped with cheese, bacon bits, and sour cream. To quench your thirst, the bar offers 24 craft brews on draft and another 25 to 30 in can or bottle. End your visit with the menu's only dessert option, the beer milkshake, a stout or porter topped with vanilla ice cream, whipped cream, and chocolate syrup ($8.99).

Photo by Candace West
8. The Mack House
9118 W. State Rd. 84, Davie; 954-474-5040; themackhouse.com.
Way out in Davie, Mack House is a bastion for those in need of craft beer. It would be easy to pass by this 4-year-old beer bar and brewpub if you didn't know where to go — but you're reading this, so you do. Walk through the dark-tinted door and you'll be greeted by a friendly staff including head bartender Stevie Dice, and often including father and son co-owners Larry and Kyle Hatfield. Belly up to the bar and you'll see the draft and bottle/can selection is written on a chalkboard, an easy way to add or remove selections as they come and go. Mack House offers 12 taps pouring a solid lineup of craft brews, several which are dedicated to beer brewed in-house. These small-batch, one-of-a-kind beers are crafted by Kyle himself using his recently upgraded three-barrel system. Only available at Mack House, they include his most well-known recipes like the House Hefe, 954 IPA, Flamingo Blonde, and Harwick's Ale (a Belgian-style ale brewed in honor of the duo's first customer, the late Joe Harwick). Unlike most craft beer bars, this is not a place where you have to go without food: A limited bar menu offers signature, house-made items like the mango pineapple salsa and pretzels with IPA-infused beer cheese. But ask for the Brie and Bleu, a grilled cheese sandwich with bacon, scallion, cranberries, and a mix of bleu and brie cheese.

Photo courtesy of The Abbey Brewing Company
9. Abbey Brewing Company
1117 16th St., Miami Beach; 305-336-7276; abbeybrewinginc.com.
Since 1995, the Abbey Brewing Company has been one of Miami Beach's best (and first) craft beer spots. When it opened, most believed the concept was doomed to failure, but not so. Instead, the quaint bar off 16th Street has thrived, going through a small, relatively recent expansion that allowed for more people to squeeze into the tiny spot. Today, founder and brewmaster Raymond Rigazio and head brewer Jose Ayala offer up a number of in-house brews on draft including the Abbey's own Immaculate IPA, Father Theodore’s Stout, Brother Dans Double, and Brother Aaron’s quadruple. In addition to the four house beers, customers can select from a total of ten guest taps that serve everything from rare Belgian specialty brews and to limited-release American micros. These days, most know the Abbey for its unique bottle selection with a focus on hard-to-find Trappist ales and British barleywines. More recently, the Abbey also began offering a curated selection of craft spirits, cigars, and port wines.

Tenth Level Tavern
10. Tenth Level Tavern
1242 NE 38th St., Oakland Park; 954-559-1414; facebook.com/tenthleveltavern.
There are plenty of people who drink beer and play video games at home, but if you've ever wanted to do it in public with all your friends, and maybe the chance to make some new ones, look no further than Tenth Level Tavern in Oakland Park. Sure, this Broward bar-cade is just a hop, skip, and a jump from Funky Buddha Brewery's taproom, but they have one thing the Funky Buddha doesn't: tons of video games. This gamer’s paradise has dozens of screens and TVs for your playing pleasure, many of them stationed right on the bar. Others line the back wall, while still more allow you to sit down in large armchairs, just in case you plan to stay awhile. And you can, since playing is 100 percent on the house, everything from the original classic arcade games and older classic console games like Atari and Nintendo to newer models such as PlayStation 4 and Xbox. If all that gaming makes you thirsty, expect to find hundreds of different beers, offering a lineup from local and national breweries both on tap and by the bottle/can.

previous
KEEP NEW TIMES BROWARD-PALM BEACH FREE... Since we started New Times Broward-Palm Beach, it has been defined as the free, independent voice of South Florida, and we'd like to keep it that way. With local media under siege, it's more important than ever for us to rally support behind funding our local journalism. You can help by participating in our "I Support" program, allowing us to keep offering readers access to our incisive coverage of local news, food and culture with no paywalls.
Make a one-time donation today for as little as $1.