Funky Buddha Brewery has a kitchen inside its Oakland Park production brewery. Photo courtesy of Funky Buddha Brewery
Food and craft beer in South Florida is not a new combination. Brewpubs like Big Bear in Coral Springs and Hollywood Brewing on the city's boardwalk have long served food alongside their suds. The slew of breweries to open in the past several years, however, have largely relied on food trucks for fare.

Today, a number of full-service breweries are offering a broad menu of eats along with their craft beers — and many are equipped with a full kitchen.

From the Guy Fieri-approved pairing menu at 3 Sons Brewing in Dania Beach to the Thai-inspired eats at Est. 33 Thai Craft Kitchen and Brewery in Brickell, there's plenty to explore when it comes to dining and drinking your way through the breweries of South Florida. 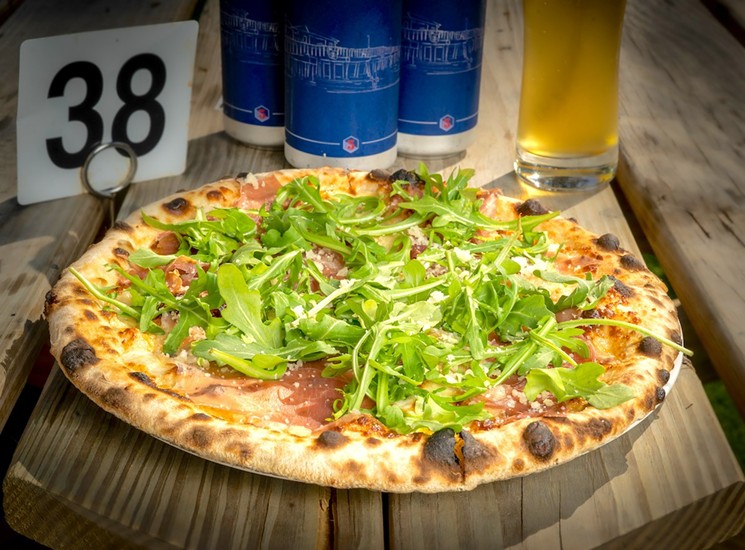 The menu at 3 Sons Brewing Co. in Dania Beach has been featured on Diners, Drive-Ins and Dives.
Photo by Magic Muncie

236 N. Federal Hwy., Ste. 104, Dania Beach
954-601-3833
3sonsbrewingco.com
Chewy Neapolitan-style pizzas. Dashi butter chicken wings. Yellowfin ahi tuna tacos. Artisan-inspired charcuterie and cheese boards. Even a duck báhn-mì. That's just a handful of the dishes you’ll find at 3 Sons Brewing Co., where brewer/founder Corey Artanis and his business partner, executive chef Nicolay Adinaguev, are as passionate about their food menu as they are about the taproom’s draft offerings. Artanis may be best known for his intensely flavored, barrel-aged imperial stouts, but beer enthusiasts flock to his 1,400-square-foot Broward County taproom and brew house for a taste of a wide variety of beer styles. That means you can find just about anything to pair with a meal on a daily draft lineup that runs the gamut from a lightly hopped, easy-drinking American-style rice lager dubbed "Rice Crispy Bois" to intensely fruited sours. Open daily from noon to 10 p.m. 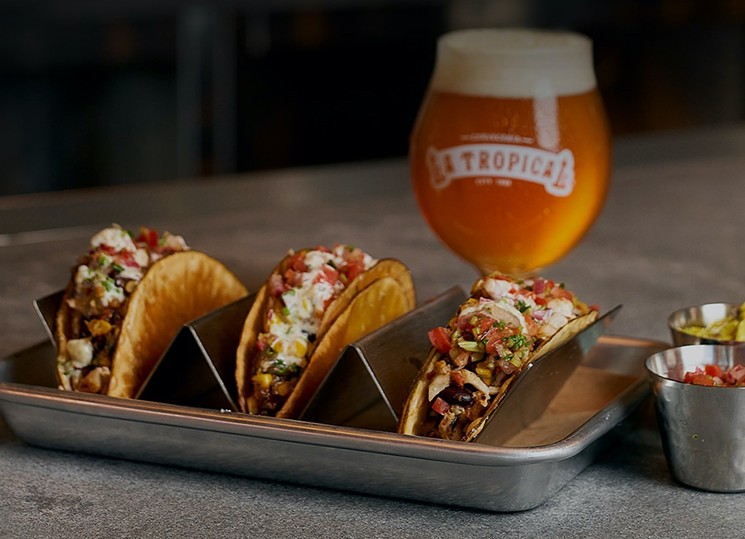 42 NE 25th St., Miami
305-741-6991
cervecerialatropical.com
A recent addition to Miami's lager landscape, Cervecería La Tropical is a custom-built, 28,000-square-foot space that includes a taproom, a restaurant, and an outdoor botanical garden, not to mention a live-music stage. Drawing from a Latin Caribbean palette, Miami chef Cindy Hutson (of the late, lamented Ortanique in Coral Gables), has crafted a menu of small- and medium-size tapas plates, flatbreads, sandwiches, salads, and main courses — from starters like plantain chips served with a chipotle aioli to a "frita cubano" burger topped with chorizo, ground pork, shoestring potatoes, and tomato marmalade on brioche. You'll be grateful for the hearty fare when sampling the brewery's "Tropilina," a high-octane tropical double IPA with hints of citrus, pineapple, guava, and grapefruit. Wash it all down with La Tropical’s signature beer, "La Original," the Vienna-style amber lager whose recipe dates back to 1888. Open Tuesday through Thursday 4 to 11 p.m, Friday 4 to 2 a.m., Saturday noon to 2 a.m, and Sunday noon to 11 p.m.

701 S. Miami Ave., Miami
305-374-7535
est33.us
The name is a homage to the 1933 founding of Est. 33's parent company, the Bangkok-based maker of Singha and Leo beers. If you're thirsty and hungry, Est. 33's menu marries the best of American barbecue — cooked over a barbecue grill and smoker fueled by hickory wood — with various combinations of Thai, Japanese, and Chinese flavors. Appetizers include beef jerky, spicy chicken wings, and Thai fish cakes. Larger plates include lamb chops, pad Thai, lobster curry, and a crispy whole branzino. Open Sunday through Wednesday 11:30 a.m. to 11 p.m., and Thursday through Saturday 11:30 a.m. to midnight. 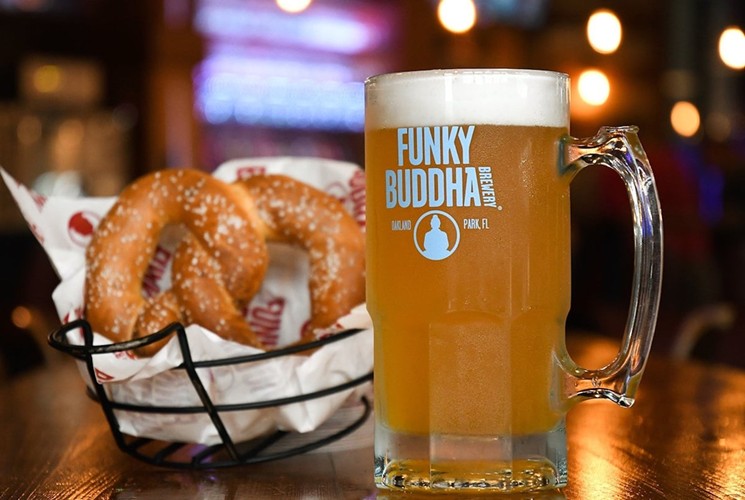 1201 NE 38th St., Oakland Park
954-440-0046
funkybuddhabrewery.com
It's no surprise that Oakland Park-based Funky Buddha Brewery would offer a menu that's the edible equal of its food-forward beers. In 2015, the South Florida brewery launched Craft Food Counter & Kitchen, a fast-casual restaurant inside the production brewery taproom, allowing patrons the option of pairing their brew with from-scratch pub fare. Beer lovers can begin their happy hour with sharable dishes like a giant pretzel made with spent grain from the brew house and served with a spicy, whole-grain brown ale mustard. Other beer-friendly eats range from maple and coffee-candied bacon and chicken wings doused in Buffalo sauce. Still hungry? Larger dishes include a house-made bratwurst braised in Funky Buddha's own "Hop Gun" IPA and served with cabbage kraut and sautéed onions, and the "Brewer's Board," cured meats and cheeses presented with house-pickled seasonal vegetables. Open Monday through Thursday 11:30 a.m. to 10 p.m., Friday and Saturday 11:30 a.m. to 11 p.m., and Sunday 11:30 a.m. to 9 p.m. 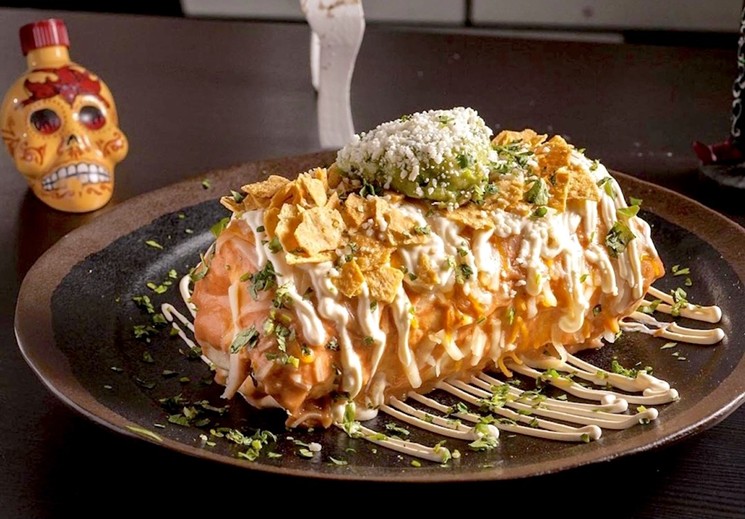 7360 SW 41st St., Miami
305-912-7390
lincolnsbeardbrewing.com
Lincoln's Beard Brewing's on-premises food truck, Tacos and Tattoos, is here to stay. Located on the brewery's back patio, it has gone from pop-up to permanent fixture, an element of owner John Falco's commitment to serving as a community brewpub with a focus on the taproom experience. And that means solid fare to accompany all that craft beer. The menu offers up a variety of Latin-themed eats, from overstuffed burritos and enchiladas to a variety of tacos. Open Monday 4 to 11 p.m., Tuesday and Thursday 4 p.m. to midnight, Wednesday and Friday 4 p.m. to 1 a.m., Saturday noon to 1 a.m., and Sunday noon to 9 p.m. 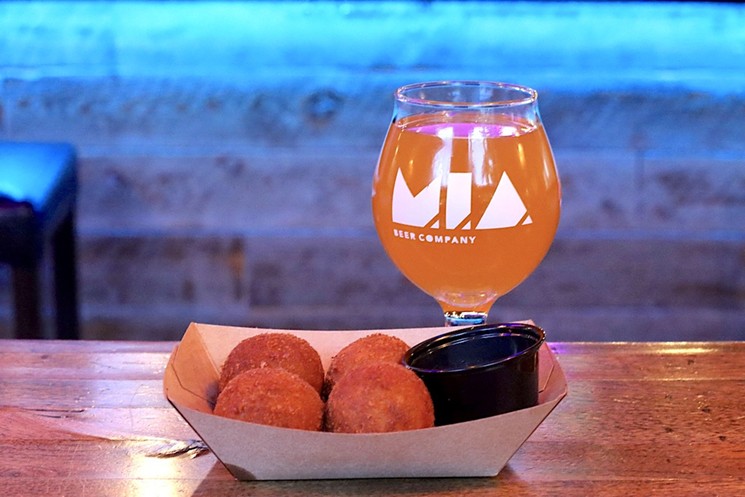 Croquetas and beer at MIA.
Photo by Nicole Danna

10400 NW 33rd St., Ste. 150, Doral
786-801-1721
mia.beer
With 50-plus draft lines, MIA's taproom has everything you can imagine when you think of craft imbibing. Options range from beers, hard cider, and hard seltzer to wine-based liquors, micheladas, and cocktails. If all that imbibing makes you hungry, the onsite kitchen, Masa Handcrafted Croquettes, has you covered. They may be best known as the winners of Burger Beast's 2019 Croqueta Palooza, but the chefs at Masa also prepare a wide range of beer pairing-worthy eats — munchies like Spam fries and smoked-fish dip; chicken, steak, or vegan-inspired nachos; a slew of specialty burgers; and baked or grilled chicken wings. Open Tuesday 4 to 11 p.m., Wednesday and Thursday noon to 11 p.m., Friday and Saturday noon to midnight, and Sunday noon to 9 p.m.

280 SW Sixth St., Fort Lauderdale
954-353-3193
tarponriverbrewing.com
Tarpon River Brewing was one of the first Broward County breweries to offer both food and suds. The 11,000-square-foot Fort Lauderdale brewhouse and taproom was constructed in the early 1920s as the Snyder Stables, which housed the horses that paved the roads that helped urbanize the city. As a result, the brewery taproom offers a distinct, Old Florida design that includes its own 1,000-square-foot "house" within the walls of the brewery — the perfect setting to enjoy the brewery's in-house food and beer. Here, you'll find a wide range of pub-grub favorites, from a "Big Ass" pretzel with beer cheese to Buffalo fried cauliflower to a PB&J Burger to fried fish tacos. Pair your meal with any of the brewery's drafts, like the "Hibiscus Prickly Pear Zinger" sour ale, or an easy-drinking "InZane" light American lager. Open Monday through Wednesday 10:30 a.m. to 10 p.m.; Thursday 11:30 a.m. to 11 p.m., Friday 11:30 a.m. to midnight; Saturday 11 a.m. to midnight; and Sunday 11 a.m. to 10 p.m. 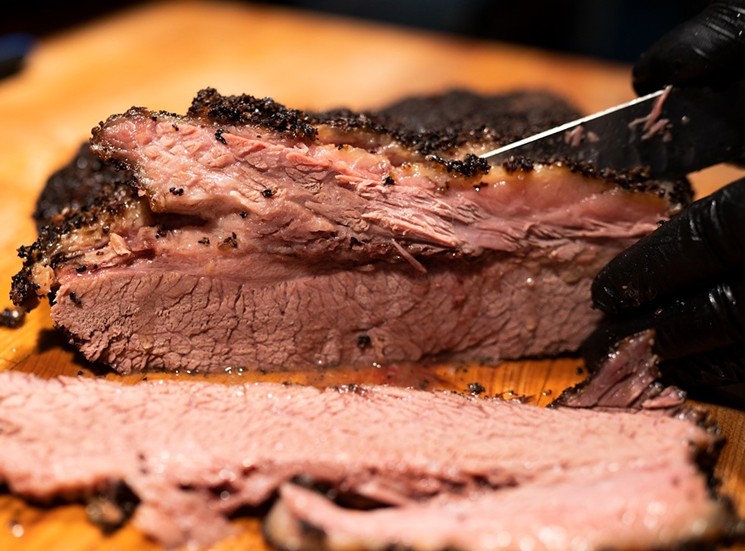 2685 NW 105th Ave., Doral
305-646-1339
trippinganimals.com
Opened in November 2019 as the in-house kitchen at Tripping Animals, Gorilla City Sandwiches offers up the best of barbecue for the taproom's hungry patrons. Chef/owner Julien Uribe takes his experience at a Texas smokehouse to create the menu's Texas-style brisket, served up alongside a number of meats, plus sides like classic cole slaw, traditional potato salad, baked beans, and roasted mushrooms. Order platters of sliced smoked turkey and pulled pork — or get them in sandwich form. Pair your food with Tripping Animals' insanely fruited sour ales or easy-drinking "No Mames" Mexican-style lager. Don't miss the "Brisket Sando," a half-pound of meat stuffed between two slices of toasted Sullivan Street focaccia-style bianca buns with a barbecue and garlic aioli and topped with slaw and crisp fried onions. Open Tuesday through Thursday from 4 to 10 p.m., Friday 4 p.m. to midnight, Saturday noon to midnight, and Sunday from noon to 6 p.m. 55 NW 25th St., Miami
786-362-6300
vezasur.com
Veza Sur’s Wynwood brewery isn't just about the beer. It also offers an array of shareable small plates courtesy of Chi-Fa, the permanent on-site food truck from the creators of SuViche. A fusion of Chinese and Peruvian cuisine, Chi-Fa’s condensed menu was designed by executive chef and partner, Jaime Pesaque, and includes traditional plates that elevate the typical food-truck experience. Guests can experience a variety of dishes, including chicken wings marinated with a spicy beer reduction using Veza Sur’s "Yuma" Amber Lager and served with tahini sauce; and a kale salad topped with pickled onions, queso fresco, and mango vinaigrette. Ranging in price from $4 to $15, the dishes pair perfectly with Veza Sur’s selection of craft beers, including the new "South Coast" IPA, "Mangolandia" American blond ale with mango, and Lulo sour ale with lulo fruit. Open Tuesday through Sunday from noon to midnight. 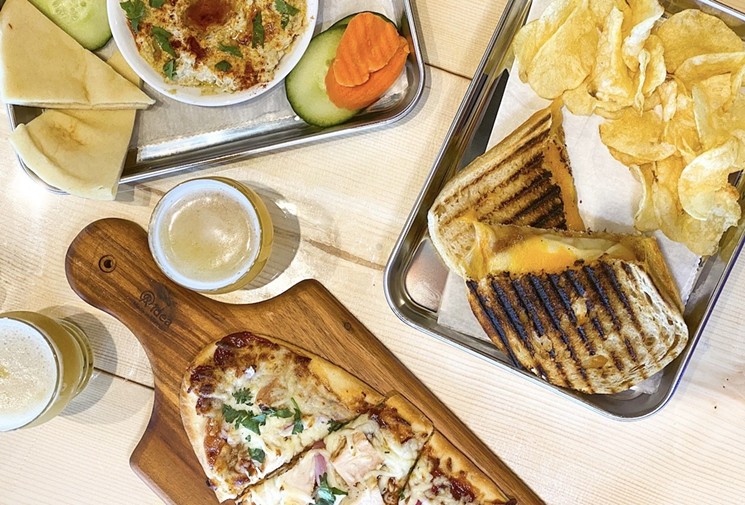 Yeasty Brews in Lauderhill offers a small menu of house-made eats to pair with their brews.
Photo by Marilyn Orozco

3944 NW 19th St., Lauderhill
754-223-2198
yeastybrews.com
Yeasty Brews co-founders and partners Daniel Pfaffenbach and Denielle Mizrahi recently opened their nano-brewery in Lauderhill. The partners' three-barrel system produces a variety of styles. The common thread: Each is brewed to highlight a particular strain of yeast, accented with the addition of fresh, local, tropical fruits. The 3,000-square-foot taproom offers beer-friendly eats including flatbreads, a stellar grilled cheese, panini, and vegan empanadas. They pair nicely with the rotation of draft favorites, including a milkshake-style hefeweizen dubbed "Banana Slinger," the Norwegian-style strawberry imperial blond ale, and a Belgian pale ale infused with local watermelon. Like the beer, all the food is prepared in-house. Open Thursday 3:30 to 10 p.m.; Friday to Sunday 3:30 to 11 p.m.; closed Monday to Wednesday.
KEEP NEW TIMES BROWARD-PALM BEACH FREE... Since we started New Times Broward-Palm Beach, it has been defined as the free, independent voice of South Florida, and we'd like to keep it that way. With local media under siege, it's more important than ever for us to rally support behind funding our local journalism. You can help by participating in our "I Support" program, allowing us to keep offering readers access to our incisive coverage of local news, food and culture with no paywalls.
Make a one-time donation today for as little as $1.