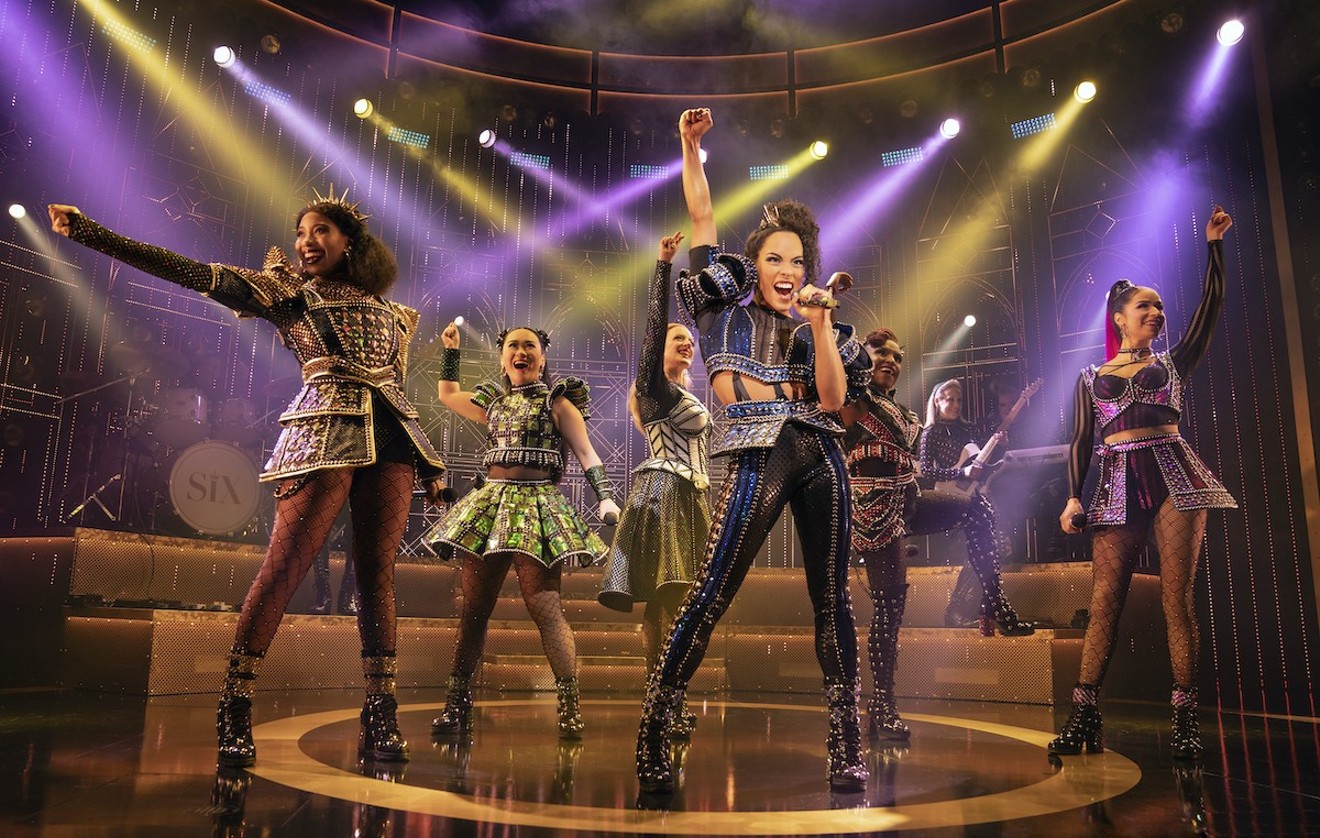 Anna Uzele (center) as Catherine Parr in the Broadway production of Six. Photo by Joan Marcus
The Adrienne Arsht Center for the Performing Arts and the Broward Center for the Performing Arts are making history with the announcement of their 2022-2023 Broadway season lineup. It's the first season both venues won't have mask or testing requirements since the pandemic began — and the first time both will kick off their respective Broadway seasons with the same show.

"In our industry, it was really like losing our voice," Johann Zietsman, the Arsht Center's president and CEO, says of the pandemic's toll on his industry.

The Arsht Center and Broward Center lifted their mask mandates earlier this month, though both venues still require them for certain performances at the request of the artists and touring companies.

"We're seeing people with their smiling face instead of their masked-up face, and we're beginning to have this shared experience of live arts and entertainment again the way that we remember it," says Kelley Shanley, president and CEO of the Broward Center. "That is all making us feel really good about the path forward and really excited to hopefully leave the pandemic mostly in our past."

Broadway seasons, created in partnership with Broadway Across America, a producer and presenter of touring shows in the U.S., and based on ticket-subscriber input, are typically scheduled about two years in advance. For both the Arsht and the Broward Center, the lineup was conceptualized during the early days of the pandemic, when neither could predict how or when another season would transpire.

"It was planned in a bit of a vacuum," Zietsman explains. "We've learned how to be flexible and nimble during this time and, should COVID re-emerge at some point, we know what to do, we know how to handle it, and we know how to keep people safe."

But perhaps more historic is the fact that for the first time, both South Florida venues — which are less than 30 miles apart — are opening with the same show: Six. The show is a pop-music comedy that centers on the six wives of King Henry VIII.

It debuted in the UK in 2017, then moved to the West End in 2019 and was scheduled to open on Broadway on March 12, 2020 — the very day Broadway went dark. It finally had its opening night in October 2021 and since then has received praise from critics at the New York Times and Variety, among others. It's expected to score a nomination for Best Musical at the 2022 Tony Awards in May.

Shanley and Zietsman anticipate it will be the blockbuster of both their seasons.

"I think it would be fair to say that it's the hottest show coming off Broadway onto the road," Shanley says. "I think when there's a show that has this level of interest, it makes sense for both of us to put it on our season, and between the two of us, we kind of share the marketplace. Three weeks of Six in the market still might not be enough to satisfy the demand."

"It's a very upbeat, wonderful way of telling the story of Henry and the six wives," Zietsman adds. "It's a fun show looking at that period of history, but certainly not a historic version of it. It's just a wonderful, exuberant celebration of a modern way we look at female power."

The remainder of the Arsht's season includes fan favorites like Wicked (returning for the fourth time), newer Broadway conceptions like Ain't Too Proud, and the Lincoln Center revival of Golden Age classic My Fair Lady.

"It's usually possible for me to know which one or two are my favorites. But in this upcoming season, I've got to tell you, I'm looking forward to all [five] of them," Zietman says. "It just came together that almost everything we could wish for is in the season."

The Broward Center has the Broadway biography Tina: The Tina Turner Musical, the 11-time Tony Award-winning Hamilton, and the movie-turned-musical Mean Girls.

"It's easy to say there's something here for everybody," Shanley says, "but I think for even an individual, there's such a great variety that you're going to get a little bit of everything through this season."