The Five Best Spots for Book Lovers in Broward 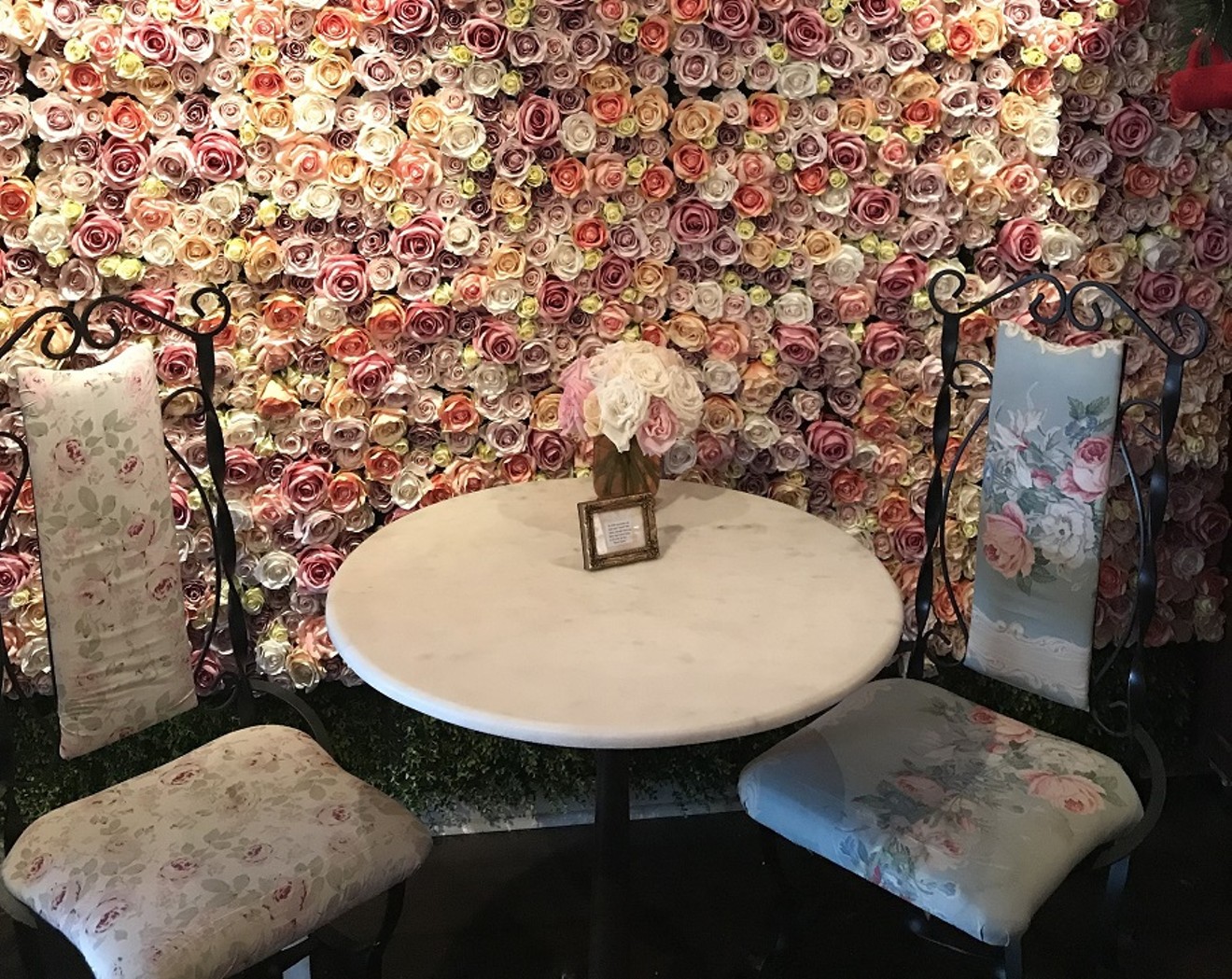 Ann's Rose Wall is a cherished staple of the Las Olas all-in-one coffee, wine, and flower shop. Ayurella Horn-Muller
Akin to a literary secret garden, a book represents a world of escape from the high-intensity, socially-charged, everyday scenarios that can frazzle any introvert. Between the pages of facts and fiction, those of us who recharge by our lonesome can finally let go of the exhaustion from the overbearing company of others. Absorbed in alternate realities, we can relax to the soothing sounds of paper rustling — or an e-book flick of the wrist — as we eagerly devour written utopias.

We don’t ask for much, but we do prefer comfortable nooks to swan dive into those textual fantasies. As holiday season inches upon us, so does the uncompromising chaos of family reunions: Little nieces and nephews run around screaming as their parents day-drink and college kids returning home for the break endlessly complain.

Amidst all that noise, there’s arguably nothing worse than having a stellar book awaiting your full attention without finding anywhere to read it. And let’s face it: we like to indulge in a flaky, warm, multi-layered pastry in between sips of frothy artisan crafted cappuccinos while we do the deed — far, far away from bickering toddlers and anxiety-ridden households.

Envision a quirky, tropical cafe where you’re welcome to lounge among the greenery for hours or a hideaway with walls of paperbacks nestled on the corner of an otherwise busy avenue. We've handpicked Broward's idyllic book spots that'll help you embrace Michelle Obama's inspiring prose in the autobiography of the year or J.K. Rowling's latest Fantastic Beasts screenplay. Consider this a guide for the book lovers in all of us. The Alchemist
Photo by Clarissa Buch
1. The Alchemist. Say what you will about Paulo Coelho's, uh, supposedly Satanic background (in no way is that a joke, sadly) but the man can write. The Alchemist is not only an internationally bestselling book with millions of copies sold worldwide and translations in approximately 80  but quotes from the fictional narrative of a boy seeking his purpose frame one of South Florida's most beloved coffee havens.

"And, when you want something, all the universe conspires in helping you to achieve it," is one of these sayings adorning the walls of the café nestled into a bohemian pocket of Broward's metropolitan universe. Colored umbrellas dot the outdoor area, where on any given time of day people (and one fluffy, callously cool cat) can be found sipping otherworldly iced coffee and nibbling on trademark artisan flatbreads or leafy sandwiches in the shade. Perhaps most bewitching is the greenhouse effect of the patio, where plants and flowers intermingle like lovers basking in the golden rays of sunlight. We dare you to step into this charming space and not immediately desire to read something cover to cover. Open 7:30 a.m. to 5 p.m. Sunday through Saturday at 2430 NE 13th Ave., Wilton Manors; 954-673-4614; thealchemist.cafe. 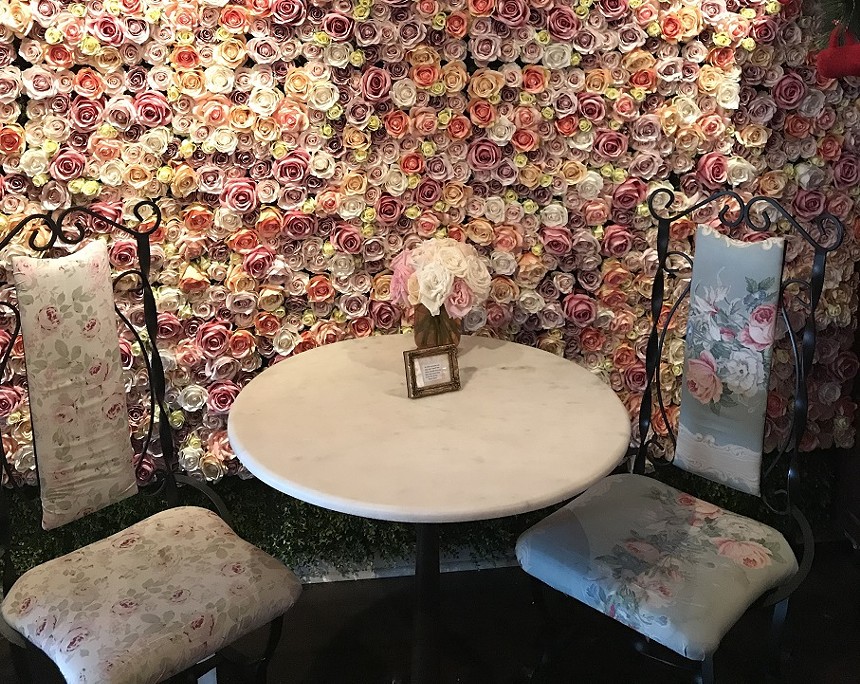 Ann's Rose Wall is a cherished staple of the Las Olas all-in-one coffee, wine, and flower shop.
Ayurella Horn-Muller
2. Ann’s Florist Coffee and Wine Bar. It's hard to imagine that anywhere could top the intoxicating garden effect of The Alchemist, but daresay we've found a place that is just as worthy for those seeking that picturesque spot to read. Ann's Florist Coffee and Wine Bar is situated in the heart of one of Fort Lauderdale's most renowned locations. Walk in and your senses will swim in the heavenly aroma of fresh flowers, which can be bought in one section of the bewitching space. Blooming buds also line the cafe's famous "Rose Wall."

Instagram addicts go nuts in a place like Ann's, which deftly mixes flourishing appeal with rich espressos and jaw-dropping chandeliers hovering over finely crafted oak furniture. Ann's is also one of the oldest remaining family-owned businesses on all of Las Olas Blvd. Taylor Fuentes is the manager, and her grandmother started the business 45 years ago. "What is a better combination than flowers, coffee, wine champagne? That's like every girl's dream," she says. Fuentes adds that local book clubs frequently use Ann's as their meeting place. Customers are also encouraged to settle indoors with their drinks or on the patio to read and work. "Start in the morning and end it off all night! You can spend all day here." Open 9 a.m. to 5:30 p.m. Monday through Saturday at 1001 E. Las Olas Blvd., Fort Lauderdale; 954-761-3334; annsfloristlasolas.com. 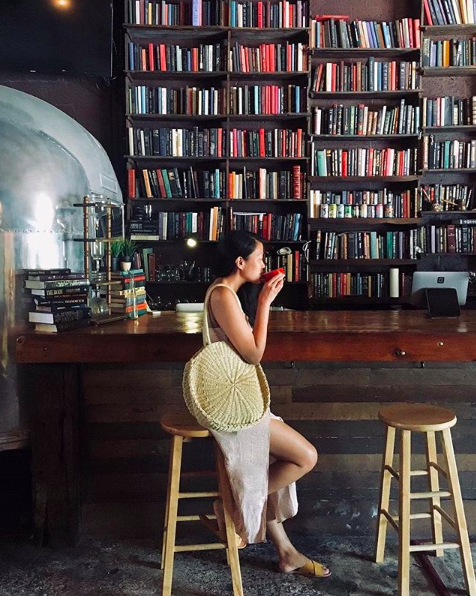 BREW Urban Cafe is one of Fort Lauderdale's most underrated book sanctuaries. Bibliophiles, unite.
Maida Monte
3. Brew Urban Cafe Next Door. Brew Urban Cafe puts the funky in Fort Lauderdale's espresso bean scene. If "hipster" were still an accurate term to use to describe something niche, Brew would champion that identifier with its locally sourced organic products and  assortment of vintage furniture. Originally around since 2000, this family business has been fighting to keep its doors open for nearly two decades, with multiple closures and rebrandings over the years. Through it all, they've racked up a loyal following of customers, who come for the vibes and the java.

Evenings see mochas get traded in for beers, as Brew becomes Next Door, a bar for those who like to booze and hear live jams. So, try to avoid sticking around past 5 p.m., when things tend to get a little crowded with partygoers.

Bottom line: Brew knows good coffee and the wall overflowing with books begging to be read invite avid literature fanatics like nowhere else can. Open 7 a.m. to 7:00 p.m. Monday through Saturday and 8 a.m. to 5 p.m. Sundays at 537 NW First Ave., Fort Lauderdale; 954-357-3934; brewurbancafe.com.

Coffee feeds a bookworm's soul.
Photo by Michele Eve Sandberg
4. The Grind Coffee Project. Independent coffee shops are making a comeback (thank God). The Grind Coffee Project's story is particularly unorthodox: founder Yoni Martin has been obsessed with coffee production since he was 17. After moving to South Florida, he ran an espresso bar right out of his garage because he missed the community-centric staple of Milwaukee. From there, loved ones convinced him to set up shop in the nearby farmer's market, until his own spot become a reality.

Martin spoke to the New Times back in 2013 when Grind first opened its doors to the public. "I'd like to see Fort Lauderdale have a better coffee scene." Years later, Martin remains serious about the craft of "" and it shows in the locale's growing customer base, with tourists and old-timers alike stopping by for a brew or two and vegan-friendly bites.

Even better is the hospitable atmosphere of The Grind. "Drink coffee, be awesome" shines in neon lights from the wall inside, reminding customers to smile as rolling office chairs line timbered tables. Oh, and a detailed sketch of George Washington's upper body stares at those relaxing in the area, offering up a strange sense of presidential comfort. Everything about The Grind screams: "stay and hang out, we want you here." So get to stepping and head on over to this dream of a hash house. Open 8 a.m. to 2 p.m. Monday through Friday at 599 SW Second Ave., Fort Lauderdale; 954-774-0555; grindcoffeeproject.com. 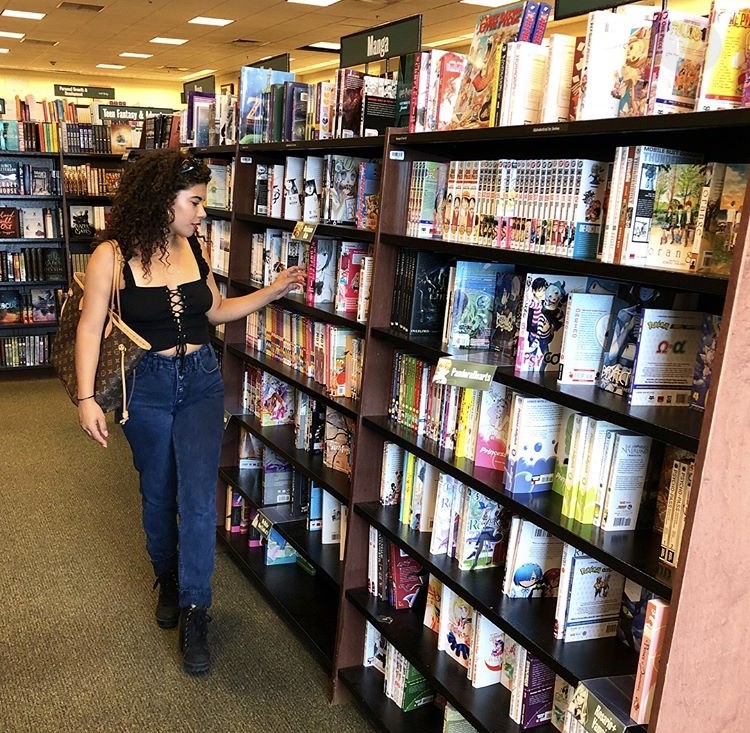 The lone wolf remaining in a wave of chain bookstore closures, Barnes and Noble is America's largest book retailer.
Chasity Ann
5. Barnes and Noble. Would this be a tried-and-true book lover list without the reigning queen of book merchandise herself? Good ol' dependable Barnes and Noble: It's expensive as all hell to purchase your books from the corporate bookshop, but what it has that other retail spots lack is vast amounts of space to settle in and read your life away.

As cringe-worthy as it is to admit that a chain retailer is a top getaway, here's why Barnes and Noble is the way to go this holiday season: two floors of hundreds and hundreds of shiny new novels beckon anyone who geeks out over the art of consuming words, and any true bookworm knows that nothing can replace the mystical feeling of holding a text in your very hands. No one in the 954 has quite the collection that Barnes does, which makes it all the more alluring.

Jiving to get your hands on John Grisham's latest NY Times bestselling courtroom-drama-meets-murder-mystery? Or are you one of the 90 million voracious readers keener than a green bean to learn everything there is to know about the history of the Targaryens for Game of Thrones Season Eight? Well, the winning part of Barnes and Noble is no matter your bibliophile wishes, it'll be there. The store also earns bonus points for being the only Broward bookshop that's open until late into the night.

Whether you sit upstairs in one of the chairs buried in the back of rows of bookshelves, down in the cafe, or plop yourself right down in between the aisles themselves, you can knock out chapters of words that fling you everywhere from outer space to adventures in underground caves to the psyche of superheroes. Open 9 a.m. to 10 p.m. Monday through Saturday and 9 a.m. to 9 p.m. Sunday at 2051 N. Federal Hwy., Fort Lauderdale; 954-561-3732; Holiday hours extended, view at barnesandnoble.com.
KEEP NEW TIMES BROWARD-PALM BEACH FREE... Since we started New Times Broward-Palm Beach, it has been defined as the free, independent voice of South Florida, and we'd like to keep it that way. With local media under siege, it's more important than ever for us to rally support behind funding our local journalism. You can help by participating in our "I Support" program, allowing us to keep offering readers access to our incisive coverage of local news, food and culture with no paywalls.
Make a one-time donation today for as little as $1.
Ayurella Horn-Muller is a South Florida native, Florida State University alumna, and freelance journalist. She covers arts, culture, and music for Miami New Times and news for New Times Broward-Palm Beach. You can also catch her work in Forbes, Elite Daily, Film Threat, Elephant Journal, and Face the Current.
Contact: Ayurella Horn-Muller
Follow:
Twitter: @ayurellahm