The Olive Garden doesn't serve tripe. That's OK, but it also doesn't offer fresh pork or beef braciole, chicken scarparielo with homemade sausage and mushrooms in lemon sauce, pignoli-crusted snapper over spinach, and more than 40 types of pasta dishes -- and that's not OK, which is one reason why those seeking moderately priced, robust Southern Italian food are far better off at Zuccarelli's. Another reason is that the meatballs aren't made en masse but rather in the caring hands of the Zuccarelli family -- papa Ralph, mama Frances, and daughter Olimpia -- and Chef Buddy Kratz. They also make the sausages, mozzarella cheese, pastas, breads, and desserts and have been doing so for 23 years, much to the gratitude of a fiercely loyal clientele -- most of whom the staff here knows by name. This rustically attractive restaurant puts out some outrageously delicious pizzas too, and there's hardly an item on the absurdly extensive menu that costs more than $20. 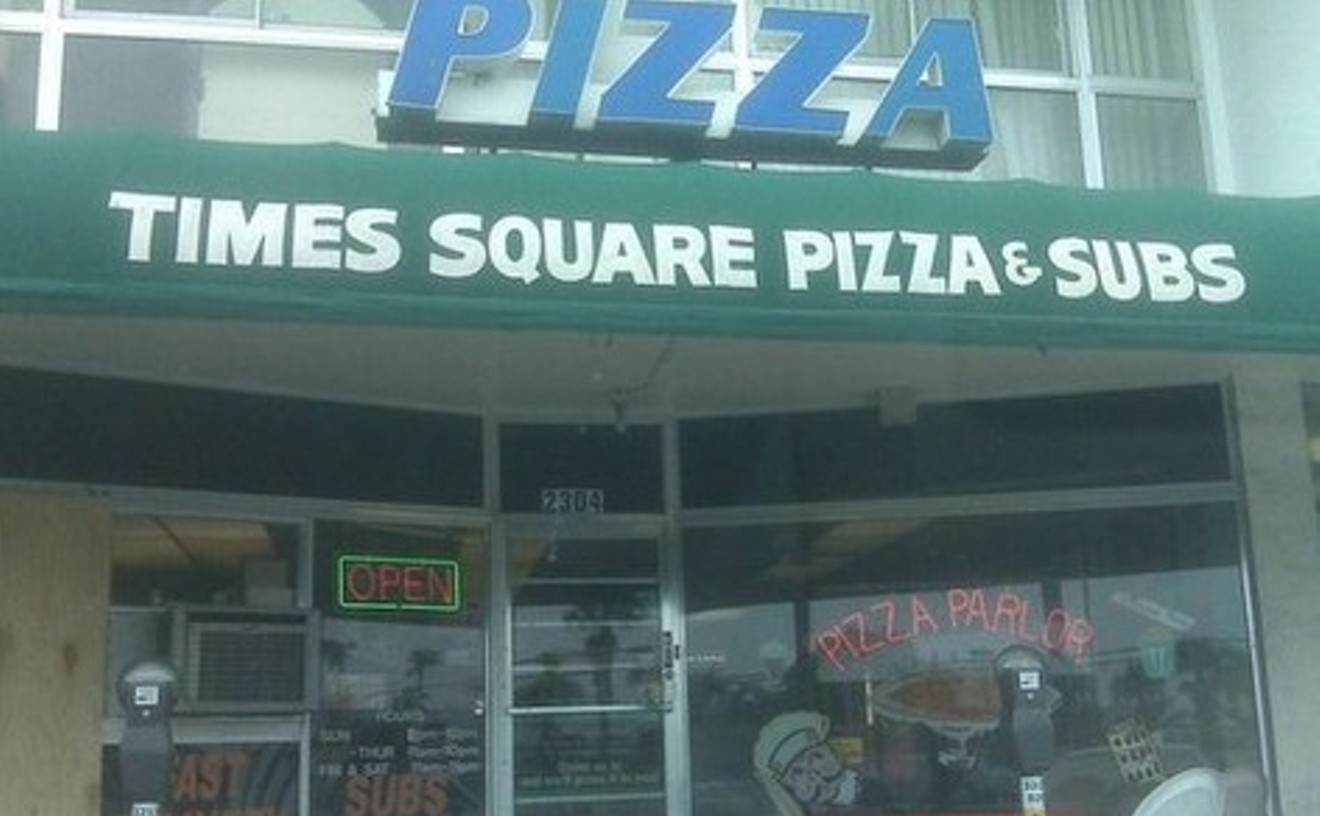 As you eat your way through this maniacal world, exposing the recesses of your mind, you might condemn the budded tongue as a forgetful little muscle. Not so. It is a passionate appendage that betrays our animal lust for the simple things in life, and once it's introduced to the unfathomably delicious slice ($1.75) at Times Square Pizza, your heretofore complicated life will revolve around the corner of Oakland Park Boulevard and Federal Highway. Gold-chained, strong, silent types slave at the ovens in this 8-year-old New York-style eatery, then deliver your slice right to your table. No frills. No chatter. Just slice. What's their secret? Is it the perfectly heated ovens or the high-quality Grande mozzarella cheese? Don't pluck the mystery; just obey the buds. Oh, by the way: It's a sweet spot to hit on your way home from the beach.

More than 300,000 South Floridians describe their primary ancestry as non-Hispanic Caribbean or West Indian. That's a good thing, because it means there are plenty of places to get really good West Indian food. Heck, you could throw a rock almost anywhere within Broward and Palm Beach counties and it would probably fly through the window of a Caribbean restaurant. Well, wind up, Dontrelle, and cast your stone toward Caribbean Choice Restaurant and Bakery in West Palm Beach. Owner Don Smith brings his island flavor from Jamaica via the Bronx and serves up Caribbean favorites such as beef patties, jerked chicken and pork, and roti. And if you're in the mood for fish, escovitched snapper and steamed kingfish are on the menu as well. Add pigeon peas and rice and you've got good times. Whether dining in for a quick sitdown meal or eating on the run, every wanga gut (big eater) this side of Kingston can get his or her fill.

Put on a shirt with buttons and walk with your head upright. The doormen have no idea you drove up in a hoopty with a broken taillight. This place is a palace, a straight-up, steel-and-glass, 998-room hotel palace, with a lobby full of palm trees and waterfalls and a piece of $7 pie on the restaurant menu. It comes with a slice of lime on top, nestled into a puff of whipped cream, and smells like lime cologne. Walk out the back, past the pristine swimming pool and the fragrance of chlorine, past the fat-bottomed girls in bikinis and the pale men with gold chains alligator-wrestling their small children, to the second-story deck overlooking the beachless edge of that petulant, churning, blue-versus-green Atlantic expanse. Plop down into the deck chairs more comfortable than a mother's hug, recline, savor the cool shadow of the massive hotel and the breeze and the crish-splash sound of the ocean and the crumbly sweet crust and kids' laughter and the moist filling and the distance of it all and even the last juicy crumbs, and take just a second to realize that this is some pretty goddamned good pie.

We're gonna be right there.

I dunno. What about the carbs?

C'mon, it's been three weeks.

The light's still on.

What about the carbs, though?

What about the chocolate/vanilla swirl? With Heath pieces? A small one is only $2.65.

What about the carbs?

Pity poor Haiti, wracked by poverty and continual political unrest. Judging by Pollo Kreyol, these put-upon islanders must take great solace in the zesty fare they've concocted through the years. Housed in a defunct fast-food joint, this eatery is a magnet for Creole speakers and offers handy drive-through service as well as sitdown. You won't find any menus, billboards, or placards explaining the food, however; you'll have to ask if you're unfamiliar with this cuisine. The three or four meat dishes are lined up cafeteria-style, and for the set price of $5, you get a massive mound of your choice of meat, rice, beans, and plantains. If the gods are favorable, you'll happen in when that day's offering is pig feet stewed with okra. If you need a little time to build up courage for the hooved end of pork, there's always beef, deep-fried pork, chicken, and goat main dishes, delicately curried with green peppers, potatoes, and onions. Open 11 a.m. to 10 p.m. Monday through Saturday and 11 a.m. to 9 p.m. on Sundays.

It's Sunday afternoon and you've got some room to spare after a medium-sized lunch. You're in the mood for dessert but don't know whether to have something cold and creamy or crisp and flaky. In this case, the simplest solution is to head over to Sonny's Gelato Café and let them choose for you. Sonny's offers roughly 40 flavors of Italian ice cream in cups and cones. For a single serving, prices range from $2.75 to $4.75. For larger, take-home orders, there are pints, quarts, and tubs (ten gallons). If you prefer something a little warmer, there's an assortment of baked goods as well, including cheese cake (New York, cranapple, or ricotta for $2.75 to $3.75 a slice), tiramisu ($3.75 per square), cannoli ($1.95), and biscotti (cinnamon hazelnut, chocolate chip, and almond, $8 per pound). And to keep your tongue warm, Sonny's has plenty of espresso and cappuccino that you can sip while relaxing in the piazza-like outdoor patio. Sonny's Gelato Café opens at 10:30 a.m. Monday through Saturday and 1 p.m. on Sunday.

Duck confit, a specialty of southwestern France, is one of the world's oldest preserved foods and, because of the technique involved in its preparation, serves as the ultimate litmus test for judging the skills of a French kitchen. First, the duck gets dry-rubbed in herbs, spices, and coarse salt. Next, it is soaked in brine, drained, dried, cooked slowly in fat, covered in fat, packed tightly in a jar, and tucked away in a cool dry place. Finally, the duck gets removed from storage and placed in a hot pan until the skin is crisped and the meat warmed (don't worry about this being bad for your diet -- no carbohydrates!). Chef-owner Claude Pottier's duck leg confit is, quite simply, the finest around. But those who want to duck the confit can find equal comfort in duck pâté, escargots drenched in garlic butter, and all manner of fresh seafood. Cafe Claude also boasts a heady wine selection, friendly service, moderate prices, and a dessert cart so complete that it resembles a patisserie on wheels. Last, and least, Claude's early-bird special is Deerfield Beach's finest.

More than 30 years after Hoffman's Chocolates started in a dinky Lake Worth storefront, the place is now one of the country's premier candy makers. Sure, it's long been a favorite of Palm Beach County sweet tooths. They've flocked to Hoffman's for years, if simply for the coconut cashew crunch, a heavenly sweet and sugary concoction that goes for $6.95 a pound. But now the secret's out. Bon Appetit magazine has named Hoffman's one of the country's best chocolate makers, and the Wall Street Journal has claimed it has the best Easter baskets anywhere. The $75 wicker basket comes stuffed with toys and candy, including a six-ounce bunny and an eight-ounce fudge egg. Working out of a one-acre headquarters in Greenacres, Hoffman's employees claim the secret is in the chocolate recipe, made from a blend of beans, mostly from Africa, that are specifically roasted for the company. Hoffman's claims to have a cocoa powder and cocoa butter content that rivals any of the big-name candy makers. That's the secret, apparently, to the well-known chocolate-covered strawberries; Hoffman's are cell-phone sized and covered in so much dark, white, and milk chocolate that it pools beneath them. They're available only on Friday for $19.95 a pound. There's talk at the company of expanding outside Palm Beach County, but with five stores and an airport location, you won't need to make a long drive for some of the country's best chocolate.

Results from a recent government survey on diet and health show that the average person gained three pounds from just perusing the menu at European Deli & Restaurant. A breakdown of the numbers reveals that those who read only the menu sections regarding Friday and Saturday specials put on only a pound; these include Wiener schnitzel, schnitzel à la Holstein (with egg, capers, and anchovies), sauerbraten (marinated beef in sweet and sour gravy), and roulden (beef rolled around bacon, onions, and pickles). A glimpse at the descriptions of homemade smoked kielbasa, stuffed cabbage with boiled potato, fried leberkase, and pig knuckle with sauerkraut added a pound and a half. The final half-pound was tacked on by combining the knowledge that all dinners come with dumplings or spaetzle and the understanding that you can't really eat here without indulging in at least one tall, iced pilsener glass of Erdinger draft. The conclusions of this survey didn't take into account the European Deli's numerous imports or prepared foods, and further experiments are under way to gauge the possible poundage put on by reading about the numerous thick and succulent sausages. The wurst is yet to come!