Best Place to Be a Carnivore

Colby++Katz
Unfortunately%2C+the+skilled+grill+cooks+at+The+Knife+aren%27t+given+much+to+work+with
Oh sure, the Knife has a salad bar, vegetables, pasta, and the like. They got pork too, along with chicken, if you're in a fowl mood. But this place is all about the beef. We're talking brisket, roast beef, flank steaks, T-bones, ribs... all things bovine. The place has got dead cow aplenty. Hell, you can feel Clara Peller's ghost hanging in the room. And best of all, it's all you can eat. That's right. For dinner, plunk down $20.85 (Monday through Thursday -- weekends, two dollars more) and eat meat until your arteries crystallize, your heart palpitates, and your digestive system grinds to an oh-so-satisfying halt. Mainline the grease, if you like, though the place is BYOIV. Our only regret is we don't have four stomachs like our big, dumb, delicious friends. We cavemen; watch us eat.

Chris Bellus
Hiyeee! And, like, so totally welcome to the 8-month-old baby bean, Java Boys in Wilton Manors. Oh my God, like, what should you get? The regular coffee ($1.50 to $1.90) is supposed to be pretty killer -- not like that corporate diarrhea, eww -- but bore your taste buds to death! Come on, so at least get a frothy latte ($2.50 to $3) or one of their iced lattes and mochas ($2.75 to $3.25). Seriously, speak truth: Do you feel the munch? Break that starvation diet for, like, ten seconds and take a bite of this carrot cake ($3.95). Fine, go get your own crème brulée cheesecake ($4.25). You know you're just going up there to flirt with (owners) Ly and Steve. OK, OK, just kidding. But tell them about your pink faux fur handcuffs, 'cause precoffee-shop leisure life, they were both law enforcement studs. Such a major turn-on. Faux fur, tell them. Dare you. OK, meet you on the plush couches, where we can watch videos of Kylie Minogue sunbathing and Madonna and Britney almost making out until superlate (midnight on weekdays and 1 a.m. on Friday and Saturdays) when they throw us out with their big, muscular arms.

The red-winged blackbird inhabits marshes and is known for its complex vocalizations. The orchard oriole can be found in the mesquite shrubs of Arizona and is characterized by modulated song. The early bird congregates in South Florida strip malls from 3:30 to 5:30 p.m.; its distinctive cries of joy can be heard for miles around: "Cheap! Cheap! Cheap!" This bird is a savvy menu-peruser with a hearty appetite and a sharp eye for picking the most susceptible restaurant owners as prey. A creature of habit, the early bird can be espied each evening at one of its favorite new nesting places: The Broadway Deli. This cordial deli/restaurant offers a full dinner of consistently well-prepared food, starting with a complimentary bowl of chopped salad and basket of home-baked breads to peck at. Most diners choose to begin their meals with bowls of perfectly light matzo balls in rich, noodle-laden chicken broth, followed by main courses like roast chicken, sweet-and-sour stuffed cabbage, or brisket of beef. Each entrée is accompanied by choice of two sides (make one of them kasha varnishkas), soft drink, and dessert -- all for the chirpy price of $7.95 to $9.95. Many other species of diners flock here for breakfast, lunch, and post-early-bird dinner too. 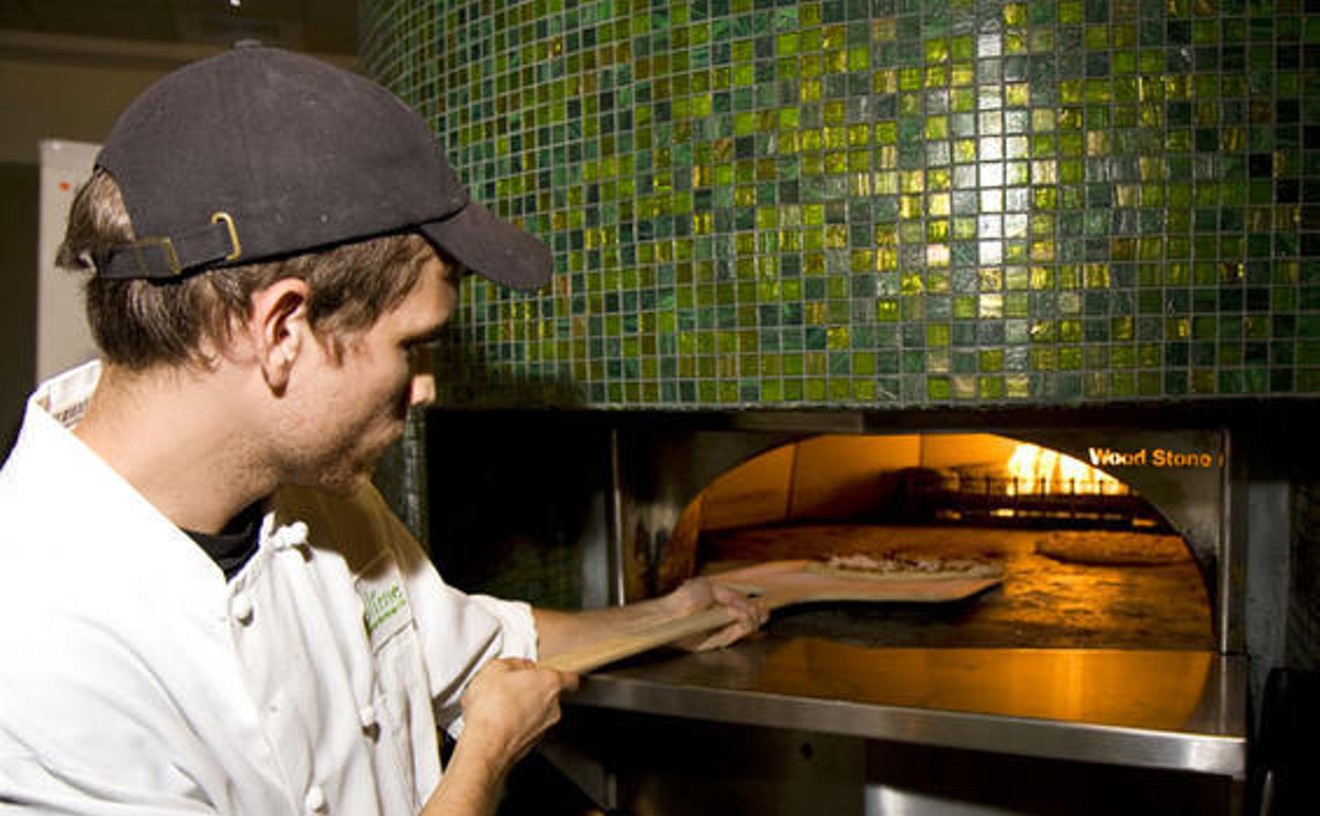 Michele Sandberg
Mad cow hasn't changed anything -- many restaurateurs still consider vegetarians the al Qaeda of American diners. Sublime offers a much-needed refuge of respect to these oft-abused eaters and does so in more convincing fashion than anyplace else in the region. The 150-seat room is Zen-like serene and tastefully enhanced with skylights, potted plants, and waterfall windows. The food products have been harvested via sustainable or certified organic practices, and the wines come from chemically unadulterated crops. Even the olives and vodka in the house martini are organic. More significantly, the delectable cuisine ranges from wholesome nutty grain bread paired with hummus that jump-starts the meal, to appetizers like fire-roasted artichoke or wood-oven pizza, to main courses like polenta short stack with tomatoes and arugula and stuffed cabbage swelled with brown rice, diced fruits, and nuts. Sublime keeps prices low, with most entrees between $12 and $14, and 100 percent of the modest profits are donated to promoting animal welfare and the vegan lifestyle. Which means that when you eat at Sublime, you will not only partake of the finest vegetarian fare around but you'll also perform something of a philanthropic act.

The menu is chock-full of wondrous Persian cuisine -- which is a politically innocuous way of saying Iranian food. All this may seem quite exotic, but many of the offerings here are surprisingly familiar, like hummus, stuffed grape leaves, and kebabs of chicken, salmon, tenderloin, and lamb -- all tasty renditions but nothing to declare a fatwah over. It's the other items listed that catapult Caspian past the ubiquitous, formula-driven pita emporiums. Absolutely distinctive (and delectable) dishes include khoresht stews of beef, chicken, or lamb; fragrant ashe reshteh, soup plumped with kidney beans, garbanzos, lentils, and noodles and greened with spinach, chives, cilantro, parsley, and mint; and khoresht e' fesenjoon, chicken with an audacious pomegranate/walnut sauce -- jars of which are available for sale next door at Caspian's grocery, Nu Taste. The menu states that "nearly three thousand years of history, tradition, and love have gone into the meals you are about to enjoy," and yet prices are no higher than that of other Middle Eastern establishments that have only 2,000 years behind them. You can't beat that for a bargain. 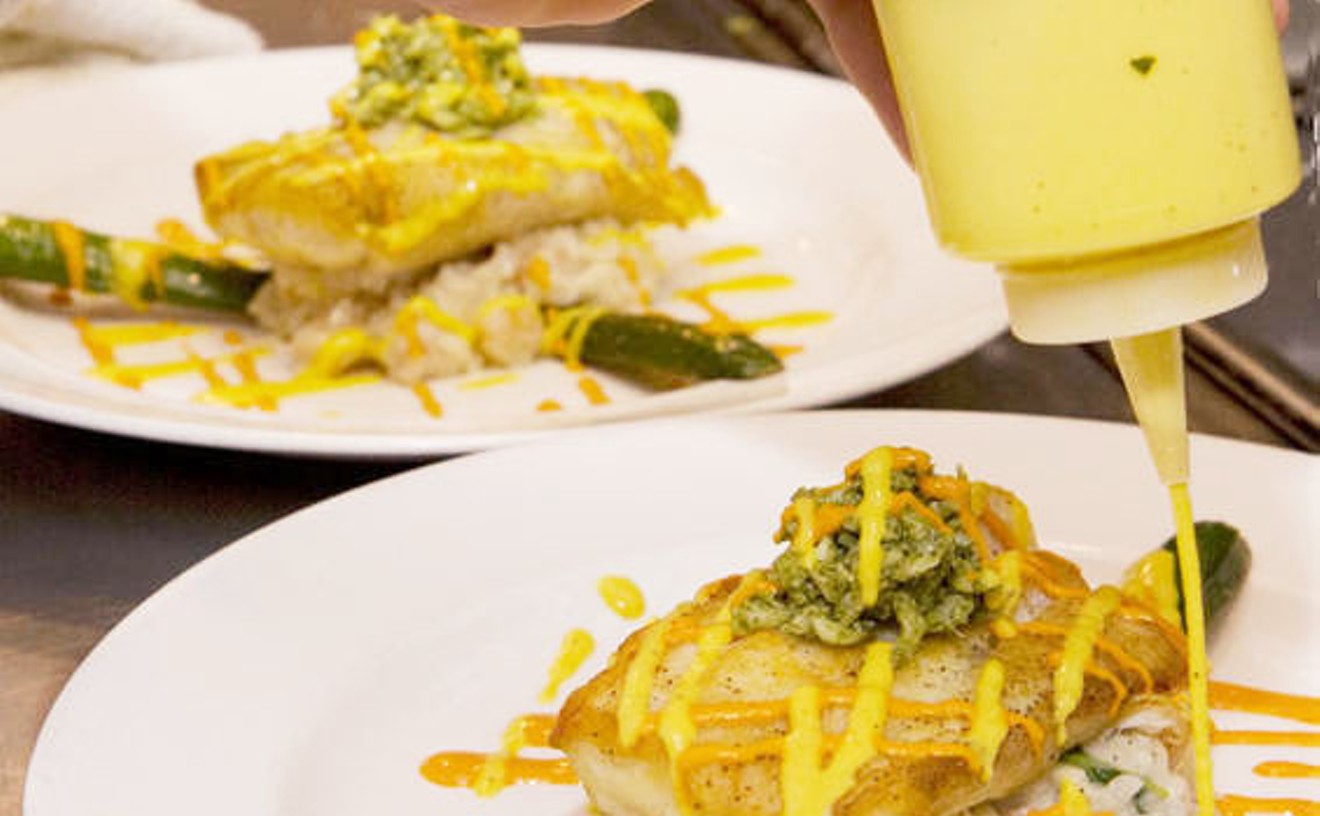 Claim to Fame: One of South Florida's most sought-after and most restless chefs

What he's done for us lately: He kicked off the year by opening Johnny V Restaurant/Lounge on Las Olas Boulevard. This after hopping around South Beach and Delray Beach for a decade or so, experimenting with Caribbean and Southwest cuisines, making his name among comfort-food-loving diners. The new place is getting raves. There's something familiar but subtly different about dishes like sage-scented Florida dolphin (with rock shrimp-flecked plantain stuffing) or the lobster shepherd's pie. This is American home cooking with attitude.

What it takes: "At certain levels, either you have it or you don't. You can learn your cooking skills. But the creative end? That's a gift."

Located just west of Presidential Circle in Hollywood, China Lane is nestled in a strip mall that gives it the perfect location for movie night. After all, since Blockbuster Video is one block east, you can pick up that new release, then grab your piping-hot order of moo goo gai pan ($8.95). But this Chinese restaurant offers much more than anonymous takeout. With a book-sized menu advertising dozens of authentic Chinese dishes, China Lane serves up the spicy, saucy, and sweet on beds of white and fried rice until 10:30 p.m. on Fridays and Saturdays, 10 p.m. all other days. And this ain't Grandma's MSG-filled Chinese joint either. You'll see young professionals and municipal workers nearly every night. This may be due to the restaurant's location in a recently rejuvenated area of Hollywood. Readers' Choice: P.F. Chang's

Best Place for a Volcano Roll and a Thai Friend

Nok arrives at our table, beaming her angelic smile over a plateful of volcano rolls. She sets it down, then brings us more Sapporo. How old could she be? 19? Yet so independent, so brave, here all by herself. We are going to Thailand next week. This dinner is anticipation. "You make me miss my country," says Nok, giggling and struggling for words. "What hotel are you staying in?" Two days later. Bangkok. The telephone rings. Nok's friend. In case we need anything. Why stick to Broward and Palm Beach? Nok is the sweetest waitress in the wooorrrllllldd!

The first thing you'll want to do is buy some tumeric, cardamom, cinnamon, cloves, coriander, and black peppercorns. Next, you'll take a mortar and pestle and crush the seeds (don't grind!). Now you've got your masala spice mix and can begin prepping the rest of the ingredients for your home-cooked Indian meal. No, we're not kidding, and yes, this is exactly why people who want to eat Indian food tend to do so at restaurants. So the question begs to be answered: Where to find a great Indian restaurant? And the answer zips back: "Go to Nabab." The place has all the vindaloos, tandooris, tikkas, and kebabs, along with less common regional treats such as "mild" murgh from Kashmir (with nuts, fruits, and spices), "medium hot" gosht kadai (lamb dish from Peshawar), and "very very very hot" South Indian mirchi masala (lots of peppers). Try making one of these at home -- even if you succeed, the cost for spices alone will exceed Nabab's average entrée price of $10. It's best to eat out when you desire Indian food and bester yet to do it at Nabab.

From the outside, Punta del Este looks like a dive bar. It's located right next to a laundromat called Sexy Suds. But if you're brave enough to go inside, you'll find a lobster Creole ($14.95) that'll make you cream your jeans and fried cassava ($1.75) that's almost better than sex. In fact, if you're not gettin' any, Punta del Este is a food lover's substitute for a night of hot loving. And if you're really advanced, prepare for the threesome. The Punta Del Este Special Combo ($12.95) features three meats (pork, palomilla steak, and chicken), served with rice and beans and sweet plantains. Finish it off with a steaming cup of café Cubano, and then, muchacha, let's rumba! UPDATE: This restaurant is closed.