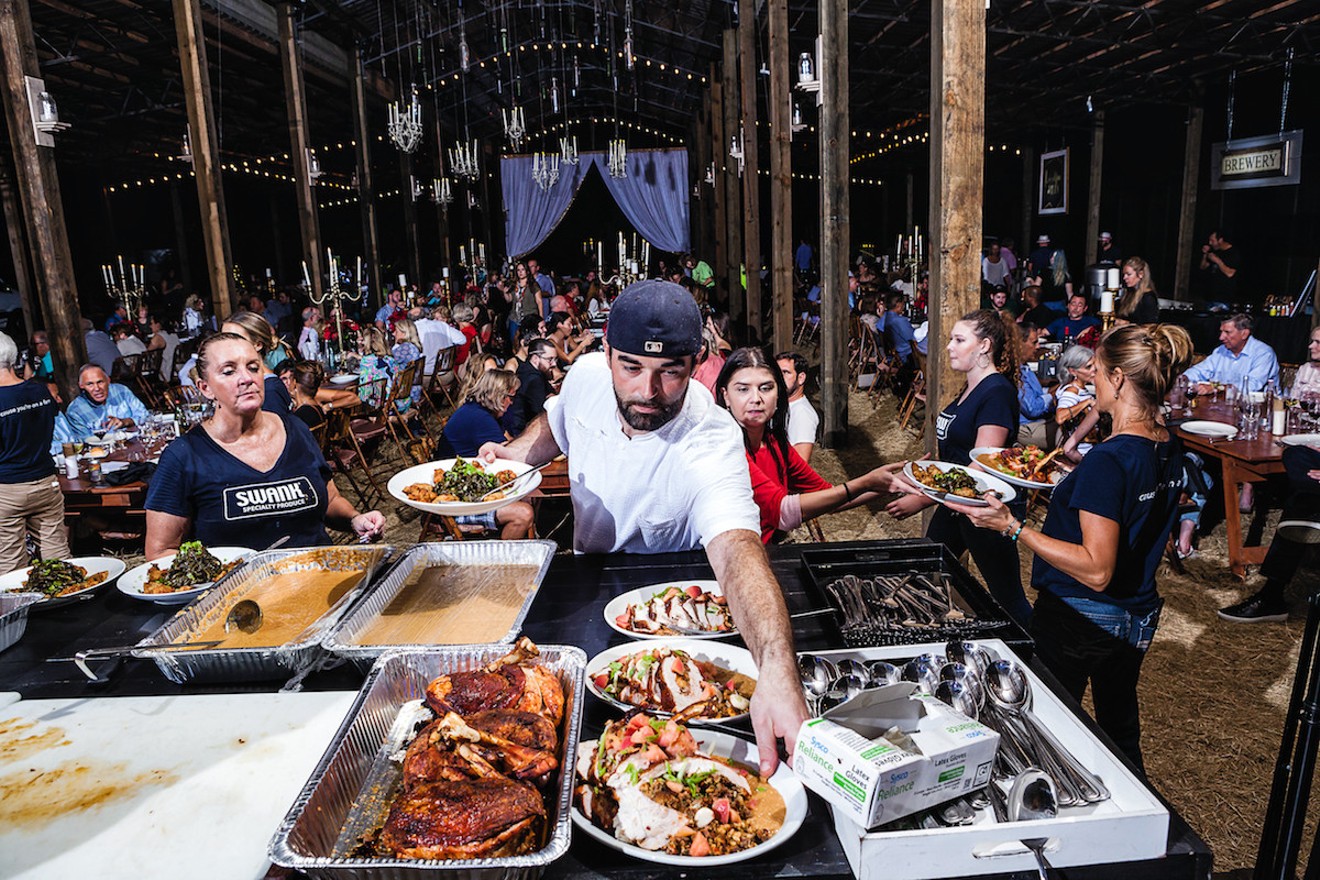 A Swank Table dinner in full swing. Photo by Gyorgy Papp Photography / Papp Photo
By now, all self-respecting South Florida foodies have heard about the seasonal Swank Dinner parties. But if you haven't attended one, it might be hard to imagine what makes these events so special.

Jodi and Darrin Swank are the couple behind the hydroponic farm based in Loxahatchee Groves that's become regionally famous for supplying over 350 varieties of vegetables, edible flowers, and micro-greens for the area’s top restaurants.

Today, they're equally famous for their fancy farm dinners, an idea that took shape after several pleas from local customers who visited Jodi's stand at the West Palm Beach Green Market eight years ago.

An opening reception cocktail kicks off your evening at Swank Table.
Photo by Papp Photo
"My customers would always ask, 'When are you going to do a lunch on the farm?' I took their idea and went to a strong supporter, chef Dean Max, who agreed to come to the farm with chefs Paula DaSilva, Jeremy Ford, Joe Mizzoni, Pushkar Manathe, Adrienne Grenier, Brooke Mallory, and more of his team to have our first farm to table lunch."

During the first lunch-style Swank meal, just over 60 diners gathered under the full sun to attend the farm's first official lunch. Today, guests revel under a massive 8,500-square foot pole barn that is often decorated in the style of a garden ball, a venue that can accommodate up to 240 guests.
The second season saw three lunches, all bringing between 65 to 100 guests. The duo switched to today's Sunday dinners by demand. And this season will see the most dinners — a total of 18 — including the fourth annual White Party, an idea suggested by cookbook author Judith Olney and fashioned after white parties in Paris. The first took place in 2015, with white candles set at every table and guests dressed head to toe in white. The event is capped at 260 and is almost sold out for 2019.

It was successful and the couple decided to continue. They looked to the local chef community to cook at the farm using the same Swank Farm ingredients they featured in kitchens across the tri-county area. Each dinner features local sponsors that help with everything from meat and dairy to fruit and beverages.

What began as just a handful of intimate dinners in 2011 has grown into 18 unique signature events. Last month, Swank Farms announced its seventh season schedule, the latest series of dinner and brunch-style events that will bring together more than 80 celebrated chefs to spotlight the farm's annual harvest season. While the seventh season officially kicked off November 18, with just one brunch and one dinner under its belt, there's still plenty more to go, including the next "Farm Market" themed dinner on Sunday, January 6.
click to enlarge

The amuse-bouche, each prepared by the visiting chefs of the evening.
Photo by Papp Photo
So, what can you expect from these infamous South Florida feasts? A lot of food, wine, and revelry including the photos featured here from the December 2nd Reveillon Dinner featuring chefs Rick Mace, Mark Millitello, James Versfelt, James King, Zachary Detweiller, and Sebastion Setticasi.

A Swank Dinner evening begins with an opening reception cocktail and passed hors d'oeuvres. They're generous portions, and mingling is akin to happy hour at your favorite outdoor bar. If you're still hungry, there's more to come: as you move down the dirt path towards the barn you'll be greeted by the chefs of the evening for an amuse bouche — several small tasting plates from each served up with a toast of champagne or rosé — before moving on to dinner.

The pole barn, dressed and ready for the December Reveillon Swank Table dinner.
Photo by Papp Photo
Of course, there are a few "must do's" along the way. First, attend Darrin's farm talk at the start of your evening. It's an educational interaction that answers all the questions you've ever had about farm life, with drink in hand. Second, it's imperative you visit the Swank pigs and chickens. A small clearing just before the barn allows for some time with the animals before dinner.

By now, you're fully engrossed with the evening's grand finale: the four-course, seated dinner with specialty wine and beer pairings. Don't be afraid to ask for seconds, thirds, or fourths when it comes to the bubbly, beer, and wine. It's bottomless, as long as you keep it paced appropriately.
click to enlarge

Dance to the live music, it's encouraged.
Photo by Papp Photo
And if you're feeling in the mood, get up and dance to the live bands that perform during each event. While Saturday night dinners will have a slightly different flow, they'll still offer a one-of-a-kind experience including hand-passed canapes from each chef and a sit-down, six-course wine pairing dinner.

Last, don't forget to call Uber. They know how to find the farm down dark dirt roads, and it helps to have a chauffeured ride for all that bottomless drinking.

Swank Table Dinner at Swank Specialty Produce. 14311 N. Rd., Loxahatchee; 561-202-5648; swankspecialtyproduce.com.
KEEP NEW TIMES BROWARD-PALM BEACH FREE... Since we started New Times Broward-Palm Beach, it has been defined as the free, independent voice of South Florida, and we'd like to keep it that way. With local media under siege, it's more important than ever for us to rally support behind funding our local journalism. You can help by participating in our "I Support" program, allowing us to keep offering readers access to our incisive coverage of local news, food and culture with no paywalls.
Make a one-time donation today for as little as $1.