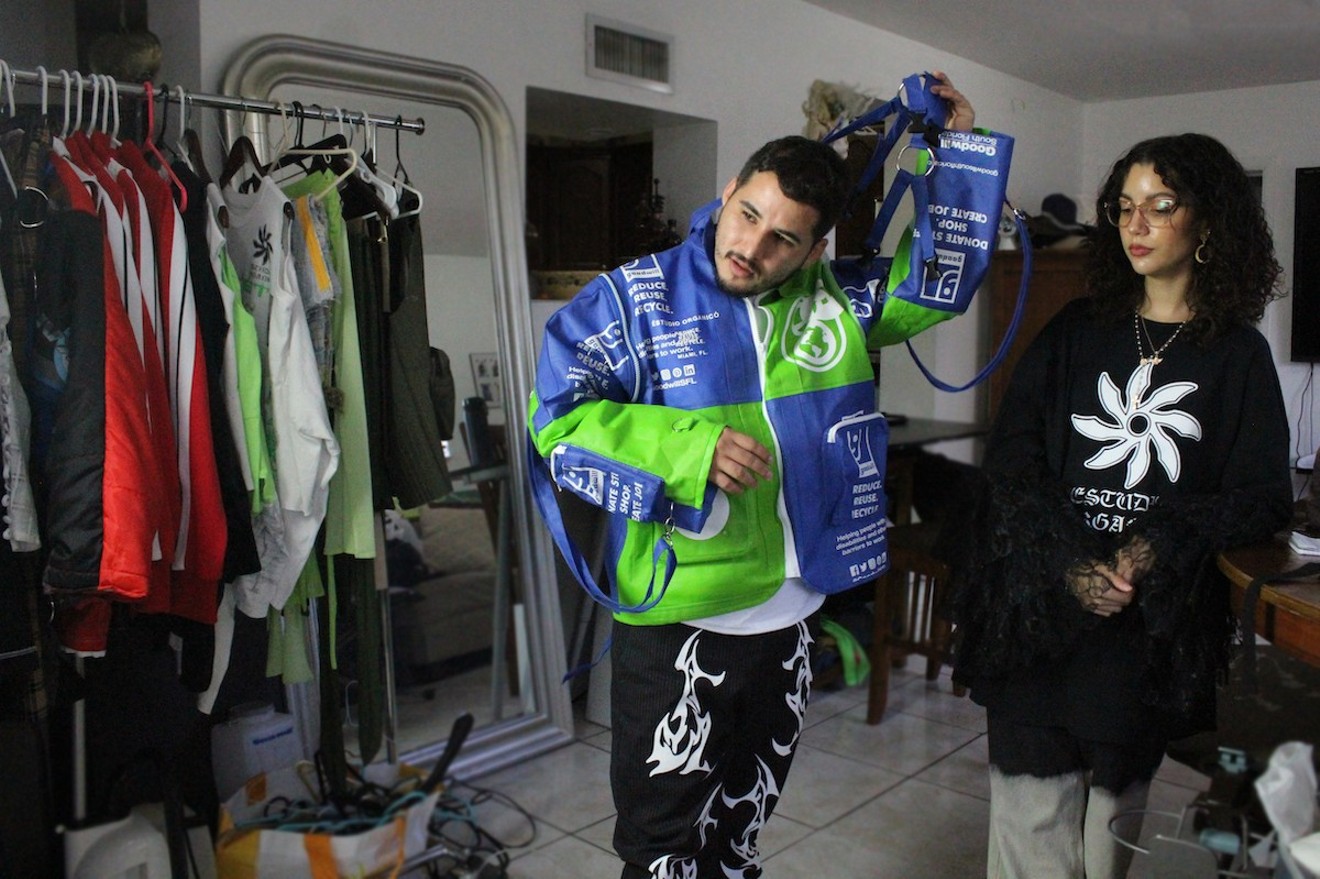 Its designs have earned a reputation for incorporating iconic Florida brands like Publix, Sedano's, and Zephyrhills, and native and invasive species like the green iguana and gopher tortoise. Designers and codirectors Brian Valencia, 28, and Angela Sofia Muñoz, 26, use repurposed materials to create multifunctional garments with a self-described “tropical industrial streetwear” flare.

“To be a fashion designer is to be a problem solver,” says Valencia, who founded the studio in 2020. “We definitely blend our tropical background with a little bit of camp because they do have flamboyant features and extreme contrasts in color.”

One outfit went viral in February when Club Space doorman Alan T turned out in an Éstudio Órganico Publix-themed jumpsuit. From the bucket hat to detachable pants, the fit was decked out in the grocery store's bright-green tote bag.

Valencia’s gender-neutral silhouettes are rooted in structural durability and architecture, which he studied at Miami Dade College.

“Our skirts turn into tote bags, for example," he explains. "That’s something I think is really cool and interesting for a man to wear and be able to switch up. It’s really just a piece of fabric.”

Many of Éstudio Órganico's garments can be unzipped or reversed to transition from sleeves to tote bags, pants to shorts, and pockets to purses. Valencia draws inspiration from his Colombian family, who taught him to design with multipurpose and eco-conscious efforts. He emphasized the impact the world has on the South American country, which makes up a share of the diminishing Amazon rainforest. With the lungs of the world diminishing due to deforestation and climate change, Valencia prioritizes ethically sourcing materials.

“It’s one of the biggest natural forces in the world, and it’s disappearing,” he says. “So there’s an emphasis on being green, with intention.” Éstudio Órganico's Publix tote bag jumpsuit went viral after Club Space doorman Alan T wore it out in public.
Photo courtesy of Éstudio Órganico
Florida, like the Amazon, is home to hundreds of invasive and keystone species. Éstudio Órganico's upcoming collection plans to bring awareness to the environmental challenges brought on by the introduction of invasive species in sensitive areas like the Everglades, with pieces pointing to flora and fauna like green iguanas (invasive), gopher tortoises (keystone), and the lantana camara flower (invasive).

"We're from totally different fashion backgrounds, but I like to think of us as a yin and yang type duality," Valencia adds. "Éstudio Órganico wouldn't be what it is without both of our visions."

Muñoz is pursuing a master's in fashion and luxury brand management at Istituto Marangoni Miami.

"I wanted to incorporate furniture with fashion and functionality," Valencia explains. "I would love to continue working on furniture, but I just don't have the space." A model dressed in Éstudio Órganico poses on a wooden chair designed by Brian Valencia.
Photo courtesy of Éstudio Órganico
Valencia currently works out of his home in Cutler Bay, which he shares with friend Veronica Arroyo, another sustainable designer behind the brand Vaed by VA.

Arroyo sees their work as an antithesis of the fast-fashion movement popularized by stores like Forever 21 and H&M and online sites like Shein.

"What really is the most unsustainable part is the overconsumption and microtrends that are so consistently happening, where people are like, 'This is in, this is out,' and then throw it out or donate it," Arroyo explains.

Approximately 85 percent of American textile waste is sent to landfills every year, according to the University of Colorado's Environmental Center. While many people often try to donate unwanted garments, Arroyo suggests repurposing them entirely.

"If you donate it and it doesn't get sold, they send it to [developing] countries, and if it still isn't sold, they burn them in landfills," Arroyo warns.

Éstudio Órganico's spin on the relentless donation cycle takes the form of a harnessed jacket and detachable vest made of upcycled Goodwill tote bags.

"Big brands and buyers throw out so many defective garments," Valencia says. "I wanted to make something that could hopefully change the industry."
KEEP NEW TIMES BROWARD-PALM BEACH FREE... Since we started New Times Broward-Palm Beach, it has been defined as the free, independent voice of South Florida, and we'd like to keep it that way. With local media under siege, it's more important than ever for us to rally support behind funding our local journalism. You can help by participating in our "I Support" program, allowing us to keep offering readers access to our incisive coverage of local news, food and culture with no paywalls.
Make a one-time donation today for as little as $1.