The Ten Best Things to Do at Florida Supercon 2019

The Night King cosplay at Florida Supercon in 2018. Carina Mask
Nerds don’t like being told what is and isn’t cool. Let’s be honest — they don’t really care. If they did, they wouldn’t be nerds.

That’s the beauty of events such as comic book conventions. They provide a care-free environment for sci-fi, fantasy, and superhero fans who just want to let loose and throw on a Dragon Ball Z or Battlestar Galactica T-shirt. Zero fracks given.

But with Florida Supercon taking place Thursday, July 4, through Sunday, July 7, at the Miami Beach Convention Center, we’ve put together a list of ten events we believe are cool, haters be damned. Think of this as a guide to help you through a jam-packed four-day event. You don’t want to go in completely blind. Only a newb would do that.

The Office Q&A. The Office cast members Oscar Nunez, Creed Bratton, and Kate Flannery are not only signing autographs and posing for photos July 5-7, but they're also reuniting to answer your questions about the HR nightmare that was Dunder Mifflin's Scranton branch. You're definitely going to want to squeeze this one in. That's what she said! 3:45 p.m. Saturday, July 6, in Grand Ballroom A. 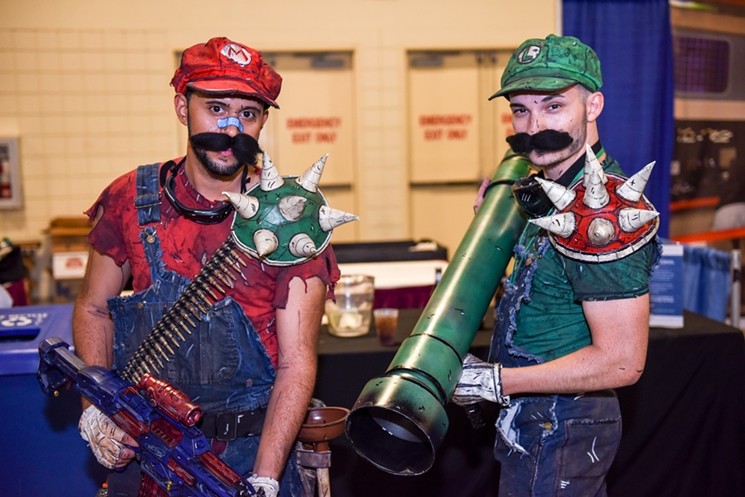 Super Mario Bros. cosplay at Florida Supercon in 2018.
Carina Mask
Florida Supercon Costume Competition. There will be over $5,000 in cash and prizes on the line during Florida Supercon's main cosplay contest, in addition to bragging rights and trophies. Last year's Best in Show winner dressed as Nasus from League of Legends, and you better come correct with your costume if you want a chance at the $1,500 grand prize. But there are also categories for non-pros such as Novice and Junior/Youth, so all skill levels are welcome. 7:30 p.m. Saturday, July 6, in Grand Ballroom A.

Nick Frost Q&A. One of the more familiar faces at this year's edition of Florida Supercon, Frost has appeared in Snow White and the Huntsman and lent his voice to The Adventures of Tintin, but he's better known for cult classics such as Spaced, Shaun of the Dead, Hot Fuzz, and Attack the Block. And you know who likes cult classics? Comic book convention attendees. Frost's Q&A should draw one of the bigger crowds of the weekend. 5 p.m. Saturday, July 6, in Grand Ballroom A.

Star Trek cosplay at Florida Supercon in 2018.
Carina Mask
George Takei Q&A. It wouldn't be a comic convention without Trekkies. And you can expect to see more than a few with four Star Trek alum — George Takei, Nichelle Nichols, Jason Isaacs, and Jonathan Frakes — scheduled to appear at the Miami Beach Convention Center. Takei is the most recognizable of the four, not only for his role as Sulu, but also for his activism, social media following, random TV cameos, and, oddly enough, frequent Howard Stern Show appearances. Now 82 years old, Takei has certainly lived long and prospered. 1:30 p.m. Sunday, July 7, in Grand Ballroom A. 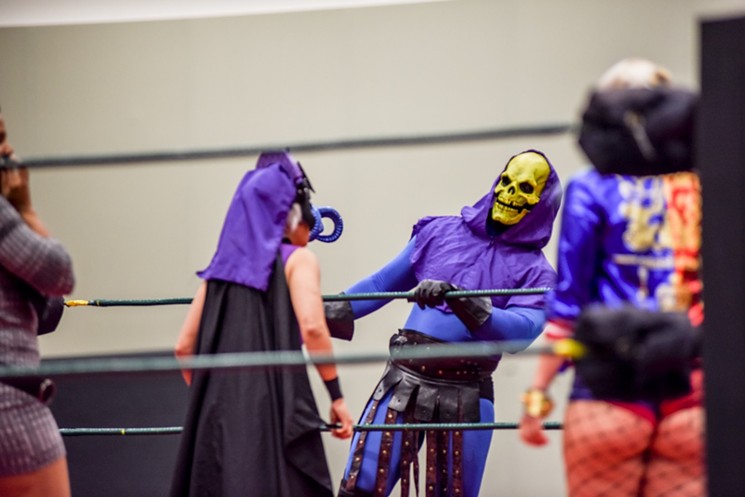 Skeletor steps in the ring at Fantasy Super Cosplay Wrestling at Florida Supercon in 2017.
Photo by Carina Mask.
Fantasy Super Cosplay Wrestling. This daily event is a match made in nerd heaven. It combines both wrestling and cosplay to settle what would happen if, say, Deadpool stepped in the ring with Skeletor and Harley Quinn faced off against April O'Neil. Former WWF Champion Mick Foley made a surprise appearance with Fantasy Super Cosplay Wrestling last year in South Florida to take down Negan. Maybe the Hardcore Legend will do the same this year, seeing how he's appearing at Florida Supercon four times during the weekend. 7:30 p.m. Thursday, July 4; 7 p.m. Friday, July 5, and Saturday, July 6; and 7:15 p.m. Sunday, July 7, in FSCW Arena's Lincoln Road Room.

The Joker meets the Joker at Florida Supercon in 2017.
Photo by Alexander Oliva
80 Years of Batman. The Dark Knight is turning the big 8-0 this year. And to celebrate the milestone, Batman comic book writers Kyle Higgins, Rafael Albuquerque, Steve Orlando, and Greg Capullo are taking part in a panel to discuss all things Batsy. Expect Robert Pattinson's controversial casting to come up at some point because of course it will. 1:15 p.m. Saturday, July 6, in Room 229.

The Young Bucks Q&A. The biggest story in wrestling is the emergence of wrasslin' promotion AEW, a long-awaited alternative to WWE. One of the biggest forces behind AEW is the Young Bucks, a tag team of brothers Matt and Nick Jackson. Fans will have the opportunity to ask them about the new promotion and AEW's upcoming weekly TNT show at this Q&A, which should be pretty easy to find in the Miami Beach Convention Center. Just follow the sea of black T-shirts. 12:30 p.m. Sunday, July 7, in FSCW Arena's Lincoln Road Room.

Jim Starlin Spotlight. Without comic book writer and artist Jim Starlin, there would be no Thanos. We wouldn't have Guardians of the Galaxy teammates Gamora or Drax the Destroyer either. Starlin created the Marvel comic book characters, which have gone on to become major characters in the MCU. You can hear Starlin speak about his creations when he returns to Florida Supercon to discuss his legendary career with Marvel. 1:15 p.m. Friday, July 5, in Room 229.

You know you wanna rock out with these plumbers.
Carina Mask
8 Bit Wave. Think of 8 Bit Wave as the house band for Florida Supercon. The Miami-based group will perform music from your favorite classic video games and anime series daily. But not every performance will be the same. 8 Bit Wave's main show on Saturday, July 6, will focus on music from Naruto, Bleach, and One Piece (known among anime fans as the Big 3). The other shows will combine themes from game franchises such as Super Mario and Zelda and anime series Pokemon and Dragon Ball. 6:15 p.m. Friday, July 5, in Grand Ballroom A; and 5:30 p.m. Thursday, July 4; 10:45 a.m. Saturday, July 6; and 5:15 p.m. Sunday, July 7, in Room 228.

Florida Supercon. 1 p.m. to 1 a.m. Thursday, July 4; 10 a.m to 1 a.m. Friday, July 5; 10 a.m. to 2 a.m. Saturday, July 6; and 10 a.m. to 8 p.m. Sunday, July 7; at the Miami Beach Convention Center, 1901 Convention Center Dr., Miami Beach; 800-598-1055; floridasupercon.com. Tickets cost $30 to $285 via floridasupercon.com/tickets.
KEEP NEW TIMES BROWARD-PALM BEACH FREE... Since we started New Times Broward-Palm Beach, it has been defined as the free, independent voice of South Florida, and we'd like to keep it that way. With local media under siege, it's more important than ever for us to rally support behind funding our local journalism. You can help by participating in our "I Support" program, allowing us to keep offering readers access to our incisive coverage of local news, food and culture with no paywalls.
Make a one-time donation today for as little as $1.