Cecile Richards on 2020 Elections and Florida: "This Is Not a Static State" 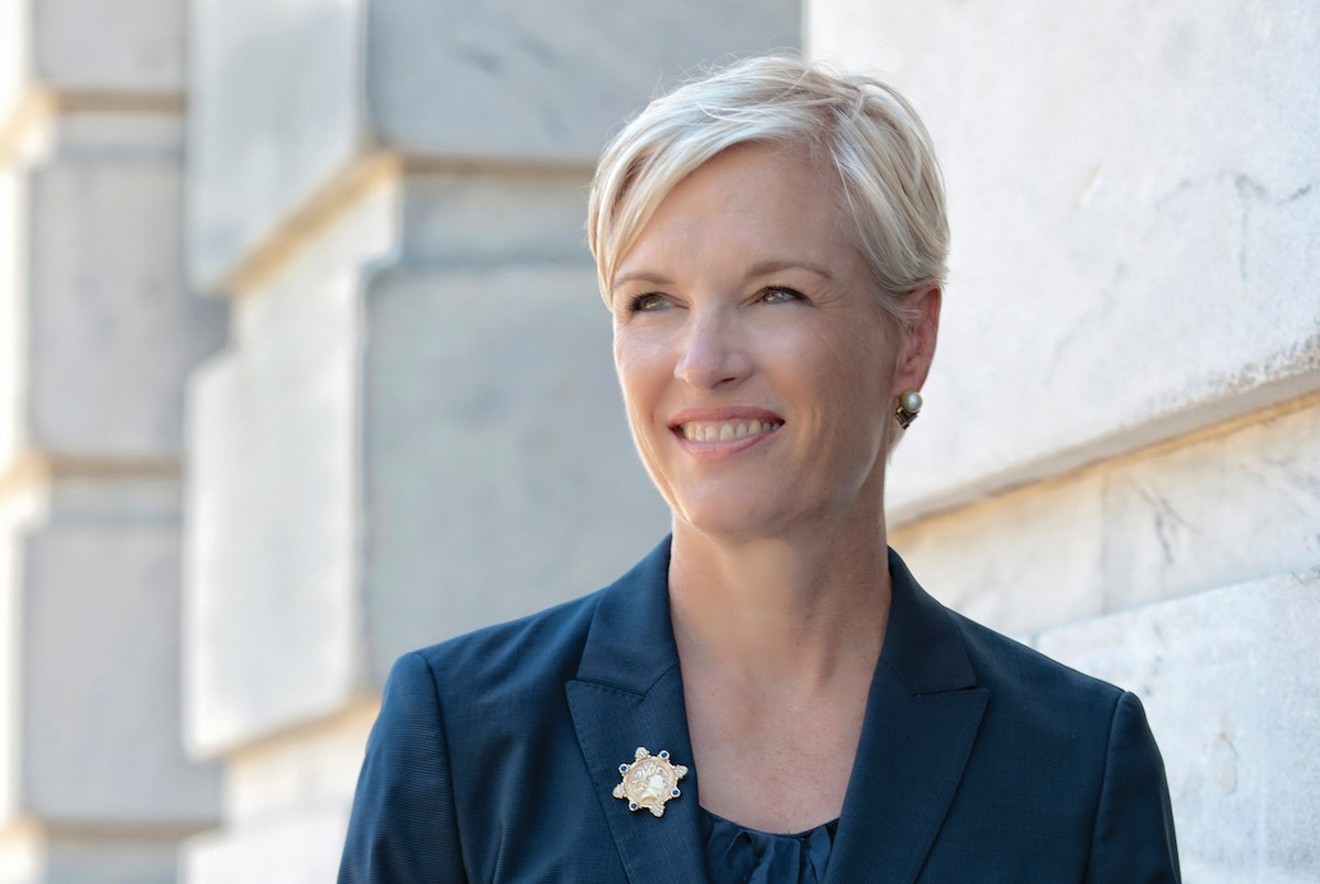 The organizer, women's health advocate, and self-described troublemaker recently spoke at the South by Southwest Festival in Austin, Texas. There, she recalls, "The number one question, no matter what the topic of conversation, the question on every woman's mind is, 'What more can I do?'"

It's the same everywhere she goes: women dreaming of changing laws and policies that affect them and their families, of electing political candidates they can be proud of, even of running for office themselves. And there's perhaps no person better suited to answer their questions than Richards. This is a woman who watched her own progressive mother, the iconic Ann Richards, run for office and win in a conservative state; who began protesting in ninth grade and working on political campaigns at the age of 16; and who, at 60, recently stepped down from a 12-year run as the president of Planned Parenthood.

Novice organizers will find a road map in Richards' new memoir, Make Trouble: Stand Up, Speak Out, and Find the Courage to Lead. The book tells the story of her life through the lens of activism, following Richards from her childhood in Waco, Texas, through the diverse progressive causes and campaigns where she honed her skills, to testifying before Congress in the face of conservative attacks on Planned Parenthood. Richards will appear at Books & Books Friday to promote her memoir, in conversation with Lillian Tamayo, president/CEO of Planned Parenthood of South, East, and North Florida.

Unsurprisingly, Richards has more than a few memories of politics in the Sunshine State.

"I seem to have been in Florida for election night on every losing election and winning election," she laughs. "Florida always plays a unique role in the fortunes of the country politically."

Among her favorite memories: door-knocking on behalf of Barack Obama in the final days of the 2008 campaign. "I spent election night there when we learned we had won the election. So I have very fond memories... even going to Versailles Restaurant and hanging out where there were competing tables of people who were door-knocking for Obama and people campaigning for McCain." She chuckles. "Everything in Florida is bigger-than-life. People have strong opinions."

And despite the outcome of the state's 2018 elections, Richards says Florida is poised for more memorable moments.

"The interesting thing about Florida is that it's such a dynamic state and always changing," she says. "There are parts of the country you can return back to and it feels like it's just as it was, but that's never the sense you have in Florida... This is not a static state. It's not a state where you think, Nothing is ever going to change."

She points to the example of Anna Eskamani, a Democratic candidate for Florida's 47th House district. Richards first met her when Eskamani was working as an educator and organizer. "She and her twin sister were social activists, and I just thought, Oh my gosh, they've got something going on; I'm going to follow her." Richards rooted for Eskamani as she persevered through Republican attack ads, door-knocked her entire district, and became the first Iranian-American elected to the Florida House of Representatives.

"This is a race where no one would have said, 'This is a sure win,'" Richards points out. "It's an example of the kind of young people you're seeing, young women of color in particular, who aren't waiting to be asked. They aren't waiting for things to be perfectly aligned. They're just running for office.

"To me, that's the exciting thing about Florida. If you're willing to get out there and hustle, you can make an enormous difference. Anna is kind of the poster child for what can happen in a state like Florida if you're willing to put in the work and do the kind of grassroots organizing that it takes."

Richards' own work is now taking place on a national scale. In the ending pages of her book, she imagines a women's political party, supporting and grooming candidates who concentrate on issues that directly affect women and families.

"It’s my dream," she admits. "Women are now the vast majority of voters. I think in this last election, we were 54 percent of the electorate. Women are absolutely fueling all the activism we're seeing, whether it's marching, whether it's calling Congress on issues, whether it's volunteering on campaigns. One of the most stunning statistics I have found is that in this last election, women contributed $100 million more than they had two years ago when Hillary Clinton ran for president. So in every aspect — as voters, as candidates, as donors, as activists — women are the most powerful force in this country."

But politics hasn't caught up to that reality. Issues such as women's health, childcare, equal pay, and sexual harassment, ones that are "at the forefront of women's concern and consciousness right now... seem to be absent in any kind of political debate," she says. Richards — along with what she describes as "a group of women, a multiracial, multigenerational effort" — aims to rectify that disconnect.

"It won't be a women's political party, but the idea is to ensure that women in this country are registered to vote, that they do vote, and that their issues are actually part of the conversation, both in this presidential election and any other election that's happening in 2020," she says. The initiative will roll out in April.

In the meantime, Richards says, opportunities to make a difference on a local level abound. She cut her teeth working on labor campaigns for janitors and hotel employees in the '80s and says that today in Florida, there's great work to be done registering re-enfranchised voters and addressing environmental issues. But if she were a young person starting out in organizing today, she'd head straight for politics.

"This is going to be one of the most dynamic presidential electoral cycles we've ever seen," she says. "There are all kinds of opportunities if there's someone who really inspires you to go volunteer. My experience on political campaigns is that you meet people you've never met, and then you're lifelong friends because you go through all the ups and downs that are part of a political campaign. And Florida is a delegate-rich state — it's a place where there's a lot happening.

"Don't worry if you don't know what you're doing," she adds. "That's what campaigns are made for. That's how you learn."

Ultimately, Richards' answer to "What can I do?" is this: as much as you can, and whatever you want.

"Women aren’t giving up," she says. "They’re not simply tired and saying, 'There’s nothing more I can do.' They’re trying to learn more about how to be involved civically, how to influence what’s happening in this country, and how they can do it with other women. And that is really exciting."

Cecile Richards. 8 p.m. Friday, March 29, at Books & Books, 260 Aragon Ave., Coral Gables; booksandbooks.com. Tickets cost $16 and include a copy of Make Trouble.
KEEP NEW TIMES BROWARD-PALM BEACH FREE... Since we started New Times Broward-Palm Beach, it has been defined as the free, independent voice of South Florida, and we'd like to keep it that way. With local media under siege, it's more important than ever for us to rally support behind funding our local journalism. You can help by participating in our "I Support" program, allowing us to keep offering readers access to our incisive coverage of local news, food and culture with no paywalls.
Make a one-time donation today for as little as $1.

Ciara LaVelle is New Times' arts and culture editor. She earned her BS in journalism at Boston University, moved to Florida in 2004, and landed a job as a travel writer. For reasons that seemed sound at the time, she gave up her life of professional island-hopping to join New Times' staff in 2011. She left the paper in 2014 to start a family, but two years and two babies later, she returned in the hopes that someone on staff would agree to babysit. No takers yet.
Contact: Ciara LaVelle
Follow:
Facebook: Ciara LaVelle
Twitter: @ciaralavelle