West Palm Beach's famous Christmas tree, Sandi, is made out of 700 tons of sand. Photo courtesy of City of West Palm Beach
We’re going to go out on a limb and guess there will be no white Christmas in South Florida this year. There hasn’t been snow recorded here since 1977. And that was more of a trace of snow than a winter wonderland, according to the National Weather Service. But just because the palm-tree tops here never glisten and children never hear sleigh bells in the snow doesn’t mean South Florida is devoid of the holiday spirit.

We have our own traditions for the holidays — from a 700-ton Christmas tree made of sand to a 12-mile holiday boat parade — that give Christmas time in South Florida a unique vibe. Here are ten of the best of those traditions and events in sunny Broward and Palm Beach that will make your holidays merry and bright.

The Palm Beach Zoo is about to get lit. Guests can enjoy displays made up of more than one million eco-friendly lights each night and festive activities such as cookie decorating, photos with Santa, and holiday-themed animal encounters. This is Palm Beach Zoo’s first time getting in on the Zoo Lights trend that has long been a holiday tradition across the country. Hey, better late than never. 6 to 10 p.m. Friday, November 29 to Sunday, December 1 and Thursdays through Sundays, December 5 to December 29, at Palm Beach Zoo, 1301 Summit Blvd., West Palm Beach; 561-547-9453; palmbeachzoo.org. Admission is $7.95 to $9.95 for members and $12.95 to $14.95 for non-members via eventbrite.com.

The reason for the season is on display at this Broadway-style Christmas show, courtesy of First Baptist Fort Lauderdale. The 36th annual pageant will combine the story of the first Christmas with contemporary holiday song and dance numbers featuring more than 300 performers (as a heads-up, the show also includes live animals). In an effort to keep things fresh, a new circus element has been added to the award-winning stage show this year. 7:30 p.m. Thursdays and Fridays; 2 p.m. and 7:30 p.m. Saturdays; 2 p.m. Sundays from November 29 to December 15 at First Baptist Fort Lauderdale, 301 E. Broward Blvd., Fort Lauderdale; 888-952-4806. Tickets are $16 to $63 via christmastickets.com. The 57th annual Christmas on Las Olas in Fort Lauderdale invites you to go sledding on its 70-foot hill.
Photo courtesy of Las Olas Association

Believe it or not, there is sledding in South Florida. But the snow on the 70-foot-high makeshift hill at Christmas on Las Olas didn't fall from the sky — it's man-made. To borrow a line from A Christmas Story — which will be showing on an outdoor screen at this 57th annual holiday celebration — we "triple dog dare ya" to give it a try. For something a little more tame, there will also be a skating rink and holiday-themed bounce house. Or you can just take it easy and check out the many acts performing on the festival's four stages, including the Calvary Christian Academy Vocal & Instrumental Group, Fort Lauderdale Gay Men's Chorus, and American Heritage Acapella Singers. 5 to 10 p.m. Tuesday, December 3 on Las Olas Boulevard, between SE Sixth Avenue and SE 11th, Fort Lauderdale; lasolasboulevard.com. Admission is free.

Delray Beach’s Christmas tree towers roughly 100 feet, making it one of the tallest Christmas trees in the state. Is it real? No, but neither is the Santa at your local mall. The tree features 15,000 LED lights and 30,000 ornaments, and you can even walk inside of it. The lights will officially be lit with a ceremony on December 5 that includes a carousel, skating rink, mini-golf, and a visit from Santa. 5:30 to 9 p.m. Thursday, December 5 at Old School Square, 51 N. Swinton Ave., Delray Beach; 561-243-7250; 100footchristmastree.com. Admission is free. Who needs a balsam fir or white spruce when you can have a Christmas tree made out of sand? “Sandi” — located at the West Palm Beach Waterfront Great Lawn — comes in at 35-feet tall and a whopping 700 tons. And every night this most Florida of Christmas trees is accompanied by a music and light show on the quarter hour. Sandi Land will also include a nine-hole mini-golf course and photo opp stations for those all-important selfies. 6 to 10 p.m. Thursday, December 5 to Tuesday, December 31 at 100 N. Clematis St., West Palm Beach; 561-822-1515; wpb.org. Admission is free; mini-golf costs $2.50 per person Thursday through Sunday and free all other days.

For a taste of Christmas in Germany, head to Christkindlmarkt in Lake Worth.
Photo by Jennifer McDaniel

Germany does Christmas better than just about anywhere, which is why German-inspired Christmas markets have been popping up all over for a while now. The local version in Lake Worth is hosted by the American-German Club and features holiday carolers, Christmas ornament stations, gingerbread houses, and an appearance by the jolly fat man himself. Food and drink options include German favorites such as brats, potato pancakes, strudel, and, as is tradition, hot spiced wine served in souvenir mugs. 2 to 10 p.m. Saturday, December 7; 1 to 9 p.m. Sunday, December 8, at the American-German Club of the Palm Beaches, 5111 Lantana Rd., Lake Worth; 561-967-6464; americangermanclub.org. Admission is $10 at the door or $8 online via eventbrite.com); kids 12 and under get in free.

You could say this is the rock band’s busy season. Trans-Siberian Orchestra has been delivering its brand of Christmas spirit — a mix of holiday classics with guitar riffs and leather — for over two decades. The faces have changed, but the intensity remains the same. This year’s tour focuses on the band’s 1996 Christmas Eve and Other Stories album that started it all, with a few other hits from their catalog mixed in. 8 p.m. Friday, December 13, at BB&T Center, 1 Panther Pkwy., Sunrise; 954-835-7000; thebbtcenter.com. Tickets are $35.25 to $75.25 via ticketmaster.com.

There isn’t a bigger holiday event in the area than this 12-mile boat parade in South Florida, which is said to draw around a million spectators each year. The self-proclaimed “Greatest Show on H20” features private boats, showboats and mega yachts decorated with lights and Christmas decor. Some of the more prime viewing points are available via tickets or hotel and restaurant packages, but you can still score a good spot for free if you’re willing to show up early. The grand marshal for the 49th annual event is hair band rocker Bret Michaels. 6:30 p.m. Saturday, Dec. 14 from the New River to the Intracoastal Waterway in Fort Lauderdale and Lake Santa Barbara in Pompano Beach; 954-767-0686; winterfestparade.com. Admission is free but seats in the Grandstand Viewing Area are $25 to $30. 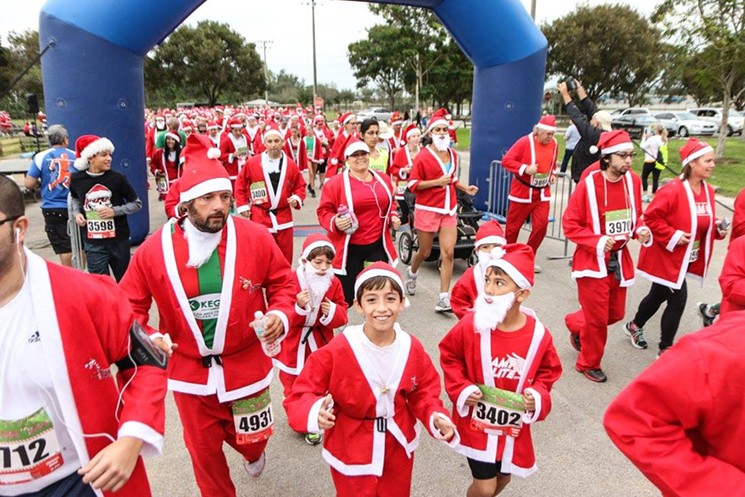 Hundreds of Santas will be hauling ass on the streets of South Florida as part of this holiday-themed run, which takes place in multiple cities, including Fort Lauderdale and Delray Beach. The race provides runners with a Santa suit and hat rather than a standard race shirt, a white beard — because why not? — and bells to tie onto their running shoes for that festive jingle effect. The little ones are invited to participate as well in the Kids Elf Dash. 7:30 a.m. Saturday, December 14 at Anchor Park, 340 South Ocean Blvd., Delray Beach, and 7:30 a.m. Sunday, December 15 at DC Alexander Park, 501 North Fort Lauderdale Beach Blvd., Fort Lauderdale; jinglebelljog.net. Registration is $40 for the 5K and $20 for the Kids Elf Dash via active.com. 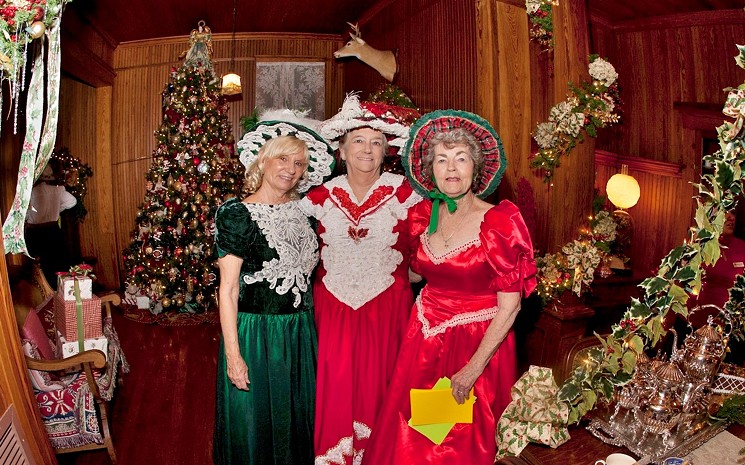 Stranahan House Museum in Fort Lauderdale is dressed in its Victorian best this December.
Photo by Clay Wieland Photography

The oldest home in Fort Lauderdale invites you to experience what Christmas was like long before The Elf on the Shelf and ugly Christmas sweater parties. Enjoy Victorian-style holiday decor and tour guides in old-fashioned Christmas attire for that old-timey feel. And because Frank Stranahan’s former residence is located on the New River, admission includes a boat tour where guests can take in Fort Lauderdale’s holiday light displays. 7 p.m. and 8:30 p.m. December 16, 19 and 22; 7 p.m. December 18 and 23 at Stranahan House Museum, 335 SE Sixth Ave., Fort Lauderdale; 954-524-4736; stranahanhouse.org. Admission is $35.
KEEP NEW TIMES BROWARD-PALM BEACH FREE... Since we started New Times Broward-Palm Beach, it has been defined as the free, independent voice of South Florida, and we'd like to keep it that way. With local media under siege, it's more important than ever for us to rally support behind funding our local journalism. You can help by participating in our "I Support" program, allowing us to keep offering readers access to our incisive coverage of local news, food and culture with no paywalls.
Make a one-time donation today for as little as $1.