After taking a break from the music industry, Eyme is ready to claim her spotlight. Photo by Karli Evans
On April 4, 1994, Aaliyah released “Back & Forth,” her debut single and the first of many hits that would lead her to become an R&B and pop music icon. With her majestic aura, confident persona, and innovative sense of style in fashion and music, she'd go on to inspire a whole generation after her.

Part of that next generation is Eyme Santos, an up-and-coming, genre-bending artist who looks to push R&B forward. Mesmerized by her graceful voice and the swagger many have tried to emulate, a young Santos saw Aaliyah as more than merely a musical inspiration. She saw a figure who embodied empowerment and confidence as a Black woman.

“I think 'Try Again' was one of the main songs that really touched me. It’s just something about her in that video, the level of confidence and classiness. It was just something I haven’t seen in other artists before, you know?” Santos says. “It’s like a way of being confident and sexy without putting it all in your face. I got a lot of strength through her.”

Over a glitchy Zoom call, a surprisingly patient Santos looks and sounds filled with excitement and eagerness. Dressed casually on a gloomy Monday morning, she wears her hair draped down past her shoulders, coated into a calming blue shade that harmonizes with her radiant brown skin.

The 33-year-old artist, who releases music mononymously as Eyme (pronounced like Amy), has grown into a woman who knows exactly who she is and what she wants. Her latest offering, “Busy,” is a hazy and pulsating record, replete with the essence of the late '90s R&B soundscape. Santos is polished and shows her true strengths through her ability to maintain and maneuver her vocals behind lush keyboards and triumphantly jazzy horns.

But for the veteran artist, it has been a long journey to this point.

“Busy” serves as a reintroduction. Santos wiped the majority of her old music off the deep ruins of the internet. You can still find a few covers on YouTube that she did about a decade ago, and with a bit more digging, you might stumble across her somewhat secretive EP, Nights in the 305.

Growing up in Quebec, Santos was born to a Haitian father and Dominican mother.

“In my household, we speak Spanish, English, French, and Creole,” she says casually. “On top of that, my sister also speaks Portuguese.” 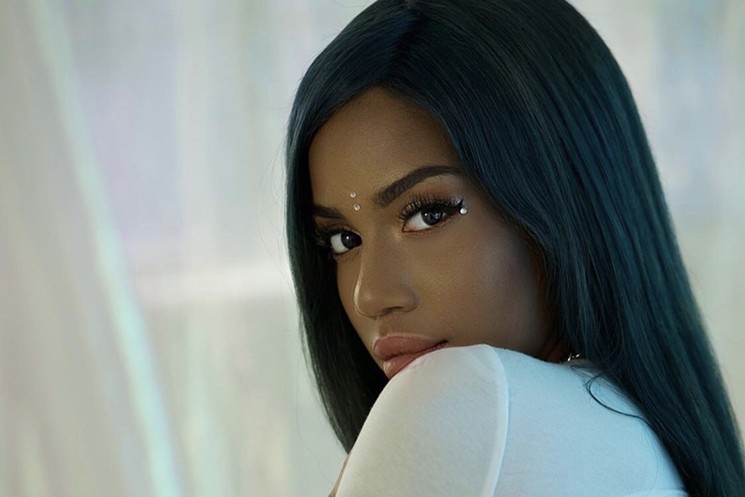 Photo by Karli Evans
While Santos was in fifth grade, her parents decided to move to a predominantly white neighborhood. Being both the new kid in school and one of the very few Black kids around, she was bullied. She found her escape in music.

“It was such a shocker to lose all my friends and be in a new environment. So, the first day of class, I had music, and I really connected to the piano,” she explains. “From that day on, I would come home every day after school from being bullied, and I would go learn a new song or write a new song. It all started from there.”

When she was 14, Santos' father, who works in the medical field, got a new job that brought the family to Miami. The relocation was a culture shock for the budding artist, who spoke no English.

“Having my teacher laugh at me was a lot for me,” she says. “When I first moved here, I used to be like, 'Bonjour, excuse me. Can you point me to the bathroom?'"

Santos' family settled in Liberty City, home to legendary acts such as Uncle Luke, Trina, and Trick Daddy. Amazed by the cultural differences, she embraced Miami's vibrancy and soaked everything in.

“It was the first time I ever saw gold teeth in somebody’s mouth,” she says amusedly. “Naw, for real, I walked up to the dude and was like, 'Yo, you’re amazing, you must be somebody special. What is this in your mouth? Like, this is amazing.'"

"You have to really know what defines your craft and sound because if you do, you’re only going to put yourself in the position to win."

In Miami, Santos found herself surrounded by Black and brown kids who looked like her and dove deeper into American music. She also started developing her artistry. Before attempting to go solo, she was part of 2 Squar’d, a girl group that appeared on The X Factor in 2011. While the national TV appearance was a nerve-wracking experience for her, it pushed her to continue chasing her dreams.

“I remember that was the first time I realized that it's possible for the human body to not produce saliva,” she says.

Although the group eventually split up, Santos looks back at the experience fondly.

She also gained knowledge and compliments from her guest mentor on the show, Pharrell Williams.

“One thing I learned from Pharrell was not to be afraid to speak up," Santos says. "We were purposely given songs that they knew were not going to match our style to see if anyone would speak up, but no one spoke up. I felt in my spirit that it wasn't it, but I was going to respect my teammates, and we’re going to go for it and make it happen. But till that day, I learned that in the industry, you have to know who you are, know what you stand for. You have to really know what defines your craft and sound because if you do, you’re only going to put yourself in the position to win."
Her time with 2 Squar’d also taught Santos studio etiquette, how to build harmonies, and other skills she still uses to this day.

Still, the challenges of being in the music industry — dealing with con men, the pressure to compromise one's integrity, abusive relationships — led her to take a break. She says it was her faith that kept her in the trenches of the industry and protected her sanity.

“Honestly, I think it was God, because sometimes you want to give up, but something magical just happens,” she says.

During her hiatus, she decided to erase her work up until that point. At the same time, she took the time to hone her skills and assemble a team to help make her vision a reality.

It was, in short, a rebirth.

Santos says the music video for “Busy” wouldn't have come to fruition without the creative vision of Karli Evans and Lamont Howard.

Evans, a Miami-based filmmaker, photographer, and creative director (and a former New Times photographer and page designer), has been instrumental in helping Santos recraft her image.

“It’s been the most magical ride ever since. We came together like glue," Santos says. "[Evans] broke down my ideas in every scene that you see in that video. Between her and Lamont, there’s a synergy within the group."

From image consulting to creating logos, Lamont has been another crucial component in rebuilding the Haitian-Dominican artist.

While the video is an eye-pleaser with its captivating stray lights and sensual scenery, the team wanted to focus on the themes of Afrofuturism and escapism. Those themes will be revisited on Eyme's upcoming album, Daze, set for release later this year. (Afrofuturism, coined by Mark Dery in 1993, denotes the aesthetic that melds together elements of science fiction and fantasy to explore the African-American experience.)

“I like to say who can tell our story better than ourselves,” Lamont says. “We are the people who should be telling our narratives. Afrofuturism is based on the idea that Black people or the African diaspora see themselves as victors, seeing themselves lead the narratives in science fiction."

“They were my main inspirations: the TLCs, your Aaliyahs, and what Janet Jackson was doing at that time," she says. “It's a revival of the variety in sound that existed at that time. I want to excite people to try different sounds and be their true authentic self.”
KEEP NEW TIMES BROWARD-PALM BEACH FREE... Since we started New Times Broward-Palm Beach, it has been defined as the free, independent voice of South Florida, and we'd like to keep it that way. With local media under siege, it's more important than ever for us to rally support behind funding our local journalism. You can help by participating in our "I Support" program, allowing us to keep offering readers access to our incisive coverage of local news, food and culture with no paywalls.
Make a one-time donation today for as little as $1.