Seth Troxler's new Twitch channel, Dream Access TV, is a venue for dance-music artists to express themselves in different ways. Photo courtesy of Dream Access TV
Seth Troxler isn’t an entertainer; he’s an artist. Decades from now, his legacy won’t be measured in likes and followers. His legacy will exist as moments in time. Every new idea represents his interpretation of society at the time of creation, and his latest interpretation of society exists as Dream Access TV, his new channel on Twitch.

Like every other touring DJ on the planet, the last 14 months were a drastic shift for Troxler. Until very recently, when he began gigging again (including a 14-hour set with Dubfire at Club Space back in April), he was experiencing life in a new way. After 15 years as a self-described road dog, he was thinking about his own career, and also how he can best serve his audience moving forward.

“The biggest thing about DJ'ing is the communication between the crowd and the DJ,” Troxler tells New Times.

When Troxler says “communication,” he doesn’t mean talking throughout his sets or taking requests. The crowd communicates energetically, and the DJ responds with music. He wanted to expand upon that idea.

“I wanted to look at some different ways how people in electronic music could communicate,” he says.

Through Twitch, Troxler saw the potential to create a community of people connected by more than a love of the dance floor.

That’s where Dream Access TV comes in: Troxler and his kooky comrades are building communities around anything they want.

“I think Twitch is the Wild West of broadcasting. There are no rules,” he says. “With Dream Access TV, I wanted to open a dialogue between artists and their communities.”

Sock puppets get screen time during The Matthew Dear Show.
Photo courtesy of Dream Access TV
Those familiar with Troxler’s music can tell he has become accustomed to creating in an environment with no rules. For Lost Souls of Saturn, his new “art project,” he and Phill Moffa put avant-garde jazz, ambient textures, classic movie samples, and minimal techno into an air fryer for an eccentric sonic amalgamation.

What solidifies these zany, outlandish creative offerings into the fabric of Troxler’s lifelong body of work are reference points.

“All these moments of mine where people think I’m out there and crazy are always small reference points,” Troxler explains. “If someone wanted to go really micro into the whole situation, they could find a wormhole to different ideas.”

The central reference point of Dream Access TV is the public-access TV era of the 1980s and '90s. Troxler grew up watching public access in his home state of Michigan, where anyone from the area could come on and produce a show. One show he remembers featured a high schooler interviewing his classmates.

“They were horrible in a way but also somewhat comforting,” he says. “TV that’s just interesting enough where you can put it on and feel like you’re doing something without doing anything.”

MTV after dark. Weird Al’s UHF. Shows with low-production quality and grainy screens where everyday people do bizarre stuff. With Dream Access TV, Troxler wants to bring back that level of authenticity — and perhaps amateurism. It's a stark contrast to the current trend of looking perfect through the lens of social media.

“Let’s not try to make stars. Let’s allow real artists to use it as a reflection of society,” he remarks. “I want to bring back the weirdo.”

Troxler gives Dream Access contributors free rein over what they wanted to produce, and the programming artists like Eats Everything and Matthew Dear have created so far definitely qualifies as "weird."

Matthew Dear — one Troxler’s most desired candidates for the channel — started the plainly titled The Matthew Dear Show, which so far has included everything from old jazzercise clips to sock puppet theater to interviews with his goats.

Coming soon is a show called DJ Mukbang. (Mukbang is a style of broadcast originating from Korea wherein the host eats exorbitant amounts of food on camera.) On Dream Access TV, Eats Everything will narrate as fellow DJs dive into whatever culinary endeavor lies before them. 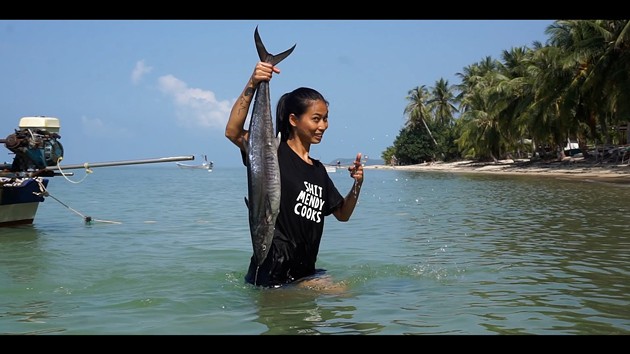 Shit Mendy Cooks dives into the cultural cuisine of Mendy Indigo’s native Thailand.
Photo courtesy of Dream Access TV
During DJ TooFine’s — AKA ABrotherNamedSherm — Old School Hip-Hop Show, the producer took a break from his DJ set of rap classics to overdub insects on a storm drain looking for the party.

“So many real artists are artists in many different facets,” Troxler says. “For people who express themselves as artists, it’s always great to find a new medium to express their art, and with Twitch, it’s given us this new medium.”

Troxler includes himself in that category of artist, and fans of his have seen far more than an idiosyncratic weirdo in the media. They’ve also seen a composed public speaker with complex opinions appearing on respected outlets such as BBC News.

“All the things I wanted to put on the network are a reflection of myself,” Troxler says — and Dream Access TV includes several shows that demonstrate the more refined and educated sides of him.

Shit Mendy Cooks, despite its profane title, dives into the cultural cuisine of Mendy Indigo’s native Thailand. On a recent broadcast, she picked clams straight out of the sand before tossing them in a pot.

Community Bread and The Misery Index are the discussion staples of Dream Access TV where every topic is fair game.

In truth, everything is fair game on Dream Access TV. Even in its short life so far, the channel has presented programming that’s appeased Troxler’s affinity for public-access TV and pushed the limits of how dance-music culture exists on Twitch — at least how it exists at this moment in time.

“[Dream Access TV] is one of the best creative endeavors I’ve ever been part of. Everyone who’s seen it says it’s the best,” Troxler says. “Some kids who are in their twenties when they’re nearly 40 will say, ‘Do you remember Dream Access TV? That was a weird moment in time.’”
KEEP NEW TIMES BROWARD-PALM BEACH FREE... Since we started New Times Broward-Palm Beach, it has been defined as the free, independent voice of South Florida, and we'd like to keep it that way. With local media under siege, it's more important than ever for us to rally support behind funding our local journalism. You can help by participating in our "I Support" program, allowing us to keep offering readers access to our incisive coverage of local news, food and culture with no paywalls.
Make a one-time donation today for as little as $1.