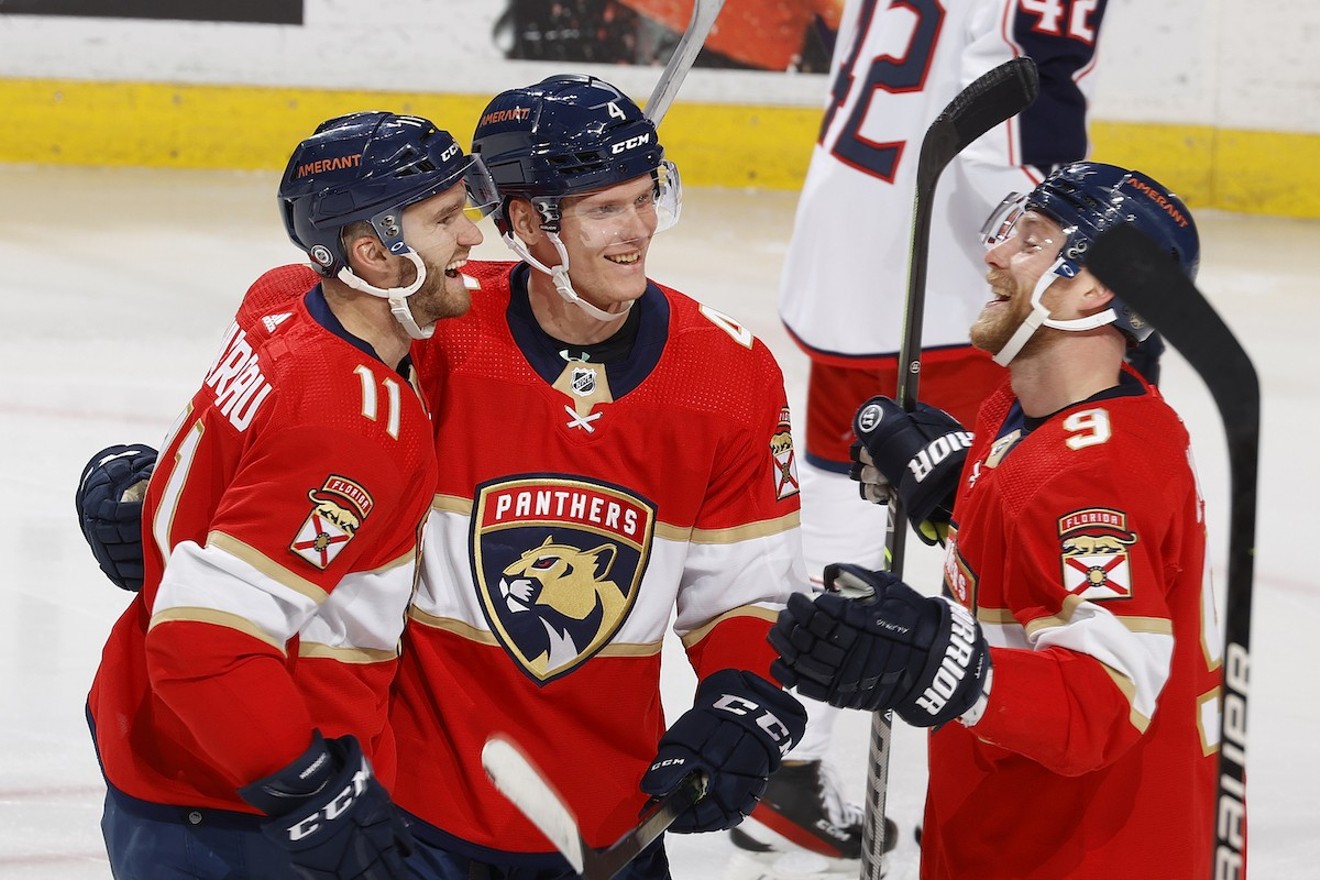 In the heart of the Cats' most magical season to date, fans have heard the peppy emo-ness that is "Sweetness" by Jimmy Eat World dozens upon dozens upon dozens of times at FLA Live Arena. As hot as the Panthers are running, its hook might be blared up to nine times during a given home game.

While the scoring sprees have been euphoric, the song for the moment increasingly fails — particularly when you look around the NHL and see the Dallas Stars with their very own Pantera song, the Chicago Blackhawks rocking out to "Chelsea Dagger" by the Fratellis, and...well, the list goes on and on.

It's time fans heard something else, something that actually builds fan momentum off Jonathan Huberdeau's insane wizardry and Anthony DuClair's power drives to the net. Something fans can sing along to. (What is Jimmy Eat World singing in that blared chorus, anyway?) Something that has an ounce of meaning to the fanbase.

Perhaps this tweak can make FLA Live Arena that much more challenging of a spot to play, and maybe — just maybe — help the Cats carry home their first playoff series win since 1996. Or, dare we say it, a Stanley Cup.

Let it be known, all this is coming from a Panthers fan who loves Jimmy Eat World, who has seen the Arizona-bred band live six times, and who had to tame major giddiness ahead of interviewing them in 2007.

The bottom line is this: regardless of how sweet "Sweetness" may be to you, the song does not fit the Panthers.

Steve Elario, who many say looks like Ric Flair and may be periodically seen "Woo!"-ing up a storm on the Jumbotron, finds "Sweetness" so unmemorable that he says, "To be honest, I have not heard it come on."

Matt Fagan, a Panthers season-ticket holder since 1999 who's known as the cape-and-shades-wearing "Superfan," says "Sweetness" ranks "dead [expletive] last" in terms of the Panthers goal songs he has endured over the years. (As a quick history refresher, the Panthers' goal songs since the team's 1993 arrival include Gary Glitter's "Rock and Roll Part 2" and Kernkraft 400's "Zombie Nation," among other generic jams you'd likely hear at any other sporting event.)

As for "Sweetness," Fagan adds, "No, I don't think anyone feels it. No one sings along. Most people just cheer and scream, 'Woo!'"

Pundits tend to agree with these two Panthers diehards.

In a 2021 ranking of NHL teams' goal songs, Sporting News ranked "Sweetness" dead last, saying it "doesn't really instill much energy or enthusiasm, instead just sounding like any other song you'd hear throughout the course of a live game. It also doesn't have easily-chanted lyrics." 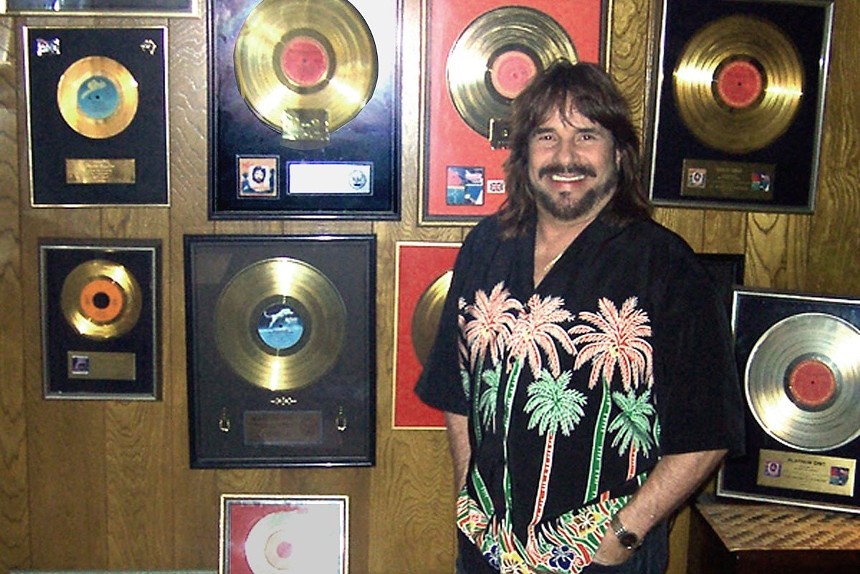 What's the solution? In 2022, it's oh-so-easy to whine, whine, and whine some more about the things we don't like, without offering anything thoughtful. And, in the case of music, there are different ears on different peers.

That said, there's a totally under-the-radar gem that was made to be the Panthers' goal song, period.

That song is "Florida," by Bertie Higgins — specifically, its chorus-filled homestretch.

Before Googling this delightful, classic song that may now be a staple of your next commute/barbecue/beach outing, know that Higgins is a Tarpon Springs native who has dedicated his entire life to sharing Florida-centric, trop-rock tunes with the world. You may know the Higgins name from his classic single, "Key Largo," which hit number one in 1982 on Billboard's Adult Contemporary chart — or his international smash, "Casablanca," which keeps Higgins touring Pacific Rim countries to this day.

In 2019, he was inducted into the Florida Music Hall of Fame — an honor also bestowed upon Tom Petty, Jimmy Buffett, and Julio Iglesias (among others). He was even knighted, in 2016.

Back to "Florida": It's a Sunshine State love letter, delivered from the perspective of someone who's freezing up north. "You're my fountain of youth/You're my old Key West/The brightest of blue in my treasure chest/The flower that blooms the loveliest in Florida." And, "Dreams of golden days tanning in the sun/Where the dollars you raise are the sandy ones/You're making waves and just having fun."

Of the song — which, fun fact, appears in the Kristen Wiig instant classic Barb and Star Go to Vista Del Mar — Higgins tells New Times, "I wrote that one on my own. I've spent a lot of time on the road, including some miserable winters in New York. It's really self-explanatory. For the Panthers, I think they could really use that hook."

That hook and chorus couldn't be more perfect. As a bonus, the ideal spacing for the Panthers' signature growl is built in. With lyrics as simple as "Florrrrrrida!/Florrrrrrida!/Going back to the peninsula/Florida!" it's authentically and undeniably symbolic of our region, totally chantable, and could easily have fans singing well beyond a post-goal faceoff.

Experience it yourself. And you're welcome.


We are in the @FlaPanthers’ most magical season yet. It is time for a goal song that’s a better fit (sorry and still love you Jimmy Eat World / “Sweetness”). What we need… that no one sees coming is… “Florida” by Bertie Higgins! Do you dig it? #FloridaForFlorida #TimeToHunt pic.twitter.com/mjPcPQf49X

As for a prospective change in goal song, the Florida Panthers tell New Times in a statement, "We love to hear our fans' feedback, including the goal song. We appreciate the support and passion our Panthers fans bring to games."

Amid so much excitement our beloved Panthers are generating on the ice this year, imagine how much more could be sparked with a better song in the game's biggest moments.
KEEP NEW TIMES BROWARD-PALM BEACH FREE... Since we started New Times Broward-Palm Beach, it has been defined as the free, independent voice of South Florida, and we'd like to keep it that way. With local media under siege, it's more important than ever for us to rally support behind funding our local journalism. You can help by participating in our "I Support" program, allowing us to keep offering readers access to our incisive coverage of local news, food and culture with no paywalls.
Make a one-time donation today for as little as $1.