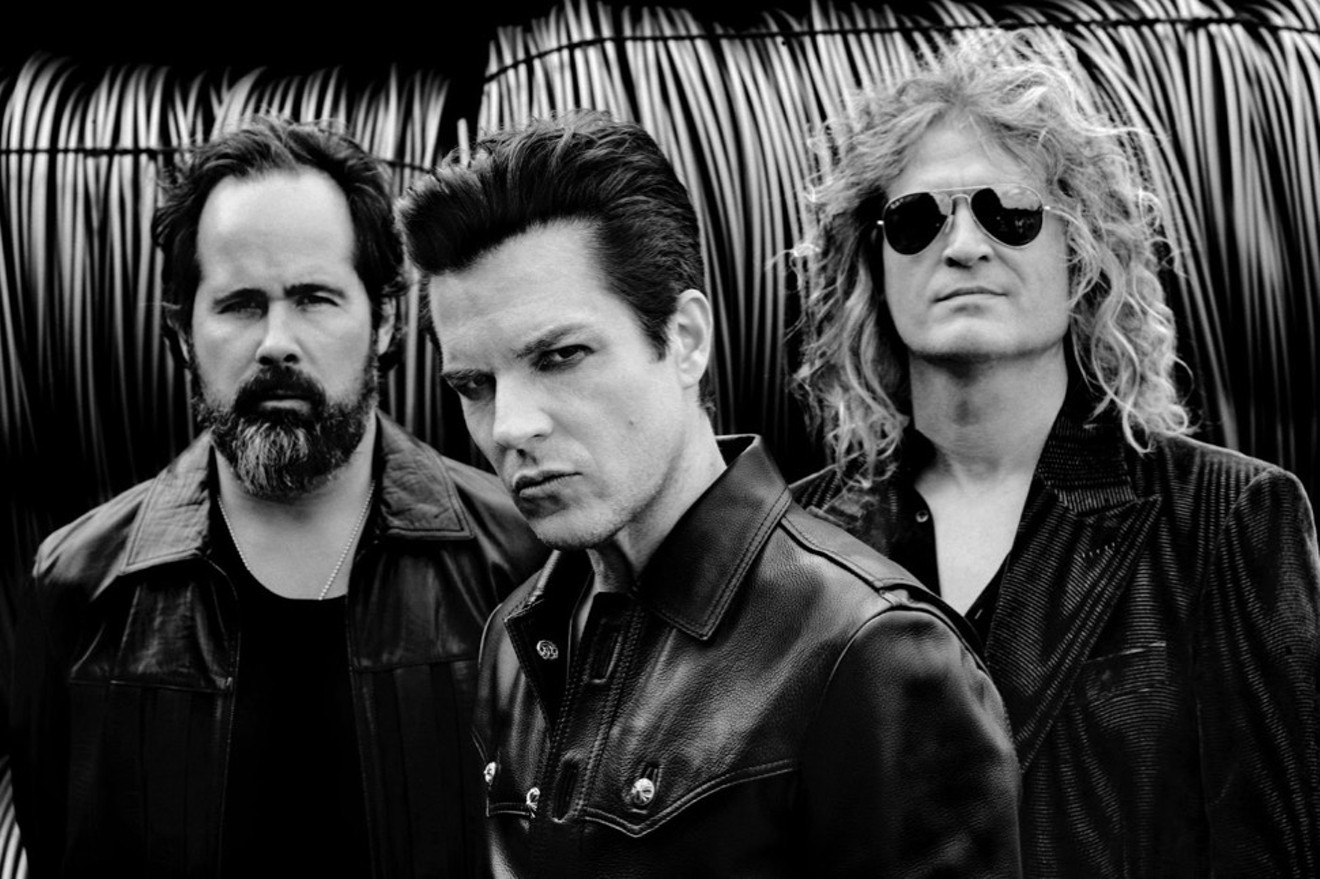 The Killers Photo by Anton Corbijn
Everyone remembers their first Killers song. Whether you're a parent who heard "Human" on the radio while driving the kids to school circa 2008, a millennial who watched them perform on season two, episode four of The O.C., or a younger zillennial that recently learned about "Mr. Brightside" due to the song's reappraisal, odds are you've heard the band's music before — regardless of your level of familiarity with the rest of the band's work.

One of the 21st century's biggest rock acts, the Killers' list of accomplishments since their formation in 2001 includes seven Grammy nominations, 28 million record sales worldwide, and an expansive array of genres covered, from post-punk to Americana. Also under their belts are 11 entries on the Billboard Hot 100 chart — the official metric by which sales, streams, downloads, and airplay are measured in the U.S. to track songs' popularity on a weekly basis.

It's easy to see why the band remains so successful in today's pop-dominated landscape. Few acts successfully commit themselves to a single theme over multiple decades. From early hits like 2005's "Smile Like You Mean It" to the music of their most recent album, Pressure Machine, the Killers have chosen a universal one: yearning. Reminiscing about things like childhood memories, ended relationships, and any life-altering incident where the wrong choice was made forms the sentiment behind much of their most lauded work.

Ahead of the band's FTX Arena tour stop on Tuesday, September 13, New Times decided to look back to the band's days of shoulder pads and eyeliner to generate a sampler of what's made the Killers so popular over the years. Here are the band's 11 greatest hits ranked from worst to best.

Leave it to the Killers to make Christmas music sound epic — even if the result is so saccharine, it might just leave you with a toothache. ("Smile below each nose and above each chin.") With every famous musician having a holiday record, celebrity covers of Christmas tunes are so common that there's little room for novelty at this point. Why else would Mariah Carey's "All I Want For Christmas" be so enduring? It's a classic now because we hadn't heard it prior to release.

Penned by the Killers and frontman Brandon Flowers respectively, 2006's "A Great Big Sled" and 2010's "Boots" may not have the staying power of that song, but they're still cute, original tunes that do a good job of evoking childhood nostalgia. The latter is undoubtedly the better of the two, even if it feels wrong to separate them given their unique standing among the band's other hits: Both were made as part of Bono's annual Red campaign for funding AIDS charities. Neither song charted very high, but both made it on the Billboard Hot 100 in their respective years, with "A Great Big Sled" taking the 54th spot and "Boots" peaking at 79.

By virtue of being a cover (of a Joy Division song, no less), "Shadowplay" (2007) isn't as groundbreaking as either band's best work, but it gets points for doing its own thing instead of trying to match the energy of the OG. And it's not half bad. The song stands on its own merits, even if it's hard to imagine anyone preferring the polish of the Killers' electronic-rock cover to the inky atmosphere of Joy Division's gothic-punk track.

Recorded as part of the soundtrack for the English rock band's 2007 biopic Control,  the Killers' iteration of "Shadowplay" peaked at 68 on the Billboard chart.

The trouble with ranking a band's catalogue as consistent as this one is that some perfectly listenable tunes are bound to make the lower tier of this list. "Runaways" isn't bad, but it's also not particularly original. Everything from the melody to band member Dave Keuning's iconic guitar riffs recalls the band's previous work that improved the formula.

Still, there's a comfort to the familiarity of songs like this, and "Runaways" landed at number 78 on the Billboard Hot 100. Flowers does a lot of the heavy lifting, his shaky vocals adding to the poignancy of this tune about the naivete of young love.

Flowers sounds wise beyond his years on "When You Were Young," a cautionary tale about a young woman who gets taken advantage of by her older partner. The band's foray into heartland rock makes it a fun listen alongside its most recent album, the somber and sobering Pressure Machine, which takes a similar narrative approach and fully commits to a roots-influenced sound palette.

After "Mr. Brightside" and "Somebody Told Me," "When We Were Young" is the Killers' most successful single, peaking at number 14 on the Billboard Hot 100. It also earned two Grammy nominations for "Best Rock Song" and "Best Music Video" in 2006.

"Spaceman" is an excellent Killers song that has the downside of sounding like many other Killers songs — but like "Runaways," it's also a bop that is hard to skip if it comes up on Spotify. The cryptic metaphors in this alternative rock cut from the band's 2008 album, Day & Age, have given way to various interpretations. The most popular theory is that it's about a suicide attempt, with the narrator walking the listener through their hospitalization and recovery.

"Spaceman" didn't chart high upon release, but it still made the Hot 100 chart, peaking at number 67. The song and music video remain classics in the Killers' discography for fans who've been listening since the band's early days.

The Killers' sophomore record, 2006's polished, Springsteen-esque Sam's Town, may have received mixed reviews upon release, but one thing everyone seems to agree on is the greatness of its third single. Most notably, Rolling Stone panned the album (which has since been re-evaluated as a 2000s classic) but named "Read My Mind" one of the best songs of its year.

"Read My Mind" is one of a few examples of the band's knack for anthemic tunes made for the arena, and it does that thing the Killers do so well, where the song starts relatively mellow before swelling into an instrumental explosion. As far as rock music this century goes, it was a hit for mainstream audiences, peaking at 62 on the charts in 2007.

If you were an emo teen during the noughties, chances are you rocked out to this song in your youth. "Somebody Told Me" was the band's first single on the Hot 100 chart, peaking at number 51 and earning the Killers their first Grammy nomination. (The album, Hot Fuss, also was nominated that year.) It's certainly not "Mr. Brightside," but it gets the job done as a guitar-heavy, post-punk banger soaked in enough teenage angst to become a hit with young audiences.

"This song really brought out the band's strengths at that time. I was 20, 21, and just trying to write about what I was doing and seeing in these indie nightclubs in Vegas," Flowers told NME in 2013.

While its perplexing lyrics are not anomalous in the Killers' discography, the song has been interpreted to be about various things, from courtship to the creative process of songwriting.

"Are we human/Or are we dancer?" Flowers first asked listeners around the world in 2008. "Don't you mean denser?" the world asked in return. It didn't matter. The first single off the band's third LP, Day & Age, may not make grammatical sense, but its existential sentiments and nonconformist attitude still resonate today.

To his credit, Flowers has defended the infamous lyric along with the song's dance beat, which references the legendary journalist Hunter S. Thompson's claim that America is "raising a generation of dancers, afraid to take one step out of line."

"It's supposed to be a dance song, it goes with the chorus," he told Rolling Stone in 2008. "If you can't put that together, you're an idiot. I just don't get why there's a confusion about it."

Most importantly, however, this alternative rock cut is a bop and a half. Produced by electronic musician Stuart Price and inspired by the new wave sound of the 1980s, it became a hit with audiences, who got it to peak at number 34 on the Hot 100 and made it the most globally streamed song on Spotify in 2008.

I'm tempted to call "All These Things That I've Done" one of my favorite Killers songs — though that superlative has a habit of changing depending on whichever one I'm listening to at the moment. This alt-rock jam has it all: good old-fashioned guitar riffs, a sampled gospel choir, and an extended refrain you can't get out of your head after the first listen.

Flowers wrote the band's third Grammy-nominated single about Matt Pinfield, a TV personality and friend of the group's who worked for a program that mentored wounded and mentally distraught soldiers. Thanks to the nuanced subject matter and Flowers' mature vocals, the original recording sounds like someone much older reminiscing behind the mic — which makes it all the more surprising that the artist was only 23 years old when it dropped.

The song peaked at 74 on the Billboard Hot 100 in 2005, but it deserved to go much higher. A banger tinged with the kind of anxious melancholy encapsulates the band's entire ethos. You could say it accidentally foreshadowed the Killers' forthcoming body of work upon its release in 2004.

Were you expecting a different number one? Emo music's seen something of a re-emergence as of late, with Panic! At the Disco and My Chemical Romance set to tour in South Florida later this month. Still, for my money, nothing beats this new-wave anthem about the anxiety of being cheated on.

"Mr. Brightside" was the band's first single ever and its highest charting one to date. Written by Flowers and Keuning, the song was initially released in 2003 but then re-released in 2004, where it surged in popularity, peaking at number ten in both the U.S. and the U.K.

Perhaps this bitter breakup banger was so effective because, for Flowers, it came from a real place.

"I was asleep and I knew something was wrong," he told Q magazine in 2009. "I have these instincts. I went to the Crown and Anchor [bar], and my girlfriend was there with another guy."

The hype is justified. As Sadie Bell of Thrillist put it, "Part of the song's joy is embracing the vaudevillian, the-pain-is-simply-too-unbearable drama of the lyrics, and its equally compelling video." Whether you treasure it as an early-2000s relic that refuses to age or simply enjoy the memes this song has given us over the years, there's no denying its standing as a modern classic.
KEEP NEW TIMES BROWARD-PALM BEACH FREE... Since we started New Times Broward-Palm Beach, it has been defined as the free, independent voice of South Florida, and we'd like to keep it that way. With local media under siege, it's more important than ever for us to rally support behind funding our local journalism. You can help by participating in our "I Support" program, allowing us to keep offering readers access to our incisive coverage of local news, food and culture with no paywalls.
Make a one-time donation today for as little as $1.