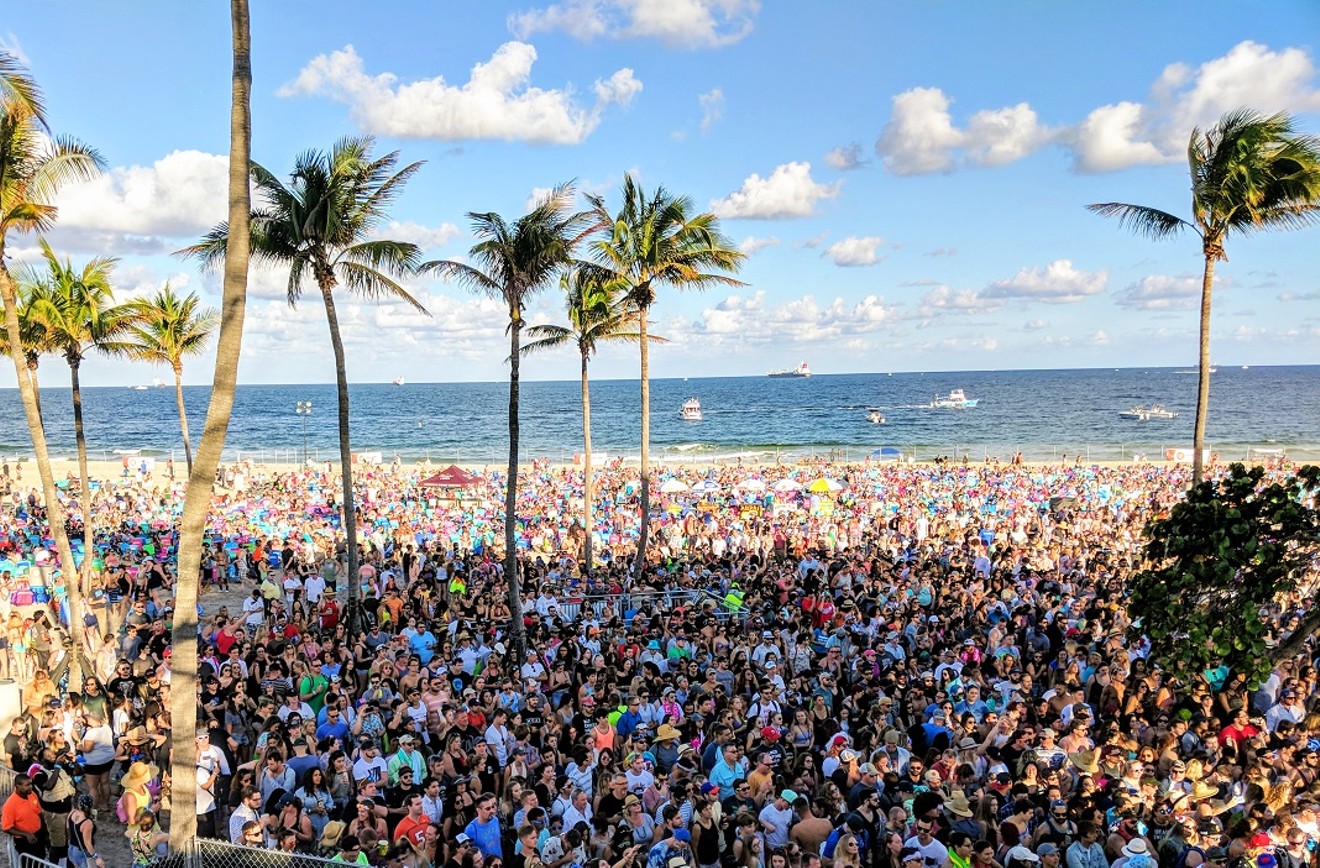 Riptide Music Festival expands to three days this year. Courtesy Riptide Music Festival
Riptide Music Festival marks its third consecutive year on Fort Lauderdale Beach this weekend, and it's back with a vengeance. Rooted in its mission to bring together classic hits and alternative beats, the annual music extravaganza attracted more than 37,000 music lovers in 2017, doubling ticket sales from its inaugural premiere. This year's festival should surpass those figures due to a lineup including more than 30 bands and legendary headliners like The Jacksons, Panic! At The Disco and Third Eye Blind. Building on its past success, the festival will also expand into a three-day event.

In preparation for the electrifying weekend ahead, we narrowed down the blazing hot performers and handpicked the top five acts to look out for. Here are the best performances you'll see at Riptide Music Festival.

Tito Jackson of the Jacksons
Photo by Taj Jackson
The Jacksons. Friday, November 30. The headlining act at this year's Riptide Music Festival (and justifiably so) is one of music's most monumentally revered vocal groups. That's due in large part to the band's ties to one of the most famous singers of all time. And while The Jacksons are not the same without MJ, they're still very worthy of the accolades they've continued to garner over the span of decades.

Formerly known as The Jackson 5, the American pop band has sold more than 100 million records worldwide. Rock and Roll Hall of Fame and the Vocal Group Hall of Fame honoree, the group renamed itself as The Jacksons in 1975 due to record label demands.

Currently comprised of Tito, Jackie, Marion and Jermaine Jackson, past members of the band included Randy and The King of Pop himself, Michael Jackson. Hits like “I Want You Back” and “ABC” remain among their most beloved tracks, reminiscent of the early decades Michael first crooned before moonwalking his way to solo success.

Brendon Urie of Panic! at the Disco
Photo by Jimmy Fontaine
Panic! At The Disco. Saturday, December 1. Lead singer and officially the sole member of Panic! At The Disco, Brendan Urie's leading a semi-charmed life as the heart and soul of the mid-aughts, pop-oriented rock band. The vocalist first saw roaring success in 2005 when he and his former bandmates were fresh out of , and despite band members' departures over the years, Urie has been successful in steadily maintaining his own fame.


From molding electronic dance punk with chaotic entertainment scores on its initial album to Broadway influences on the latest, one secret to Panic's allure is the consistency to be inconsistent. With every album released over the last 14 years, Panic! At The Disco has proven to fans that they should always "expect-the-unexpected."
311. Sunday, December 2. There are heaps of reasons to stan this American rock band, least of which is a name that originates from a Nebraska police code used for one streaking guitarist. Veterans by every right, the five bandmates in the group play to a following of millions who tune in to hear their funky, heavy sound. 12 studio albums, two live albums, four compilations and EPs, and four DVDs later, 311 are still going strong more than a quarter century after it all began.

After 32 years of championing independent, original vibes, the guys are barreling full-force ahead. Album number 13 is underway and the band expects to release it in the spring of 2019. They may even release it on 311 Day — which is, for all intents and purposes, their unofficial, self-designated holiday. Every March 11, the gang play an extended concert for fans since the holiday's conception in 2000. From 47 songs to a tracklist of 86, these elongated performances have slowly grown throughout the years.
Third Eye Blind. Sunday, December 2. Is it truly possible not to love a band behind some of the most timeless hits of the '90s? Think back to those days of shout-singing the lyrics to "Jumper" or "Semi-Charmed Life" surrounded by a swell of others who knew every word alongside you. Consisting of Stephan Jenkins, Brad Hargreaves, Kryz Reid, Alex Kopp Alex LeCavalier, the band responsible for the soundtrack to millennial adolescence are a surefire delight to experience in person.

Blurring the boundaries between musical escape and reality, a Third Eye Blind concert once offered an unlikely addition: piñatas filled with candy (and, sometimes, live crickets) framing moshpits. These days, the experience is tamer, but the award-winning party of five produces the same gumption they did at the crux of their fame.

Matt and Kim
Photo by Mathew Tucciarone
Matt and Kim. Sunday, December 2. It's definitely not only about rock at Riptide. Electronic indie-duo Matt Johnson and Kim Schifino slay it big-time both onstage and off. Art students turned lovers turned musicians, they shrug off the series of events leading up to their breakout 2009 hit, "Daylight," as almost accidental. Ironic, as the single solidified a large fanbase and defined a peppy, eccentric and charged style.

A staple of their appeal is a charismatic aura that accentuates both the positive tunes and the darker tones of their latest album. In an interview with NPR a few months back, Johnson opened up about the motive behind Almost . "I do think we made a much more personal and real album," he said, attributing the revamped, less cheery effects as a direct result of "...everything that happened last year, politically."

Although their bubbly exuberance has been replaced with a more soulful, sincere tempo, the partners are even more skilled at a crowd. Energy is everything, and Matt and Kim are famous for bringing it.
KEEP NEW TIMES BROWARD-PALM BEACH FREE... Since we started New Times Broward-Palm Beach, it has been defined as the free, independent voice of South Florida, and we'd like to keep it that way. With local media under siege, it's more important than ever for us to rally support behind funding our local journalism. You can help by participating in our "I Support" program, allowing us to keep offering readers access to our incisive coverage of local news, food and culture with no paywalls.
Make a one-time donation today for as little as $1.
Ayurella Horn-Muller is a South Florida native, Florida State University alumna, and freelance journalist. She covers arts, culture, and music for Miami New Times and news for New Times Broward-Palm Beach. You can also catch her work in Forbes, Elite Daily, Film Threat, Elephant Journal, and Face the Current.
Contact: Ayurella Horn-Muller
Follow:
Twitter: @ayurellahm