Hawkins, a former prosecutor, was appointed to the family division by Gov. Rick Scott in November. However, since early June, the FJQC has been investigating a complaint filed against her. While the probe continued, Hawkins was reassigned to the foreclosure division. The FJQC concluded its investigation July 18.

"At the July 12, 2019 hearing, the Investigative Panel of the Commission took testimony from the judge, reviewed affidavits and other evidence, and determined that probable cause exists to believe that Judge Hawkins violated the Code of Judicial Conduct," the recommendation says. "The panel also determined that the commission should recommend Judge Hawkins be immediately suspended without compensation, pending final disposition of this matter."

According to the FJQC recommendation, which was reported by Broward Beat and JAABlog, on June 11, Judge Hawkins was seen on a security camera grabbing a court employee by the neck after she was told her afternoon docket was not ready.

Despite seeing the video footage herself, Judge Hawkins in her self-report told the commission she never touched the employee, the two were "fairly friendly," and "described her actions as engaging in 'jest.'" However, the FJQC found her characterization to be misleading, causing the panel to be concerned by her misrepresentation. 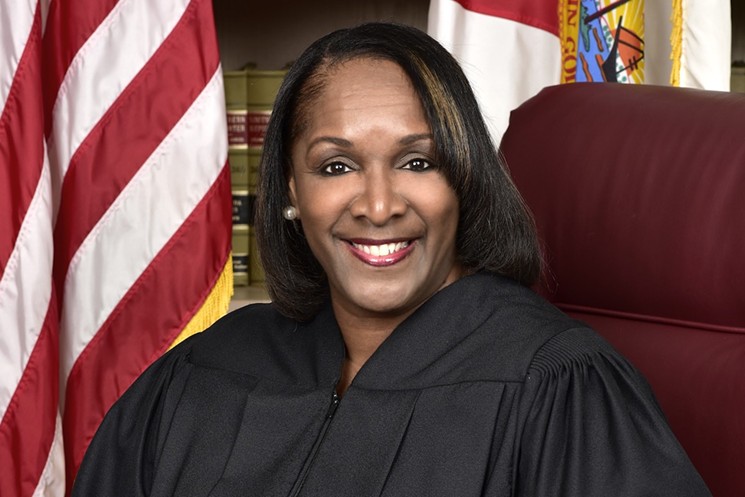 Broward County Circuit Judge Vegina "Gina" Hawkins
Seventeenth Judicial Circuit of Florida
"[Hawkins' statement] is clearly refuted by the security video, which Judge Hawkins watched prior to submitting her self-report. The employee did not describe the judge's demeanor that morning as friendly or joking, but  'extremely upset,'" the commission wrote. "Another employee who interacted with Judge Hawkins shortly after the incident says Judge Hawkins remarked about the encounter and demonstrated what she did by making a choking motion in the air."

Eventually, Hawkins admitted to the panel she "touched and shook the employee." But when members asked her why she failed to say that in the self-report, the judge said that "when she watched the video prior to writing the self-report, it was 'grainy,' she was crying, and she didn't remember putting her hands on the person."

"Within the judicial branch, as in civilian life, it is never appropriate for a person in a supervisory position to put their hands around the neck of an employee or subordinate and shake them," the filing says. "It is all the more inappropriate, and potentially criminal, when such conduct is motivated by anger or to emphasize displeasure."

Now, Judge Hawkins' fate lies with the Florida Supreme Court, which in the coming months will make a decision regarding her behavior.

Just a day after the FJQC issued its recommendation, the Florida Supreme Court suspended Hawkins without pay on Friday, July 19.
KEEP NEW TIMES BROWARD-PALM BEACH FREE... Since we started New Times Broward-Palm Beach, it has been defined as the free, independent voice of South Florida, and we'd like to keep it that way. With local media under siege, it's more important than ever for us to rally support behind funding our local journalism. You can help by participating in our "I Support" program, allowing us to keep offering readers access to our incisive coverage of local news, food and culture with no paywalls.
Make a one-time donation today for as little as $1.