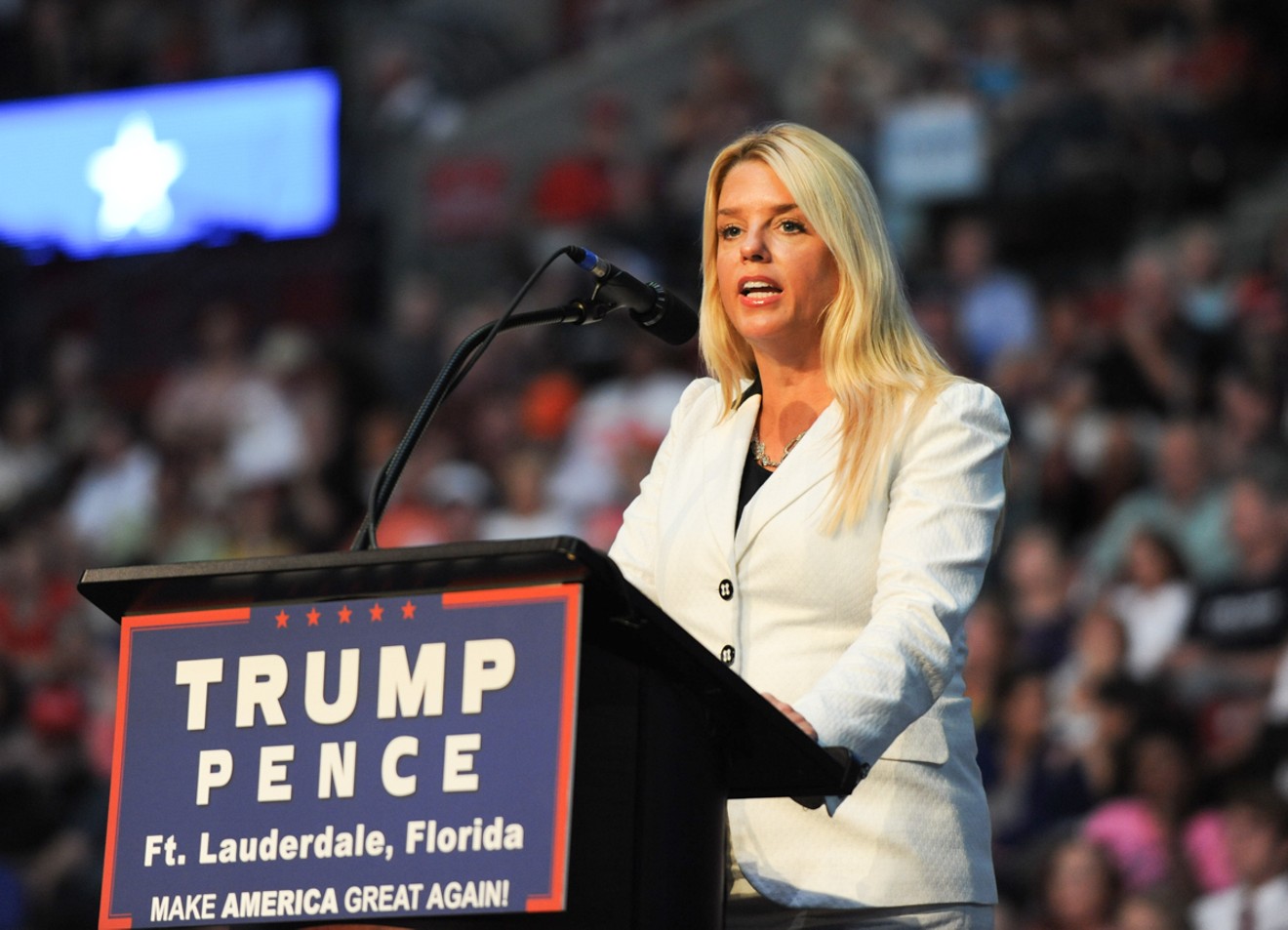 Pam Bondi Photo by Michele Eve Sandberg
Florida Attorney General Pam Bondi was recently confronted by protesters at a Tampa showing of the Mr. Rogers documentary Won’t You Be My Neighbor? The activists questioned her outside the Tampa Theater about her recent actions on health care policy and her stance on immigration.

In February, she joined a lawsuit against the Affordable Care Act, which was seen by many progressives as a threat to people with pre-existing conditions covered under the law. She's allied herself with President Donald Trump, whose "zero tolerance" policy has separated refugee families at the border and caused a national uproar. But this isn’t the first time she’s been in the news for her controversial policies. Here are the top ten times Bondi made news for the wrong reasons.

1. She wouldn’t let a lesbian couple divorce. Back in 2014, the Florida attorney general filed papers in Broward County Circuit Court, saying that Palm Beach resident Heather Brassner and her former partner, Megan Lade, should not be granted a petition for divorce. The couple had been joined together in a civil union in Vermont back in 2002. Brassner, 41, had been seeking to file for divorce in absentia after the couple split up and Lade disappeared. Her main reason for seeking divorce was security, so that Lade couldn’t resurface and try to come after her financially. Brassner sought basic marriage rights afforded to straight, divorced couples. Bondi wouldn’t have it. She argued a civil union is not the same thing as a marriage, and argued the ban on same-sex marriage could not be declared unconstitutional.

2. Scientologists hosted a fundraiser for her. The controversial religious organization has some big-time supporters of the attorney general. The event was hosted in Clearwater back in 2014, and it cost $1,000 to enter. But guests had to prepare to be audited at the door. Not IRS audited — Scientology audited. The Tampa Bay Times wrote: “Bondi is aware Scientologists are staging the event, said campaign spokeswoman Christina Johnson. She said Bondi first connected with Scientologists in 2010 when she and other elected officials toured some of the church’s Clearwater facilities. Bondi then spoke to a group of Scientologists about human trafficking and the evils of pill mills, a topic that resonated because Scientologists sponsor what they tout as the largest anti-drug program in the world.”

3. Trump made a $25K contribution to her campaign, sparking ethics complaints. The contribution was made stranger by the fact that Bondi’s office in 2013 was reviewing whether to join a suit investigating the shady online “Trump University.” She maintained she wasn’t aware of complaints filed against Trump’s companies when she solicited the money, even though her office told the Orlando Sentinel it would consider joining the New York Attorney General’s office to look into the complaints three days before Trump’s check came in. Bondi was the most prominent Florida politician to endorse Trump before the Florida primary and continued to work closely with the Trump campaign as a surrogate.

4. She sued President Obama over immigration. Bondi became the 18th Republican state attorney general to join a lawsuit against President Barack Obama over his immigration executive order. She told the Miami Herald, “This lawsuit is not about immigration, rather this lawsuit is about President Obama — yet again — overstepping the power granted to him by our United States Constitution.” But she more or less copy and pasted the actual text of the suit filed by Texas Attorney General Greg Abbot. “This lawsuit is not about immigration,” he wrote. “It is about the role of law, presidential power, and the structural limits of the U.S. Constitution.”

5. She released a bizarre campaign ad that didn’t mention same-sex marriage or medical marijuana. The ad touted her record of shutting down pill mills and banning synthetic forms of heroin and acid. It takes place on an urban street and features uniformed officers walking about and an awkward smile on her part. The weird part is, she made no mention of same-sex marriage and medical marijuana, which turned out to be the defining legal issues facing Florida. Perhaps there's a reason she didn't want to mention them: she's been on the wrong side of history on both issues, vehemently opposing legalization.
6. She wants young adults to be able to buy guns in Florida. In 2013, the NRA led an effort to reverse a law that restricts 18-to-20-year-olds from buying handguns and handgun ammunition from licensed firearms dealers. Bondi hopped onto the bandwagon and joined Alabama Attorney General Luther Strange in advocating for the NRA's position. Florida and 20 other states signed a brief supporting the NRA’s quest to have a federal court strike down the law.

7. She got an execution rescheduled so she could hold a fundraiser. The state was set to execute Marshall Lee Gore in 2018 for the 1998 rape, strangling, and stabbing of 30-year-old Robyn Novick. He then killed 19-year-old Susan Roark months later. But Rick Scott postponed the execution because it got in the way of Bondi's reelection kickoff. The postponement came at Bondi’s request, which upset the family members of Gore’s victims. And, funnily enough, Bondi is notorious for cracking down on attorneys delaying executions. She’s a strong proponent of the “Timely Justice Act,” which was designed to get through legal red tape and delays and execute inmates more quickly.

8. She called for authorities to “lock up” Hillary Clinton. When she spoke at the Republican National Convention in 2016, she was facing ethics complaints after news broke that Donald Trump had made a $25,000 donation to her campaign before she dropped an investigation into fraud complaints against his private university. And she also looked into the crowd and with a straight face said “God Bless the Trump family!” and demanded the government throw Hillary Clinton in prison.

9. She’s faced criticism for attacking same-sex marriage despite being married three times. Bondi used the typical arguments against same-sex marriage, dubbing it non traditional and saying it tainted the sanctity of marriage. But she’s now been traditionally married and traditionally divorced twice. And for a while in 2012, she was traditionally engaged to be traditionally hitched a third time, though it never panned out. She flew around 70 guests to the Ritz-Carlton Grand Cayman in the Cayman Islands to celebrate with then-fiancé Greg Henderson, but it was over by 2015.

10. She once handed a Daily Show reporter a cup of her “urine” (though it was a prank). After Daily Show correspondent Aasif Mandvi asked Gov. Rick Scott for a cup of his urine in response to the TANF drug test bill, Bondi heard she might be the next target. She came prepared. When asked on the show, she said: “Wow. That’s very interesting. Well, that’s very interesting that you should say that. Because as attorney general, I’m always prepared.” She then handed Mandvi a supposed urine sample. It turned out to be apple juice. She was one step ahead of the political pranksters.
KEEP NEW TIMES BROWARD-PALM BEACH FREE... Since we started New Times Broward-Palm Beach, it has been defined as the free, independent voice of South Florida, and we'd like to keep it that way. With local media under siege, it's more important than ever for us to rally support behind funding our local journalism. You can help by participating in our "I Support" program, allowing us to keep offering readers access to our incisive coverage of local news, food and culture with no paywalls.
Make a one-time donation today for as little as $1.