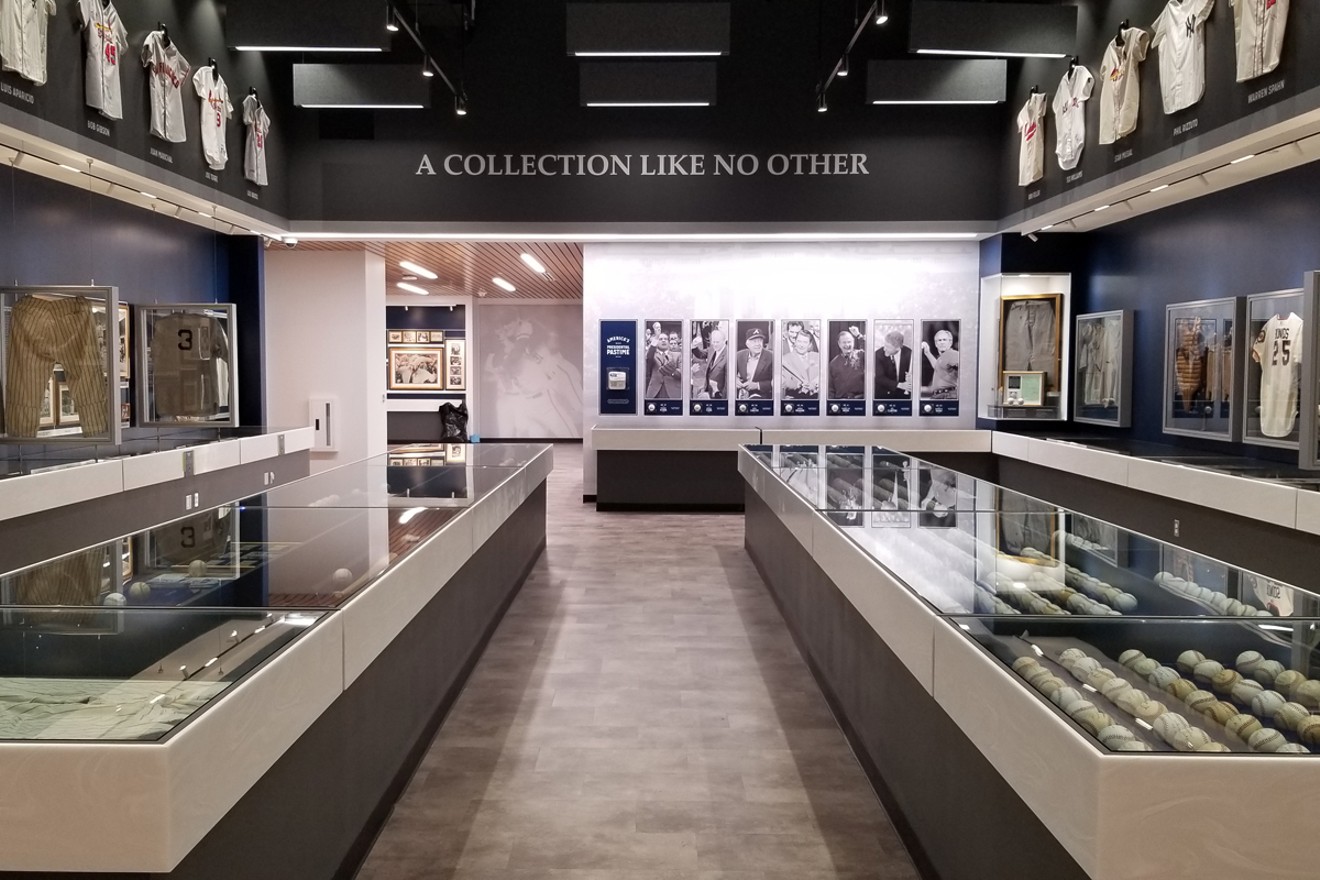 FAU officials, accompanied by the collection's donor, former Kansas City Royals owner and longtime Boca Raton resident Avron Fogelman, announced the center opening Tuesday. A private preview reception is set for Friday and the museum will open to the public on February 18. The collection is widely considered one of the largest private libraries owned by an individual.

An array of Olympic torches are on display as you enter, including torches from the 1936 Berlin Games, 1948 London Olympics, and the Munich Games in 1972, marking significant moments that impacted the games, its athletes and the world. In another display, World War II is illustrated using game-worn pants from baseball player and spy Moe Berg.

The collection also has Babe Ruth’s 1921 Opening Day game-worn pants, James Naismith's original 13 rules for basketball, pieces from Muhammad Ali, a 1930s-era football signed by Jim Thorpe, a ball signed by the undefeated 1972 Miami Dolphins, and a pair of the late Kobe Bryant’s autographed sneakers and a jersey from his rookie season.

Interactive displays include a recording of Fogelman’s phone call with President Ronald Reagan after the Royals won the World Series in 1985.

Filling a 3,500-square-foot space, the center holds roughly 1,200 pieces, which cumulatively show a quite visual — and often touchingly personal — progression of American sports and athletes alongside vignettes of the country’s growth.

“Sports are so engrained in our identity that a great deal of our collective history could be shared through famous athletic moments,” Fogelman says.

What would you do if you found yourself suddenly living the same day over and over again? I would lose my mind. This weekend, Slow Burn Theatre Company will stage Groundhog Day — The Musical at the Broward Center now through February 16. The musical is inspired by the 1993 movie starring Bill Murray, who as Connors is a weatherman covering Punxsutawney, Pennsylvania's banal annual ritual of watching whether a groundhog will "signal" an early spring or a longer winter. Jaded and contemptful, Connors somehow finds himself in a time warp, waking up each morning to yet another February 2. His attempts to figure out what's going on and what to do about it ... SPOILER ALERT! Though you can count on a song every step of the way. 7:30 p.m., Friday, January 31 (and varied times through February 16), Broward Center for the Performing Arts, 201 SW Fifth Ave., Fort Lauderdale; browardcenter.org. Tickets range from $49 to $65.

Saturday's The Night Before concert — the night before Super Bowl Sunday, duh — brings folks together at the BB&T Center in Sunrise for an evening filled with music from the Zac Brown Band. The multi-platinum Grammy Award-winning band plan to rock the house with its brand of country music. Opening for Zac Brown is Carly Pearce, the 2019 CMA award winner for New Artist of the Year and one of country's fastest rising stars. The 29-year-old Nashville native scored No. 1 hits with “Every Little Thing," "If My Name Was Whiskey," and “Hide the Wine” from her debut album, Every Little Thing, and is set to release self-titled second album on Valentine's Day. 8 p.m., Saturday, February 1, BB&T Center, 1 Panther Parkway, Sunrise; thebbtcenter.com. Tickets cost $20.50 via ticketmaster.com.

The Boca Raton Museum of Art is having its 34th annual Art Festival at Mizner Park this weekend, with more than 160 artist from across the country displaying their work. Mediums include ceramics, wood, fiber, glass, drawing, painting, jewelry, photography, and sculpture. Admission is free, and a lovely perk is that festival-goers will get free admission to the museum. This is the perfect opportunity to see the current exhibits, featuring artists Clifford Ross, Maren Hassinger, and Phyllis Galembo. The annual festival is one of the longest running and most prestigious juried art festivals in Florida. 10 a.m. to 6 p.m., Saturday, February 1 and Sunday, February 2 at Mizner Park, 501 Plaza Real, Boca Raton; bocamuseum.org. Free admission.
KEEP NEW TIMES BROWARD-PALM BEACH FREE... Since we started New Times Broward-Palm Beach, it has been defined as the free, independent voice of South Florida, and we'd like to keep it that way. With local media under siege, it's more important than ever for us to rally support behind funding our local journalism. You can help by participating in our "I Support" program, allowing us to keep offering readers access to our incisive coverage of local news, food and culture with no paywalls.
Make a one-time donation today for as little as $1.