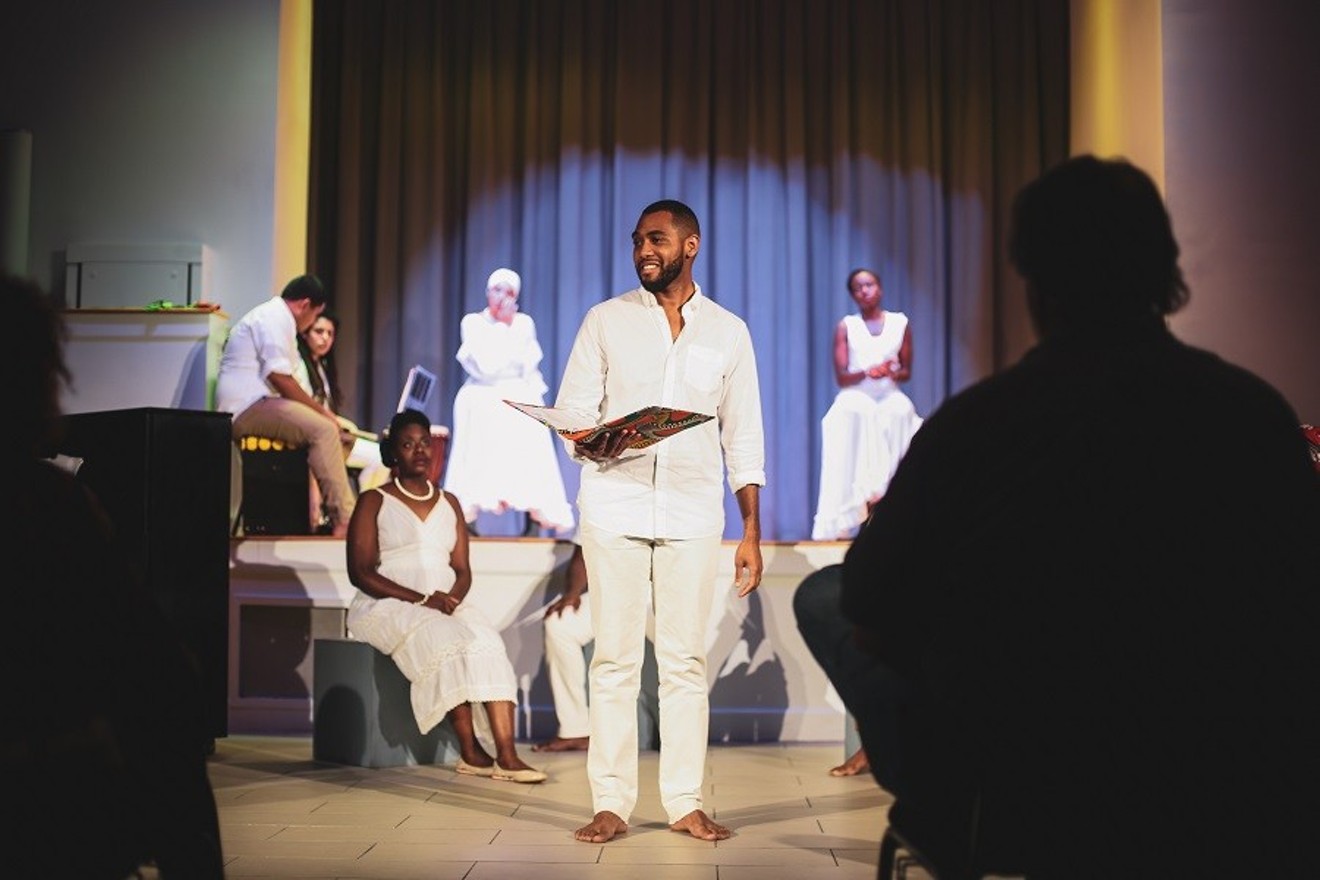 Kunya Rowley is the artistic director of Hued Songs, which began after receiving initial funding from the Knight Foundation. In 2018, Hued Songs presented Spirituals & Òrì?às at the Overtown Performing Arts Center. Photo courtesy of Hued Songs
Since joining the John S. and James L. Knight Foundation in 2016, program officer Adam Ganuza has reviewed more than 11,000 proposals from artists vying for its Arts Challenge.

There are three rules to apply: The idea must be about the arts; the project must take place in, or benefit, South Florida; and awardees must match the Knight Foundation’s commitment.

The process starts simply, Ganuza says, with a 150-word proposal: “Just 150 words, which doesn’t require a massive investment of energy to submit.”

Then, if the submission is accepted to move forward, prospective awardees are asked to write a full proposal.

Ganuza recalls being on the other side of this process. When he was production director of Miami Beach’s the Rhythm Foundation, more than $100,000 in Knight funds helped expand its Big Night in Little Haiti concert series.

“The very first grant that I successfully received as a grant writer was the Knight Arts Challenge program,” he says. “I didn’t know anything about grants or nonprofit funding before being exposed to the Arts Challenge.

“Now, becoming the administrator of the Challenge, it’s all gone full circle.”

The biennial granting initiative this year will award $2 million to finance ideas from creatives in Miami-Dade, Monroe, and Broward counties. Applications may be submitted at the Knight Foundation’s website from July 1 through 11:59 p.m. July 31.

Kunya C. Rowley, an opera singer and actor, says it was never a dream of his to start an organization, but the kickstart of a $20,000 award in 2017 for his proposal, “Hued Songs of Strength and Freedom,” led to Hued Songs becoming a full-fledged organization. Incorporated in 2019, it is now a Florida nonprofit.

His proposal idea was to create a concert series of works by African-American composers. What spurred him to take the first step into uncharted waters of applying for a grant was the feeling of accessibility, he says.

“Very often, as artists, there is no one soliciting our ideas, especially as performing artists. Then, here’s this platform that says, ‘Tell us about your idea around arts and our community and what you would build if you had the opportunity,’ ” Rowley says.

Now, with a stated mission, Rowley said Hued Songs amplifies the work of Black and Brown artists: “It is a platform where they can be seen, heard, and paid.”

For many recipients, the Knight Arts Challenge is their first grant, Ganuza says.

“In that way, it’s a bit of a gateway grant — an opportunity for people to engage with philanthropy in a way that has a relatively low barrier,” he says.

The basic through-line since the Knight Arts Challenge began in 2008 has been: “What’s your best idea for the arts?” However, this year’s challenge has an added caveat.

Since artists and arts organizations had to adapt in many ways due to the pandemic, the foundation is interested in how they are leveraging technology to attract audiences and enhance in-person experiences.

“COVID-19 has been a major disrupter in every aspect of our lives, particularly in the arts and culture sector,” Ganuza says. “There aren’t many silver linings about this past year and a half, but there are a few lessons that artists have learned around how it is that they can create and present art in novel ways.”

The Knight Foundation wants to “support those organizations and artists that are helping to show the way forward as cities reopen,” he adds. “We want to encourage them to embrace these new forms of expression that mirror the way that audiences are now engaging in art.”

“The list goes on,” according to Ganuza. “There’s no project that’s too big or too small. The message is that if you have a great idea, the Knight Arts Challenge wants to know about it.”

To submit an idea for the 2021 Knight Arts Challenge, visit knightfoundation.org.

– Michelle F. Solomon, ArtburstMiami.com
KEEP NEW TIMES BROWARD-PALM BEACH FREE... Since we started New Times Broward-Palm Beach, it has been defined as the free, independent voice of South Florida, and we'd like to keep it that way. With local media under siege, it's more important than ever for us to rally support behind funding our local journalism. You can help by participating in our "I Support" program, allowing us to keep offering readers access to our incisive coverage of local news, food and culture with no paywalls.
Make a one-time donation today for as little as $1.