Miami artist Danny Brito says global fashion brand Shein copied his design for a vinyl sticker without crediting him. Photo courtesy of Danny Brito
What do you do when a global fast-fashion brand with a reputation for questionable business practices appears to have lifted one of your designs and put it up for sale?

Probably a lot of internal screaming.

Miami artist Danny Brito was shocked to receive an Instagram direct message this Wednesday informing him that the online storefront Shein, known for its popularity on TikTok, was hawking a vinyl sticker identical in design to one Brito created in 2018 — a yellow caption that reads "SCREAMING INTERNALLY," which Brito sells on Etsy for $8 a pop — for $1.

"I’ve had my work ripped off by factories in China before, and when I looked on their site, sure enough, there it was," Brito tells New Times. "It had over 2,000 reviews, which means over 2,000 bought it from them."

Brito immediately messaged the copyright inbox for Shein, showing proof of his original design from 2018 and the exact duplicate on the company's website.

Shein, a Chinese company founded in Nanjing in 2008, has an unfortunate track record of copying designs from smaller artists and mass-producing them without credit. Because of the company's fast-fashion business model and an online storefront that releases a constant stream of new products, some say idea theft has become par for the course for the brand.

When Brito failed to receive a response from Shein, he took to social media to draw attention to his plight.

"The only way for a company to notice little old me is to have a lot of eyes see what's happening," the artist explains.


Shein got me gals, they copied my decal design I made in 2018. @SHEIN_official pic.twitter.com/DTch2G0NwS

On Twitter and Instagram, Brito received dozens of comments from fellow creators who alleged similar scenarios in which Shein copied their work, thus siphoning off hard-earned revenue.

One artist, Sarah Eckett, commented: "Shein probably owes me and THOUSANDS of other small businesses thousands of dollars. They SUCK."

While Brito never received a personal response from Shein, another user sent him a screenshot of the Shein U.S. Instagram page saying they'd removed the sticker from their storefronts.

"Hello, SHEIN holds every designer's copyright should be respected. We have removed the item from all sites. Thanks for your attention," reads the comment, responding to a post that said, "Stop stealing peoples art, thanks." 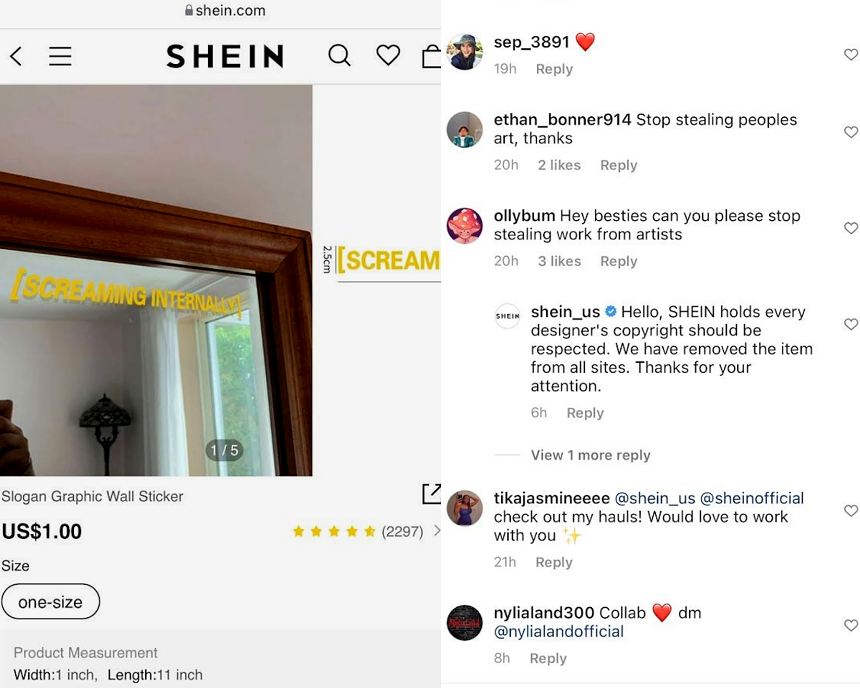 Left: The online storefront Shein was selling a sticker design identical to Brito's for $1.Right: Shein's official Instagram page responded to a commenter, saying it had taken down the product.
Screenshots courtesy of Danny Brito
As of Thursday morning, Brito's sticker design cannot be found on Shein's website.

A link for a "Slogan Graphic Wall Sticker" on US.Shein.com with a photo of the "SCREAMING INTERNALLY" sticker still comes via a Google search, though clicking the link leads to an error page.

Though his sticker has been purged from the website, Brito isn't satisfied. He still hasn't received any direct response from the company nor any compensation for the alleged theft of his design.

"It's insulting to me that they reply to other people in comments but I haven't received a personal email or even a DM. I need a formal apology and compensation. I'm self-employed," Brito says.

Shein did not respond to New Times' request for comment.

Back in 2014, another Miami artist, Ahol Sniffs Glue, found himself in a similar situation, when mall mainstay American Eagle used his imagery in an advertising campaign. The artist sued the brand for copyright infringement, leading to a confidential settlement.
KEEP NEW TIMES BROWARD-PALM BEACH FREE... Since we started New Times Broward-Palm Beach, it has been defined as the free, independent voice of South Florida, and we'd like to keep it that way. With local media under siege, it's more important than ever for us to rally support behind funding our local journalism. You can help by participating in our "I Support" program, allowing us to keep offering readers access to our incisive coverage of local news, food and culture with no paywalls.
Make a one-time donation today for as little as $1.