Beck's giant paper airplane, carried by a crane. Courtesy of JMKPR
Last Tuesday, Jerry Beck, a South Florida native and the founder and artistic director of the Revolving Museum, attempted to fly what is believed to be the world’s largest paper plane at Fitchburg Municipal Airport in Massachusetts. But years of conceptualizing, community organizing, and sourcing artwork to plaster on the exterior of the 64-foot paper plane weren’t enough to override the relentless physics required for flight and make the Guinness World Records.

“The limiting aspect was the width of the wings on the plane. This became evident more and more as we started working with pilots, the Air Force, and aeronautical engineers... They humbled me," says. "They appreciated my passion, but [it was possible] that the plane would come straight down. And even though it was made of cardboard, at 1,000 pounds, it could hit the window [of the truck pulling it], smash it to pieces, and I could be killed.”

“I still wanted to do it and I didn’t want to disappoint, but everyone [said], ‘You got 5,000 to 6,000 pieces of artwork. There are thousands of people here. It’s more important that you deal with the original idea to make great public artwork. Let them experience the beautiful content and artwork on this thing.' It’s nice that nothing unsafe would happen.” 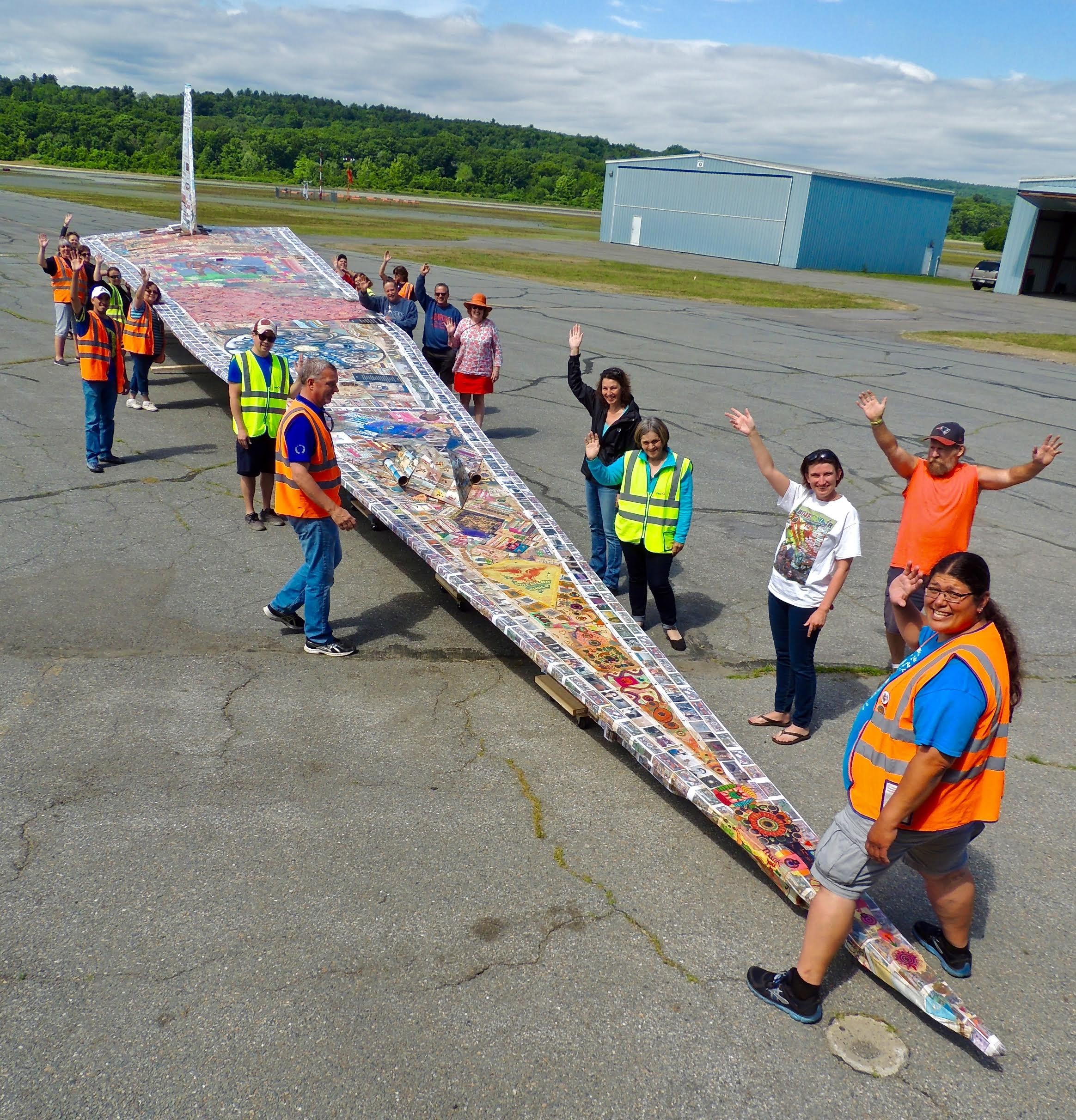 Students pose with the massive aircraft.
Courtesy of the Revolving Museum
Though the paper plane didn't go airborne this time, the project isn't any less meaningful for Beck both personally and politically.

His 12-year-old daughter was the one who inspired the idea to create the gargantuan paper plane, titled Project Soar. “The project started when my daughter came home from school, where she was making paper airplanes," Beck says. "She threw one in the house, and it almost hit me right in the eye when I wasn’t looking... [I thought of] how cool it was to take a simple sheet of paper and create something to fly a distance and can be embellished with design.”

Beck, who still has family in Hollywood, referenced political issues in South Florida in some of the art that collaged the surface of Project Soar. “There are lots of teachers coping with the recent violence [at Marjory Stoneman Douglas High School]. We’ve all been dealing with that, and now it has become a youth revolution, which has been unbelievably exciting,” says Beck, who collaborated with students at Fitchburg High School to create art.

Detail of Project Soar.
Courtesy of the Revolving Museum
“The kids came up with the idea of using sandpaper. This is a paper that can sand away and eliminate things like graffiti, swastikas, and things written in the bathroom that are racist and sexist. Sandpapers come in many different colors, and they did paintings with sandpaper about their message against eliminating bullying and violence. That was very powerful.”

Beck says he’s working toward making another attempt to fly the paper airplane. But he also plans to bring another version of the project to Miami next summer.

“Because all of our work [with the Revolving Museum] is site-specific, we are focusing on the coral reefs in Hollywood and Miami Shores. There will be a paper airplane sinking vessel that will have baby corals attached to it. These baby corals will be sunken into the water to repopulate," he explains. "People get extremely excited and elated about the connection between art making, aviation, and science.”
KEEP NEW TIMES BROWARD-PALM BEACH FREE... Since we started New Times Broward-Palm Beach, it has been defined as the free, independent voice of South Florida, and we'd like to keep it that way. With local media under siege, it's more important than ever for us to rally support behind funding our local journalism. You can help by participating in our "I Support" program, allowing us to keep offering readers access to our incisive coverage of local news, food and culture with no paywalls.
Make a one-time donation today for as little as $1.